Many quotes from films have entered common usage, usually for comic effect. The following are noteworthy because they represent some aspect of society and the human condition. With thanks to the American Film Institute’s list of 100 Movie Quotes. 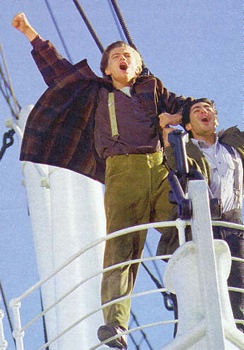 Jack wins a voyage on the luxury liner in a card game and boards as a Third Class passenger. He can’t believe his luck and stands proudly at the prow of the ship and throws out his arms, declaring he’s the King of the world. He captures the heart of socialite Rose (Kate Winslet), who prefers the partying on the Third Class deck to the stuffy atmosphere of First Class. Together, they must combat Rose’s caddish fiancé, not to mention a certain iceberg that is lurking in the Atlantic. 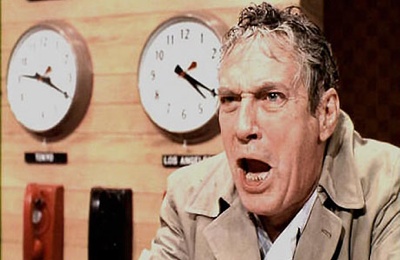 The Quote: I’m as Mad as Hell and I’m Not Going to Take This Anymore
Said By: Peter Finch as Howard Beale
Demonstrates: Nervous Breakdown

News anchorman Howard Beale (Peter Finch) is fired following deteriorating ratings. The network allows him back on and he astonishes everyone with his rants on modern life, culminating in his famous speech, urging the audience to express their anger by shouting out of their windows that they’re not going to take it anymore. Beale becomes a hero, as he explores the isolation of people, and society’s attempts to pacify them with consumer goods. He is clearly not well but the network cynically exploits the situation as the ratings soar. Finch won the Oscar for Best Actor (posthumously) and was ably supported by William Holden and Faye Dunaway. 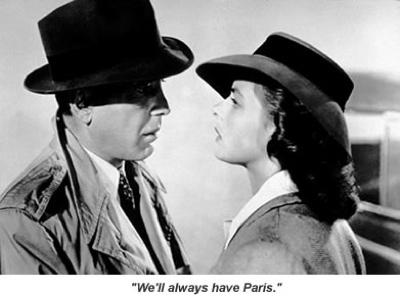 There are several famous quotes to choose from but none so heartrending as this one, when Rick persuades Ilsa (Ingrid Bergman) to get on the plane with her husband, Victor (Paul Henreid). Set in WWII, Casablanca is controlled by the Vichy and Rick tries to stay politically and emotionally neutral. Then, the former love of his life, now married, walks into his café. Ilsa has already broken his heart, leaving him bitter, but she melts him again. It takes all his strength of character to tell Ilsa to do the right thing and stick by her husband. Paris is where Rick and Ilsa had been happy during their previous romance. The wartime story has the benefit of Claude Rains, Sydney Greenstreet, and Peter Lorre in support but it’s the romance that is the heart of the movie. For doomed lovers everywhere, they know what it means to always have Paris. 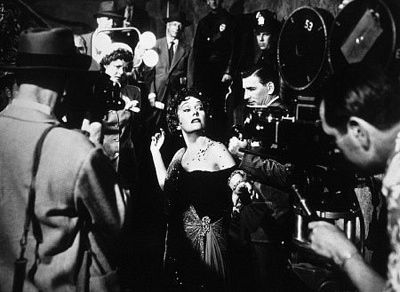 The Quote: You Used to be Big (reply: I Am Big. It’s the Pictures That Got Small)
Said By: Gloria Swanson as Norma Desmond
Demonstrates: Faded Star

It was inspired casting to place Gloria Swanson, a star in silent films, in the role of Norma. There were parallels between the actress and the character, as both were movie icons no longer wanted in movies, although Swanson had moved on to television roles. Beautifully shot in a film noir style, Norma is a mentally unstable recluse who desperately wants to resurrect her career. When she hooks up with Joe Gillis (William Holden), she asks him to help her. Joe, a struggling screenwriter, has problems of his own. This is a fascinating insight into the sad decline of a star and the dark arts practiced in Hollywood. 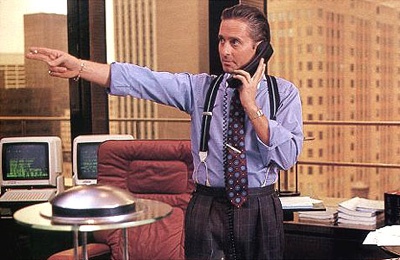 The Quote: Greed, for Lack of a Better Word, is Good
Said By: Michael Douglas as Gordon Gekko
Demonstrates: The Rise of the Yuppie

It was the perfect film for the ‘80s and gave birth to a modern villain, Gordon Gekko (Michael Douglas). Gekko is a speculator and uses inside information on companies to acquire his financial acumen. Charlie Sheen plays Bud Fox, a stockbroker who wants to get to the top. The ruthless Gekko is his role model and Gekko is only too happy to mentor him. This corporate greed and unethical behavior is in opposition to the working class values of Carl Fox (Martin Sheen), estranged father to Bud. The Greed is good quote became a mantra for some, either in admiration or as a morality tale. Gekko delivers a speech about the condition of corporate America to a packed room, telling his audience that greed is good, greed is right and greed will save the USA. 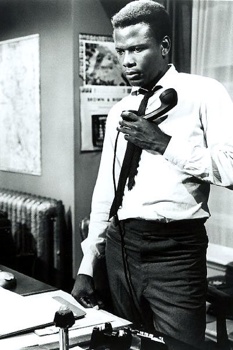 The Quote: They Call Me Mister Tibbs
Said By: Sidney Poitier as Virgil Tibbs
Demonstrates: Fight for Racial Equality

When a wealthy white man is murdered in a small Mississippi town, the sheriff, Bill Gillespie (Rod Steiger) is under pressure to charge someone. Along comes Virgil Tibbs, a black man carrying a lot of money. The racist Gillespie assumes he’s got his man, only to discover that Tibbs is a homicide detective from Philadelphia, passing through to visit his mother. When Tibbs’ captain wants him to stay to help with the investigation, Tibbs and Gillespie are reluctantly thrown together. This movie came out against the background of civil rights struggles in the 1960s. Poitier, as always, is superb and portrays the detective as a dignified and proud man. Gillespie asks him what they call him in his hometown and Tibbs shoots back that they call him Mister Tibbs. Gradually, as they work together, Gillespie’s prejudice gives way to respect for his colleague. 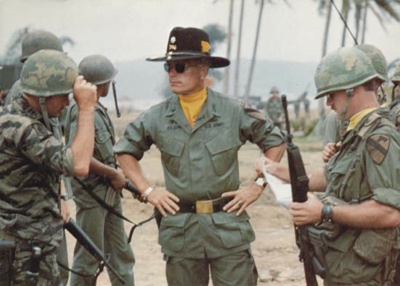 The Quote: I Love the Smell of Napalm in the Morning
Said By: Robert Duvall as Lt. Col. Bill Kilgore
Demonstrates: Dehumanization in War

The movie explores the horror of the Vietnam War and the main plot concerns Captain Willard (Martin Sheen) and his mission to assassinate Colonel Kurtz (Marlon Brando), a US Army officer who has gone AWOL and reportedly insane. Lieutenant Kilgore is a disturbing supporting character, an eccentric Helicopter Cavalry commander, whom you suspect doesn’t want the war to end. He’s enjoying himself too much, particularly when he launches an attack on a beach, simply because he wants to surf there. Cue Wagner’s ‘Ride of the Valkyries’. The cavalry also drops napalm on the jungle. Later, Kilgore is in a reflective mood, and declares his love of napalm because it smells like victory. 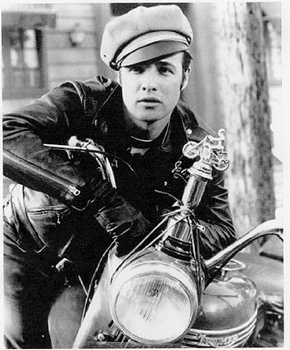 The Quote: What’re You Rebelling Against Johnny? (Johnny: Whaddya Got?)
Said By: Marlon Brando as Johnny Strabler
Demonstrates: Teenage Rebellion

Johnny, leader of the Black Rebel Motorcycles Club, is the epitome of cool with his black leather motorcycle jacket, sunglasses and peak cap. It seems tame by our standards now but this movie was banned in the UK until 1968! It’s a tale of youthful rebellion, although Brando was thirty years old when it came out. It influenced James Dean and numerous anti-heroes that followed. The gang rides into a small town and comes into conflict with the local townsfolk and a rival motorcycle gang, The Beetles, led by Chino, played by Lee Marvin. The Sheriff’s daughter falls for Johnny’s charms. When a young blonde asks him what he’s rebelling against, he gives the perfect answer. 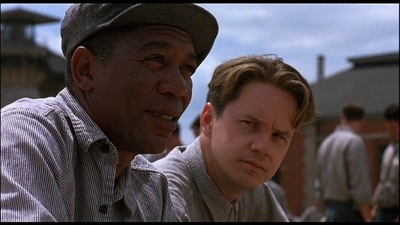 The Quote: Andy Dufresne – who crawled through a river of shit and came out clean on the other side
Said By: Morgan Freeman as Red Redding (narrating)
Demonstrates: Indomitable Spirit

Based on a Stephen King novella, it’s the story of a banker named Andy (Tim Robbins) who is mistakenly found guilty and given two life sentences for the murder of his wife and her lover. He must adapt to the harsh world of the Shawshank gaol. The prison ‘fixer’, Red, befriends him and the two inmates forge a close bond. Morgan Freeman, as Red, is also the narrator. Hope and patience are the themes as Andy refuses to be crushed by the system and spends years planning his eventual escape. The river of shit is the sewage pipe that he crawls through to freedom. 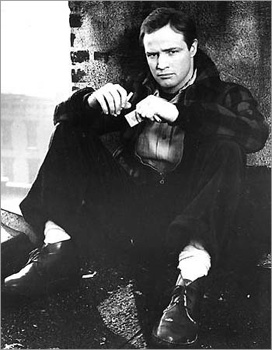 The Quote: I coulda had class. I coulda been a contender. I could’ve been somebody, instead of a bum, which is what I am.
Said By: Marlon Brando as Terry Malloy
Demonstrates: Wasted Life

The New Jersey docks were used as a location for this story about longshoremen. Johnny Friendly (Lee J. Cobb) is the corrupt dockworkers’ union leader. He controls the waterfront because everyone is afraid of him. Terry Malloy has information on Friendly that would put him behind bars, a situation complicated by the fact that Terry’s brother Charlie (Rod Steiger) is Friendly’s lawyer. Will Terry do the right thing? His promising career as a boxer had been curtailed because Friendly told Charlie to order Terry to take a fall in a fight because Friendly was betting on his opponent. The famous lines delivered to Charley are from a man who knows what he gave up. He tells Charlie that he should have looked out for him, as his brother.