In the past we have published four complete lists of mainstream conspiracy theories – a subject which is always popular. This time we are adding a list of theories that are held by a much smaller number of people (which, fortunately for us, results in some slightly more bizarre ideas). 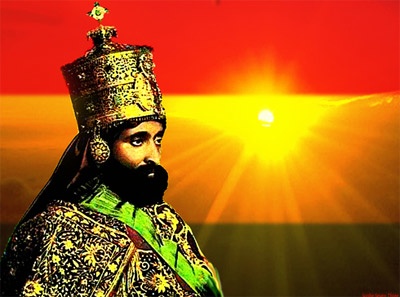 Some Rastafarians maintain that a white racist patriarchy (“Babylon”) controls the world in order to oppress the African race. They believe that Emperor Haile Selassie of Ethiopia did not die when it was reported in 1975, and that the racist, white media (again, “Babylon”) propagated that rumour in order to squash the Rastafari Movement and its message of overthrowing Babylon. Other Rastafarians, however, believe in peace and unity, and interpret Babylon as a metaphor for the established “system” that oppresses (or “downpresses,” in Rasta terminology) groups such as Africans and the world’s poor. 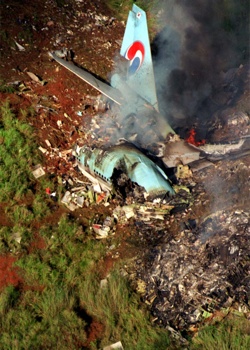 Korean Air Lines Flight 007 was a Korean Air Lines civilian airliner that was shot down by Soviet jet interceptors on September 1, 1983, over the Sea of Japan over prohibited Soviet airspace. The event has been the subject of ongoing controversy and has spawned a number of conspiracy theories, many of which are rooted in Cold War disinformation and propaganda campaigns, the suppression of evidence such as the flight data recorders and unexplained details such as the role of a USAF RC-135 surveillance aircraft. The various theories that have been put forward generally reflect their authors’ political orientations: Right-wing theories mirror the US government position in 1983, while left-wing theories reflect the Soviet position at the time. Some commentators also felt that the ICAO report failed to address key points adequately, such as the reason for the aircraft’s deviation. 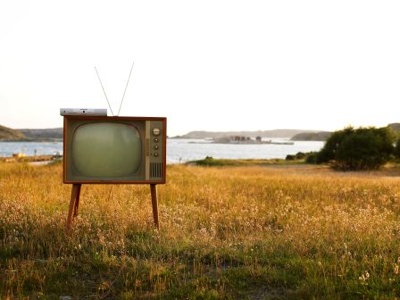 Some theorists claim that forced transition to Digital television broadcasting is practical realization of “Big Brother” concept. They claim that miniature cameras and microphones are built into Set-top boxes and newer TV sets to spy on people. Another claim describes use of mind control technology that would be hidden in the digital signal and used to subvert the mind and feelings of the people and for subliminal advertising. When you buy your Digital TV – be sure to check it out for hidden cameras! 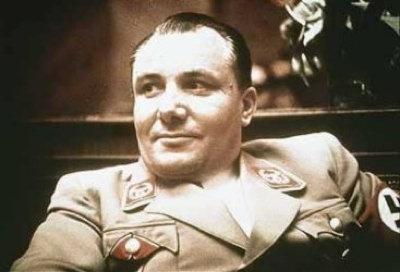 Martin Bormann (17 June 1900 – 2 May 1945?) was a prominent Nazi official. He became head of the Party Chancellery (Parteikanzlei) and private secretary to Adolf Hitler. He gained Hitler’s trust and derived immense power within the Third Reich by controlling access to the Führer and by regulating the orbits of those closest to him. After the war, Bormann was not found and was tried in absentia at Nuremberg. Unconfirmed sightings of Bormann were reported globally for two decades, particularly in Europe, Paraguay and elsewhere in South America. Some rumours claimed that Bormann had plastic surgery while on the run. At a 1967 press conference, Simon Wiesenthal asserted there was strong evidence that Bormann was alive and well in South America. Radio talk show host David Emory claims that Nazi leader Martin Bormann never died and has built a global empire involving, among many others, the Bush family, Hassan al Banna, Grover Norquist, Meyer Lansky, and Michael Chertoff.

6
Natural Quake or Not? 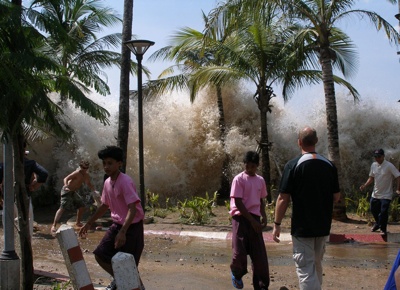 It has been speculated that the 2004 Indian Ocean Tsunami may have been caused intentionally by a “tsunami bomb” – a nuclear weapon detonated in a strategic position under the ocean. Some reason that the technology is at least feasible since research into such technology has been conducted by the military as far back as World War II. According to declassified files, top-secret “tsunami bomb” experiments utilizing explosions to trigger “mini-tidal waves” were conducted off the coast of New Zealand in 1944 and 1945. The U.S. Defense Department had even expressed concern about earthquake-inducing technology in warfare well before the 2004 disaster. In 1997 Defense Secretary William S. Cohen stated, “Others are engaging even in an eco-type of terrorism whereby they can alter the climate, set off earthquakes, volcanoes remotely through the use of electromagnetic waves. So there are plenty of ingenious minds out there that are at work finding ways in which they can wreak terror upon other nations. It’s real, and that’s the reason why we have to intensify our efforts, and that’s why this is so important.” 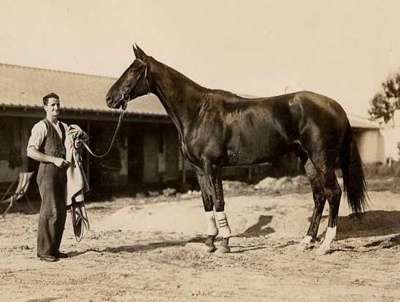 Phar Lap (1926–1932) was a champion New Zealand Thoroughbred racehorse whose achievements captured the public’s imagination during the early years of the Great Depression. Foaled in New Zealand, he was trained and raced in Australia. Phar Lap dominated Australian racing during a distinguished career, winning a Melbourne Cup, two Cox Plates and 19 other weight for age races. Early on 5 April 1932, the horse’s strapper for the North American visit, Tommy Woodcock, found him in severe pain and having a high temperature. Within a few hours, Phar Lap hemorrhaged to death. Much speculation ensued, and when a necropsy revealed that the horse’s stomach and intestines were inflamed, many believed the horse had been deliberately poisoned. However, in 2006 Australian Synchrotron Research scientists said it was almost certain Phar Lap was poisoned with a large single dose of arsenic in the hours before he died, perhaps supporting the theory that Phar Lap was killed on the orders of U.S. gangsters, who feared the Melbourne-Cup-winning champion would inflict big losses on their illegal bookmakers.

4
Rome is the Seat of the Antichrist 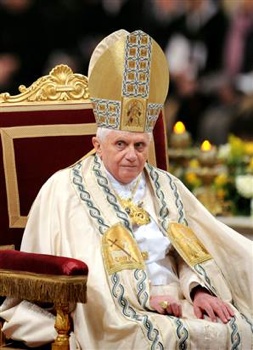 This theory is restricted almost entirely to various fundamental Christian protestant groups in the United States. The theory posits that the Vatican (through the Pope) is the antichrist and that its sole function in society is to destroy it. All of the evidence given in support of this theory is easily disproven by basic scholarship. Interestingly, even many Catholics believe that one day Rome will become the seat of the antichrist as part of the lead up to the end times and final judgement in part due to the apparitions of the Virgin Mary to two children in La Salette, France in 1846. One of the seers said that the Virgin Mary said: “Rome will lose the Faith and become the seat of the Antichrist.” The Vatican has declared that the apparitions at La Salette are worthy of belief (this means that Catholics are free to believe or not believe the apparitions). [More] 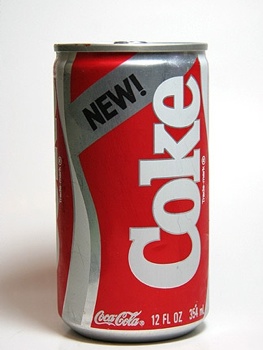 One of the many conspiracy theories relating to the Coca-Cola Company is that it intentionally changed to an inferior formula with New Coke with the intent of driving up demand for their classic product, later reintroducing it for their financial gain. Alternatively, people believe the switch was made to allow Coca-Cola to reintroduce “classic” Coke with a new formulation using less expensive corn syrup. Working against this theory is the fact that New Coke was introduced world-wide but it is only in North America that the re-established Classic Coke is made with corn-syrup (due to US government interventionist policies in the sugar industry); elsewhere, Classic Coke is made with sugar. 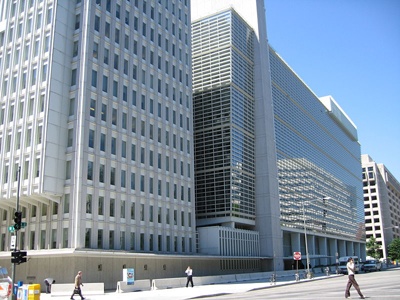 The New World Order (item one on this list) is said to control the wealth of nations through central banks, via the issuance of currency. The Federal Reserve System is the central bank of the United States, created in 1913. There is a theory that the Federal Reserve System is designed to transfer wealth from the poor and middle classes of the United States to the international bankers of the New World Order. Theorists also believe that the World Bank uses its power to control government policy around the world. In a recent bizarre twist, the Copenhagen global warming gathering tabled a document which would transfer all moneys gained from carbon taxes and emission trading schemes to the control of the World Bank. 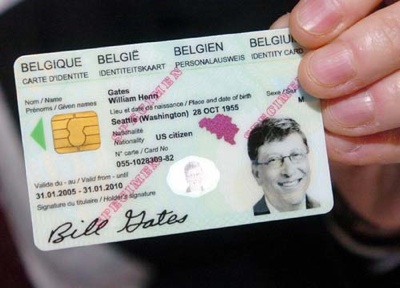 The Theory of Electronic Conspiracy is said to be a variant of modern New World Order conspiracy theories. The theory consists of the belief that a secret group has attempted for centuries to reach worldwide dominion, even if the result by design would be world destruction. According to this theory, the worldwide dominion has been planned from antiquity and follows the following phases:

1. The substitution of precious metal-based coin currency by paper currency. This process began in the Renaissance, with the beginning of the use of tickets which allowed for people to have a tangible good (such as silver or gold pieces) by paper—a more virtual, but comfortable, medium which the state was committed to provide the equivalent amount of precious metal if such was required.
2. The appearance of virtual money, with credit cards: money approaches wholly virtual status. Money is no longer a tangible paper- or metal-based object but rather a series of numbers recorded in magnetic stripes.
3. The proliferation of Internet and Electronic commerce: credit cards are no longer required in order to purchase or sell goods and services from an Internet-connected computer.
4. The concentration of the worldwide bank into few hands, by means of continuous international banking fusions.
5. The worldwide implementation of an electronic identity card.
6. The great worldwide blackout. A tremendous disaster will take place when, after a great electrical blackout on a planetary scale, the data of all electronic accounts erase simultaneously. After this event, chaos and poverty will immediately ensue throughout the planet; and civilization will revert to its primitive forms of slavery to survive. This is the last aim of the “secret organization” which has spent centuries guiding this process. The worldwide blackout will be preceded by partial blackouts that would only be tests and “signals” to communicate that different phases of the process are being fulfilled. An example of these partial blackouts would be those that have been produced almost simultaneously in different parts around the world; and, at the beginning of the 21st century, shortly after the September 11, 2001 attacks: the blackouts in the United States, Canada, Australia, and the United Kingdom.

10 Historical Figures Who Disappeared And Have Never Been Found