Today’s weapons of war are increasingly geared towards felling an enemy in as humane a way as possible, with high velocity firearms ensuring a quick death. Soldiers are also trained to kill enemies quickly and (well, almost) painlessly, with bladed side-arms. However, in times gone by, humane weapons were the last thing warriors were looking to wield. Pain and maximum suffering were the order of the day, and the popularity of a weapon could be measured by its brutality. For good reason, too! A weapon that scared the crap out of your enemy was a useful tool, as well as an empowering asset.

Let’s take a look at some of the more fearsome, and downright nasty, weapons employed by warriors of times gone by. In no particular order (I wouldn’t fancy encountering ANY of these!): 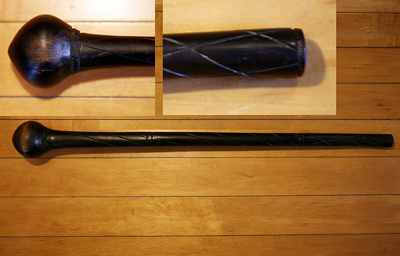 A knobkerrie refers to any blunt impact implement located at the end of a shaft weapon or staff. Usually a small ball of wood or metal, a knobkerrie would be used by being slammed into the nose or groin at close range. This type of weapon has been used in many different incarnations over time, but was originally used in Africa by tribal groups as a means of self defense. This weapon is still used today and can be found on the end of most hunting knives, in the form of a small ball or point of metal at the end of the handle.

Notable appearance: The Knobkerrie is employed by numerous Zulu warriors in the movie “Zulu”. 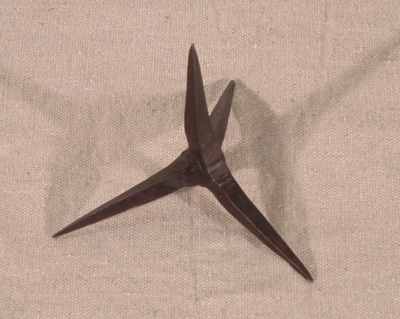 Most famously used in ninja movies, and the like, a caltrop (or caltrops) are objects with multiple sharp points, designed to be dropped when under pursuit, in order to either catch your pursuer off guard and cause nasty injury to the feet, or to force approaching enemies in to following a certain path as a trap. The primary idea behind these nasty implements is to be used as a trap which will render your foes immobile, or at least in great pain!

Notable appearance: Caltrops appear in a number of James Bond movies as a feature of Bond’s car, dropped from the vehicle to puncture the tires of pursuers.

The mace’s nastier cousin, the morning star, consists of a solid wooden or metal shaft atop which sits (in most designs) a large metal ball adorned with a number of spikes or blades. The morning star was used by infantry and horsemen, alike, in medieval times. The primary method of attack was to simply swing the weapon at your foe. The most common target was, logically, the face or head, although the blow could be directed at the legs or knees in order to disable a foe. Morning stars have returned in different forms since medieval times, and are often confused with the mace, the difference being that a mace has no spikes, instead favoring metal studs. Another form of this weapon is the well-known flail, which incorporates a chain between the shaft and spiked ball, allowing the weapon to be swung harder with less exertion.

Notable appearance: The Cave Troll appearing in The Lord of the Rings books and movies wields a huge Morning Star as his weapon of choice. 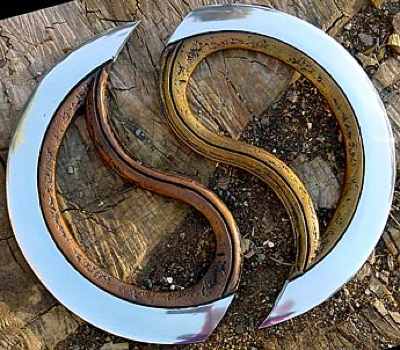 Often misidentified as a Glaive, which is actually a pole weapon similar to a pike, a Chakram is akin to a large throwing star (or shuriken). Also known as a war quoit, the weapon is of Indian origin and was usually a large bladed metal disk. Chakrams were used both for throwing, like a Frisbee, or in melee combat, where slashing was the usual method of attack. Another form of the Chakram was the Chakkar, another bladed throwing weapon in the shape of a hoop rather than a disk. Chakkars were used by Sikh warriors, again, as both a throwing and melee weapon. The weapons have a frightening range of up to 100 meters, if well manufactured. 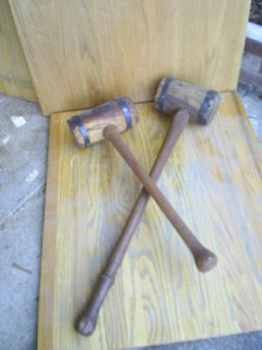 Similar to a modern sledgehammer, the Maul is a nasty blunt force weapon, initially appearing in use by French citizens. Mauls were not originally used particularly as a weapon, rather as tools, but in time they have been employed by various factions for combat purposes. There is no particular method for using a Maul, aside from striking almost anywhere on the body for severe damage. Common target areas would be (as is common with blunt force weapons) the head, arms or legs. A single blow from a Maul is sufficient to shatter bones and cave in skulls, even when a helmet is worn. The length of the handle allowed for the Maul to be wielded in two hands. A common tactic was to break the legs of the victim with a stout blow to the knees or shins, then finish the poor guy off with an over-head smash to the skull.

Notable appearance: Leatherface in the original Texas Chainsaw Massacre movie, uses a sledgehammer as a Maul to incapacitate one unlucky victim. 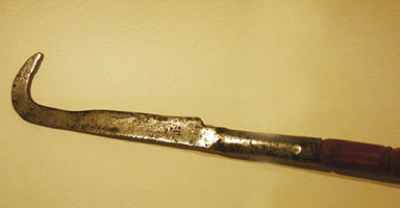 Adapted from the common farming tool, war scythes were altered so that the blade pointed straight from the top of the shaft. War scythes were used as both a slashing and a stabbing weapon, their weight and aerodynamic shape making them devastating. Capable of cutting through a metal helmet, the weapon is thought to have originated from use as an improvised weapon by peasants, which was then adapted for military use. Arguably worse than the military form, the version wielded by peasants in revolts would often be blunt from use in farming, meaning the victim was likely to survive numerous slashes before dying.

This nasty piece of kit was employed by Chinese warriors as a means of ensnaring and immobilizing a victim. The weapon consists of a metal head bearing two or more serrated hooks, attached to a length of rope or chain. Used by “casting” out the head, the aim was to pierce, or snag, a part of the foes body with one of the hooks, and then reel them in for the kill by pulling on the rope. This often resulted in tearing the victim’s body as they struggled to escape. Arterial damage was common and the victim was often killed by the hook itself, before they could be reeled in. The Dragon Beard Hook originates from the Song Dynasty. 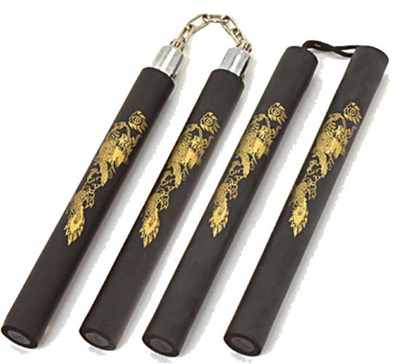 Originating as a tool for threshing crops, nunchaku are an Okinawan weapon consisting of two lengths of wood, or sometimes metal, joined by a chain. The weapon is used by holding onto one of the wooden arms and swinging the other extremely quickly at the victim. The target area would usually be the face or arms, with the aim of breaking bones or causing blunt trauma. Nunchaku come in various flavors, ranging from the basic wooden or metal arms, to arms with attached blades or razors for extra damage. Nunchaku use is considered an art, and a skilled wielder can operate the weapon at such speed, passing from hand to hand, that they could potentially strike a victim a number of times per second. A trained user is also able to “bluff” swings, making it very difficult to defend against, since it is nearly impossible to predict where the blow will come from. Nunchaku can also be used in pairs, with one pair in each hand. 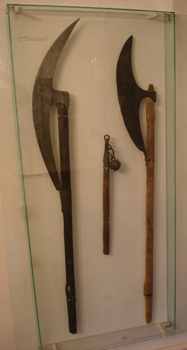 This weapon lies somewhere between a polearm and an axe (a family of weapons known as poleaxes), consisting of a long pole with a wide axe head attached along the side and tip of the shaft. The Bardiche is of Eastern European and Russian origin. Used as a slashing or cleaving weapon, the weapon was wielded in two hands and swung both horizontally and vertically. Bardiches were often wielded alongside a firearm for use in the event of close-quarters encounters, although weapons of this style were in use long before the arrival of firearms. The power of the weapon came from the weight of the blade, which was usually over 2 feet wide. The method of attack would usually consist of cleaving at the limbs or torso of the foe.

Notable appearance: Bardiche variants are often seen in fantasy and manga stories, often in the form of a giant axe with a short handle running behind the blade. 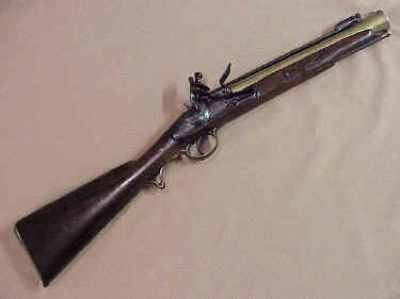 The only firearm to make this list, the Blunderbuss was an early form of shotgun, using powder and shot. The weapon was muzzle loaded and is identified by the distinctive flared muzzle. The nasty part of the Blunderbuss was actually a flaw in the design, the flared muzzle caused the shot to spread quite widely and reduced the muzzle velocity, meaning that shots outside of very close quarters resulted only in shrapnel wounds rather than death. A blunderbuss could, in theory, be loaded with any kind of shrapnel or shot, small stones or scraps of metal were used as ammunition at times. The gun was used by armies of various nationalities, although the weapon originates from Europe. A smaller, one handed version of the Blunderbuss, called a Dragon, was also used. Wounds sustained from a close range hit from a Blunderbuss would be brutal, potentially blowing away whole chunks of the body.

Notable appearance: Jack Sparrow, of the Pirates of the Caribbean movies, wields a handgun similar to a Dragon, while at least one member of the undead pirate crew seen in the first movie uses a Blunderbuss type firearm.