I don’t know what it is about cars in particular, but for some strange reason they are often a very popular canvas for people’s artistic talents – and I don’t just mean painting. This list looks at cars that have been used as the basis for artworks, or just bizarre hobby projects. 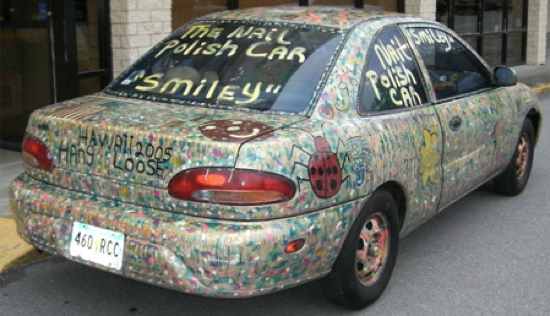 Yvonne Millner of Hopkins, South Carolina, decided to give her 1996 Mitsubishi Mirage a different look, so she decided to paint the car—with nail polish. She started by drawing a smiley face, but today she has designs, patterns and slogans painted all over the vehicle. She would sometimes spend three to four hours a day on designing the car (which she nicknamed Smiley) and has used hundreds of bottles of nail polish in different shades, thus giving the car a unique, colorful appearance. 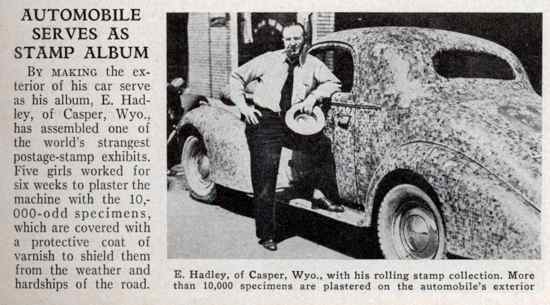 E. Hadley, of Casper, Wyoming, owns an automobile with a difference. Serving as a rolling stamp exhibit, his car is covered with approximately 10,000 postage stamps. To plaster the stamps to the car, five girls worked steadily for six weeks covering the vehicle with the stamps, which came from sixty different countries. The car was later varnished to protect the stamps from the elements. 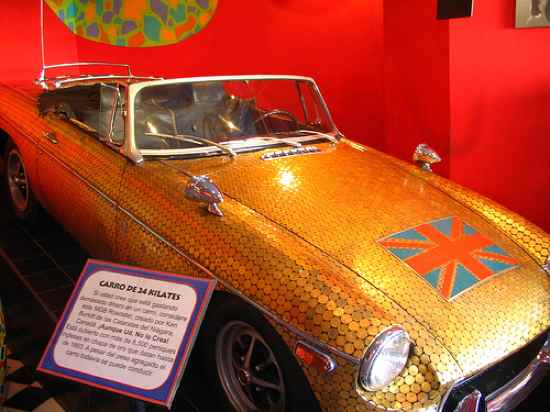 Ken Burkitt of Ontario, Canada, has covered several vehicles, including a 1969 Austin Mini Cooper, with thousands of gold-plated English pennies. The coins used were covered with at least eight coats of polyurethane to prevent discoloration or rusting. To ensure that every inch of the car is covered, Burkitt uses a vice to bend coins in the shape of the surfaces they will cover. 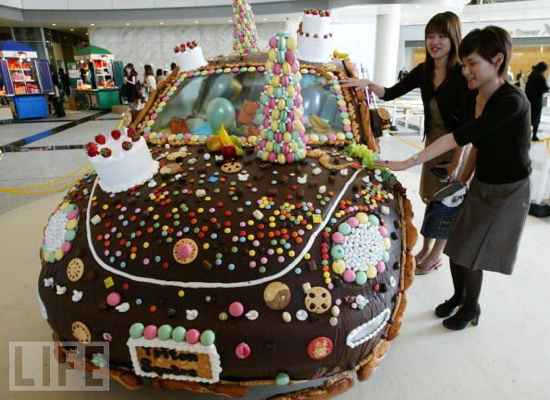 A Chinese car company covered a Volkswagen Beetle with 440 pounds of chocolate for Valentine’s Day, in 2007. Several workers first covered the Beetle with plastic wrap, then the melted chocolate was spread all over the car and candy was used to decorate it. The chocolate Beetle was then displayed outside a grocery store in Shandong province. 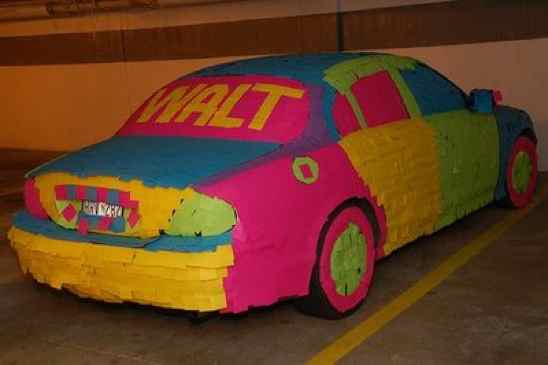 Scott Ableman and a dozen of his colleagues from a company in Washington, D.C., decided to pull a fantastic prank on their coworker, Walt. In less than two hours, the group covered Walt’s Jaguar with 14,000 colorful sticky notes. Every inch of the car was covered except the hood ornament and the license plates. After finding out about his car, Walt went along with the prank and, after removing the notes from the windshield, drove it home to show to his family. 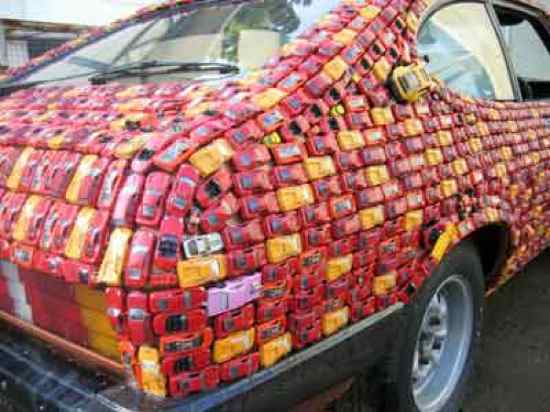 James Ford, a young U.K. artist, after purchasing a 1981 Ford Capri on eBay, decided to turn the car into an art project. The result: General Carbunkle, an homage to the General Lee (the car from The Dukes of Hazzard), which is covered with around 3500 to 4500 toy vehicles. The toy cars mostly came from donations from around the world, although Ford obtained 2000 of the toy cars used by posing as a toy-store owner and buying them at a trade fair. 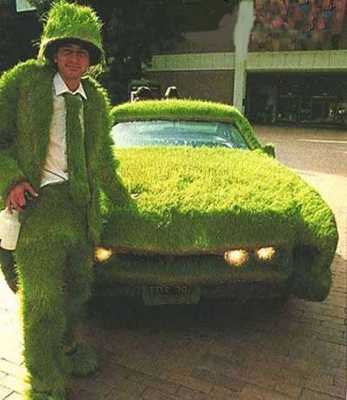 Brooklyn artist Gene Pool’s medium is grass. He first puts adhesive on the surface of his soon-to-be artwork, spreads grass seeds all over it, waters the plants, then waits for the grass to germinate, and voila! Instant art. Pool has used the technique on various items like suits, hats, shoes and briefcases, but his crowning achievements are the two Buick LeSabres that he covered with Manhattan Perennial Rye #2, as well as a grass-covered St. Louis Cardinals bus. 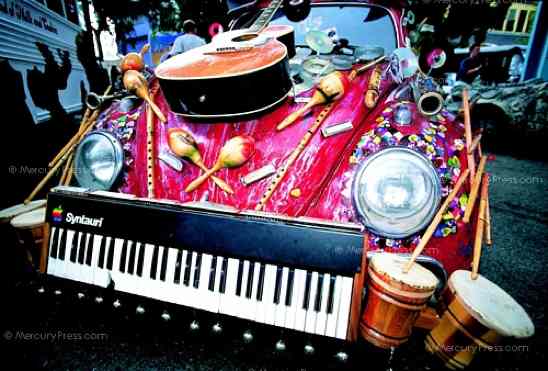 Harrod Blank created “Pico de Gallo” (“spicy salsa” in Spanish), a Volkswagen Beetle covered with working musical instruments. The car also features a stage on the roof and a stereo system. It’s currently displayed at the Art Car World Museum, in Arizona. He has also done the same thing with cameras. 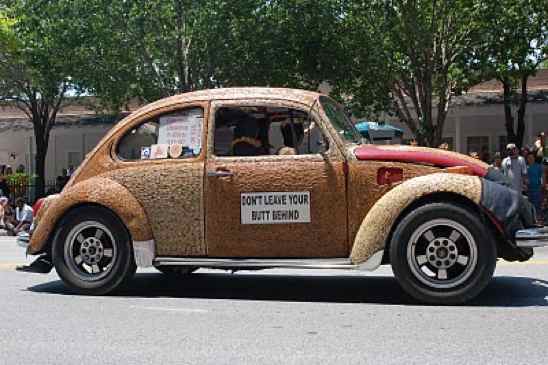 The Stink Bug is a Volkswagen Beetle owned by Carolyn Stapleton of Orlando, Florida. The car serves as a moving antismoking advertisement because it’s covered with thousands of used cigarettes. The words “kick butt” can be seen on the windshield, and a skull-and-crossbones adorns the hood. 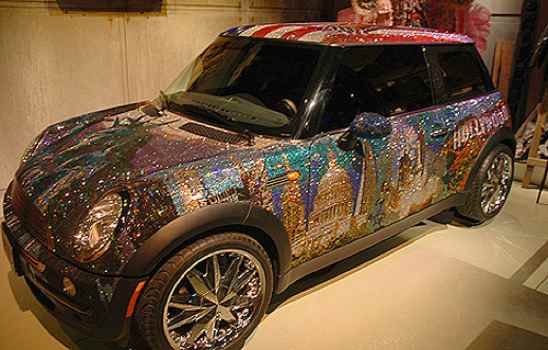 Remember Ken Burkitt from number 8? He and his wife, Annie, get the top spot on this list for their amazing work on a 2004 Mini Cooper, which is covered with more than a million genuine Austrian Swarovski crystals, depicting various U.S. landmarks and symbols, like the Statue of Liberty, the White House, and Mount Rushmore. The masterpiece, entitled “American Icon,” took four artists six months to create, because it was all done by hand. The crystals used were all of the same size and in 50 different colors to represent the 50 states of America. Burkitt said of the work, “We wanted to create something that would pay tribute to America in an eye-catching way. The car takes on a completely different look as the lighting changes throughout the day. The crystal design takes on a life of its own.”