Hayao Miyazaki is a legendary anime film maker. He collaborated with long time film company, Studio Ghibli. He has directed ten fantastic films, as of 2011, having made his first feature length film in 1979. But it wasn’t until 1984, when people really started getting intrigued by his films, as he had marvelous story telling. The visuals and animation kept improving in each film he made. He has a legendary list of films, ones that barely any other animation could compare with. Despite the masterpieces Pixar makes, they cannot top the amazing story and epic visuals of Studio Ghibli, despite being CGI.

10
The Castle of Cagliostro 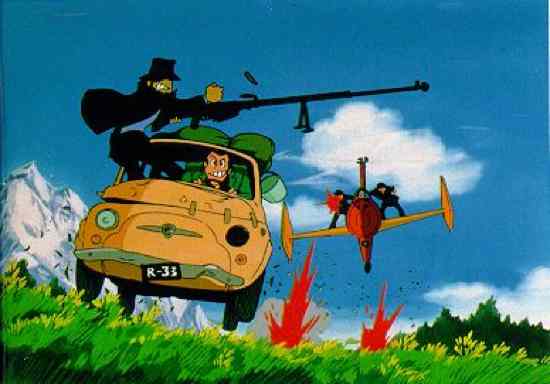 A film about a few bandits who attempt rescuing a princess from an evil Count. Miyazaki’s first film really made an impression among moviegoers. Steven Spielberg called it the greatest adventure film ever made. It’s hard to argue with the man who helped create Raiders of the Lost Ark. This movie’s story was great and the suspense and excitement made the film entertaining. But the problem with the film was the animation, and it’s less compelling characters. This film was not presented by the legendary company, Studio Ghibli, which could have been the reason why the film’s characters were bland. This was Miyazaki’s first feature film, so it’s understandable that the animation wasn’t as beautiful as his newer films, but it left him plenty of time to improve. Miyazaki is also known for making emotionally heart wrenching films with deep messages, but this film was not one of them, disappointingly. Though the action scenes were unrealistic, it’s what made this such a good adventure film. 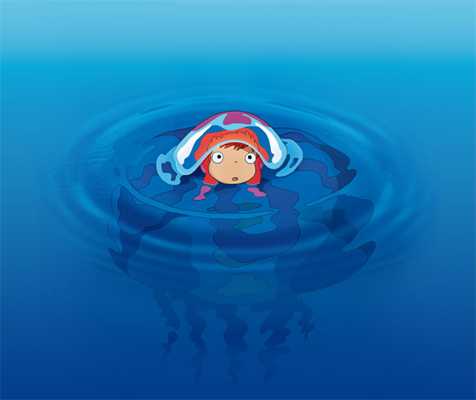 Though Miyazaki’s newest film is not his best, that is, in all honesty, not saying much at all. Ponyo is a beautifully drawn animated film, with amazing visuals that improved over his other films. It’s a story about a young boy who finds a humanoid goldfish, who desperately attempts to be a human girl. The story was great, nothing really too familiar about the plot. But what made it low on the list? Well Ponyo was certainly not bad, it’s plot was more exuberant than compelling. Usually Miyazaki’s films either had a compelling plot, or their characters were very memorable, which this failed at. While Ponyo’s plot was still intriguing, it’s characters were very predictable most of the time. 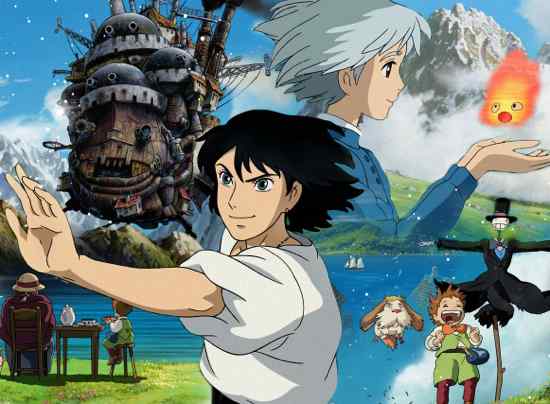 Another one of Miyazaki’s newer films, Howl’s Moving Castle is an epic tale of a young girl cursed by a witch and turned into an old woman. While entering the realm of witches and wizards, she enters Howl’s mysterious moving castle. Inside, she’s taken on all new adventures, and at the same time, she attempts to make herself young once again. The story was great and the characters were memorably interesting. But this wasn’t Miyazaki’s original idea, as it was a adaption from a novel. It may not sound like a big deal as most movies are adaptions from novels. But Miyazaki’s other films were his original ideas, and he got worldwide critical acclaim for them. His ideas were rich and original, much like Howl’s Moving Castle. But it came from a book, which caused a lot of disappointment for the fans. Also, relating to the characters wasn’t so easy as with his other films, and the pace of the plot gets a bit confusing at times. But Howl’s Moving Castle is a beautifully animated film, with epic and magical scenes that are unforgettable. 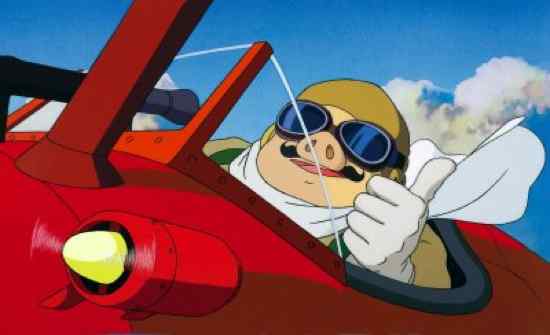 Porco Rosso, a war veteran who happens to be a humanoid pig, lives his life as a pilot who duels with pirates and people jealous of his fame. My first thought was, what an interesting film. When I first heard about it, however, I wasn’t too sure it’d be that great of a Miyazaki film. I thought it would feel a bit different, as it’s story didn’t have the winsomeness that his other films had. But after watching it, I saw that I was wrong about everything. Porco Rosso is a poignant and shocking look at the life of a war veteran, who deals with his life of sinful regret. And the characters are more relatable than one would think. 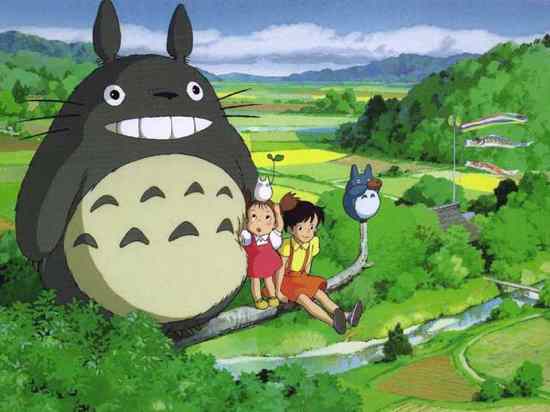 Possibly the most memorable of all Hayao Miyazaki’s films. My Neighbor Totoro is the story of two young girls who move to the country side . The girl’s soon find a giant bunny-like spirit called Totoro. Together, they have amazing adventures as Totoro reveals his magic abilities, most notably growing trees. This film, indeed, had some of the most memorable characters in animation history, even being included in a cameo appearance in Toy Story 3. Throughout the film, the story was surprisingly poignant, but joyful. What it lacked, though, was a compelling plot. It had childlike appeal and joy, but it did not include an interesting story that would keep me hooked like his other films. But this film is still fun for the whole family.

5
Nausicaä of the Valley of the Wind 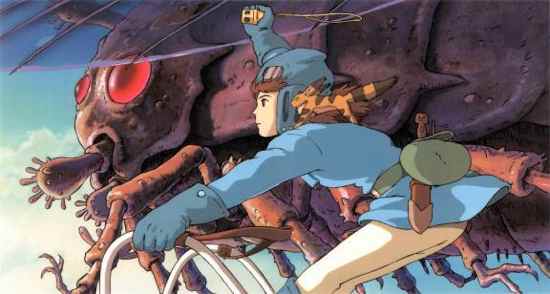 The first ever Studio Ghibli film, and you can see why. This film was Hayao’s second film ever. The epic story revolves around a young woman, Nausicaä, as she desperately tries to protect a race of giant insects from enemy soldiers. The film’s setting takes place 1000 years in the future, in a dying world. Forests are inhabited by deadly insects with poisonous air. After Miyazaki released this, people stopped questioning his ability to make compelling films with great characters. This film basically defined him, as his next films were even more epic and exciting, with better characters. But this film lacked real emotional resonance with most of the supporting characters, which was a bit disappointing to some. But the film’s villains were not traditional villains, they were morally ambiguous. That made for a more interesting film. But this film will always be known for putting Hayao Miyazaki on the map.

4
Castle in the Sky 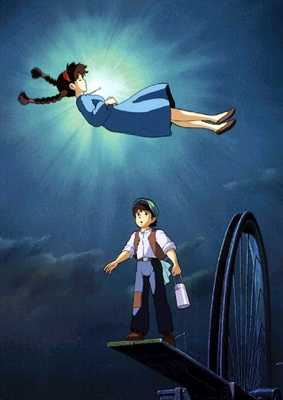 Quite possibly the best storytelling of all, out of any Miyazaki films. Castle in the Sky, considered an epic itself, is the second Studio Ghibli film. It tells the story of a young princess, Laputa, who wears a magical necklace that has the ability to lead people towards the legendary flying castle in the sky. Laputa meets a young boy, Pazu, who joins her as he too searches for the legendary castle, but pirates and agents get in their way. When this film was released, people realized that Miyazaki was a master storyteller. The film’s plot was amazing, it’s English dubbed voice acting had an awesome cast, and the animation was beautiful. The visuals leaves you in awe, all at the same time as it’s amazing script comes into play. Though Miyazaki did not yet reach his full potential, Castle in the Sky is as good as it gets, with an underrated score, I might add. 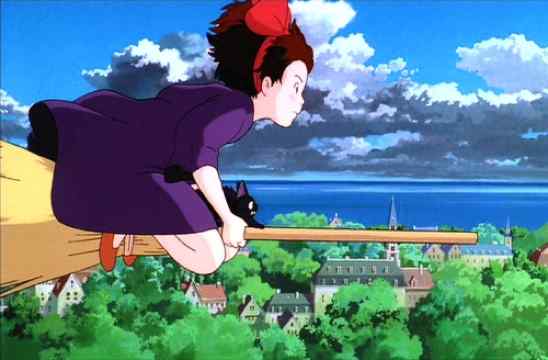 A very, very exuberant story by Hayao Miyazaki. This film is about a young witch who leaves her home and parents to train on her own for a year. All witches are required to have a profession, and she decides to start a delivery service – using her magical flying broomstick, of course. Though the film does not sound compelling, it still delivers enough awesome visuals and storytelling to accomplish greatness. The film had charming characters and a great message. Though the film lacked conflict, which people would have been begging for, it was still entertaining enough to keep anybody hooked from start to finish. Another Miyazaki film for the whole family to enjoy. 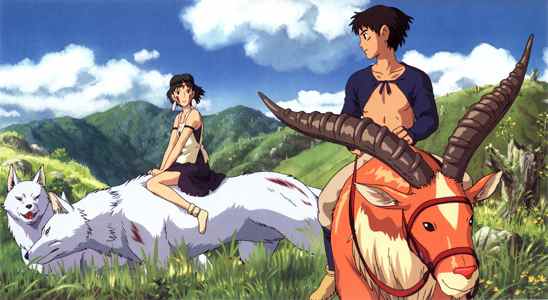 An epic that would make David Lean proud. The story involves a young man, cursed with a an animal demon’s scar that will kill him. He leaves his village, hoping to find a cure as he gets caught in a war between animal and man. He meets a girl, San, who happens to believe she is a wolf and despises humans. This film has almost everything, great visuals that inspired James Cameron’s Avatar (Believe it or not), great storytelling and great animation as it was Miyazaki’s first use of CGI in a film. There were a ton of characters, and most of them had importance. The villain was not one sided like most villains in his other films. But the problem with this film was how violent it was. Like I said, it’s a David Lean style film, of course it’s violent. But, then again, it’s animation. Kids love Miyazaki’s previous less violent films, but his brutal and frightening scenes might take them by surprise. Either way, Princess Mononoke was the next step in the evolution of animation, being one of the first to include CGI in it’s film. Toy Story, also. 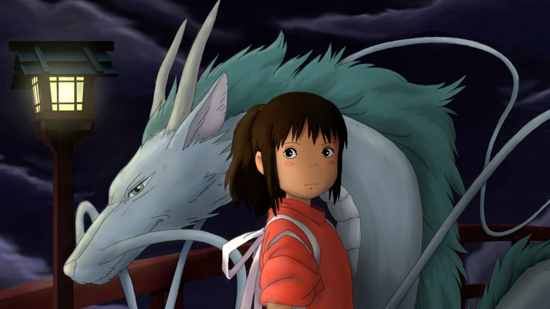 A magical, fun, haunting, poignant, amazing, compelling tale of a young girl who gets trapped in a world of spirits after her parents get caught eating food presented to the spirits. I don’t want to say too much as this film was great enough for me not to even mention anything. Spirited Away captures the essence of fantasy. The characters in the film are memorably amazing, the animation was awesome, and the story was unbelievably astonishing. The film’s elements are interesting, and the world is full of unpredictability and shockers. Some of the characters are frighteningly intriguing, and the villain seems pretty menacing. There seemed to be no flaws in this film, which is a main reason why I put this film at the top of the list. Just when you thought Miyazaki had made his best films, Spirited Away came out.