Trees are boring. All they do is stand there, occasionally looking pretty in the winter or dropping fruit in the autumn. Except trees are fascinating organisms. They live on a timescale that is hard to relate to human life, and because they act so slowly we often do not notice what they are doing. Here are ten particularly unusual trees; unusual either because of their biology or because humans have changed them in some way. 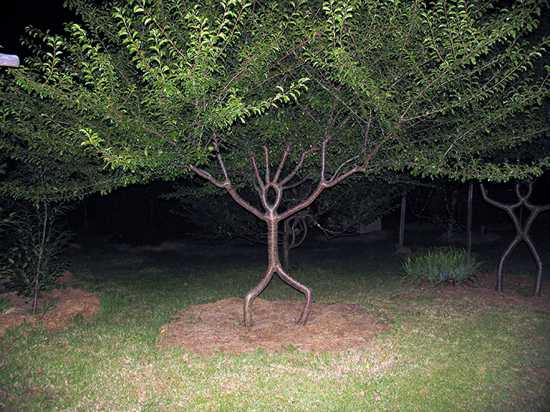 Arborsculpture is the use of living trees to create a desired shape or structure, something like bonsai on a grand scale. Axel Erlandson is considered the greatest of all arborsculptors and his ‘Circus trees’ are still popular attractions. Through directing the growth of the tree while alive, it is also possible to create unique pieces of furniture by harvesting the wood once it takes on the desired form. While Erlandson’s work, seen here (http://www.arborsmith.com/treecircus.html), is the most commonly cited when arbor sculpture is discussed, there are many living practitioners. 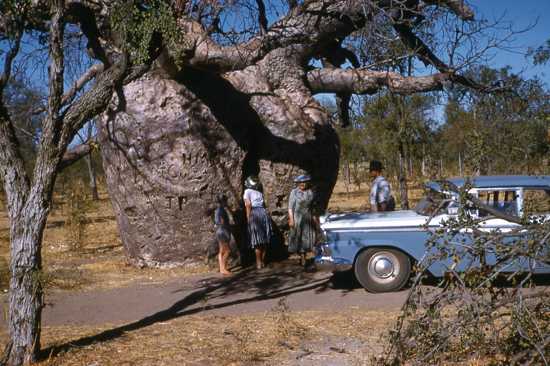 Outside the town of Derby, in Western Australia, is another tree that has been put to use by mankind. The Boab Prison Tree is so named because its stout trunk, 14m in circumference, has been cut into to form a small cell used as a prison. Police who were walking their prisoners into town would use the tree as a temporary holding cell overnight before carrying on to their final destination. The Boab is approximately 1500 years old, and visitors are asked to view it from behind a fence to stop it being damaged, however few resist the temptation to go inside. The Boab of Derby is not the only Boab tree turned into a prison, there is another of comparable size outside the town of Wyndham, which is less often visited due to its isolation. 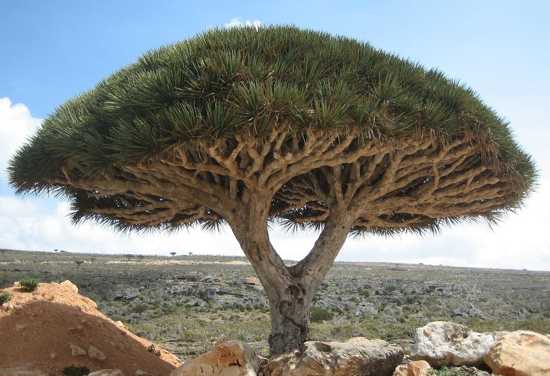 The Socotra Archipelago in the Indian Ocean, off the coast of Somalia, is home to the Dragon Blood tree. The Dragon Blood tree is unusual for a number of reasons. Its trunk is bare and branches only at the top, ending in sharp spiky leaves. This unusual appearance is due to the Dragon Blood tree belonging to the monocotyledons, the same group of plants as grasses, rather than dicotyledons, which are more common amongst trees. As well as an unusual exterior, the trees also reveal an unusual interior; once pierced bright red sap oozes out. The crimson sap, called Dragon Blood, is dried and then used as a medicine or a dye. While the inhabitants of Socotra still use it as a panacea, the sap is mostly used in the West as a red varnish for violins. 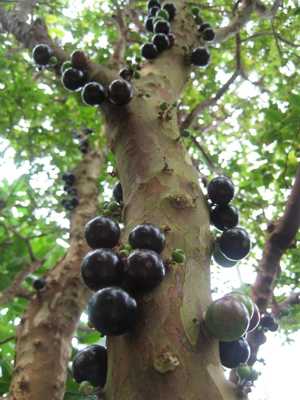 Jabuticaba, Myrciaria cauliflora, is an unusual fruit tree native to Brazil. The fruit of the tree grow all over the trunk, and not just in the branches, making it look like the tree is extruding oily tears. The small black fruit are almost universally compared to grapes and are either eaten whole or crushed to make juice or wine. Almost as strange as the appearance of the black fruits are the hairy white blossoms from which the fruit grow. The tree will bloom, and fruit, several times a year if the conditions are good. 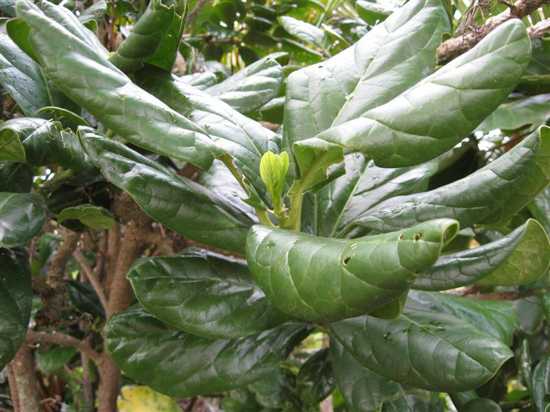 What is special about this tree? It looks just like many other trees and does not do anything particularly exciting. This tree is unusual in the literal sense of uncommon as it is, in fact, the rarest tree we know of in the wild. There is a single example of this tree in the Three Kings Islands off the north coast of New Zealand. Since the lone example of the tree is female there is no hope of breeding more. In cases of self-pollination the fruit are almost always sterile. Luckily, however, it is possible to detach shoots and culture them so the species can now be found in several places, but for true survival of the species it would be advantageous to locate a male Pennantia baylisiana.

Everyone knows about the giant redwoods, famous for their size, but the kauri tree of northern New Zealand is one of the largest trees, by volume of wood, in the world. The trees can be up to 50m tall and 15m in circumference. This is less tall than a sequoia but the kauri does not narrow as the redwood does towards its top. Because of the strength of the wood and the amount a single tree could yield, the Kauri was heavily logged in the 19th century. Kauri Gum – semi-fossilized resin – was once a major commodity used to make varnish. People who extracted the gum from buried deposits were known as Gum-diggers. The density of the wood allows it to survive well once buried, and workable wood is dug up after being buried in bogs for over 50,000 years. 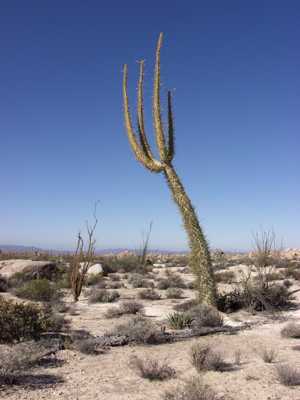 The Boojum tree of Baha California resembles a cactus more than a tree at first sight. The thin trunks of the tree can grow in sinuous shapes because the inner wood is remarkably soft and they grow up to 20m high. As a native of the desert, the leaves of the plant are small and cover the trunk to reduce water loss. When the trees flower they produce a cloud of cream blooms at the very top of the trunks. The Boojum tree derives its name from the absurd poem ‘The Hunting of the Snark’ by Lewis Carroll, which is appropriate for the unusual looking tree.

“But if ever I meet with a Boojum, that day,
In a moment (of this I am sure),
I shall softly and suddenly vanish away —
And the notion I cannot endure!” 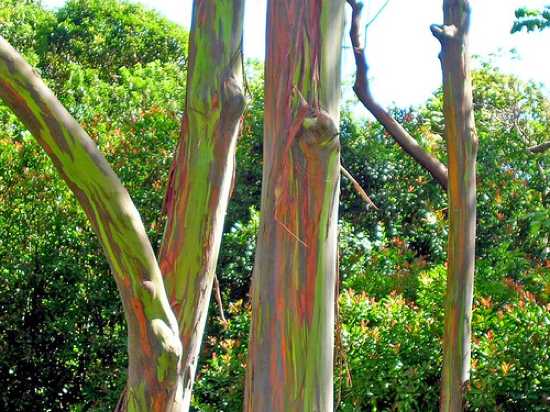 The Rainbow Eucalyptus is a tree with bark so brightly colored that it is almost hard to believe that it is not an elaborate practical joke. This tree, native to the Philippines, sheds the outer layer of its bark often to expose new, green bark underneath. As the bark ages it goes through several color changes from green, to blue, to purple, to orange, and finally to brown before being shed. Because the bark is shed in irregular patches the tree displays a collection of all these colors at once giving a kaleidoscopic effect. They can be grown in many places which will not experience frosts but in the Philippines they are mostly cultivated for use in paper manufacture and not as decorative trees. 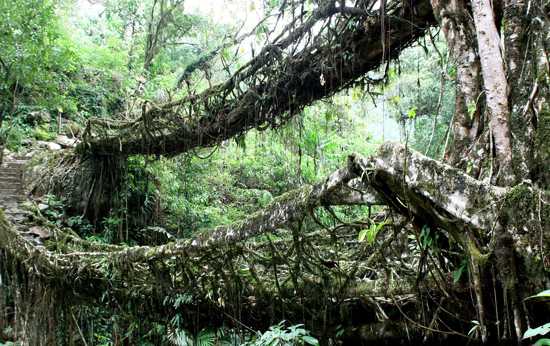 Root bridges are a specialized form of arboriculture practiced in the forests of northern India. The rubber trees of the Cherrapunji have been exploited for centuries by the Khasis people to grow their own bridges over streams and rivers. To grow your own bridge you need to hollow out a log, lay the log over the gap you wish to cross, and direct the roots of the tree to grow into the log. The roots will grow until they find solid earth to attach to, anchoring the bridge. Once the roots have formed a bridge, soil and stones, or other wood, are laid over them to protect them from damage as people cross. 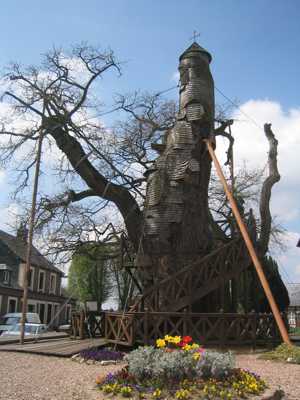 Le Chêne Chapelle (The Oak Chapel) in Allouville-Bellefosse is an oak which has been carved out to house two chapels within its enormous trunk. The oak itself is approximately 800 years old, and the chapels were added in the 1600s. A lightning strike burned the core of the tree but the tree survived and remained standing, allowing the local priests to build their chapel within it. Today the tree is beginning to show signs of its age and the pressures of housing a religious site, and so requires supporting struts. Despite this, the chapel remains in use and a mass is celebrated twice a year at the site. To reach the upper of the two chapels there is a staircase which winds around the trunk.