Scientists craft their understanding of the universe through studies and tests. Most of the time, the outcome is pretty straightforward. However, some tests and surveys start out normal and then take unexpected turns.

They may reveal mysteries or accidental new states of nature. Or they may prove old suspicions. Others deliberately push to break the barriers, to learn about long-gone cultures from one body, or even to create what does not exist in nature. 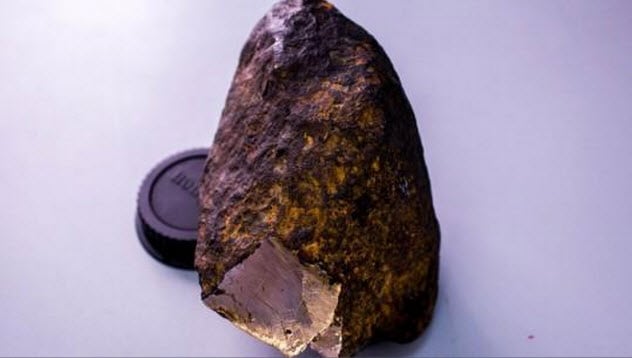 When a meteorite smacked into southern Russia in 2018, gold hunters mistook it for a precious nugget. The chunk was a disappointment when it landed on the laboratory table and tested negative for gold.

However, scientists had a field day—they got to pick the name of a new mineral. The meteorite was 98 percent kamacite, an iron-nickle alloy that only bonds in space. The newcomer, called uakitite, made up the rest along with other known minerals.

Under the microscope, uakitite was measured as 25 times smaller than a grain of sand—so tiny that most of its properties cannot yet be identified. The mystery mineral did resemble space compounds called carlsbergite and osbornite.

It may be the first time that uakitite has been found on Earth, and it’s a scientific puzzle as far as its composition is concerned. Despite that, uakitite was not the only unusual thing that arrived that day. Scientists discovered that the meteorite itself had a scorching birth, forged in more than 1,000 degrees Celsius (1,800 °F).[1] 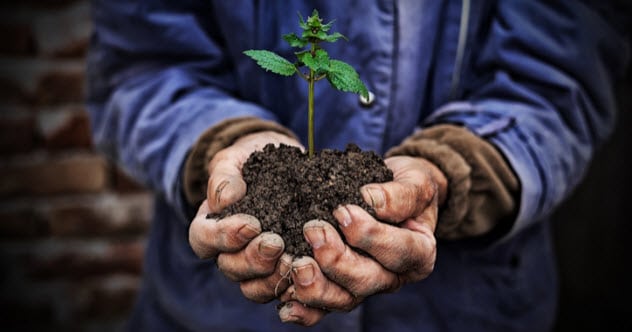 A 2018 study revealed that Earth’s soil is packed with double the amount of carbon dioxide (CO2) that is in the atmosphere. The greenhouse gas is the by-product of soil organisms munching on the carbon of natural debris like leaves. This cycle releases stored CO2 in plant matter and is called “soil respiration.”

Trees would consume this CO2 again. However, climate change is now causing the gas to leak from the ground at an increasing rate—and plants cannot keep up.

Scientists collected data from over 2,000 sources focusing on ecosystems’ rainfall, temperature, and soil. It confirmed that microbes were getting busier belowground, pushing up the Earth’s soil respiration 1.2 percent in 25 years.

What sounds like a small increase is an alarming shift for such a small period of time. Researchers are not certain of the long-term effects if this hyperventilation continues. It is likely to turn into a vicious cycle—more CO2 heats up the soil, and warmth makes the microbes churn out more of the greenhouse gas.[2] 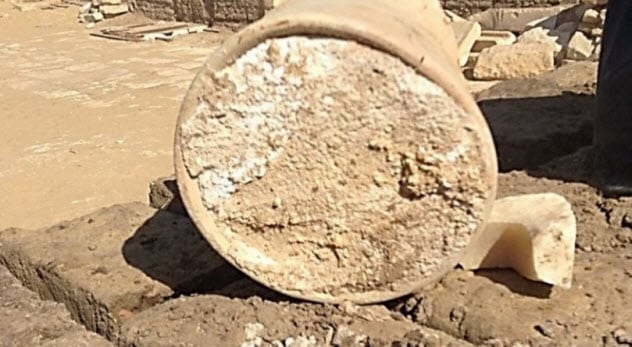 When archaeologists opened an Egyptian tomb in 2018, they were in for a treat—a substance that could be the world’s oldest cheese. The burial chamber belonged to Ptahmes, the mayor of Memphis during the 13th century BC.

Around 3,200 years old, the cheese was found wrapped in cloth and stored in a jar. Tests showed that it was made from sheep’s and goat’s milk, but nobody would be smearing some on a cracker anytime soon. The cheese was contaminated by deadly ancient bacteria.

Whoever made the dairy product did so without pasteurizing the milk. If any Egyptians had sampled the cheese, they could have contracted brucellosis. This lethal disease spreads from animals to people if dairy is unpasteurized.

A study of the tomb’s murals provided the first evidence of an old suspicion. Until now, there was no proof that Egyptian citizens used cheese in their daily lives. However, several of the tomb’s paintings showed people bartering with cheese.[3] 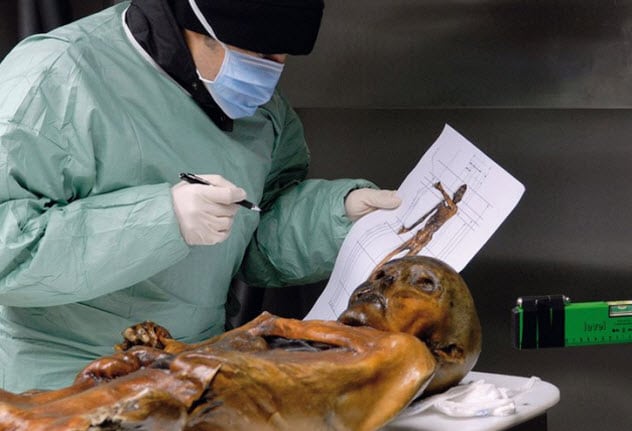 Otzi rose to stardom when his body was discovered in the Alps in 1991. He is perhaps the most studied ancient person on the planet. The 5,300-year-old has already yielded plenty of amazing information. But in 2018, researchers turned to his 61 tattoos and a “first aid” kit found among his belongings. The idea was to see if they could tell scientists more about his society.

The tattoos were created by small cuts that were rubbed with charcoal and positioned at known acupuncture points. Past studies suggested that the Copper Age society discovered acupuncture 2,000 years before Asia.

The 2018 investigation dug deeper and convinced researchers that Otzi’s people had a health care system that was remarkably advanced. The tattoos were made with considerable effort. This implied that Otzi was in a place where trained individuals provided care for his complaints (whether the treatment worked or not).

If the Copper Age group’s acupuncture was the real deal, this meant that they refined their craft through study, trial and error, and the passion for advancing medicine. Herbs found with Otzi also had properties that served as makeshift bandages, a disinfectant, an antibiotic, and a dewormer.[4] 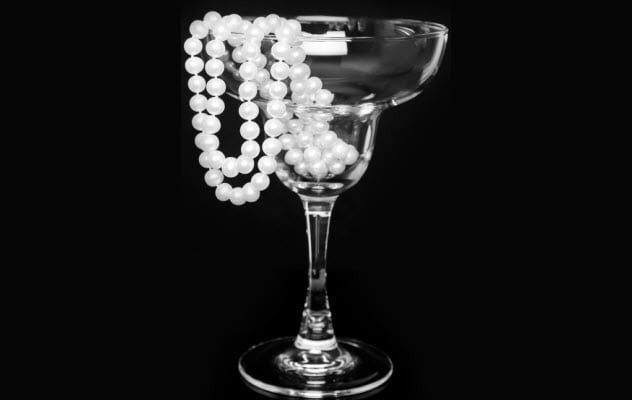 Cleopatra, the last queen of Egypt, bet her Roman lover Marc Antony that she could blow a fortune on a single meal. The amount was 10 million sesterces—a king’s ransom.

According to the legend, she drank a cocktail with a pearl in it when the second course was served. Cleopatra, who lived from 69 BC to 30 BC, took off one earring—a pearl worth the said amount—and dropped it into a bowl of vinegar. Once dissolved, the queen consumed it and won the bet.

The story was recorded by the respected Roman writer and philosopher Pliny the Elder (AD 23–79), but scholars swept it under the myth carpet. In 2012, scientific tests showed that the pearl cocktail was possible.

Researchers took white vinegar from the local supermarket shelf because it came closest to the wine vinegar that Cleopatra likely used. It took 24–36 hours for a big pearl to dissolve.[5]

However, if the vinegar was boiled and the pearl added as crushed pieces, the process was completed in less than 10 minutes. Cleopatra’s hobby of toxicological experiments makes it plausible that she hastened the process for show by softening the pearl beforehand. 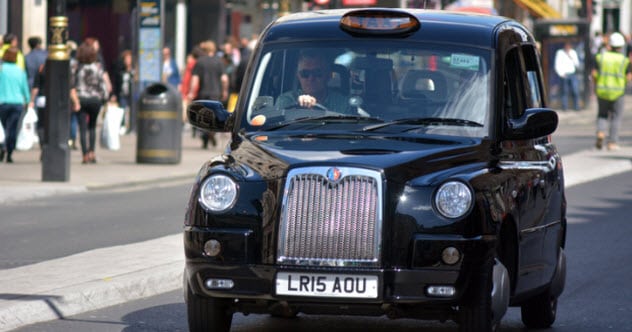 In 2000, researchers shepherded 16 London cabdrivers into a scientific facility and scanned their brains. The study showed something amazing—the brain of a taxi driver grows on the job.

Compared to other people, cabbies had a bigger hippocampus. In birds and other animals, this brain region is linked to navigation. This makes sense because cabdrivers navigate and memorize routes all day long. Sometimes, they do it for decades.

In the same vein, the scans also revealed that the hippocampus kept adapting and growing for as long as somebody stayed in the profession. Drivers with the longest experience had the largest brains. When questioned, the cabbies said that they noticed no difference in themselves but admitted that navigating London was a feat that required immense memory.

This seemingly quaint study provides far-reaching hope for people with brain damage and conditions like Parkinson’s. It dispelled the belief that an adult’s brain cannot change to circumnavigate damage or disease. The cabbies’ brains physically changed. This opens the door to future therapies using environmental stimulation, like navigation, to rehabilitate the brain.[6] 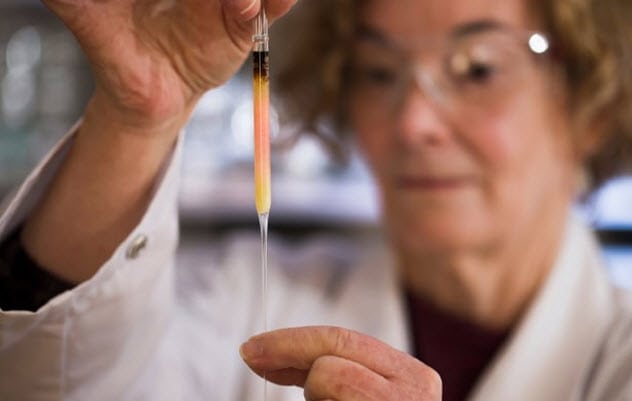 When asked to guess the oldest biological color, many people can be forgiven for suggesting brown or black. After all, they do tint the most ancient fossils and plants. However, in 2018, scientists discovered that the planet’s earliest biological color is bright pink.

Rocks harvested underneath the Sahara desert came from a layer of shale that was 1.1 billion years old. During tests, the rocks were powdered for the extraction of organisms. All that was left of these organisms was a bright pink pigment. The pigments were microscopic chlorophyll fossils, a by-product of the long-gone photosynthetic organisms.

When the discovery was made, disbelief gave way to excitement when scientists realized that the pink powder solved a vexing riddle. Nobody could understand why complex animals had evolved so late—only about 600 million years ago. And now they had the answer.

The organisms that caused the pink molecules were cyanobacteria. They were the main marine food source at the time. But they were too microscopic for larger life-forms to feed on, let alone support their evolution.[7] 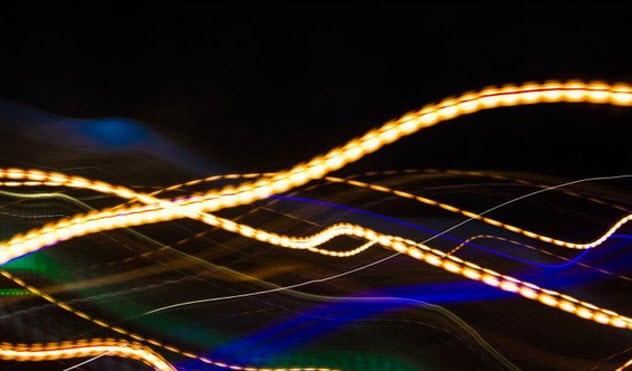 Scientifically speaking, light is not as simple as daytime sunshine or flicking on a bedroom bulb. Light has different colors and is a beam that rotates on its own axis. The latter is called angular momentum and always measures as a whole number multiple of Planck’s constant.

Then scientists found light that broke the rules of the swirling phenomenon. The discovery was accidental.

In 2016, light was tested by shooting beams through crystals. The intention was to create light with a corkscrew structure and find a new behavior that might one day secure better optical communication.[8]

After analyzing one particular beam, scientists were stunned to measure its angular momentum as a half-number. This new form of light shattered physicists’ prior beliefs.

Hailed as a breakthrough in the fields of science and physics, the discovery proves that light can still turn up in strange ways. On the more practical side, the unusual light is earmarked to help develop faster-paced and safer fiber-optic cables and Internet connections. 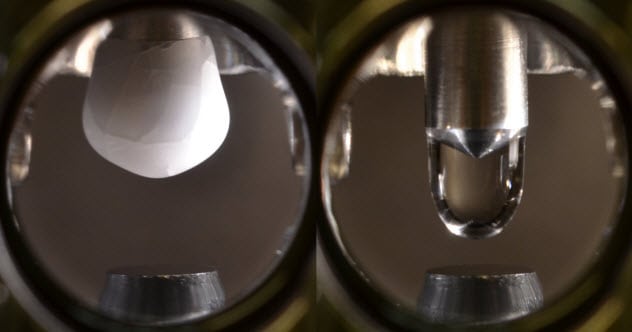 In 2018, researchers wondered why molecular grime forms on self-cleaning surfaces. In particular, those coated with titanium dioxide (TiO2). The only clue was that air and water were somehow responsible.

To eliminate water as a suspect was hard. The life-giving liquid does not exist in pure form anywhere. It was critical to use uncontaminated water because impurities could throw off the test results. As pure water does not exist, scientists created a single drop of the cleanest water in history.

A device was invented to filter the fluid under extreme conditions. Inside was a vacuum with a ceiling rod pointing down. The room was chilled to -140 degrees Celsius (-220 °F) before purified water vapor was released into the chamber.

An icicle formed at the rod’s tip. Allowed to melt, the pristine drop fell on TiO2 below, which afterward showed no molecular film. Air turned out to be the guilty factor.

Additional tests found no water-related compounds in TiO2 dirt. Instead, there were acids produced by plant growth. Apparently, they float in the air and are very capable of tarnishing a self-cleaning surface.[9] 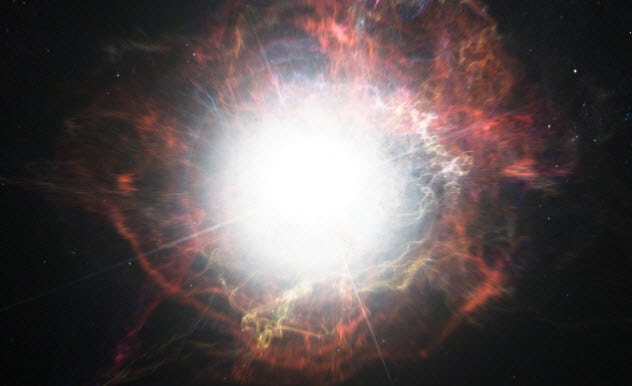 When supernova iPTF14hls was detected in 2014, astronomers had no idea that they were looking at an unprecedented event. Like any other, iPTF14hls was expected fade away after 100 days. Five months later, in 2015, the blast was burning brighter. The supernova seemed to die in slow motion. After two more years, it appeared to be only 60 days old. The explosion might even be older.

Strangely, iPTF14hls is located at the same place where a supernova was recorded in 1954. If they are the same, the phenomenon has been active for at least 60 years. This study challenges everything scientists know about the life cycle of stars. Frankly, certain aspects floored the experts.

There is no clear explanation why iPTF14hls dramatically dims and brightens, why it releases such immense energy, or why no star as big as the one that caused it (between 80 and 140 solar masses) has ever been seen. In particular, the energy release was frightening. It equaled the energy that holds together its home galaxy. Theoretically, several such supernovas in one star cluster could shred any galaxy.[10]