Marcus Tullius Cicero was a Roman politician, lawyer, and orator who lived from 106 BC to 43 BC. He was one of the very few “new men” in Rome, meaning the first man in his family to become a senator, and gain the highest office of consul. He’s best know for stopping the Catiline Conspiracy, his philosophical works, and his devotion to the Republic. Cicero was invited to join the powerful political union formed by Caesar, Crassus, and Pompey, but Cicero refused, and became an opponent of Caesar. The following quotes come from his various writings, speeches, and letters. 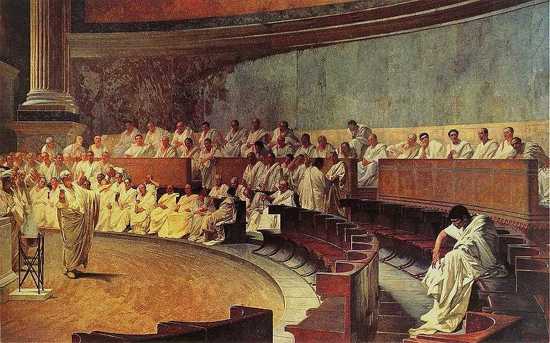 2) “Times are bad. Children no longer obey their parents, and everyone is writing a book.”

3) “My refutation would be framed in considerably more forcible terms if I did not feel inhibited by the fact that the woman’s husband- sorry, I mean brother, I always make that slip- is my personal enemy.”

Note: This quote is from Cicero’s defense of Marcus Caelius Rufus, who was charged by his former lover Clodia of trying to poison her, and murdering an Egyptian envoy. Cicero here references the rumor that Clodia and her brother, Publius Clodius, were also lovers. Clodius and Cicero were enemies mainly as a result of the Bona Dea scandal- Clodius was discovered disguised as a woman at a ceremony held at Caesar’s house, and when he went to court for sacrilege, Cicero disproved his alibi. The matter was made more complicated when Cicero’s wife accused him of carrying on an affair with Clodia. Cicero uses his defense of Rufus to completely tear Clodia apart, calling her “a lewd and depraved prostitute” among other things. Rufus was declared innocent.

4) “If you have a garden and a library, you have everything you need.”

5) ) “Six mistakes mankind keeps making century after century:
Believing that personal gain is made by crushing others;
Worrying about things that cannot be changed or corrected;
Insisting that a thing is impossible because we cannot accomplish it;
Refusing to set aside trivial preferences;
Neglecting development and refinement of the mind;
Attempting to compel others to believe and live as we do.” 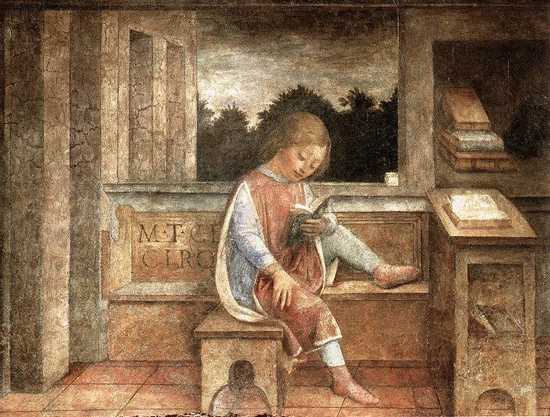 6) “The life given us, by nature is short; but the memory of a well-spent life is eternal.”

7) “Though I miss the convenience of your help at every point, it is not for my sake but for yours that I am sorry you are unwell… Be sure at this time not to attend in your kindness to anything other than what is most appropriate to regain your health.”

Note: This comes from a letter Cicero wrote to Tiro. Tiro was a family slave, who continued to work for Cicero after he freed him. He was very important in Cicero’s life and career, since he took dictation for him, organized his finances, and helped him with his writings. He published some of his own work, including a biography of Cicero, but these have been lost. Tiro was also the creator of Tironian shorthand, which was used into the 17th century for note taking.

8) “To study philosophy is nothing but to prepare one’s self to die.”

9) “What is morally wrong can never be advantageous, even when it enables you to make some gain that you believe to be to your advantage. The mere act of believing that some wrongful course of action constitutes an advantage is pernicious.”

10) “Friendship makes prosperity more shining and lessens adversity by dividing and sharing it.” 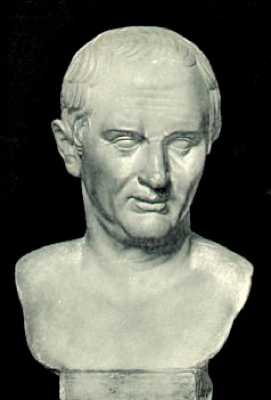 11) “It is foolish to tear one’s hair in grief, as though sorrow would be made less by baldness.”

12) “You assumed a man’s toga and at once turned it into a prostitute’s frock. At first you were a common rent boy; you charged a fix fee, and a steep one at that. Curio soon turned of, though, and took you off your game. You were as firmly wedded to Curio as if he had given you a married woman’s dress. No boy bought for lust was ever as much in his master’s power as you were in Curio’s. How many times did his father throw you out of his house? How many times did he set the watchmen to make sure you did not cross his front door? And yet under cover of night, driven by lust and money, you were let in through the roof tiles.”

Note: The “you” being addressed here is Mark Antony. This quote comes from one of Cicero’s many Philippic speeches against Antony. As you’ll see by the last quote, Antony didn’t exactly laugh these speeches off.

13) “Not to know what happened before you were born is to be a child forever. For what is the time of a man, except it be interwoven with that memory of ancient things of a superior age?”

15) “Let the welfare of the people be the ultimate law.” 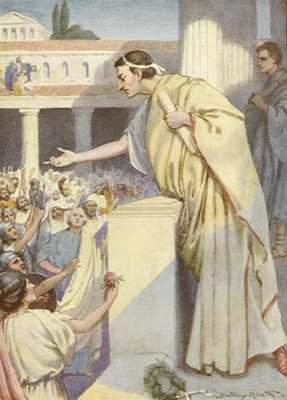 16) “The young man should be praised, honored, and exalted.”

Note: Cicero said this about Octavian (Augustus). The last part in Latin is tollendum, the joke being that this word has another meaning besides to exalt: to be destroyed, or gotten rid of.

17) “What I most badly need at the moment is a confidant… And you whose talk and advice has so often lightened my worry and vexation of spirit, the partner of my public life and intimate of all my private concerns, the sharer of all my talks and plans, where are you? I am so utterly forsaken that my only moments of relaxation are those I spend with my wife, my little daughter, and my darling Marcus. My brilliant, worldly friendships may make a fine show in public, but in the home they are barren things. My house is crammed of a mourning, I go down to the Forum surrounded by droves of friends, but in all the crowds I cannot find one person with whom I can exchange an unguarded joke or let out a private sigh.”

Note: This is from a letter Cicero wrote to his friend Atticus.

18) “When I notice how carefully arranged his hair is and when I watch him adjusting the parting with one finger, I cannot imagine that this man could conceive of such a wicked thing as to destroy the Roman constitution.”

Note: This is in reference to Caesar, who had a reputation for being a bit vain.

19) “The name of peace is sweet, and the thing itself is beneficial, but there is a great difference between peace and servitude. Peace is freedom in tranquillity, servitude is the worst of all evils, to be resisted not only by war, but even by death.”

20) “Come here soldier. There is nothing proper about what you’re doing, but at least make sure you cut off my head properly.”

Note: Cicero said this to Herennius, who was ordered to kill Cicero by Mark Antony during the proscriptions of the seconded triumvirate.