Skulls are an interesting part of the skeleton, because they give us an idea of what the face of its owner was like. To those who study them, skulls can also give a wealth of information about diet, lifestyle, health, age, and even brain size. Throughout history, many strange skulls have been discovered which seem to go against all previous knowledge. Sometimes such skulls lead to better understanding in various fields, but unfortunately there have always been those who enjoy fabricating unusual skulls for attention and profit. These skulls fall down in the face of proper testing, yet they persist until the fraud is discovered and can be of great interest. This is a list of hoax skulls, mistaken skulls, and unusual or misleading practices pertaining to skulls. 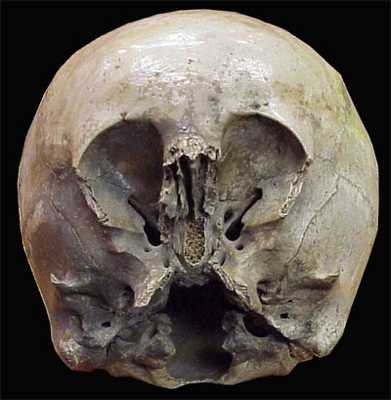 This skull was apparently found in Mexico around 1930 but only showed to the public by Lord Pye in 1999. It was claimed to either be the skull of an alien infant or an alien-human hybrid. Although the damaged lower skull was child-like, the upper cranium was huge, being 1600mL, over 400mL larger than would be expected based on the lower skull. Pye claimed that radiocarbon dating had proved it was 900 years old and that anonymous scientists had confirmed it to be the skull of an alien. However, independent DNA testing revealed the skull to be Native American, belonging to a child who probably had hydrocephalus, or ‘water-in-the-brain’, a congenital disorder where there is too much fluid in the skull. Sufferers of this condition can develop abnormally large craniums, although modern medicine can now relieve the fluid pressure with cerebral shunts to drain the excess liquid. 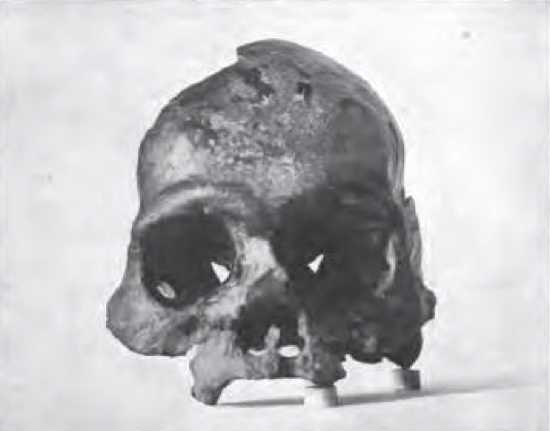 This skull was found by miners in Calaveras, USA, in 1866. It was used by Josiah Whitney as proof that humans had lived in the Americas as long ago as the Pliocene age, over two million years ago. It looked quite modern, and was referenced by many creationists as proof that humans had not changed or evolved through time. Chemical tests showed that it was much more recent, and the story of its discovery did not match with the condition of the skull itself, yet Whitney remained adamant that it was genuine. It was so widely believed to be a hoax that many people came forward and claimed that they themselves had planted it as a practical joke. In 1992, radiocarbon dating conclusively showed it to be only about 1000 years old. 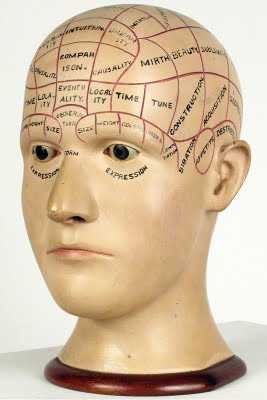 Phrenology was a European pseudoscience that was in vogue during the nineteenth century. Doctors had observed that people whose brains were slightly more developed, and therefore bulged, in certain regions had corresponding mental faculties. For example, people with lesions (gaps) in the speech area of their brains are often unable to speak. This lead to the idea that by measuring the slight bumps and bulges of the skull they could determine the shape of the brain and infer data about someone’s mental abilities. Many people used it to show that they were intrinsically superior to others. It was even used as fortune-telling for children to see how they would fare as adults. Unfortunately, the shape of the brain does not even closely correspond to the shape of the skull, and moreover, the areas of the brain said to carry traits such as ‘conscientiousness’ and ‘suavity’ have since been shown to be incorrect. However, phrenology did increase interest in neuroscience and indirectly led to much more scientifically sound knowledge. 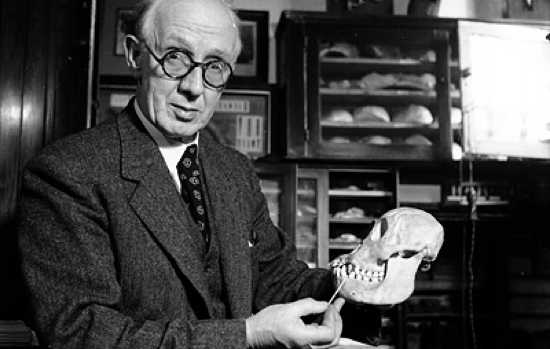 In 1912 in Piltdown, England, Charles Dawson discovered a strange skull that had a curious mixture of human and ape features. He claimed it was the ‘missing link’ between humans and apes. This skull had the upper face and tall cranium of a human, but the long, sloping jaw of an ape. The skull was in fact a human cranium coupled with an orangutan mandible and filed-down chimpanzee teeth, all stained to appear more ancient. As more and more human ancestor skeletons were found, Piltdown man began to look more and more out of place. In 1953, scientists conclusively showed it to be a farce. Piltdown man inspired huge paleontological debates about how humans evolved and it remains one of the most famous hoax skulls. 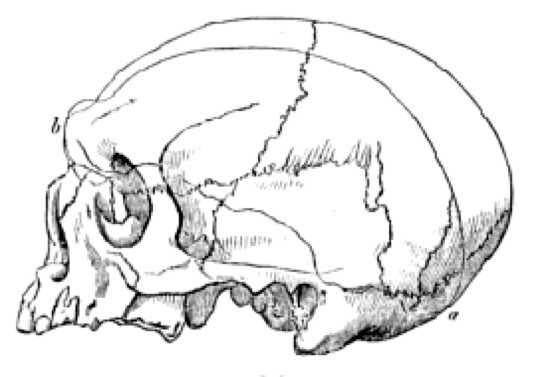 In 1828, a strange skull from the island of Marken in the Netherlands was found. Although it was dated as modern, it differed from other human skulls with its sloped forehead. Hypotheses to explain this abounded, most prominently that the islanders were in fact not homo sapiens but a more ancient hominid which had evolved in isolation, dubbed ‘batavus genuinus.’ Anthropologists noted that the islanders did indeed have sloped foreheads, and some claimed that they were the modern descendants of Neanderthals. In 1912, a Dutch physician finally showed that the traditional tight headwear worn by Marken children was what caused the foreheads to develop with a slope. Marken children brought up off the island do not have sloped foreheads, and the Marken people are quite able to have healthy children with other humans, showing that they are indeed homo sapiens. 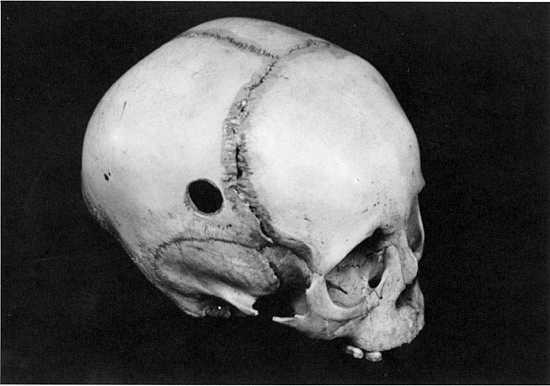 Trepanning was a practice done since at least eight thousand years ago. It involved drilling a hole in the skull as a treatment for many head-related disorders, such as headaches, seizures, and mental disabilities. Many skulls with trepanned holes have been found. Trepanning did not always result in death, as many of these skulls show some degree of healing which would have occurred over several weeks or months after the procedure. Even so, there would have been many deaths due to infection. Today trepanning is still used as pseudoscience by various people purporting that it releases evil spirits or energy, that it improves health, cures depression, and various other unsubstantiated claims. 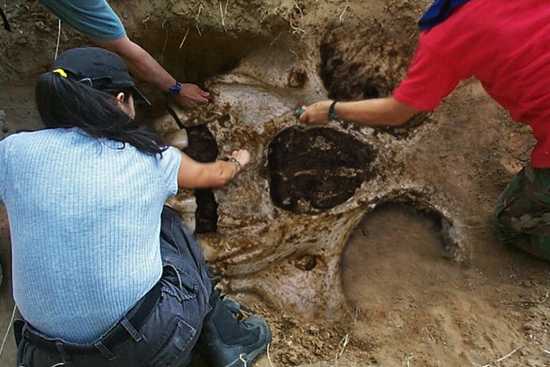 The military is said to have secured a large area and forbidden anyone entry except government personnel. The site was kept in complete secrecy until a helicopter secured photographs as it flew overhead. The photos show workers uncovering a skull of phenomenal size, and gradually revealing the rest of the giant skeleton. The skeleton became famous in email forwards that gave some variation of the above story, but in fact, the photographs were created through manipulation by combining various real but unrelated pictures. Other giant skulls have been put forward, but all have been either falsified, mysteriously misplaced, refused examination, or have actually been Neanderthal skulls, which are slightly larger than human skulls. 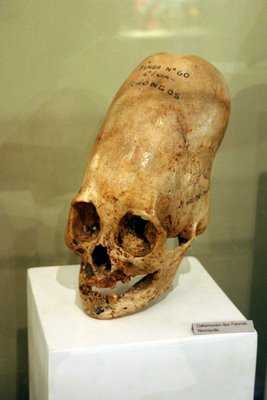 A huge number of skulls with long or deformed craniums have been found around the world, with some groups advertising them as authentic alien skulls. Infant skulls are relatively soft and pliable, and there have been many peoples who would traditionally deform them by tightly binding the heads of their babies for several months, similar to the Marken people. Skulls deformed in this way predate written history, and every skull examined with DNA tests has been shown to either be that of a modern human or a Neanderthal. More recently, various Germanic, American, and native Australian people have practiced skull deformation, and is still done in a small number of places today. It is thought to be done for aesthetic reasons or to show social status, and if done correctly, does not cause brain damage. 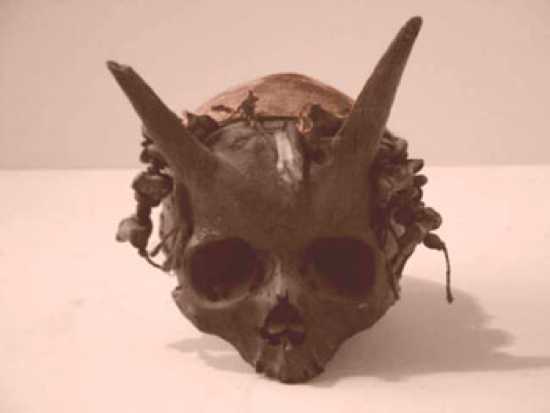 There are many claims of horned human skulls being found; however, very few have ever been physically presented for independent inspection. Although peculiar human skin tumors can appear to be horns, they are not part of the skeleton and are more similar to fingernails than true horns. The horned skull stories probably began when a large number were reported to have been found in Pennsylvania that suspiciously vanished before they could be studied by experts. Some stories even claim that they had two rows of teeth or demonic powers. Although some versions insist that experts have verified horned skulls to be genuine, the cited experts either do not exist or deny the verifications they are claimed to have made. Similar to horned skulls are crested skulls, which are quite real and belonged to paranthropus, a genus of hominids with huge jaws for chewing seeds and roots. Their powerful jaw muscles were attached to the skull crest, much like in modern male gorillas. 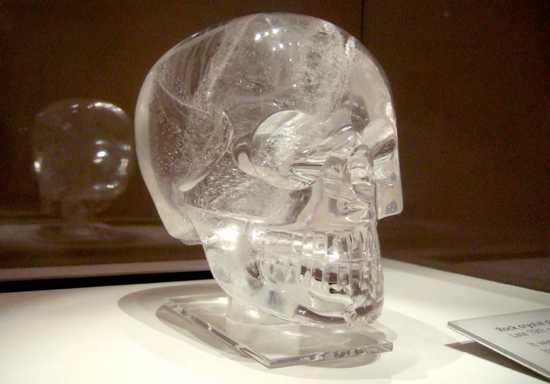 According to legend, these skulls have been circulating among collectors and museums since the late nineteenth century. They were crafted over 3000 years ago by the Mayans or Aztecs with the help of aliens, and were the center of strange mysticisms. Touching one would heal you and give great power. There were 13 in total, although we still have not recovered them all. If you bring all 13 together you would have the power of a god. Unfortunately, all of the skulls examined thus far were made in Europe, have been dated to be less than two centuries old, most being far younger, and there are no Mayan or Aztec legends pertaining to them except those which were written based on what had been said after the skulls were found rather than on actual archaeological evidence. Although beautifully made, these skulls and their associated legends are nothing more than an elaborate hoax. It is still a mystery whether they were all made by one person, if one was made first and inspired others, or if they were originally intended to be passed off as real at all.