There are plenty of action movies that are just bad; plain and simple. Bad acting, script, editing, effects, you name it. This is not a list of those movies. Sure, they may have aspects of all the above mentioned, but they still manage to work. Some movies are so gratuitously cheesy that you can’t help but fall in love with them. They are so bad, they are good. They are the guilty pleasures of the film world. The nineties brought a wave of these popcorn selling blockbusters, and in many ways revolutionized modern action movies.

Think Nicolas Cage (gracing our list 3 times) performing useless somersaults amidst a gunfight with John Travolta in a church, as a dozen doves inexplicably migrate through the room. Think Charlie Sheen having relations with Kristy Swanson while engaged in a high speed pursuit with policeman played by Henry Rollins. Think Keanu Reeves wrestling with a laid-back California surfer accent, and Patrick Swayze with his inexplicable karate moves. These movies are perfectly awesome, dripping cheese sandwiches. 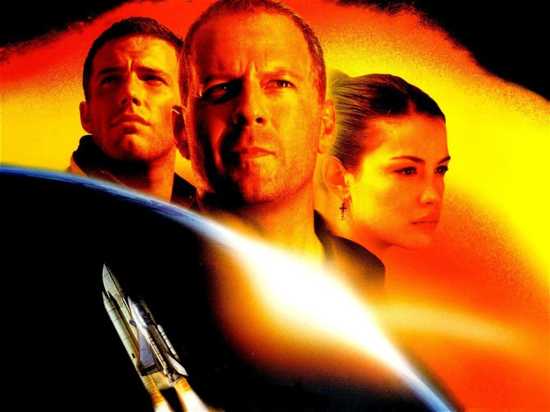 This movie is filled with a gratuitous amount of corny one-liners. This is an example of a perfect “F” movie; so bad it is good. The plot follows Bruce Willis, a master oil driller, and his team of predictable misfits. The team of misfits is the last line of defense against an asteroid “twice the size of Texas” (why is Texas always used as the standard for measuring asteroids in movies?) heading straight for Earth. The team is charged with the task of boomeranging around the moon to generate enough speed to land on the asteroid. Once on the asteroid they are supposed to drill into its core and blow it in half with a nuke. No problem.

Cheesiest Moment Award: Before heading into space, A.J. (Ben Affleck) and Grace (Liv Tyler) share a painfully cliché scene. As they are holding each other, and getting all mushy gushy, Liv Tyler says, “Baby, do you think it’s possible that anyone else in the world is doing this very same thing at this very same moment?” To which A.J. replies, “I hope so, otherwise what the hell are we trying to save?” 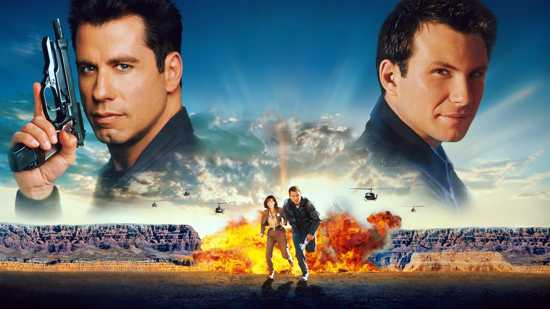 The secret sauce to a successful John Woo movie: explosions, somersaults and John Travolta. John Woo leads the pack in physics-defying explosions. Woo’s explosions have conquered the air, land, and sea, whether it be a helicopter, train, motorcycle, or boat. Thank goodness we don’t live in a Wu-Physics world otherwise bicycles, skateboards, pogo sticks, and horses would be exploding all the time.

Cheesiest moment award: Christian Slater, Delroy Lindo, and Frank Whaley come to the conclusion that Vic Deakins (John Travolta) has duped them, and that he is in fact heading in the opposite direction of where whey they originally thought. After pleading with Lindo to chase down the bad guys, Lindo responds with, “Captain Hale, do you know what rules are?” Hale replies, “Yes.” Lindo declares, “Good… Because I’m about to break them.” [Cue testosterone inducing action music.] 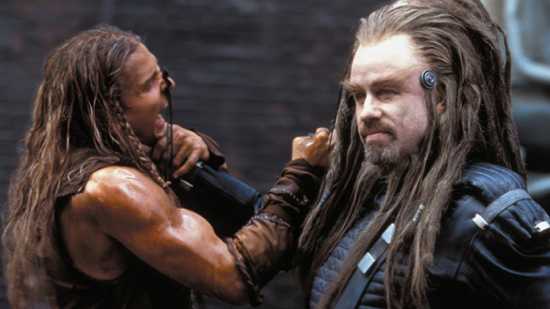 This one walks a fine line between being very cheesy and absolutely terrible. Even L. Ron Hubbard would have been offended by John Travolta’s atrocious acting in this beauty of a film. The movie shamelessly wastes 118 minutes of your life that you will never get back, save for one glorious scene in which John Travolta delivers the most poorly written and acted line in the history of film.

Cheesiest Moment Award: In an all-time classic cheesy scene, Travolta complains about his new role with the bad guys, “I can assure you, that I was not groomed since birth to have some cushy job that even a moron like you could perform! While you were still learning to spell your name [emphatic]… I was being trained to conquer galaxies!” 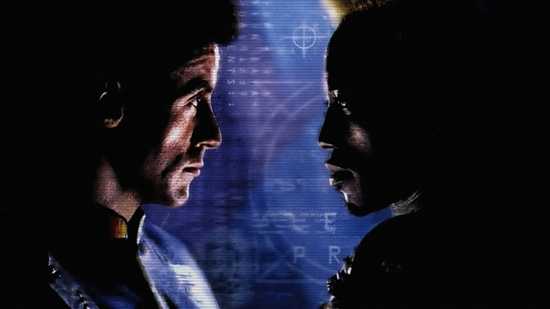 115 glorious minutes of John Spartan (Stallone) and Simon Phoenix (Snipes) running, yelling, diving, and dropping unforgettable one-liners. The concept of the movie revolves around Stallone who was cryogenically frozen because he was too violent as a police officer, and accidentally, you know, killed some people. Apparently if you do your job too well, they will throw you in a giant block of ice and freeze you for thirty-something years. They thaw him out in 2032 to capture his arch-nemesis Simon Phoenix, who for some reason has a bleached blonde half Afro. And how about the character names John Spartan and Simon Phoenix? Only in an action movie can you get away with names like that.

Cheesiest Moment Award: Throughout the entire movie Simon Phoenix refers to himself in the third person, often saying “Simon Says…[insert cheesy command].” At one point of the movie, Phoenix declares, “Simon says… Die!” It was an unintentional hilarity. 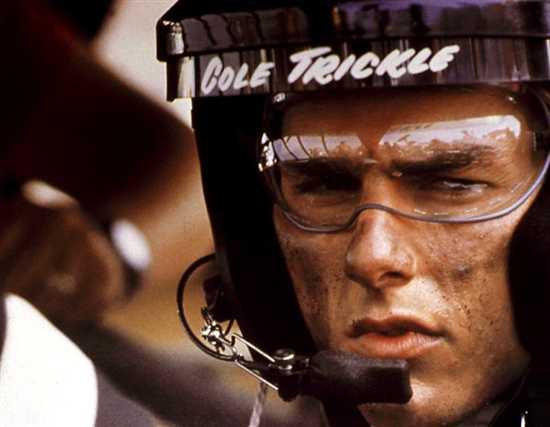 Days of Thunder is the oldest movie on the list, barely making the cutoff. But thank goodness it did. What list would be complete without Cole Trickle (Tom Cruise) spending 110 minutes trying to convince us that he is a the best Nascar driver in the world, after only haven driven a couple months? The cheese is spread on thick the entire movie, ranging from Harry Hogge’s (Robert Duvall) monologue with a car, Tim Daland (Randy Quaid) desperately trying to be a tough bad guy, a destruction derby race on the beach, and a romance between Dr. Claire Lewicki (Nicole Kidman) and Cruise.

Cheesiest Moment Award: The romance between Cole and Claire starts with Cole grabbing Claire’s hand and placing it on his groin declaring, “I think this is what you are looking for.” Earlier in the movie Harry Hogge surprises Cole with a stripper disguised as a police officer. As a result, apparently Cruise’s character thinks every woman is a stripper.

Dennis Quaid is entertainingly unbelievable, in everything he does. Dragonheart is shamelessly fun to watch, despite Quaid’s inability to act his way out of a paper bag. The movie picks up years after Draco, a dragon with the voice of Sean Connery, gives half his heart to save a young prince. Bowen (Quaid) is a dragon slayer hell-bent on a mission to kill the dragon responsible for corrupting the heart of a ruthless king. The film is a classic “buddy movie” as the two supposed enemies team up and befriend one another against a common enemy. As cheesy as this movie is, it stills seems to pull at your heartstrings at the end, courtesy of Randy Edelman’s great score.

Cheesiest Moment Award: While on dragon hunting business, Bowen corners Draco into his home, a small cave under a waterfall. Bowen approaches Draco for the kill with swashbuckling pride. Draco declares, “Since you seek a profit, we might as well begin.” To which Bowen replies in as gravelly and gleeful a voice as he can manage “Oh don’t flatter yourself, it’s not the profit, it’s the pleasure!” 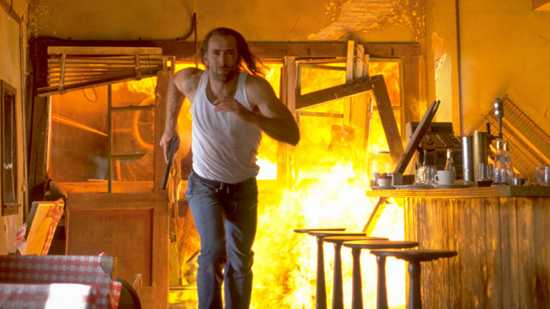 Who doesn’t believe the sincerity in Nicolas Cage’s voice when he says “Put the buunnnaay back in the box” or “Tie a ribbon ‘round the old oak tree, cause this boy’s comin’ home” in his best Southern drawl? Where he managed to dig up that atrocious accent, I don’t know, but I can’t get enough of it. The movie follows Cameron Poe (Cage) who was imprisoned for accidentally killing a man who was trying to rape his fiancé. The judge sentenced Poe to prison declaring, “You are a deadly weapon and are not subject to the same laws as other people that are provoked.” Which laws? Who made these “special laws”? I think everyone watched that scene and thought, “Ummm, huh?”

Cheesiest moment award: One of the cons aboard the “flying prison” double crosses Cyrus “The Virus” (John Malkovitch) by fleeing without him on a small Cessna airplane. John Cusack causes the con to wreck the plane before it can take off, causing it to spew jet fuel everywhere. As the con stumbles from the wrecked plane – completely covered in jet fuel – he says to Cyrus, “Cyrus we were coming to get you! Cy-” Cyrus cuts him off, “-anara” and throws a lit cigarette on him, blowing him up. 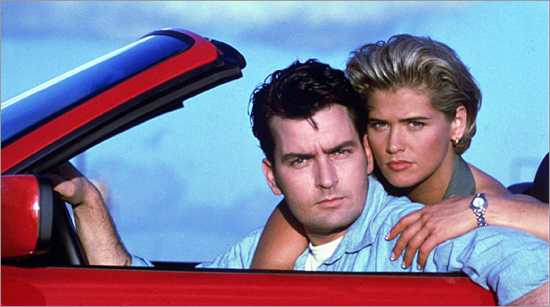 This entire movie is a bubbling, drippy, cheese sandwich. The story revolves around Jack “The Red-Nosed Robber” (Charlie Sheen). The premise of the movie being Jack has escaped from prison after being wrongly accused of being the Red Nosed Robber, a serial bank robber who dresses as a clown. The story picks up with Jack robbing a gas station using a candy bar as a fake gun, and kidnapping Natalie (Kristy Swanson).

Cheesiest Moment Award: At the very end of the movie Jack is surrounded by hundreds of police officers. He has no way out. After he gives himself up, Kristy Swanson hijacks a helicopter – yes, a helicopter. The two fly off to Mexico, have kids and live happily ever. Deliciously cheesy, indeed. 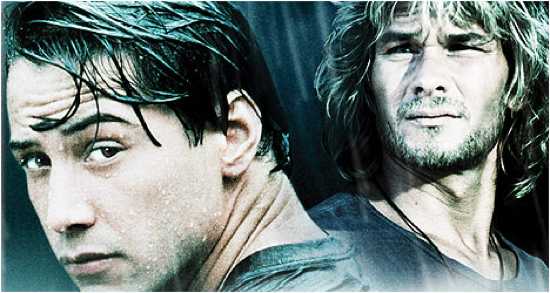 Where to start with this awfully great movie? As an actor, Keanu Reeves is a flaming dumpster fire. While he may have the personality of a roof shingle, his movies never cease to entertain. The movie follows a budding young detective Johnny Utah (Reeves) and his laughably stereotypical jaded mentor Pappas (Gary Busey). Reeves goes undercover posing as a surfer to find a gang of surfers thought to be robbing local banks, cue: Bodhi (Patrick Swayze). Bodhi is the local surfing legend, and inexplicable karate and Zen master.

Cheesiest Moment Award: Tie: While chasing Bodhi from a bank robbery, Johnny Utah lands on his bad knee and hurts himself so badly he can’t run. Knowing Bodhi is going to escape, he aims his gun at him. Bodhi turns around and gives him a genuine “puppy dog” look as the camera zooms in on his dreamy blue eyes. So dreamy, in fact, that Johhny Utah can’t pull the trigger. He instead decides to aim the gun straight up in the air screaming “Aaaahhhhhh!!” unloading the entire clip.
In another scene Johnny Utah almost has his face shoved into a running lawnmower by a bad guy (Warchild). Pappas comes to the rescue, shooting the lawnmower (instead of, you know, the bad guy) which promptly shuts off. Pappas points the gun into Warchild’s face and says, “Speak into the microphone, squid brain.” 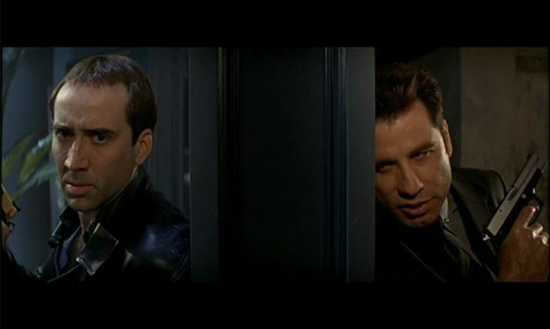 In action films, there is a fine line between cheesy and sophisticated. John Woo shamelessly poured cheese all over that line, and Face/Off is the result. This is not to suggest that Woo poured recklessly, and that the result was a complete mess, on the contrary it was done quite artistically. The film is tightly edited and the gunplay is filmed to present over-the-top action in all its glamor.

Cheesiest moment award: As Sean Archer and Caster Troy battle each other on the land, sea, and in the air for the entirety of the 2 hour 18 minute film, they eventually end up fighting for the steering wheel of a speeding boat while simultaneously attempting to kill each other with fists, anchors, propellers, and spear guns. They briefly stop fighting in order to brace themselves for the imminent impact of their boat with a dock before a small beach shore. The next moment has what you might describe as one of two different things: an operatic quality or so cheesy you can’t take it all in at once and must avert your eyes. The moment the boat impacts the dock, it goes flipping into the air in glorious slow-mo with Archer and Troy flying through the air in front of it. The boat explodes as they land safely on the beach.