It is no secret that I love food lists and food facts – many of my lists are indeed food related. Another of my loves in life is books – so it seemed a good idea to combine the two and produce a list of the best books out there for people who appreciate food. I have intentionally left cookbooks off the list as they are a whole other topic altogether. Some of these books are not just for lovers of food – they are books that will entertain everyone. 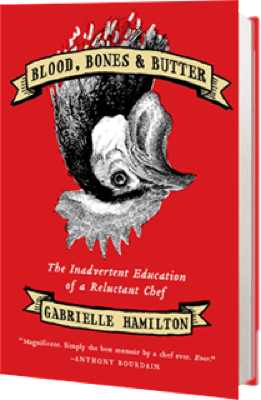 This New York Times bestselling book is by Gabrielle Hamilton, owner of the acclaimed “Prune” restaurant in New York. This book describes her journey – from childhood – through some of the most amazing food experiences imaginable. The Amazon review gives a little insight into what you can expect when you buy this book: “[Gabrielle] moved to New York City at 16, living off loose change and eating ketchup packets from McDonald’s; worked 20-hour days at a soulless catering company; traveled, often half-starved, through Europe; and cooked for allergy-riddled children at a summer camp.” Her ability to tell a good story is heightened by her clever use of the pen. She doesn’t hold back either – with a few sharp barbs thrown into the mix. A very enjoyable read which comes highly recommended.

Gary Taubes is the latest advocate for a low-carbohydrate diet. But the reason I have selected this book for the list is not the principles of eating that he advocates but rather the fact that it is the result of an extensive compilation of all of the diet and food studies done in recent times. He proves (with a large number of citations) that the modern food pyramid is based on a poorly executed study which intentionally left out anything that went against the pre-conceived notions of the study team and that it is the modern guidelines for “healthy eating” that have, in fact, given us a society full of heart disease and obesity. He explains (in a way anyone can understand) how the foods we eat are converted into fat and how insulin controls hunger and where the fat is sent in our body (fat cells or muscle cells). This is the shorter less-complicated version of his blockbuster book “Good Calories, Bad Calories: Fats, Carbs, and the Controversial Science of Diet and Health“. The book doesn’t include a diet but it does have an appendix which names and shames the foods we should avoid: bread and sugar (the stuff the government tells us should be the main part of our diet). Above is Taubes giving a talk at Google about his work – it is fascinating and well worth watching. 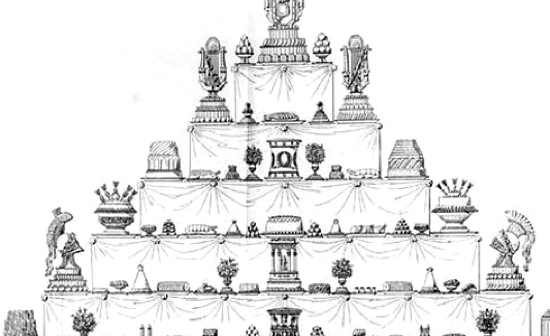 Marie-Antoine Carême is the father of modern French cooking. He is known as “The King of Chefs, and the Chef of Kings” He was employed but such famous families as the Rothschilds and worked for Napoleon, King George IV of England, and Tsar Alexander I of Russia. He was especially famous for his pièces montées – immense decorative table centers made of food. This book tells the story of his life which gives great insight into the birth of modern cuisine. It also contains lovely illustrations of some of his amazing pièces montées. This is a must-have book for those interested in extravagant food and food history.

7
Food: The History of Taste 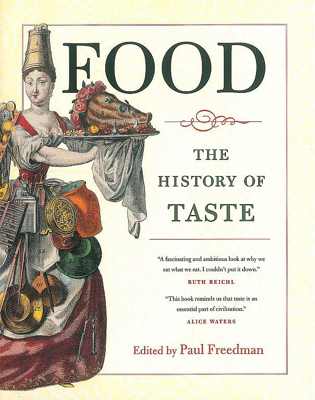 This stunning book is full of beautiful illustrations – it is like an encyclopedia of the history of eating. It covers human food tastes and eating habits from cavemen to modern men. It is incredibly detailed but not stuffy so reading it is quite easy. He covers food eating in prehistory, then Ancient Greece and Rome, Imperial China, Medieval Islamic cuisine, and so much more. Anyone with a love of history and a love of food or eating needs this book – it truly is the best volume available on the complete history of what we put down our throats.

6
The Man who Ate Everything 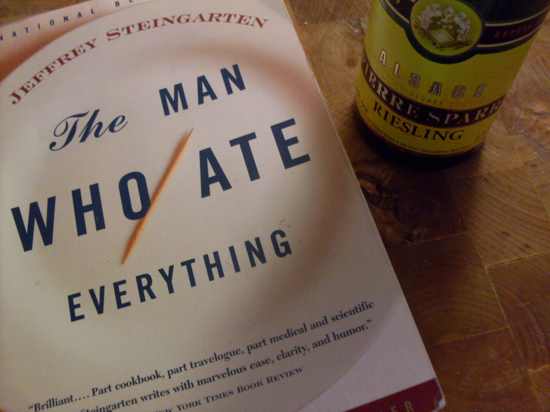 The Man who Ate Everything is the first compilation of food articles written by Vogue food writer Jeffrey Steingarten. His writing style is warm and amusing and virtually every tale will have you laughing. It is not hard to see why he was appointed to his prestigious place at Vogue. His essays include “Salad: the silent killer” and he describes his various travels around the world on his food adventures seeking out the best foods. In his attempt to perfect the french fry he even goes so far as to deep fry the potatoes in a large vat of horse fat! For me this was one of the most enjoyable books on food – so much so that I bought his second book (below) because I couldn’t get enough of his writing style.

5
It Must’ve Been Something I Ate 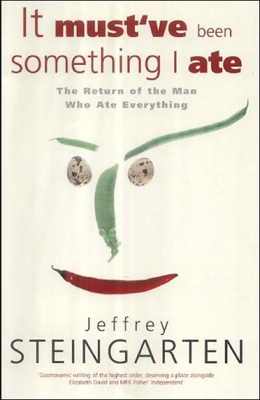 This book is a follow on to the book above “The Man who Ate Everything.” It contains more essays and wit from the great writer Jeffrey Steingarten. One of the most amusing stories is his attempt to make the famous (and quite bizarre) Cajun dish a turducken: a turkey stuffed with a duck stuffed with a chicken. He debunks many myths – such as Chinese Restaurant Syndrome and lactose intolerance and he tries to create the perfect pizza crust in his home oven. The writing style and the variety of articles makes this a good bedtime reading book – not only will you love reading it, you will learn something on every page.

4
The Art of Eating 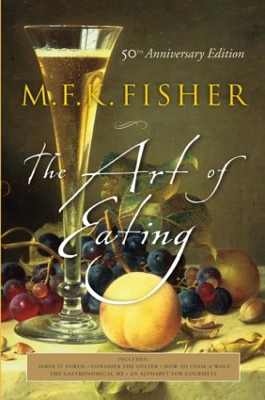 Author M F K Fisher wrote more than 27 books on food and cooking (including a translation of Brillat-Savarin’s “Physiology of Taste” – item 1). Her books are an amalgam of food literature, travel and memoir. The principle underlying all of her books is that eating is an art form – and in this she tells you how it’s done. In this particular book (chosen for this list because of its essay format) she gives culinary advice to World War II housewives plagued by food shortages, writes portraits of family members and friends and so exudes her passion for food and cooking that it is a book every cook (home or otherwise) needs on their shelf. The Art of Eating won the James Beard Cookbook award.

3
On Food and Cooking 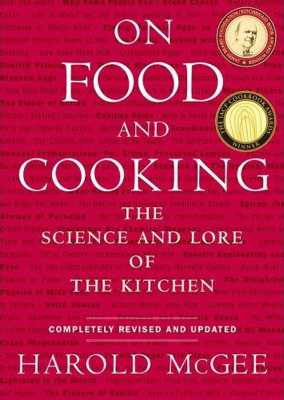 If you love myth busting and delicious food – this is the book for you. Harold McGee is the foremost authority on the dos and don’ts of cooking. Mario Balti reviewed the book thus: “McGee’s immeasurable knowledge and infinite wisdom have hugely influenced the state go gastronomy. This book covers topics I have never even heard of in a comprehensive end-all way.” The book covers the history and science of milk and dairy, eggs, meat, edible plants, alcohol, sugars, and so much more. This is an essential encyclopedia of everything there is to know about food. McGee also wrote “Keys to Good Cooking” which I would also recommend. It has the perfect methods for packing or frying eggs and so much more. Every page is a wonder.

This book is the one that most resembles a cookbook in that it contains recipes; but there the resemblance ends. Modernist Cuisine is a recently published book (in 6 volumes) which looks at virtually every aspect of cooking and explains it in scientific detail. You learn where the flavor of BBQ meat comes from (the fat dripping into the coals which instantly evaporate giving a steam-baste throughout the cooking process), the perfect temperature to cook virtually everything (vegetables and meats, etc.) and so much more. This is the food book of all food books. The volumes are huge and the book is filled with some of the most incredible food photography you will ever lay your eyes on. I cannot recommend it enough. It does come at a high price but it is well worth it. The authors have also taken recipes from some of the finest modern restaurants and adapted them based on their science and hundreds of taste tests to give you perfect recipes for everything – with all ingredients measured in grams (including liquids) so you can duplicate their efforts exactly. A bonus is the 6th volume kitchen manual – a book containing all of the recipes in the 5 volume set printed on plastic pages so you don’t have to worry about kitchen spills. This book has innovation at every step. Watch the video above to see the thinking behind the book and discover how to make the best hamburger ever – with sodium hexaphosphate, liquid nitrogen, and other unusual ingredients. You can see some of the photography from the book here.

1
The Physiology of Taste 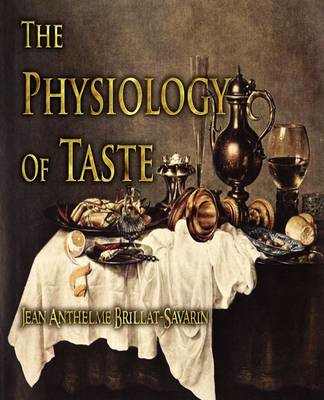 Jean Anthelme Brillat-Savarin wrote this book – a book which remains today the most famous book about food. It was first published in France in 1825 and has been constantly in print. He discusses the rise of restaurants to diet (interestingly, he recommends a low or no carbohydrate diet for the obese – see item 9) and he even includes a fattening diet for ladies who wish to fashionably plump (not so fashionable these days). The fattening diet includes large amounts of sweet food, bread, pasta, and flour. It can’t be ignored that it took 250 years for Dr Atkins to republish the same principles under his own name. It is a book of essays he wrote during the last years of his life as a Judge in Paris. The book is full of witty comments – social and historic and it is very hard to put down.