India is a place of many contrasts – as the cliche goes. It has a booming modern economy with a particular strength in IT, as well as ancient bustling markets which looked exactly the same five hundred years ago – minus the cellphones and DVDs.

Some Indians, fiercely embracing exactly the same modernity that those in the West take for granted, resent that their country is still known for its sacred cows and its bizarre rituals. Stereotypes can be difficult to swallow. But they shouldn’t resent this list: it reflects only one small and fascinating shade of the enormous, incredible, multi-faceted country that is India. 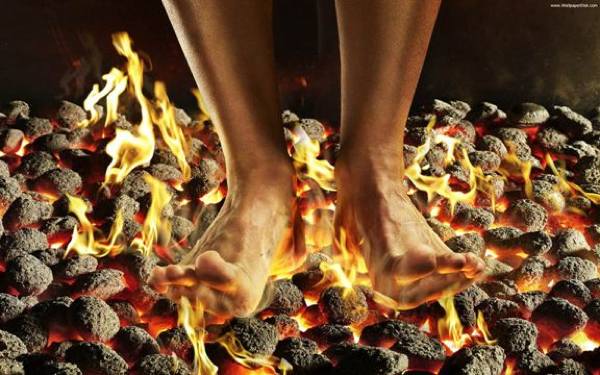 People from South India ‘celebrate’ the Theemithi festival by walking barefoot across a pit filled with burning hot firewood, or sometimes glowing charcoal. The fire walking is done in honour of the Hindu goddess Draupati Amman – so rather than hurrying across the pit, the devotees have to sdo it slowly, as though it’s a walk in the park.

The ritual begins when the head priest traverses the pit with a pot on his head, filled with sacred water. He is then followed by other men, who seek to prove their piety by withstanding the pain. Participants suffer from burns on their feet – and sometimes worse injuries, on the all-too-common occasions when they fall into the burning pit. 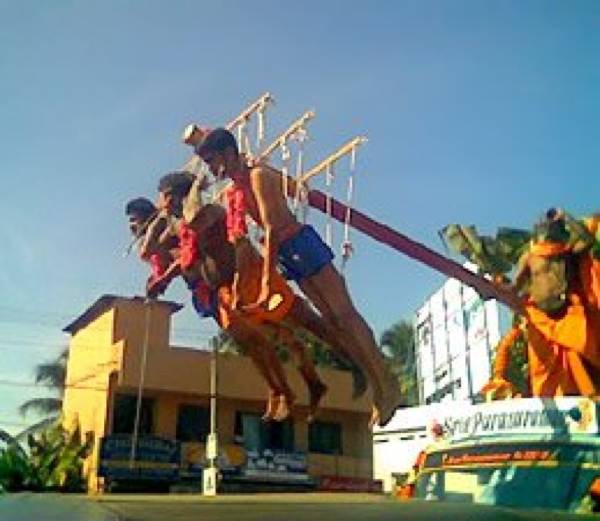 The thookam festival sees the backs of devoted Hindus pierced by sharp hooks; the men are then lifted off the ground onto a scaffold using ropes. Sometimes, children are even tied to the hands of the participants. Originating from southern parts of India, the festival has now been banned by the Indian Government after continued pressure from human rights organizations. 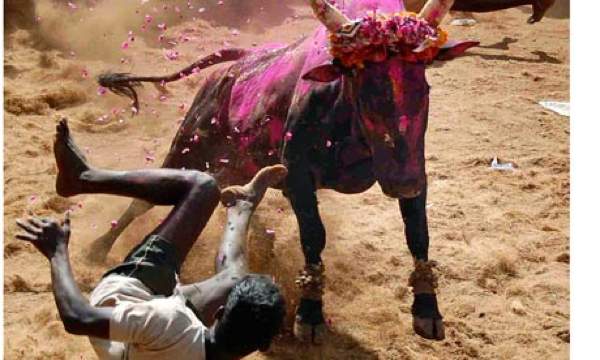 Unlike its Spanish counterpart, Indian bull-fighting, or Jallikattu, is done without the help of any rope or weapons. Thankfully, the bull’s life is also spared afterwards, bovines being famously sacred in India. Celebrated during Pongal (harvest thanksgiving), this is one of the most dangerous sports played in India. Youth, ardent for some desperate glory, usually strive either to tame the bull or at least to hang on to the bull for a reward – usually money.

More than a hundred people have been killed in southern India over the past two decades. A case against Jallikattu is ongoing in the Supreme Court of India, which is considering an outright ban on the sport. The bulls are force-fed alcohol; their eyes are sprinkled with chili powder, and their testicles are pinched in an effort to infuriate them. 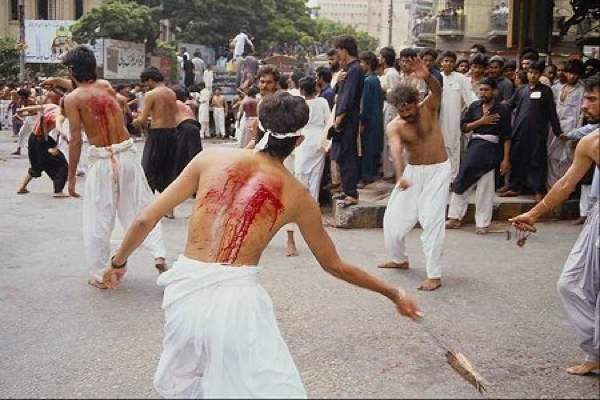 Muharram is the first month in the Islamic Calendar, and this was the month which marks the anniversary of the Battle of Karbala, when Imam Hussein ibn Ali was killed, followed by 72 warriors who were killed over the next ten days. Shi’a Muslims in India, and also other countries like Pakistan and Bangladesh, mourn this event by flogging their naked bodies with a bunch of chains known as ‘Matam’. Sometimes, these Matams also contain razor blades or knives. 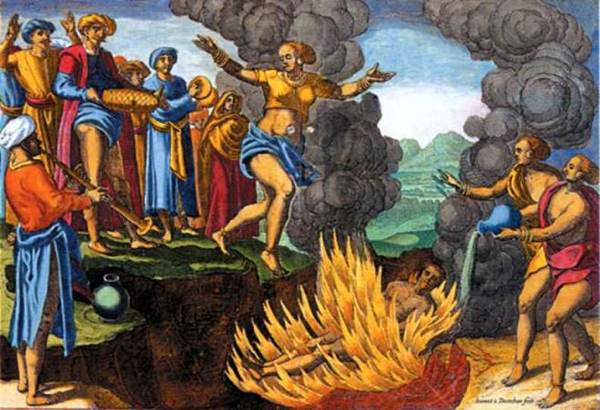 Practiced extensively in the 17th century, Sati was a ritual whereby a widow – voluntarily or involuntarily – would lie down next to her dead husband before being burned alive along with the corpse. The widows who were caught trying to escape this fate, despite the intense social pressure to self-immolate, would be tied to the burning structure, or their limbs would be broken in order to prevent more attempts to flee. Sometimes, they would even be pushed back with bamboo sticks into the burning funeral pyre. Even though it was banned by the British colonial government in 1859, it was still practiced in some parts of India. It is still banned under the current Indian government, with harsh penalties for those few who still insist on forcing innocent women to their deaths. 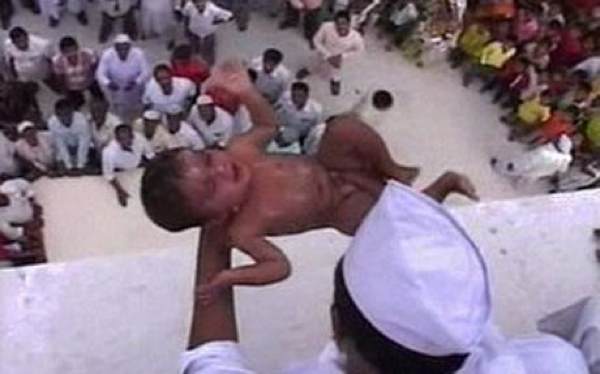 Every year in the month of December, more than a hundred babies are tossed from a temple roof into a crowd below. They plummet 200 feet, to where a group of men stand waiting with a cloth meant to catch them. The reason? Married couples – looking to be blessed with, perhaps ironically, more babies – take part in this event. It is also said to bring good health and luck to the family. The Indian government is looking to set a ban on the jaw-dropping ritual, which takes place in the southern state of Karnataka. 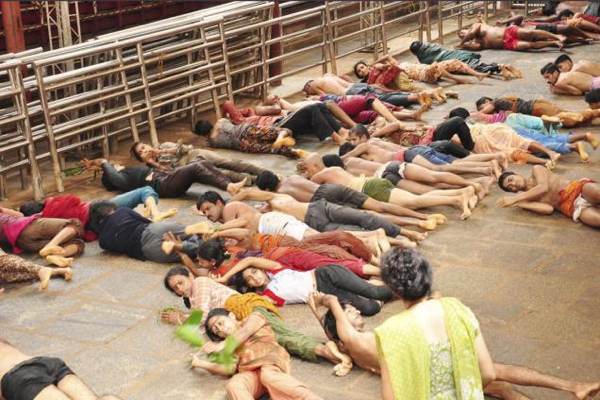 Enter certain temples in Karnataka, and you’ll be ordered to stop, drop and roll. Supplicants roll their bodies over scraps of food discarded by Brahmins – the highest, priestly caste in India. The act of rolling is practiced by all of the castes lower than Brahmin, and is said to cure skin disease.

Made snana has been in practice for over 500 years, but it is now on the verge of being banned. Though restrictions in certain temples had been put up in recent years, these restricitions were lifted after protests from devout Hindus. Members of the Indian government have therefore decided to educate, rather than impose their will upon the people. Good luck to them. 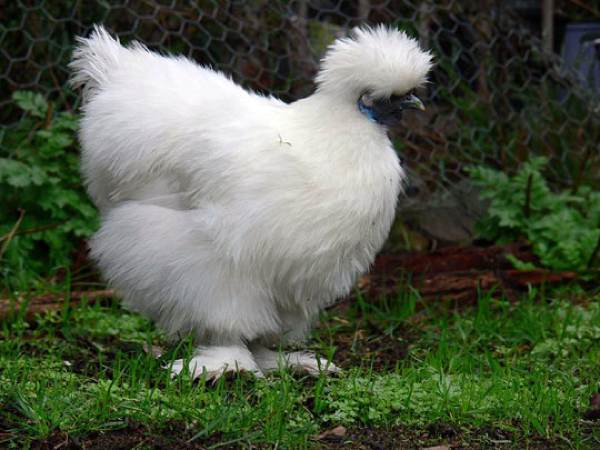 In Hinduism, exorcisms are carried out by various means, according to the traditions of different regions. One of these methods involves the slaughter of a white chicken: the bloody parts are strewn around the house by the Pandit or priest, who is usually in charge of performing the exorcism. The possessed person in question is then addressed as a demon, or by the name of a dead relative who may have become a demon within them. These demons, or spirits, are said to be afraid of white chickens. In some cases, the demon is reported to have screamed ‘I go! I go!’ through the possessed body, before apparently leaving. Supposedly, this is followed by the immediate revival of the exorcised person, who appears to wake from something like a trance, with no memory of the events or of the chicken. 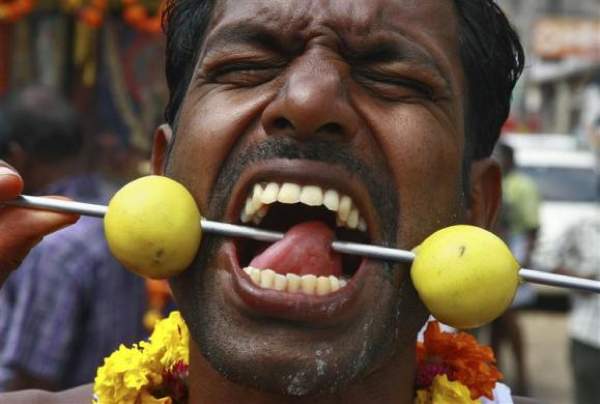 Not studs, but long and sharp needles are used to puncture the tongue. The needles – usually made from wood or steel – can be so long that the tongue is forced to stick out of the mouth permanently, unable to retract. The piercing is common a number of religious festivals. In some regions, young boys and sometimes girls take part in the ritual piercing. The ones who are going to pierce their tongues wear a garland around their necks for a day before the ceremony. The piercing ceremony is usually followed by dancing and merrymaking. These practices are also seen in countries other than India, in southern parts of Asia. 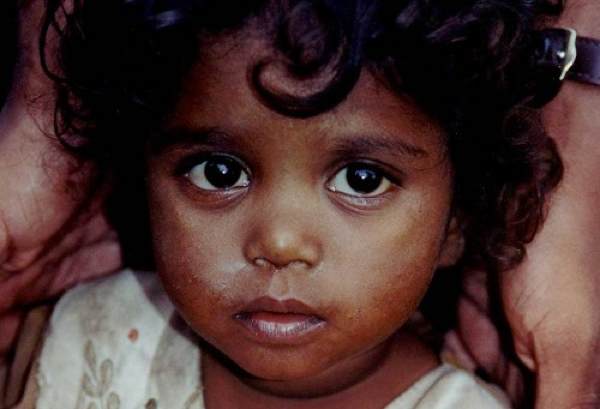 This social evil exists not only in India, but also in many other parts of the world whose populations see male children as more desirable than female children. Preference for a male child can be so extreme that female infants might be killed, or set afloat in the river. Illegitimate girls, especially, were vulnerable to murder prompted by shame: only if a man agreed to marry the mother-to-be could the child often be saved – but this hardly ever happened. Infanticide was banned in the 19th century.