The universe is a strange place—and it’s therefore only natural that some of the maps we’ve used to navigate it over the years are rather strange too. Here are ten of the most bizarre:

10
The Bible Map of the World

The map, created by Professor Orlando Ferguson in 1893, was drawn with the intention of destroying the theory that the Earth is globe-shaped. You have to admit though, his case is bulletproof—as long as you exclude the four angels standing the corners of the Earth, none of whom seem to be too upset about the meteor that’s about to smash into the planet. Or the fact that the oceans are curved. Or that the sun and moon are suspended on a giant child’s mobile. The list goes on.

9
Hark Hark! The Dogs Do Bark! 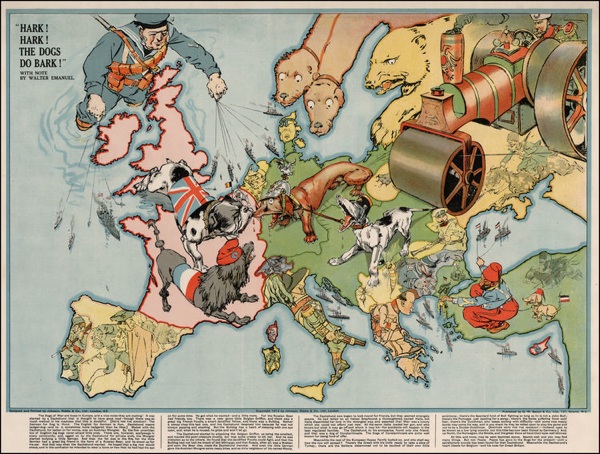 This map, dating from 1914, was created to provide a more light-hearted view of the then-raging World War One, because for some reason, the newspapers were finding that the constant stories about bloodshed and slaughter were making their readers a bit depressed.

Instead, they should have advertised this as an alternative means of fighting wars because everyone loves to watch watch a Bulldog (symbolizing England) beating up a Dachshund (Germany), whilst the Poodle (France) yaps away at a Mongrel (Austria)—especially if it means that over a million people don’t die.

8
The Island of California 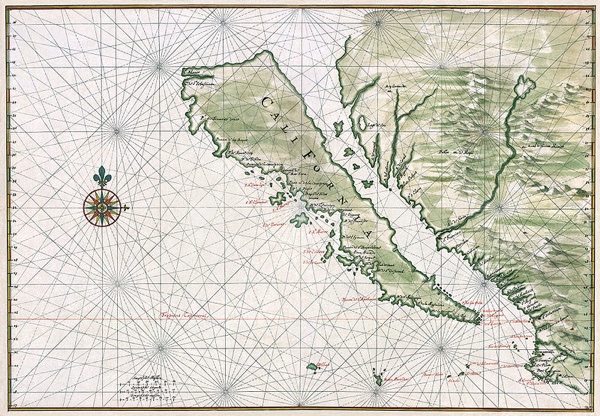 Way before the invention of Google Earth, if you wanted to go exploring, you had to charter a boat, stock up on supplies, and find a crew who were mad enough to risk sailing off the edge of the world for fortune and glory.

Unfortunately, all this preparation doesn’t always equal success. For instance, in 1533, an expedition by Hernan Cortes discovered a mystical island just off the west coast of the USA. No, it wasn’t Atlantis or the island from Lost (sadly). It was California. But before the Spaniards could discover the truth, they had to quickly sail away for some unknown reason. So, without bothering to go back and double-check, they just assumed that they were right and the Island of California was born. Incredibly, this false belief wasn’t undermined until 1774, when another expedition discovered the truth.

7
The Catacomb City of the Lizard People

If you’ve spent any time on the weirder parts of the internet—for instance, Reddit or the Fox News website—you’ll have heard of the conspiracy that the world is secretly led by a race of lizard people (including Queen Elizabeth II).

This isn’t a new theory: in 1934, a previously-sane mining engineer called G. Warren Shufelt suddenly announced to the world that he’d discovered a maze of catacombs underneath Los Angeles which served as the ancestral headquarters of our reptile overlords. Unfortunately, when the time came to explore the tunnels, he dug and dug and found . . . perhaps unsurprisingly, nothing. The city once again slept soundly that night, safe in the knowledge that their underground wasn’t occupied by a secret cult of aliens—and this reassuring knowledge survived for several decades, until the Scientologists arrived.

Before the sixteenth century, it was customary for mapmakers to position Jerusalem at the center of the Earth. After all, this whole “Christianity” thing was taken pretty seriously back then.

This map by Heinrich Bunting is probably one of the last-produced examples of this. Soon afterwards, the age of discovery and science took the world by storm—which meant that soon enough, there wasn’t a person left who thought that the world was shaped like a shamrock. 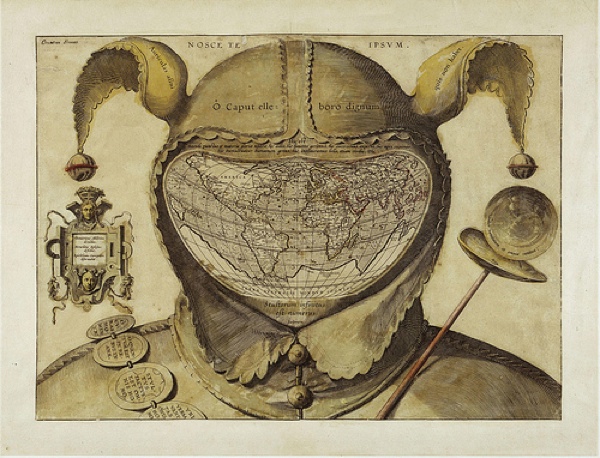 Fittingly for a map that wouldn’t look out of place on the wall of a serial killer’s apartment, no-one knows anything about this one. We don’t know precisely how old it is (although it’s estimated to date to roughly between 1580 and 1590), we don’t know who made it, and we don’t know exactly where it was made.

Belgium seems to be the most common answer to this last question and, if the gossip is true, then it would be the most exciting thing to hit that country since the Western Front. According to clever people who think about symbolism a lot, the whole thing is apparently a damning indictment of the world as being a place full of fools,  which we guess is what counted for a “burn” back in ye olde times. 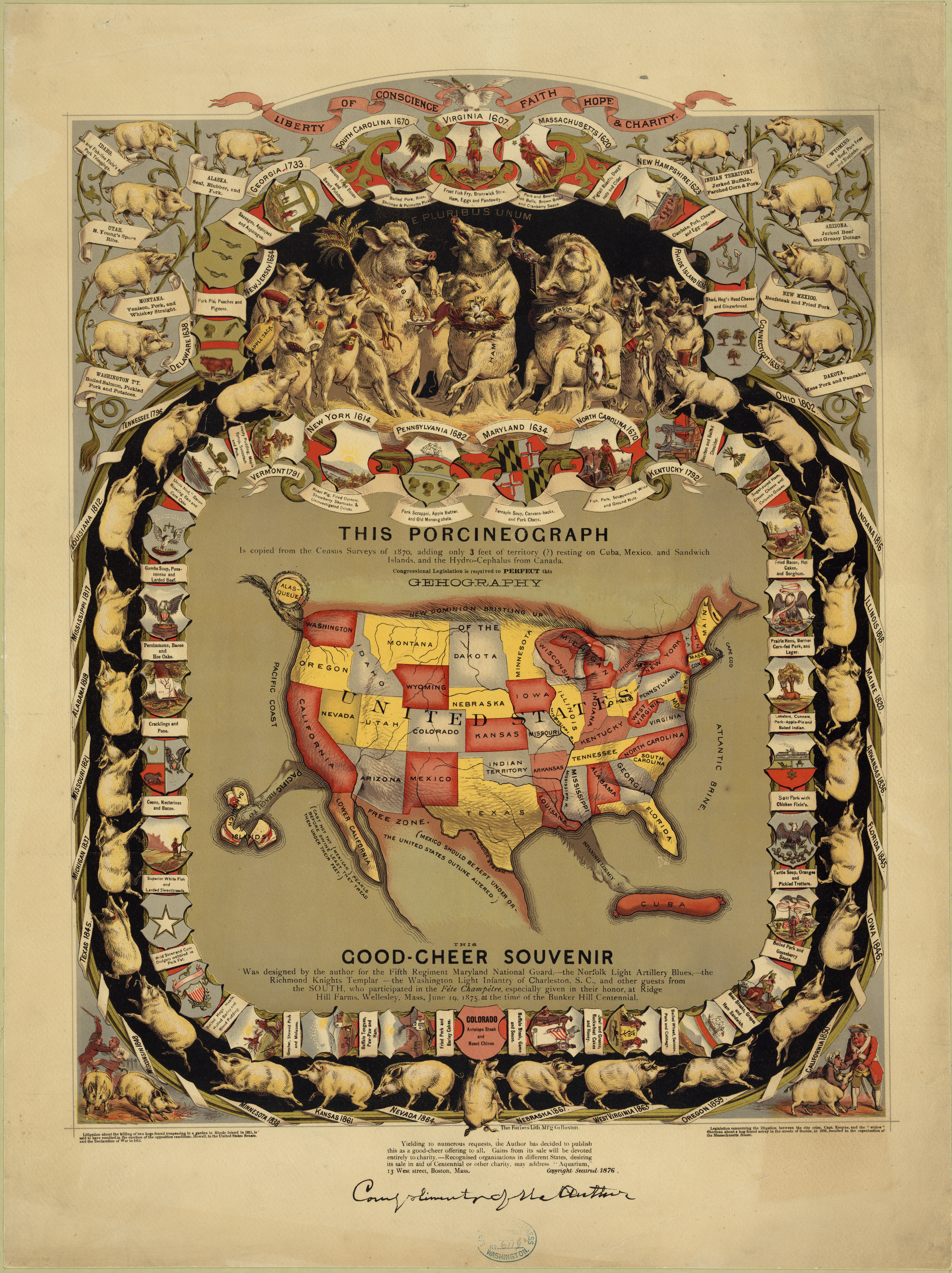 No, that’s not the name for a method of communicating with pigs; it’s the name of this delightful map by the pig-loving W. E. Baker. In 1875, Baker opened a revolutionary new farm for pigs, which he thought might help reduce the levels of food-transmitted disease. In fact, he was so pleased with himself that he even threw a party to celebrate, at which he gave everyone a copy of the map as a party favor. As you might have noticed, the map is bordered by pictures of the best pork-based fare of the state. We’d describe to you a small selection of them—but firstly there’s too many of them, and secondly it’s making us too hungry to type anymore.

3
The Land of the Octopuses 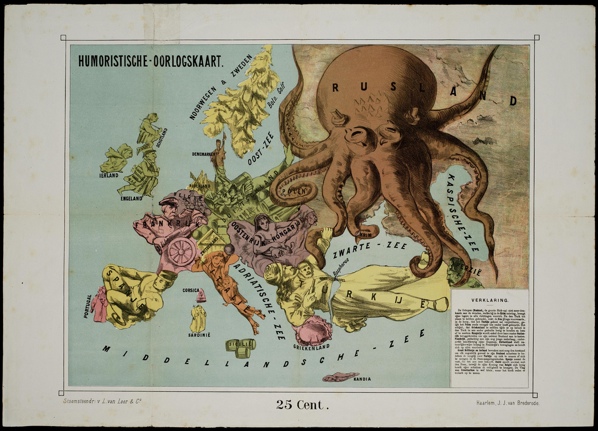 It’s fair to say that Germany and Russia combined spent most of the twentieth century scaring the living daylights out of the entire world. So, understandably, when political cartoonists were required to draw these countries, they weren’t what you’d call flattering with their depictions. Newspapers of the day were constantly filled with images of Germany and Russia as enormous, slithering octopuses spreading their tentacles over the world. We were going to question why they didn’t use a more terrifying animal, but then we realized that there’s a version depicting Stalin’s head with tentacles, so the question’s a bit moot now. 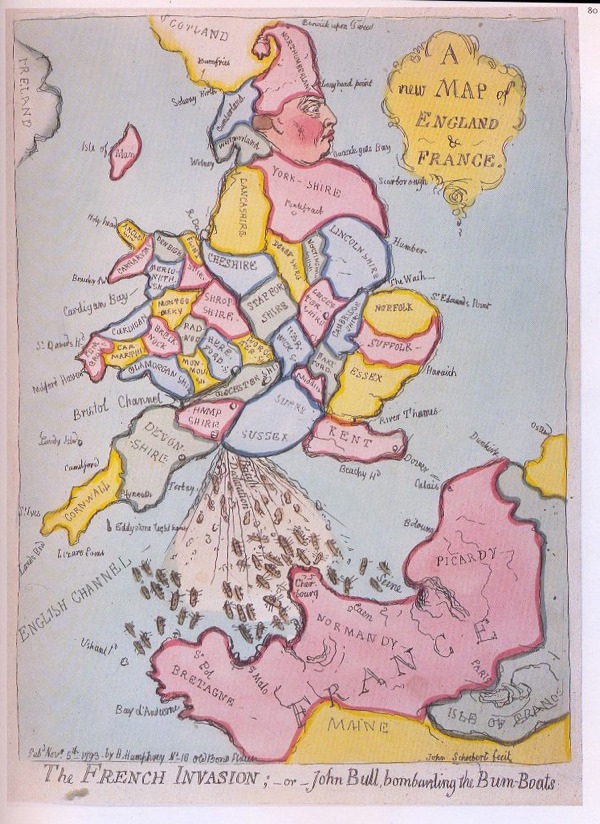 The English have a reputation across the world for being a nation of polite and well-mannered people. But this print from 1793 demonstrates that when the time calls for it, they also won’t hesitate to unburden themselves of their load, all over another country. This political cartoon was drawn by James Gillray in response to whispers about the threat of an invasion by the French. If you’re wondering, England is shaped like their unofficial mascot, John Bull, but that’s only because Winston Churchill hadn’t been born yet.

1
Geological Map of the Moon 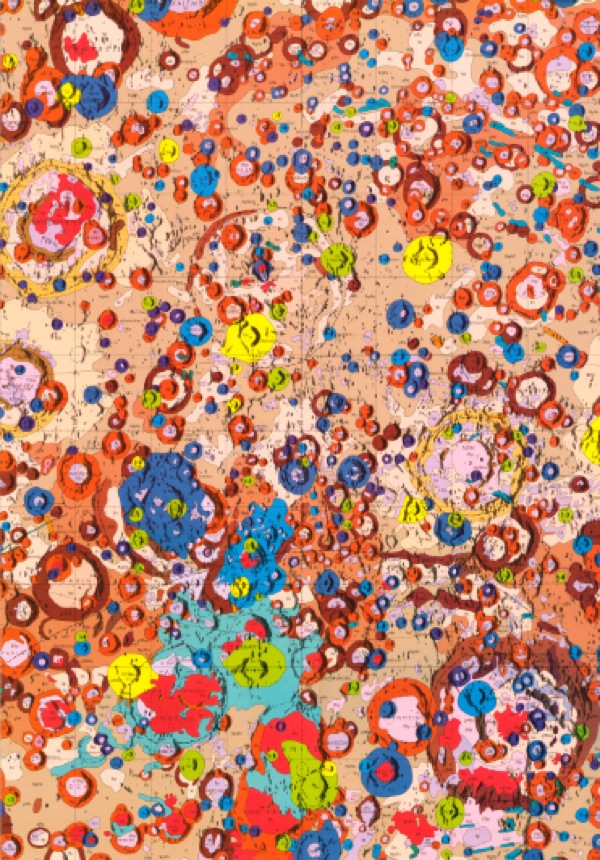 You’d be forgiven for thinking that we’ve accidentally used a picture of a piece of modern art instead of the geological map we promised. After all, it’s too bright and colorful and fun-looking to have been created by those squares at the US Geological Service. But you’d be wrong. This is actually the geology of the moon—or more precisely, the far side of the moon (not to be confused with the dark side of the moon, which isn’t nearly as bright or cheerful). The reason why it’s so colorful is simple: the scientists who created it had to color-code the different types of rock—but because there were so many, the reluctant scientists had to use every color you can imagine.

You can find more from Adam at his site or at Cracked.com. He also has a Twitter you can follow, if you’re into that sort of thing.