Humans, ever since the dawn of time, have been as curious as cats—possibly more. We deem it necessary to have an explanation for everything. This causes us to create many theories, whether it be why it snows or how a little insect flies. Little of our universe can be fully explained, but science is there to find the truth. However, before science matured to what we have today, we had created the simplest possible explanations for everything. Some cultures had the most outrageous theories. However, they are also interesting. 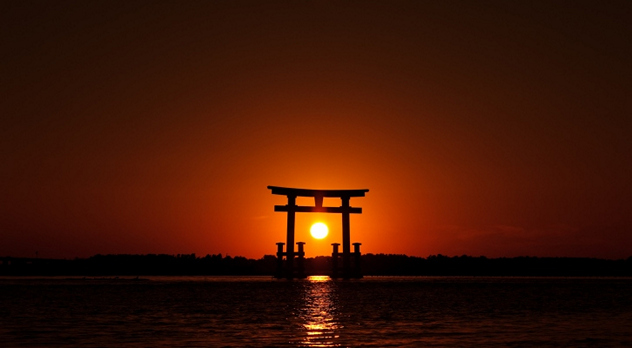 One day, Amaterasu commanded Tsukiyomi to go to Earth and pay a visit to Uke-Mochi, the food goddess. To bid Tsukiyomi welcome, Uke-Mochi vomited rice, fish, and other animals onto the Earth. Uke-Mochi then used the same method to serve Tsukiyomi food at a banquet.

Unsurprisingly, Tsukiyomi was so offended and disgusted by the act that he killed Uke-Mochi. Once Tsukiyomi returned to heaven, he told Amaterasu what had happened during his visit. Amaterasu was so displeased by her brother’s actions that she swore to never meet and face him again. Hence, when the Sun sets, the Moon flees from the Sun for eternity. 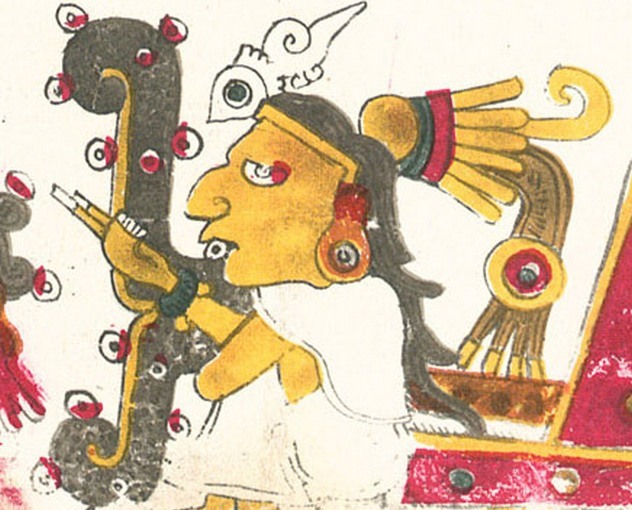 In Aztec mythology, there were four different gods who became the Sun; however, all of them perished due to feuds with other gods. After the gods had another large feud over the validity of the fourth god, the world was destroyed, and again there was no Sun god. All of the gods knew that, if a fifth Sun god took over, another feud would erupt and eventually destroy the world again. Thus, no one volunteered to become the Sun god, while darkness loomed and swallowed the world.

The Sun, however, was a vital part of the world, so the gods created a council to vote for the fifth Sun god. This time, the gods decided that the god who was picked must kill himself to save the world. Two gods were picked: Tecciztecatl and Nanauatl. 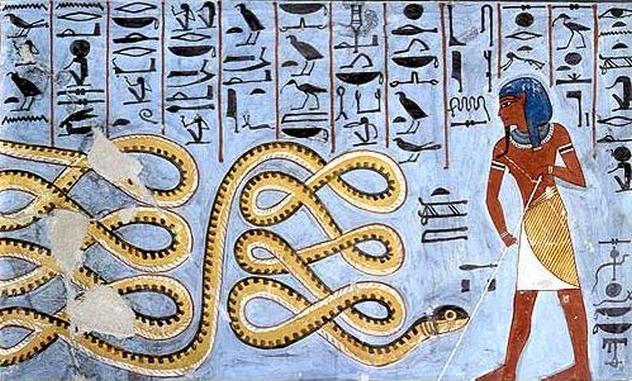 The Egyptian pantheon is one of the most famous pantheons in the world, along with the Greek, Roman, and Norse pantheons. Ra (or Re) is the Sun god in Egyptian mythology. Ra is believed to be one of the only Egyptian gods to not inhabit the Earth. Instead, he lives in the sky, due to his old age.

Ra rides on a solar bark, which represents the Sun, and travels through the 12 provinces, which represent the 12 hours of day—thus creating daytime. Ra, however, dies every sunset, which gives darkness throughout the world. In his dead form, he goes through the Underworld in his night bark. During his travels through the Underworld, he fights the snake demon named Apep. At sunrise, it is believed that Ra has defeated Apep once again. Ra proceeds to travel on his solar bark, until he dies once more.

There are two night gods. Khonsu is the newest Moon god, eclipsing the old Moon god—Iah. Khonsu travels across the world in Ra’s absence, to guide people to their destination. Iah is thought to be the reason why there are 365 days in a year.

The Lakota, a Native American tribe, used to inhabit the states of South Dakota, North Dakota, Montana, Nebraska, and Minnesota. They also lived in parts of Canada, specifically Manitoba, Saskatchewan, and Alberta. They are more popularly known as the Sioux, but this name is deemed insulting to them.

Hanwi is the Moon goddess in Lakota mythology. Wi, the Sun god, once took a mortal, named Iktomi, to replace Hanwi’s place next to him at a feast. Skan, the sky god, denounced Wi for his actions, and decided to punish him. Skan took Hanwi from Wi and gave her rule over the night. Meanwhile, he ordered Wi to only rule over the day, never being allowed to see Hanwi. Hanwi, for eternity, will be depressed due to Wi’s actions. She shows her shame by hiding different parts of her face, thus creating the Moon cycle. 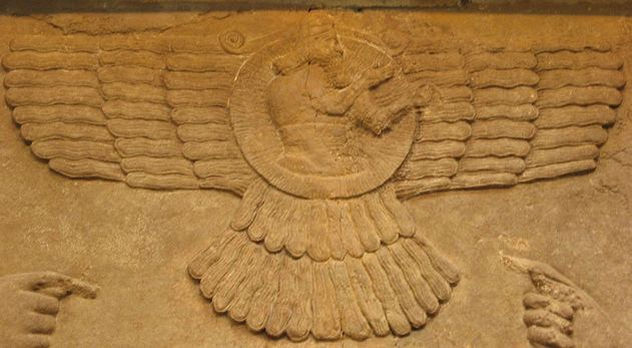 Mesopotamia is the birthplace of many of the first civilizations, including Sumerians, Akkadians, Amorites, Hittites, Kassites, Assyrians, and Chaldeans.

Shamash, the Sun god, was believed to be the child of the Moon god, Sin. He is depicted as the god of justice and equality. Shamash repeatedly rises from the east, on foot or a chariot, with Sun rays emanating from his shoulders. While he is providing sunlight for the world, he also presides over courts—for men and gods alike.

However, his duty is not limited to our world—he must also do this in the Underworld. He travels to the Underworld by descending in the west, thus creating darkness and night. In the Underworld, Shamash also presides over courts, where he judges the disputes of the dead. 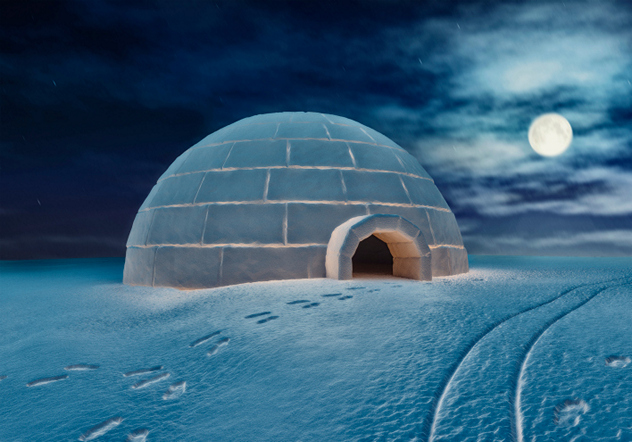 The Inuit are people of Asian origin, who inhabit the arctic regions of the United States, Canada, and parts of Greenland.

Malina, the Inuit Sun goddess, lived with her brother Anningan, the Moon god. One day, they had a large dispute and it turned ugly. During the dispute, Malina spread black grease over Anningan’s face. Regretting her decision, she ran away from their house and became the Sun. Anningan chased after her to the point where he transformed into the Moon. In this event, the day and night rotation was born.

Anningan sometimes begins to neglect his needs and begins to starve, so he gets thinner and thinner, which represents the Moon cycle. There is a more sinister myth surrounding Malina and Anningan. In this version of the story, Anningan rapes Malina. 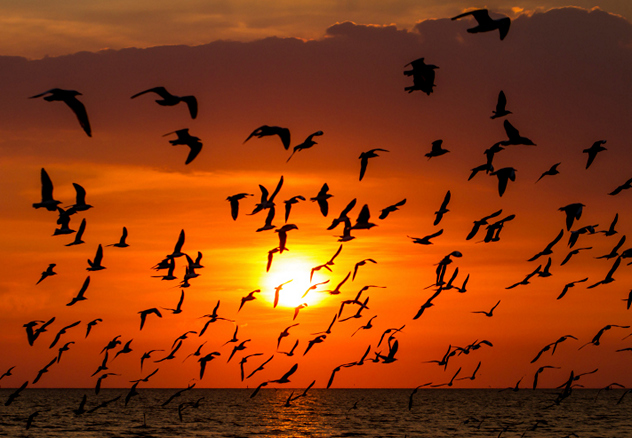 The Mamaiurans are an Amazonian tribe that inhabit Brazil. According to their mythology, the world was originally covered in darkness. This darkness was caused by the immense population of birds, who annoyingly blocked out the Sun and its light with their wings.

Two humans, named Kuat and Iae, were both tired of the birds taking all the sunlight for themselves. They hatched a plan, in which they decided to trap the king of the birds—Urubutsin. They both hid inside a dead animal’s corpse, and waited for Urubutsin to land. When he landed, Kuat leaped out of the corpse and caught Urubutsin by his leg. Kuat demanded the king to share some of the sunlight with the rest of the world. Unable to flee, Urubutsin was forced to agree.

Like the Inuit myth, this one also has another version. In this version, the bids are vultures and Urubutsin is given a carcass filled with maggots as a gift. 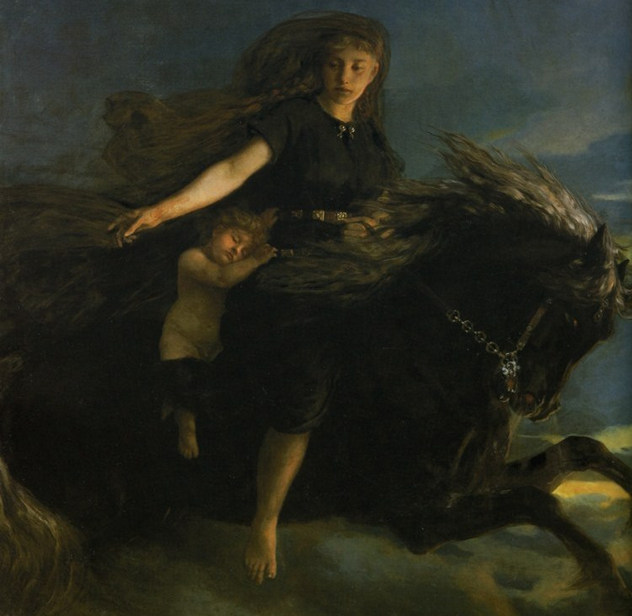 The gods found out about Nott and her children, so they put them all to good use in their creation of the universe. Nott and Dagr were given chariots and horses to travel around the Earth. The gods also decided to give them a specific set of hours to circle the Earth—12 hours each. Nott’s main horse, Hrimfaxi, drops water from his mane wherever Nott leads him, creating morning dew. Meanwhile, Dagr provides brightness with his bright, golden hair. 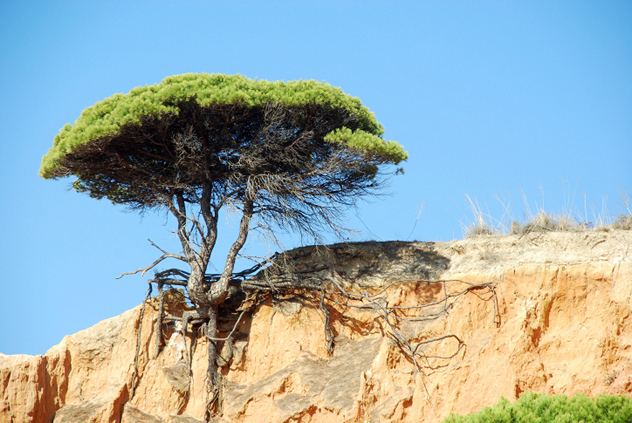 In the Sky World, there was a pregnant woman and her brother. She was very curious about the Tree of Life, which covered the entrance to the world below. No one was allowed to tamper with it. One day, the woman persuaded her brother to move the tree. The entrance was uncovered, and the woman curiously peeked out of it. Being a clumsy being, she fell, but attempted to save herself by grasping at the root of the tree. She failed, however, and grasped some dirt, which fell with her.

They were nurtured by their grandmother, Sky Woman, who died shortly after they grew up. The twins then fought over her body, and eventually tore it apart. Sky Woman’s head was thrown into the sky and became the Moon. Left-Handed Twin and Right-Handed Twin knew that there was no chance they would come to an agreement on anything. Therefore, they decided to dwell in different realms. Right-Handed Twin would dwell on Earth first, creating the day. Afterwards, Left-Handed Twin would dwell on Earth, creating the night, where evil roams more freely. 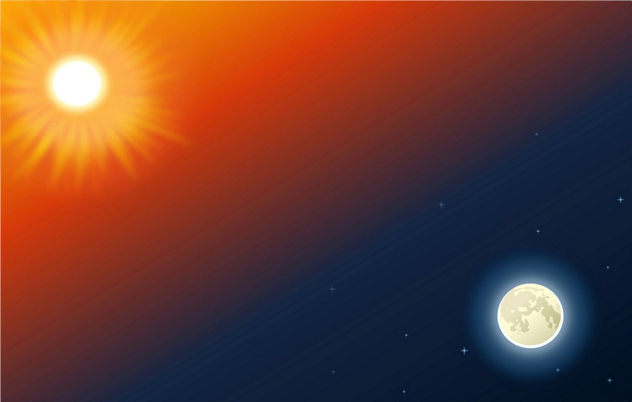 The Filipinos had a very interesting myth about day and night. After the Spanish conquest of the Philippine Islands, the native religion had faded from memory.

In Filipino mythology, there were two gods: Apolaki, who ruled over the Sun, and his sister Mayari, who ruled over the Moon. Their father, Bathala, ruled over the entire world from the heavens, following his battle with Ulilang Kaluluwa. Sadly, Bathala’s reign ended with his death, and a power struggle between Apolaki and Mayari began. Apolaki wanted to become the sole ruler of the heavens and the world, while Mayari had other plans: She sought to share the reign with Apolaki.

In one battle, Apolaki took out one of his sister’s eyes. After the battle, Apolaki began to contemplate his actions, eventually beginning to regret them. To show his regret, Apolaki agreed to share the heavens and the world with Mayari. First, Apolaki would rule with the Sun; then, Mayari would rule. Yet due to her loss of an eye, when she reigns over the heavens and the Earth, her power wanes, making the Moon dim.

I’m just a normal guy with normal dreams with a normal life.