Executioner. That one word is enough to strike fear in the hearts of even the most hardened of convicts. Although those on the receiving end of capital punishment usually get the bigger share of public attention, the men and women behind the gallows deserve just as much scrutiny. Without further delay, let’s get to know the stories of some of the most intriguing executioners in history, those whose lives are sometimes more interesting than the ones they took. 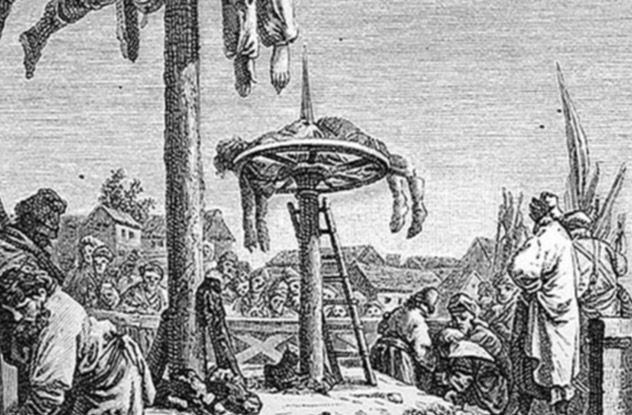 Louis Congo, a freed black man, became Louisiana’s official executioner in 1725 and served in that capacity for a dozen years. As the only one in the colony officially sanctioned to conduct executions and torture, Congo delivered punishments such as hanging, chopping off body parts, whipping, and the breaking wheel. In one case, he broke eight slaves on the wheel; in another, he whipped a Frenchman who was accused of assaulting a man with a knife. The color of the condemned did not matter to Congo—he administered punishment to white, brown, and black men with equal intensity.

You might think being the sole executioner granted Congo a prestigious role in Louisiana society. Actually, he was pretty much a pariah, as the French considered the job to be lowly and insulting. Being ostracized, Congo had to live at the outskirts of town, which made him very vulnerable. In fact, Congo endured being assaulted twice in his home by slaves angry at his involvement with the colonial authorities.

Sneaking a Camera into Mecca to Film Hajj: The World’s Largest Pilgrimage with Suroosh Alvi

Ever had days when you feel like quitting your job? Then you should probably listen to Hajj Abd Al-Nabi and let his love for his position as Egypt’s official executioner rub off on you.

As a young child, Hajj was a self-described “little Satan,” often strangling cats and dogs as a hobby. His parents told him such tendencies could send him to hell, but that penchant for killing served him well when he sought the office of executioner. His new bosses just had one special request for him: Grow a mustache. Hajj complied at first, but he soon found that “executing comes from the heart, not the mustache”—and luckily for him, he had a heart of stone.

Hajj says he has personally conducted 800 executions. He loves his job so much that years from now he would leave retirement in a heartbeat for duty if the occasion called for it. 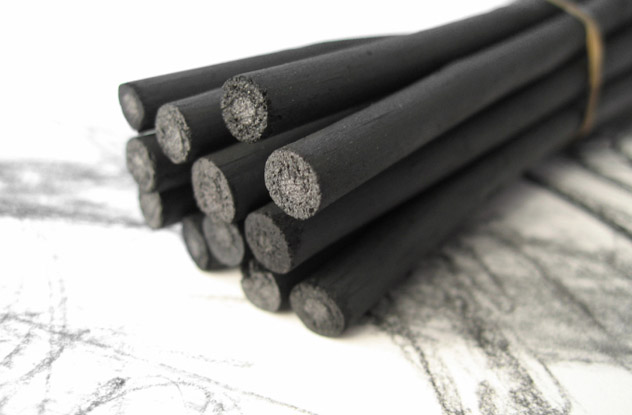 In the idyllic Irish town of Roscommon in the late 1700s, folk tales say there lived a woman named Lady Betty. As the story goes, Lady Betty was a single mother whose son left for the US for his education. Years later, her son—now well-dressed and successful—came to pay her a visit. Lady Betty, unable to recognize her son, invited him in but stabbed him as he slept to steal his belongings.

After she realized that she killed her own son, Lady Betty went ballistic and was later sentenced by authorities to death. On the day that she and several others were to be executed, the hangman didn’t show up. Sensing her opportunity, Lady Betty came up with a proposition. If the sheriff commuted her death sentence, she’d hang the other criminals for free.

The sheriff agreed, and for three decades, Lady Betty performed her job with murderous glee. She was said to let the hanged bodies swing like pendulums while she drew them with charcoal. When she died, people found her room filled with hundreds of sketches of people she’d hanged. 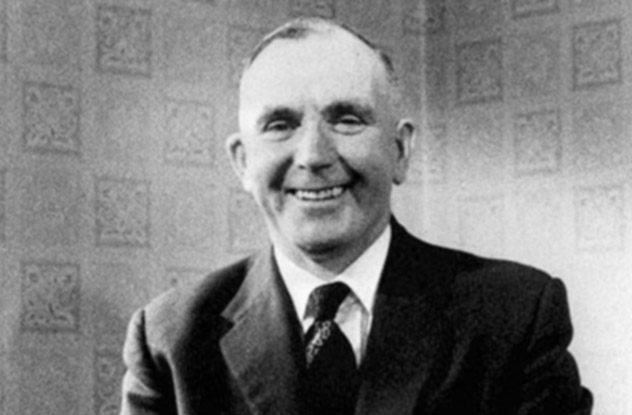 It wasn’t hard for Albert Pierrepoint to be so good at his job; after all, the Englishman did come from a family of executioners. However, Albert outdid them all due to his extraordinary proficiency in the profession. His victims ranged from garden variety convicts to Nazi war criminals. He claimed to have personally executed at least 400 (and perhaps 600) people in a career that started in 1932 and spanned more than two decades.

In his prime, Pierrepoint could reportedly execute 17 people in a single day. But after he resigned in 1956 over a fee dispute, he switched gears completely. He actually began campaigning against the death penalty. News of his resignation spurred the Home Office to contact and persuade him to reconsider. They didn’t just want him to drop his protests—they wanted him back on the job, because he truly was England’s finest ever hangman. 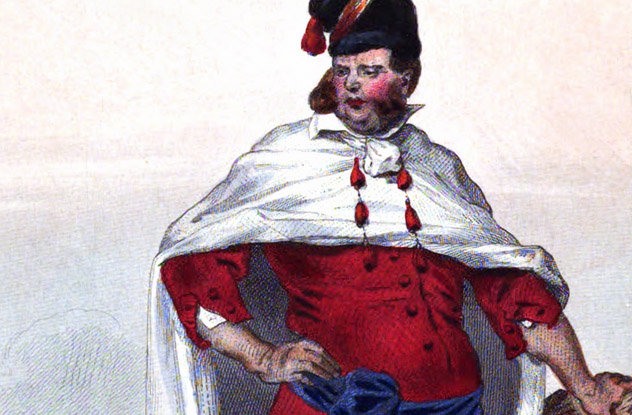 Arguably the only family more proficient at executions than the Pierrepoints were the Sansons, who for more than 150 years were in charge of administering capital punishment in France. The most well-known family member, Charles-Henri, executed 3,000 victims during the reign of King Louis XVI and through the French Revolution.

With the invention of the guillotine, Sanson was able to decapitate scores of victims daily. But far from being a cold-hearted killer, Sanson actually expressed remorse for the thousands of lives he took. His most traumatic experience was executing the king. He had hoped that the execution would never have to be carried out, that some supporters of the monarchy would stage a rescue. No such plan ever transpired, and Sanson had to follow through.

Worsening health forced Sanson to finally resign and give up the post to his son Henry, who would later achieve his own fame by executing Marie Antoinette. 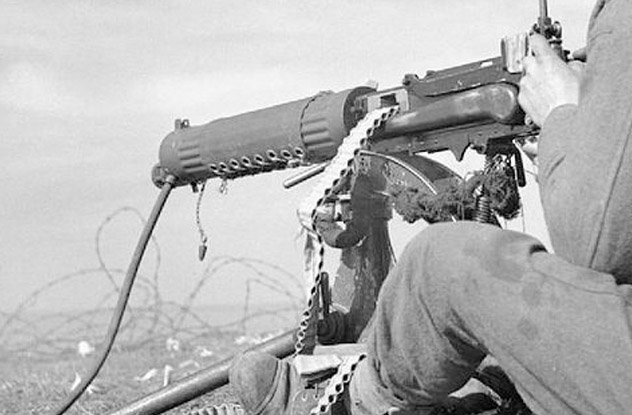 During World War II, Antonina Makarova turned from a Soviet volunteer nurse to an executioner for the Nazis. With the Germans’ rapid advance into Soviet territory, Makarova found herself deep behind enemy lines and was captured by the SS. She ended up as the official executioner for the Nazis in Lokot, a puppet state established in Central Russia that lasted for a year.

She executed some 1,500 people via machine gun, earning her the moniker “Antonina the Machine Gunner.” After the war, she married a veteran and settled in Belarus. She was later apprehended by KGB agents who managed to finally track her down in 1976. Though she initially denied the charges, Makarova broke down in the end and admitted to the killings.

Hoping for a mitigated punishment, Makarova divulged everything and even showed investigators the execution sites. The court had little sympathy. Two years after her capture, instead of being a part of a firing squad, the woman found herself in front of one. 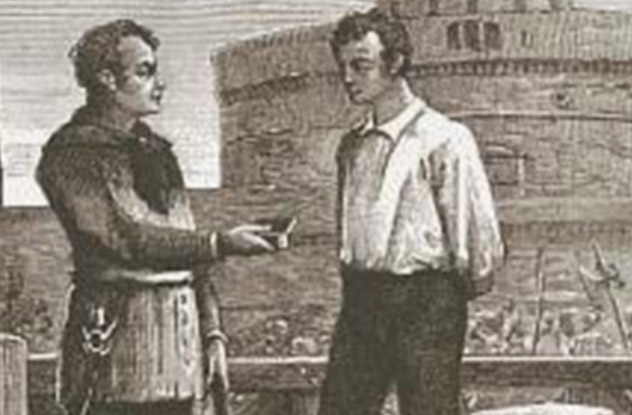 During his almost 70-year stint (1796–1864) as the Papal States’ executioner, Giovanni Bugatti was treated like a rock star. Known as “Mastro Titta” (dog Latin for “Master of Justice”), Bugatti conducted 516 executions and was known to be very professional about it. Sometimes he even gave snuff to the condemned in a last show of empathy.

Bugatti’s executions often attracted large crowds of whole families. His initial methods involved hanging and decapitation by axe. For the condemned who committed particularly gruesome crimes, Bugatti employed either quartering or mazzatello, a very brutal method wherein the condemned’s head would be smashed with a mallet and his throat cut shortly afterwards.

The guillotine eventually became Bugatti’s favorite method of execution after the French introduced it in 1808. He used it on more than 50 occasions. He finally retired at the ripe old age of 85 and was rewarded by the Pope with a lifetime pension for his dedicated service. 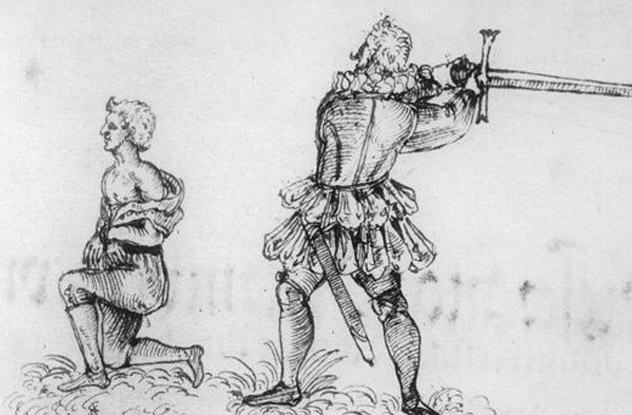 As Nuremberg’s official executioner from 1578 to 1618, Franz Schmidt executed almost 400 people and tortured hundreds. However, he was far from the archetypal portrayal of a brutish killer. Schmidt’s memoirs depicted a very sober man who carried out his job against his will.

The Schmidt family first came into the business after a noble forced Franz’s father (a woodsman by trade) to become the town’s executioner. The mantle was soon handed to Franz, who took it because he had no options at the time. While the pay should have made him upper class, Schmidt’s profession left his family shunned by society. Despite this, Schmidt did attain a high degree of class throughout his life, which included being a healer on the side.

He finally achieved recognition for his work when the emperor made him a citizen of Nuremberg, restoring to him the honor that the area normally denied to executioners. 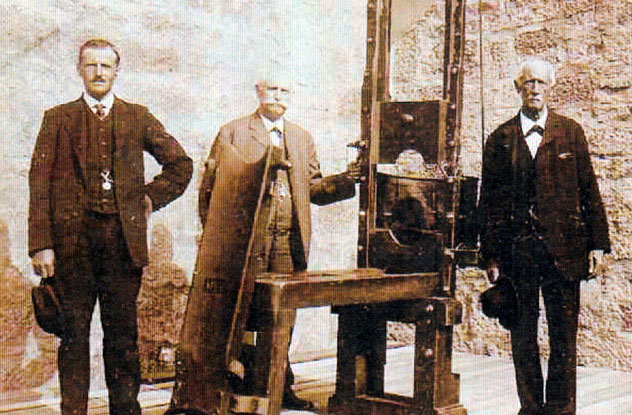 With a family pedigree boasting eight generations of executioners, Johann Reichhart’s place in history was virtually ordained from the start. In a career spanning three employers and two World Wars, the German-born Reichhart executed more than 3,000 people.

His first executions occurred in Bavaria in 1924 under the Weimar Republic; his job earned him many enemies, and he had to hightail it to Holland in 1929. He eventually returned after the Nazis reinstated him to his former post in the 1930s. It was during their rule that Reichhart carried out the vast majority of his executions: a whopping 2,876. He and his team used a miniature version of the guillotine called “Fallbeil,” which allowed them to set and conduct the executions at a rapid pace.

After the Allies arrived, he began working for them, hanging more than 20 convicted war criminals at Landsberg in 1946. Due to his being a member of the Nazi party, Reichhart was later arrested and punished with severe fines. Subsequently, he separated from his wife and had to endure the suicide of one of his sons. Reichhart lived the remainder of his life in a nursing home, where he died in relative obscurity in 1972. 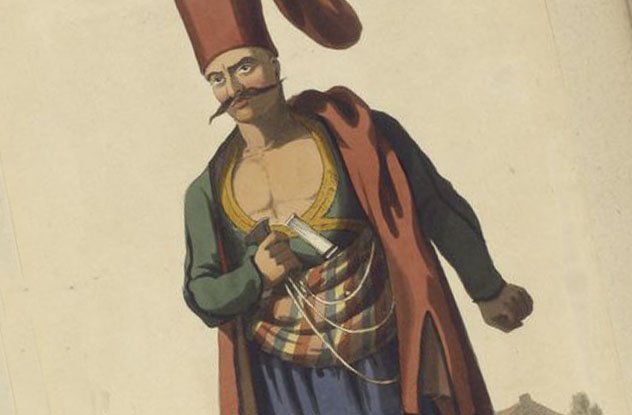 The Bostanji gardeners played an important role in Ottoman society. Besides being tasked to care for the sultan’s grounds, it was also their job to execute the condemned. The head of this group, the Chief Royal Gardener, was in charge of informing and executing nobles.

The chief sometimes let a very high-ranking official (especially a grand vizier) save the prisoner’s life by challenging him to a race inside the palace grounds. If the condemned reached the finish line first, he would be spared; otherwise, it was death.

Of all the chiefs, one of the most famous was Souflikar. During the reign of Mehmed IV in the 17th century, he conducted more than 5,000 executions in just five years. His method was as brutal as it was efficient—instead of using equipment, Souflikar preferred to strangle his victims with nothing but his bare hands. 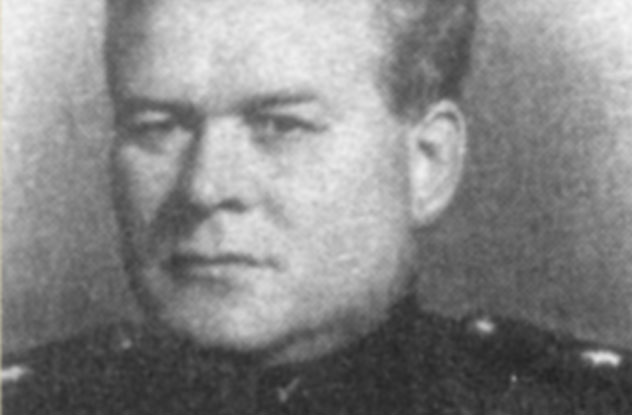 Although we already mentioned him in a previous list, how can we not include Vasili Blokhin here? Known as history’s most prolific executioner, the Soviet Major-General personally shot and killed more than 10,000 people during Stalin’s purges and the Second World War.

As with any serious professional, Blokhin used his own set of German pistols, which didn’t break down as often as the Soviet standard handgun. Blokhin could perform as many as 300 executions in a single session at the height of his career.

Stalin duly rewarded him for his meritorious service. But after the dictator’s death in 1953, his successor Khruschev—in one of his rare moments of sobriety—revoked all of Blokhin’s awards and privileges. Shamed by this, Blokhin reportedly ended his life by hanging himself inside his house.