Benjamin Franklin once mused that one of life’s only certainties was death. Across the Atlantic from him, on the British Isles, is a rich tapestry of history within which many unusual and gruesome deaths feature. Here is a list of some of the more peculiar and grisly ways that British historical figures met their maker. 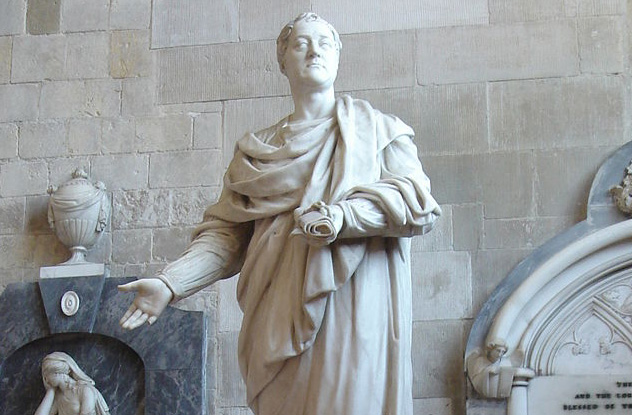 William Huskisson was an influential 19th-century British politician, a pioneer of free trade, a liberal reformer—and the first man to be killed by a train.

This sticky end to a successful career was not the first calamity to which the accident-prone member of parliament had fallen victim. He had previously been flattened by a pole in London, fallen on by a horse just before his marriage, and severely injured his legs trying to jump over a moat in Scotland. However, the morning of September 15, 1830, would prove to be Huskisson’s final accident.

When the train that Huskisson was on came to a stop, he alighted to reconcile with his old colleague, the Duke of Wellington, who was in a different carriage. Meanwhile, George Stephenson’s famous Rocket locomotive approached at speed on the adjacent track. In the confusion, Huskisson panicked and ended up falling beneath the wheels of the Rocket, which ran right over him, crushing and mangling his legs. Several hours later, Huskisson died of the horrific wounds he had incurred.

Ironically, there had been considerable opposition in parliament to the building of the rail track on which Huskisson died. Believing trains were the future, Huskisson had strongly advocated the track’s development. Had he not, he may have not met such an untimely and gruesome end. 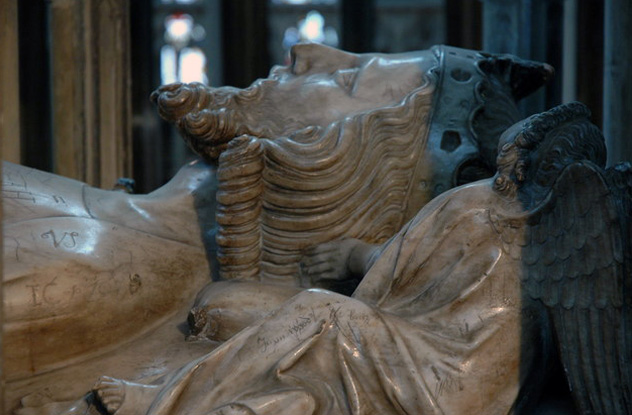 Edward II, king of England from 1307–1327, was a rather unsuccessful ruler. The son of the crusading, warlike, and conquering Edward I, Edward II proved more effeminate and was believed by many at the time (and since) to have been gay. Whether his close relationship with nobleman Pier Gaveston was anything more than a simple friendship, we cannot be sure. However, Edward’s aptitude for alienating his supporters led to his own wife, Isabella, joining forces with Edward’s enemies and revolting against him.

Once deposed, Edward appeared too dangerous to be kept alive, so he was murdered at Berkley Castle on September 21, 1327. His murder, according to some chroniclers, involved having a red-hot poker inserted up his anus and into his body, with his screams being heard for miles around the castle. It was a humiliating and grisly end for anyone, let alone a king of England.

8William The Conqueror
Impaled On Saddle, Followed By Exploding At His Funeral 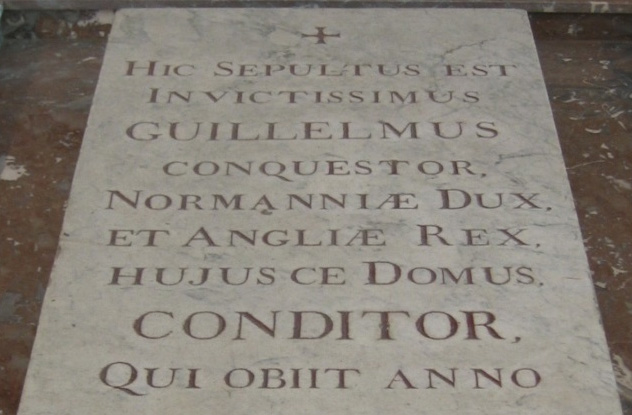 Although William the Conqueror was technically born in Normandy, France, his status as king of England means he makes our list of famous Brits.

Best known for his conquering of England in 1066, William became rather overweight in his later years. When riding a horse, his stomach protruded over the saddle. In July 1087, his horse reared, and he was thrown onto the pommel, rupturing his internal organs. He died of his injuries several agonizing months later.

His funeral would prove even more undignified. When his body was being lowered into its coffin, he was too large to fit. As priests tried desperately to stuff the bloated corpse into the coffin, the abdomen exploded, and a disgusting smell filled the entire room. Subsequently, the ceremony was a rushed affair—an undignified and grim end for one of history’s greatest conquering kings. 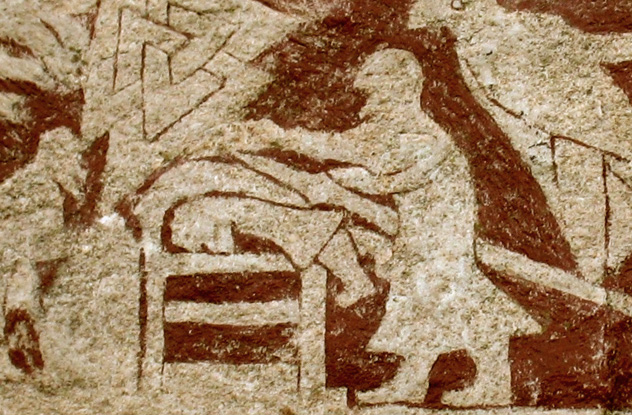 King Aella was ruler of the Anglo-Saxon Northumbrian Kingdom of England in the ninth century. Although we know very little about Aella because of the lack of credible sources from the time, one well-known (if semi-legendary) bit of trivia is the bloody and gruesome death he suffered at the hands of Viking invaders.

At the time, Anglo-Saxon England was being devastated by highly mobile and ferocious Viking armies. York, Aella’s seat of power and the capital of Northumbria, was burned to the ground by Vikings in 867, and the defeated Aella was subjected to the Blood Eagle ritual. The description of this ordeal has become more graphic and lurid over time and with each account.

Earlier accounts describe the act as carving a picture of an eagle into the victim’s back. Later accounts are far more horrific. Aella would have been tied up and offered to the Norse god Oden. He then had his back cut open and his ribs and lungs pulled out and spread like the wings of an eagle. This torturous death served as a warning to the other Saxon Kingdoms—Mercia, East Anglia, and Wessex—all of which would soon face the wrath of further Viking invaders. 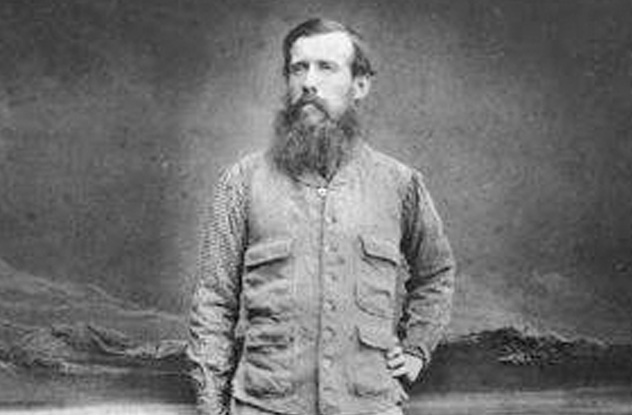 John Hanning Speke was a British Army officer and then a famous African explorer. He also accidentally shot himself in the chest with a shotgun while he was climbing over a wall in Wiltshire, England, on September 15, 1864.

Speke is most well known for his search for the source of the Nile, his mapping of much of central Africa, and for being the first European to reach Lake Victoria. He greatly influenced later adventurers such as David Livingstone and Henry Stanley, who subsequently mapped much of the Nile and Congo rivers and their tributaries. However, rather than dying at the hands of natives, wild animals, or tropical disease, Speke blew a hole through his own body while casually climbing over a 60-centimeter (2 ft) wall when he was out shooting one afternoon back in England.

He quickly died from his injuries before a doctor could reach him, and his future plans for further exploration met a swift and brutal ending. 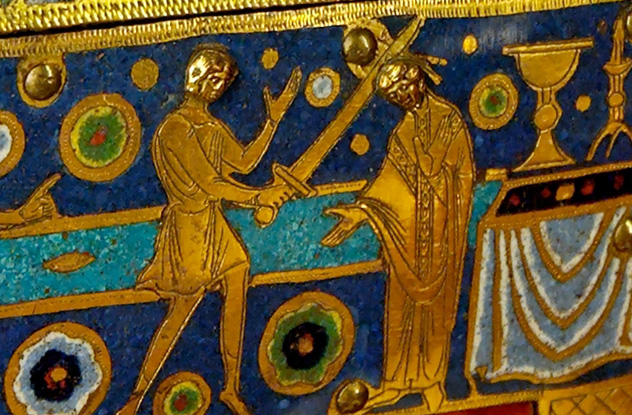 Thomas Becket rose from humble beginnings to become the most powerful clerical figure in England—the Archbishop of Canterbury. However, he became embroiled in a very public spat with King Henry II and subsequently met a bloody and shocking end.

Upon starting his tenure, Becket was very much the king’s man and had a close friendship with Henry, who had promoted Becket over more experienced churchmen. Relations soon turned sour when the two disagreed over Henry’s attempts to remove the church’s judicial powers. After returning from an initial exile, Becket continued to infuriate Henry to the point where the king supposedly exclaimed, “Will no one rid me of this turbulent priest?!” Four of Henry’s knights left immediately. On December 29, 1170, they reached Canterbury Cathedral.

Although the knights probably only initially meant to capture Becket, the Archbishop’s stolid resistance led one of the knights to cut the top of Becket’s skull from his head with the swing of a sword. After another blow, Becket still stood firm, but a third hack from one of the knights’ swords forced him to the floor. Becket’s brains seeped out, dying the ground.

As a final insult, the knight’s clerk stood on the back of Becket’s neck and further scattered the Archbishop’s bloody brains across the cathedral floor. The knights fled, and Europe was shocked that a clergy leader could suffer such a sacrilegious death in the most important religious building in England.

Becket became a martyr. He was canonized by the Pope, and the spot where he fell became a pilgrimage point for followers. Henry would fast and wear a sackcloth in penitence for the guilt he felt over his old friend’s death. Over 300 years later, during the English Reformation and split from the Catholic Church, Henry VIII desecrated Becket’s remains showing that—even in death—Becket was still a threat to royal power.

4Lord Castlereagh
Suicide By Cutting Of The Throat 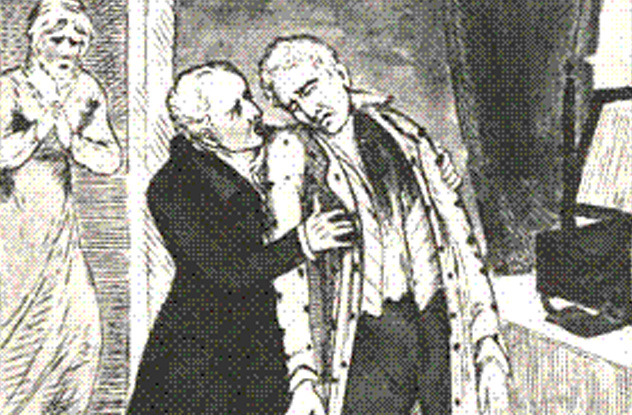 Lord Castlereagh, an influential British statesman, met a grisly end by his own hands. As foreign secretary from 1812, he was influential in the defeat of Napoleon and was the principal British representative at the subsequent Congress of Vienna 1815, which reshaped the map of Europe for decades.

Despite his many achievements, Castlereagh was also a controversial figure, hated by many in Britain. His attempts at justifying the cavalry charge on British civilians at the Peterloo Massacre of 1819 led the famous romantic poet Lord Byron to write, “I met Murder on the way—He had a mask like Castlereagh.” Public criticism and the heavy workload of the Foreign Office led Castlereagh into a downward spiral of paranoid nervous depression.

On August 12, 1822, he cut his own throat with a penknife, gasping at his doctor, “I have done for myself . . . I have opened my neck.” Lord Byron’s reaction upon hearing the news was cold: “So he has cut his throat at last!” The epitaph he later wrote was colder still:

“Posterity will ne’er survey
A nobler grave than this:
Here lie the bones of Castlereagh:
Stop, traveller, and piss.” 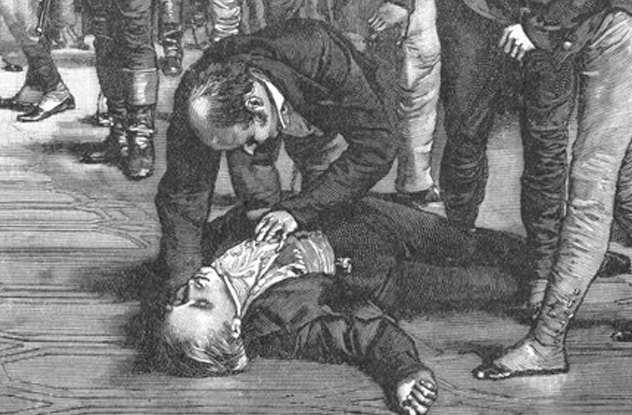 Spencer Perceval is the only British prime minister to have been assassinated while in office. The Tory aristocrat had rapidly risen to the highest office of power in British politics. He was a respectable and decent man who supported the abolition of the slave trade.

On May 11, 1812, while walking through the lobby into the House of Commons, he was shot with a pistol at point-blank range in the chest. Perceval fell to floor, exclaiming, “I am murdered!” His assassin, John Bellingham, walked casually over to the fireplace, making no attempt to escape.

Perceval was carried into a side room, where he died shortly afterward. Bellingham was seized and later hanged for the assassination. He claimed to have carried out the act because of a compensation grievance with the government. After concealing a pistol in a specially made pocket of his jacket, he took his revenge on the head of the government he blamed, leaving Perceval’s wife a widow and his 12 children orphans.

2Thomas Urquhart
Laughed Himself To Death 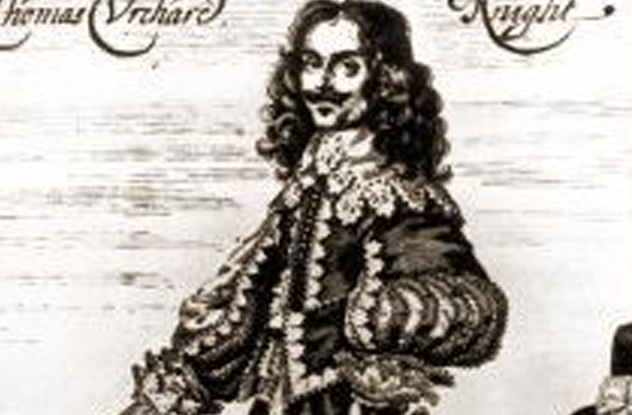 Sir Thomas Urquhart was an eccentric Scottish writer famous for his adventurous lifestyle and bizarre, stylistic publications. During the English Civil War, he fought on the Royalist side, first for King Charles I and then later for King Charles II at the Battle of Worcester in 1651. When Charles was defeated, Urquhart was captured by Oliver Cromwell’s forces and imprisoned firstly in the Tower of London and later at Windsor Castle—one of the current residences of Queen Elizabeth II. It was during Urquhart’s containment that he wrote some of his most famous works and also found the time to chart his own descent from Adam and Eve.

When he was eventually released, he traveled to Europe and continued to write, working on his own concept of a universal language. But Urquhart’s death is more unusual than gruesome. In 1660, upon hearing of the restoration of Charles II to the throne, Urquhart supposedly died in an inordinate fit of “excessive laughter.” All men die eventually, and Thomas Urquhart met his end in a manner very fitting of his eccentricity. 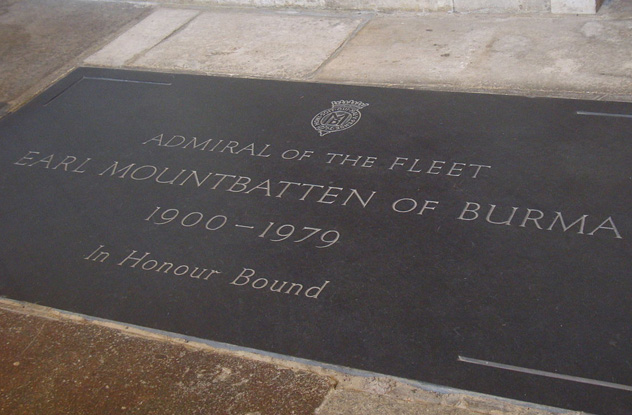 Lord Mountbatten, a cousin to Queen Elizabeth II and former Viceroy of India, was a powerful British statesman and naval officer. On August 27, 1979, he was assassinated by the IRA (Provisional Irish Republican Army) while on his fishing boat, Shadow V.

IRA members had planted a radio-controlled bomb aboard the night before and waited for Mountbatten and his companions to set sail before detonating the device and blowing the boat “to smithereens.” All seven people aboard were thrown into the sea by the blast. Mountbatten was pulled from the water by fishermen, but his legs had been almost completely severed by the blast. He died shortly afterward.

Oli Foster is a British history postgraduate with a love of music, travel, and milkshakes.