When the Spanish arrived in Peru, they discovered the greatest Native American empire in history, stretching from the mountains of Ecuador to the deserts of Chile and the jungles of Brazil. But, alone among history’s great empires, the Inca had no written language. Instead, they administered the empire using bundles of knotted cords known as quipus. Long dismissed as mere mnemonic aids, it’s now becoming clear that the “talking knots” were a far stranger and more advanced technology than we ever suspected. 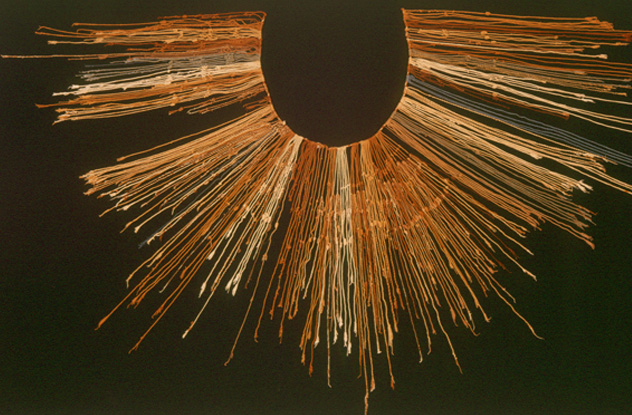 The Spanish recognized that the quipu were more formidable and accurate than their own system of record-keeping. They also realized that they were extremely important to the prestige and history of the local people. They didn’t care for either fact and declared quipu satanic in 1583, burning every example they could find. At the time, quipu were extremely common, with every village in the empire using them. Today, only around 750 examples remain.

Despite their virtual eradication, many Andean people retained an enormous respect for quipu, although they lost the ability to truly read them over time. In the Peruvian village of San Cristobal de Rapaz, the locals carefully preserve a quipu in a ceremonial “quipu house” that must be approached with offerings and invocations. They regard the ancient record as a holy object that allows them to communicate with the nearby mountains, which allow the rain to come in their time of need. 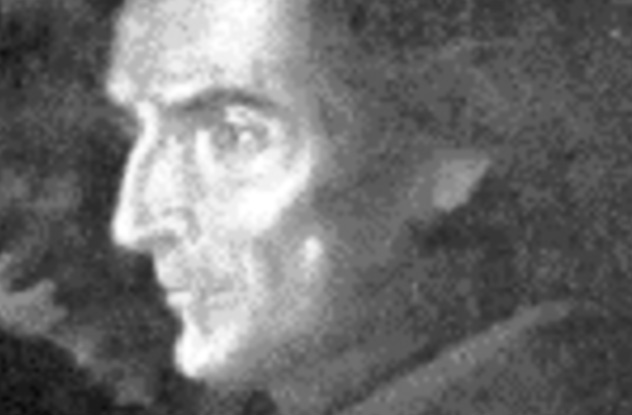 Until recently, Western historians dismissed the quipu as numerical records, barely more advanced than abacuses. But early Spanish chroniclers frequently referred to the quipu as containing words as well.

The Jesuit missionary Jose de Acosta specifically recorded that the native Peruvians considered the quipu “authentic writing,” adding that “I saw a bundle of these strings on which a woman had brought a written confession of her whole life and used it to confess just as I would have done with words written on paper.” Others came across an old man who treasured a quipu recording “all [the Spanish] had done, both the good and the bad.” (Naturally, they seized and burned it.)

It took an unusual combination to overturn the consensus. Robert and Marcia Ascher were a married couple who also happened to be an archaeologist and a distinguished mathematician. In the 1980s, they teamed up to analyze the quipu and confirmed that at least a fifth of them had “non-arithmetical” elements.

This was huge, because if quipus are hiding a writing system, then it’s one like no other in the history of the world. For one thing, it’s three-dimensional. For another, the quipus don’t seem to represent sounds, so the Inca developed a notation system entirely separate from their spoken language, perhaps like computer binary (more on that later).

But before all of that, let’s get down to basics. How did the quipu work?

8They Used A Base-10 System 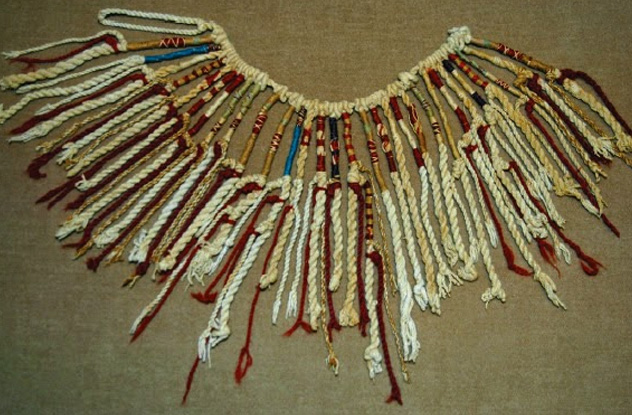 The most straightforward use of the quipu was to record numbers using clusters of knots. These are relatively easy to decipher, since the Inca used a base-10 positional number system much like the one we use today. 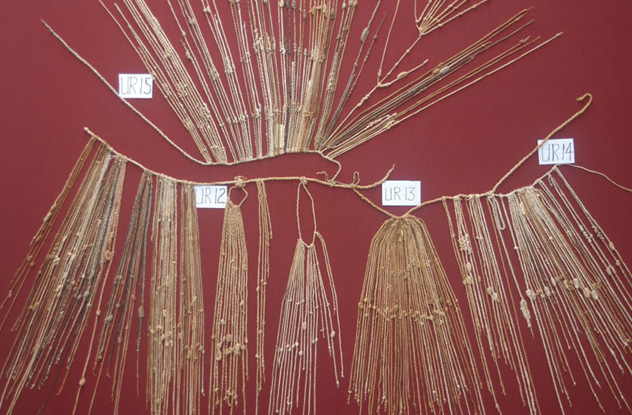 All cultures have the concept of nothing, but the actual use of zero as a number was one of the most important breakthroughs in mathematics. The concept was considered so startling that in 1299, the Italian city of Florence banned Hindu-Arabic numerals such as zero entirely.

Most importantly, zero is used as a placeholder number. For example, in the number 2099, the zero indicates that there is a “hundreds” column, but that it has no value. Without zero, writing the number 2099 would require all sorts of convoluted symbols. We couldn’t write the number 20 at all, except by giving it a symbol of its own or writing “19 plus 1.”

Inca math was advanced enough to include placeholder zero, which they represented as a space with no knots. So 209 would be indicated by two knots, followed by a space (0), followed by a clump of nine knots. This meant that the knots had to be exactly spaced so that it was easy to see when a space stood for zero.

6They Had Multiple Levels 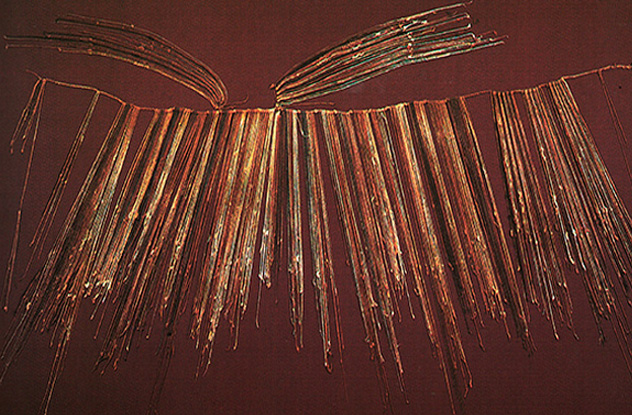 In fact, the knots in a quipu were so perfectly spaced that the half-Inca chronicler Garcilaso de la Vega made them sound something like a spreadsheet: “According to their position, the knots signified units, tens, hundreds, thousands, ten thousands and, exceptionally, hundred thousands, and they were all as well aligned on their different cords as the figures that an accountant sets down, column by column, in his ledger.”

Color also helped to give the quipu meaning. According to the half-Inca Garcilaso de la Vega in 1609, quipu knots were “tied in several cords of different thicknesses and colors, each one of which had a special significance. Thus, gold was represented by a gold cord, silver by a white one, and fighting men by a red cord.”

Space was also used, with groups of cords representing a particular location or category. In the image above, you can clearly see that the pendant cords are separated into groups with spaces in between them. If the Inca wanted to know how many weapons their army had, then each group of cords might represent a regiment, with a different color of cord for every type of weapon.

Or let’s say the Inca wanted to know how many animals had been born in a village that year. Each group of cords would represent the animals owned by one particular family. Red cords would represent llamas, green cords alpacas, and brown cords guinea pigs. The knots on each cord would be the number of animals born that year. If there was no red cord in a group, it would mean that family didn’t own llamas. If there was a red cord, but it had no knots, it would mean the family had llamas, but they didn’t give birth that year.

4They Did Contain Words 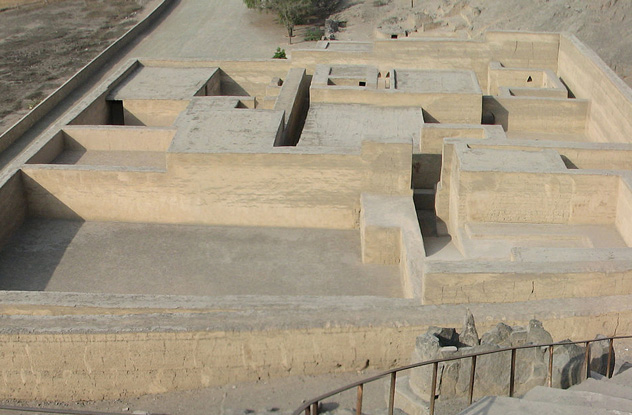 As well as colors and space, the Inca used at least three different types of knots to encode data. A figure eight knot was used to indicate that it was the last digit in a number, a bit like a numerical full stop. In the 1950s, a treasure trove of preserved quipus was found at an Inca administrative center called Puruchuco. Some of the quipus clearly summarize the numbers found on other, larger quipus. It’s likely that these summary quipus were intended as reports to be sent to the Inca capital at Cuzco.

Interestingly, the summary quipus always start with a single cord containing three figure eight knots. Since figure eight knots indicate the last digit, three figure eights in a row don’t make sense as a number. Quipu researchers like Gary Urton now believe that the three knots represent the place name “Puruchuco.” This is the first non-numerical information decoded from quipus. It is likely that other such “zip codes” exist for locations throughout the empire, but they are likely less easy to detect than Puruchuco’s clearly non-numeric figure eight knots. 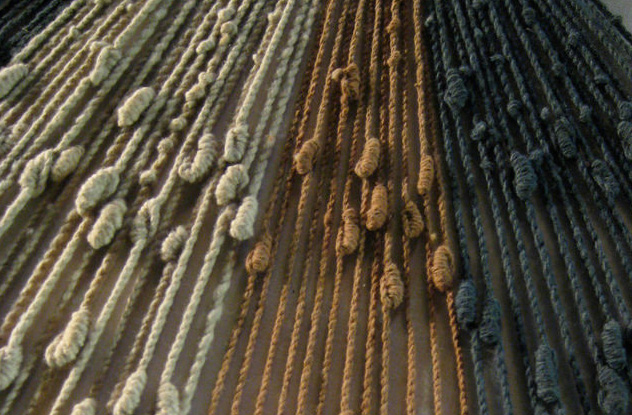 Quipus had other elements that probably helped give them meaning. Garcilaso de la Vega specifically mentions the thickness of the cords, but we don’t know exactly what that meant. Additionally, researchers have focused on the material used (cotton or wool) and the style of weaving the cords (two distinct patterns known as S-spun and Z-spun). These might be meaningless, but the distribution of S-spun and Z-spun cords does seem unusual enough that it might not be random.

Gary Urton, a leading quipu researcher, has suggested that the Inca used a binary code similar to modern computer binary. According to Urton, each quipu represents a series of seven binary choices (for example, cotton vs wool and S-spun thread vs Z-spun thread). Combined with color, Urton argues that this allows quipus to indicate up to 1,500 distinct arrays—-far more than Egyptian hieroglyphs—-and therefore contain lengthy narratives, much in the same way that computers can encode whole books in a series of zeroes and ones.

Urton is at pains to emphasize that the binary code is just a theory and it hasn’t gained wide acceptance among his peers. Notably, it’s not clear how the binary code reconciles with the decimal numbers we know are definitely recorded by the quipus. 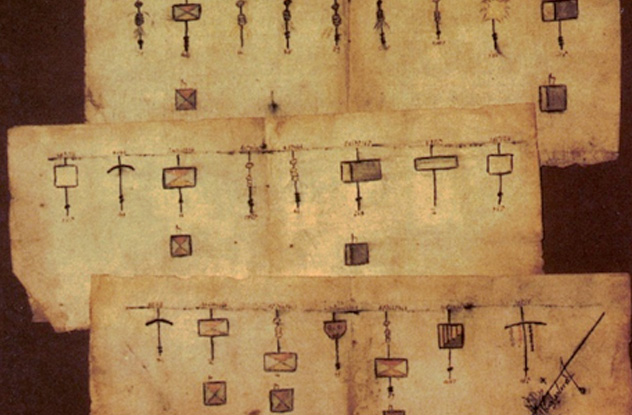 In 1996, an Italian historian named Clara Miccinelli claimed to have made an amazing discovery in the archives of her noble Neapolitan ancestors. A book written by 17th century Jesuits made several startling revelations about the conquest of Peru. Among other things, the book claimed that several “royal quipus” were actually written in a forgotten syllabic language.

According to the book, each thread on a royal quipu began with a knot or symbol indicating a particular deity. The thread then contained a number indicating a syllable in the god’s name. It specifically cites the god Pachacamac, saying that his symbol followed by one knot is the syllable “pa,” while two knots is the syllable “cha” and three knots would be “ca.” In this way, it would have been possible to write a short story or song across a full quipu.

Unfortunately, most mainstream historians suspect that the book is a forgery, since it makes several outlandish claims, including that Francisco Pizarro conquered the Inca via some nefariously poisoned wine. It also uses the term “genocide” to describe the conquest, even though that word wasn’t invented until several hundred years later. Clara Miccinelli, who was known for somewhat eccentric scholarly interests, has largely refused to release her documents for careful study and testing, leaving the royal quipu theory unsubstantiated.

1They’re Completely Alien To Us 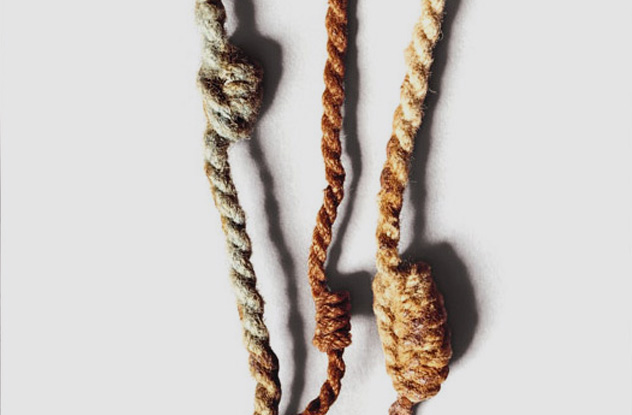 In days gone by, historians used to refer to the “paradox” that the Inca alone managed to build a giant empire without any form of writing to administer it. But it’s now clear that the quipu were more than up to the task. Whatever else they were, the quipu were a terrifyingly complex apparatus: pendant threads, top threads, subsidiary threads, knot styles, weaving style, cord thickness, color, spaces, and unknowable other factors combined to create a strange nexus of information which we may not even have the tools to understand.

The Inca were an empire built on textiles and the quipu were arguably their finest work. We know from the Puruchuco quipu that they contained at least a few words. But even if that was as far as it went, they were still incredible devices, allowing for complicated arithmetic and a system of record keeping that rivaled any in the world.

In 2007, a Wired Magazine profile praised Gary Urton as the first to treat the quipu as “advanced, alien technology.” Urton himself recounted a key trip he made to work with traditional Bolivian weavers: “For an expert weaver, fabric is a record of many choices, a dance of twists, turns, and pulls that leads to the final product. They would have seen a fabric—-be it cloth or knotted strings—-a bit like a chess master views a game in progress. Yes, they see a pattern of pieces on a board, but they also have a feel for the moves that led there.”