Inside the world of extinct animals is a special club—species with dangerous looks. To get a meal or avoid becoming one, both predator and prey refined physical traits to interesting effect.

From fangs in whales to herbivores with a taste for meat and carnivores unlike anything seen today, ancient animals were survival specialists. Recent fossils also revealed unknown predators that terrified the prehistoric landscape and solved the mystery of a unique, if not gruesome, shark. 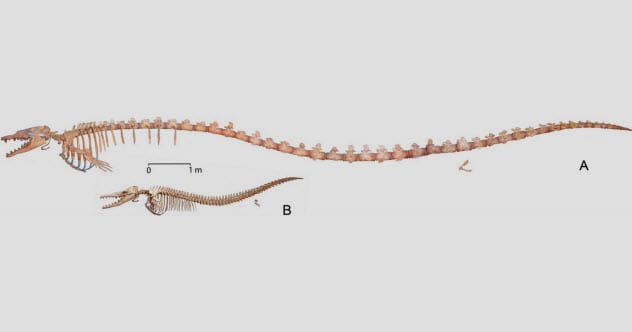 Egypt’s Wadi Al-Hitan (“Valley of the Whales”) is littered with the bones of extinct whales. In 2010, researchers stumbled upon a skeleton sticking through the sand. It was identified as Basilosaurus isis. This customer grew 15–18 meters (50–60 ft) long and lived 34 million to 38 million years ago.

Although it was a whale, B. isis did not snack on krill or plankton like its modern relatives. The creature was a ferocious predator that preyed on other whales. This specimen, in particular, provided the first clear evidence.

Inside the stomach curled the remains of a calf. The latter belonged to a smaller whale called Dorudon atrox, a species that matured at 5 meters (16 ft) long. Crush marks on the calf’s skull matched the adult whale’s teeth, proving it was a kill and not a dead body the larger animal had scavenged.[1]

Once again, the dental side of this ancient whale was far removed from any modern species. B. isis had fangs like a wolf and sharp teeth in the back of its mouth. 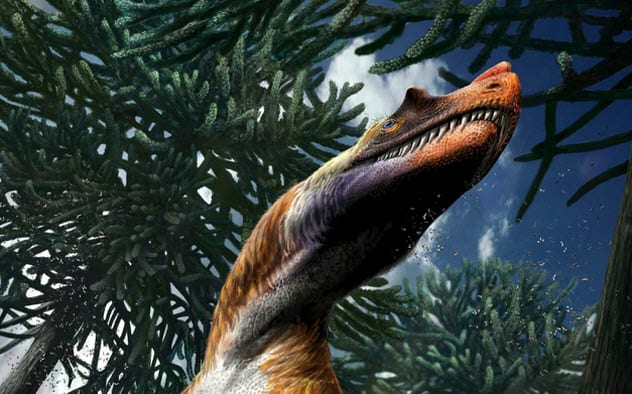 Near the Italian village of Saltrio, a quarry produced a special dinosaur in 1996. Years of dynamite blasts inside the quarry did the fossil no favors. In the end, 130 pieces were recovered. Saltriovenator zanellai took nearly 20 years to put together and identify as a new species.

Weighing about a ton, it was the Early Jurassic’s largest-known predator. Although not the biggest carnivorous dinosaur that ever lived, Saltriovenator was nevertheless formidable. It prowled on two legs and grew serrated teeth and deadly claws.

The time it lived—around 198 million years ago—was significant because this predated the existence of large meat eaters by a cool 25 million years. The beast, which grew to 7.6 meters (25 ft) long, died as a juvenile.

When it was 24 years old, the hunter somehow ended up on the seabed. The scars left by scavengers also made the fossil unique. Never before had any dinosaur remains been found that had been nibbled on by at least three distinct marine creatures—ancient sharks, urchins, and sea worms.[2] 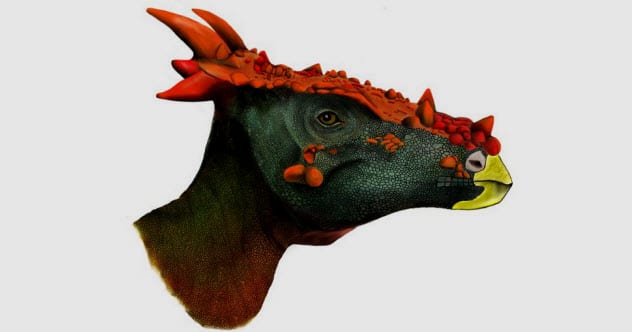 Pachycephalosaurus often appears in children’s dinosaur books. Illustrations show the dome-headed dinosaurs knocking their heads together in battle or grazing on plants. These animals were classified as vegetarians even though only partial jaws were found. Strangely, they were always the back part of the jaw, but they had classic herbivore teeth. Pachycephalosaurus undoubtedly enjoyed mashing fruit and rough plants.

In 2018 in Albuquerque, researchers gathered in confusion around the most complete skull ever found. For the first time, the juvenile contained a complete front jaw. It sported very different teeth. Serrated and sharp, the pointy blades reminded experts of carnivore teeth, especially those of T. rex. Notably, Pachycephalosaurus lived during the same time (66 million to 68 million years ago).

Further research might change their classification to opportunistic hunter and omnivore, but the discovery could also solve an enduring mystery. Very often, rocks from this period produce the teeth of small carnivores nobody can find. Pachycephalosaurus might very well be the source.[3] 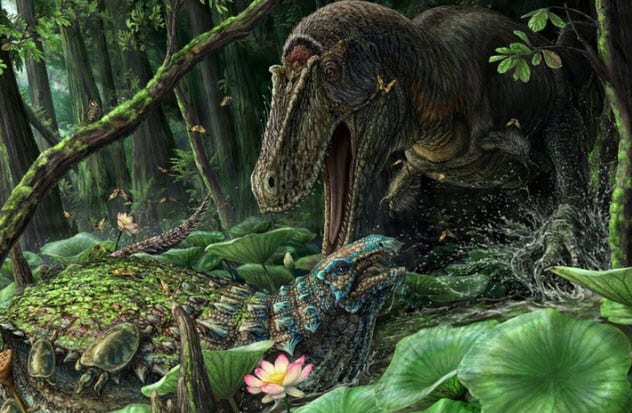 In 2012, an expedition uncovered bone fragments in New Mexico. Found in the Menefee Formation, the skeleton was badly weathered. For this reason, restoration dragged on for years. Once completed, the creature turned out to be an 80-million-year-old type of tyrannosaur.

It was a remarkable find. The new dinosaur predated the other 25 species of tyrannosaurs by millions of years. Dynamoterror dynastes was unusually large for such an early version of the lineage. It eventually became clear that the 9-meter-long (30 ft) carnivore belonged to the same subgroup that included large relatives such as T. rex, which lived around 15 million years later.

Dynamoterror is special for another reason. North America’s dinosaur evolution experienced a strange split around this time. A sea divided the continent, causing the same types of dinosaur to develop differently in the north and south. The new tyrannosaur’s differences from those of similar age could reveal more about these unusual evolutionary pockets.[4] 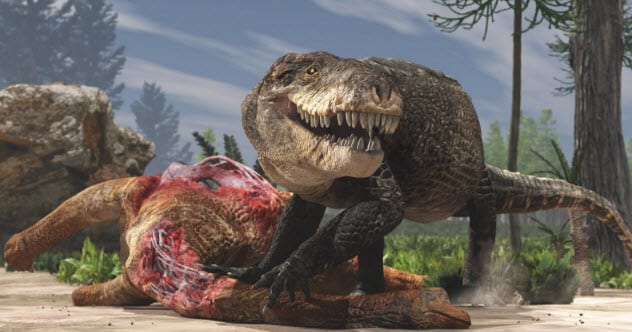 When a species is missing its early history, paleontologists call it a “ghost lineage.” The notosuchians are one such group. In 2017, a discovery not only suggested that they originated from southern Gondwana (the original supercontinent) but also presented a new notosuchian member.

Found in Madagascar, Razanandrongobe sakalavae resembled a crocodile. The head alone was 1 meter (3.3 ft) long. It had an unfriendly grin. Each tooth measured 15 centimeters (6 in) in length. In fact, they rather resembled those of T. rex, making the croc thing an apex predator of its time.

Researchers puzzled the species together using the new find and pieces rediscovered in museums. The combined data showed that R. sakalavae was perhaps the biggest notosuchian and definitely the oldest. It chased dinosaurs for dinner around 163 million years ago, a date that beat the previous oldest notosuchian by a mind-bending 42 million years.[5] 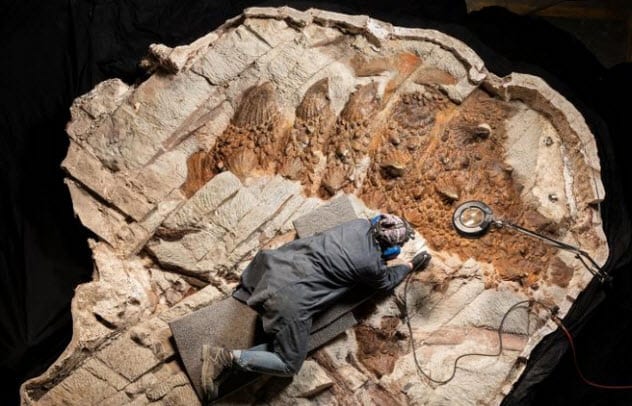 When a dinosaur died 76 million years ago, it was destined to be named after a monster in the Ghostbusters movie (1984). The fictional Zuul was a hellhound with a face like a gargoyle.

In 2014, the fossil reemerged in Montana. It was a previously unknown ankylosaurid—a dinosaur resembling an armored tank with a distinctive tail used like a club. The fossil was so well-preserved that its looks garnered the movie-inspired name Zuul crurivastator.

When it perished, Zuul was buried in river sand. This preserved even the soft tissue covering the armor and flank damage that suggested it argued with its own kind—which, in itself, was nothing to laugh at.

Although they were herbivores, this species came equipped with a tail that could smash the legs of T. rex. Tipped with a bony ball, the tail was adorned with spikes and measured 2 meters (7 ft) long. While its face was responsible for the “Zuul” part, the tail earned the rest of the creature’s name—crurivastator means “destroyer of shins.”[6] 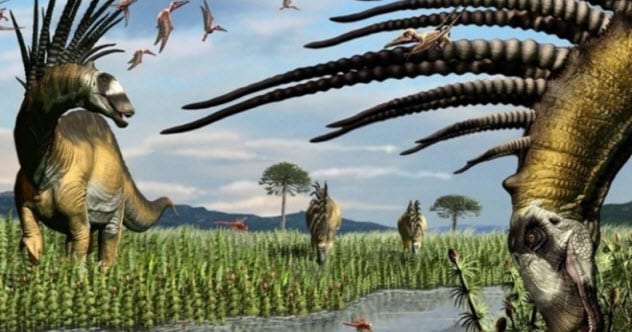 Among the most recognizable of dinosaurs, sauropods were giant herbivores with whiplike tails and long necks. Not all sauropods were big enough to use size as a defense.

In 2013, a smaller species was located in Argentina. The fossil belonged to a brand-new species called Bajadasaurus pronuspinax. At merely 9–10 meters (30–33 ft) long, it was tiny in comparison to other sauropods.

When paleontologists found a bony spine, analysis suggested that it was one of several that ran the length of the dinosaur’s neck and back, almost like a Mohawk. They were likely thin, sharp, and very long. In addition, the spikes probably had a layer of keratin that gave them a hornlike appearance.[7]

Since the bizarre feature vanished with the species 140 million years ago, confirming its purpose would be a difficult task. A plausible theory is that the sauropods developed Mohawks to look bigger and more dangerous than they really were. 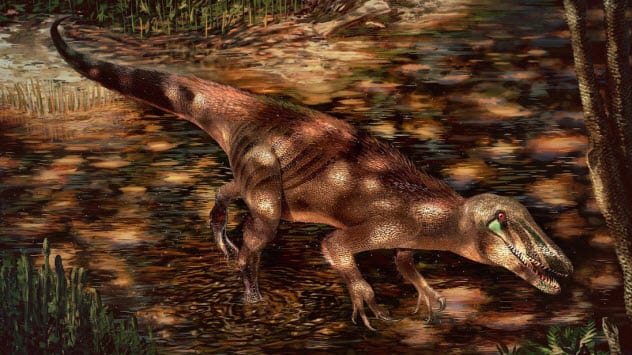 A pretty cool nightmare once haunted South America. The size of a truck, it ate meat and hunted with talons that resembled 40-centimeter (16 in) meat hooks. Its discovery in 2006 was a festive moment for scientists. Its group, Megaraptoridae, is exceptionally mysterious.

This specimen was also one of the largest of its kind and the last. Unfortunately, it lived in the Late Cretaceous when dinosaurs went extinct. Unearthed in Argentina, Tratayenia rosalesi managed to fill in some details about its species.[8]

The carnivore measured 9 meters (30 ft) long and had bones with air pockets. This feature exists in a living relative—modern birds. When T. rosalesi lived 95 million to 85 million years ago, it might have been more closely related to T. rex. This could explain the serrated, daggerlike teeth and why T. rosalesi was among the biggest and most lethal hunters of its time. 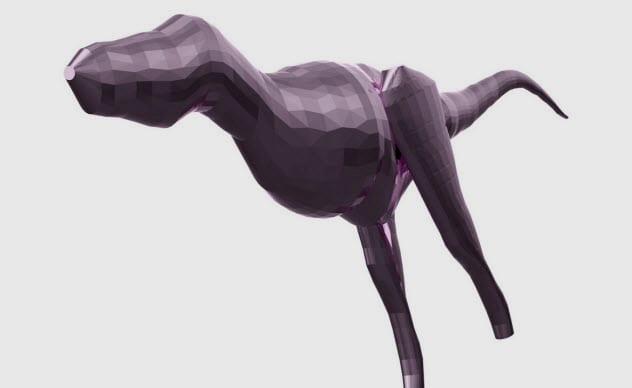 When most people think about Tyrannosaurus rex hunting, a large and stomping predator comes to mind. One might not credit this barreling hulk with turns that are precision moves. After all, these creatures weighed around 400 kilograms (880 lb). However, T. rex could intercept swerving prey by turning like a figure skater.

New research in 2018 found that their hip bones and leg muscles were specially adapted to make them the ballerinas from hell. Also, the kids were even deadlier. A juvenile T. rex could twirl faster than its elders, undoubtedly a perk that helped them survive to adulthood.

These dinosaurs lived during the Cretaceous (145 million to 65 million years ago). To see if pivoting was a thing among predators of the time, researchers used cutting-edge techniques to study other species that frightened everything else during the Cretaceous. When all the monsters were made to digitally turn on a single foot, T. rex spun up to three times faster than the rest.[9] 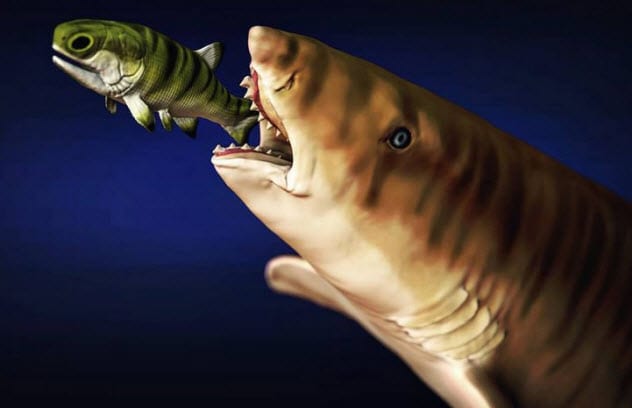 Around 330 million years ago (long before the dinosaurs), there was a shark unlike any other. Edestus was first discovered in the 19th century when fossils showed up in England and the United States.

Ever since, experts have argued about its eating habits—more specifically, why the so-called “scissor shark” had such weird teeth. The teeth of modern sharks grow along upper and lower crescents. Edestus‘s two rows of snappers resembled pinking shears. The feature has never been seen in any species before or since.[10]

As there was nothing for scientists to go on, debates and theories proliferated until a recent CT scan. The scan inspired a three-dimensional replica of the head which revealed the shark’s horrific chomp. Incredibly, the jaw appeared to work on a double-jointed system that sliced prey apart. As the shark bit, the sawlike teeth of the upper and lower jaws snapped together before the bottom slid backward to amputate a piece.