When you think of modern medicine, what do you picture out in your head? Pristine doctors in white coats speaking to you calmly, administering safe medicines in the comforts of a nice modern office? That’s not entirely wrong, as advances in the field have led to a majority of diseases treatable in this manner. However, medicine still has its darker side.

We’re not saying people are secretly chlorinating your water source or recycling dead bodies, but several medical procedures we seem unable to get past are largely crude and horrifyingly barbaric by today’s standards. If it works, stick with it, right? 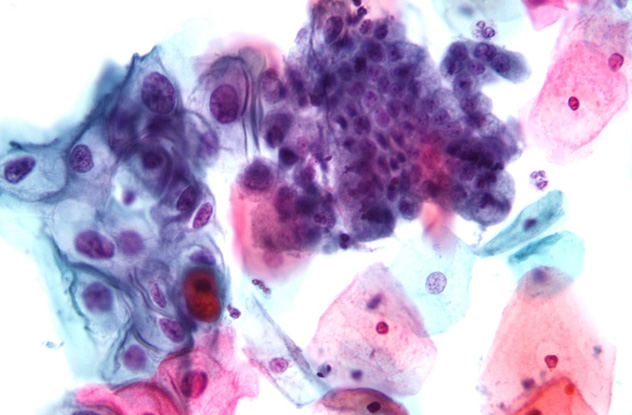 The fields of obstetrics and gynecology are probably among the bloodiest in medicine. Most women, due to problems with their uterus, have to undergo at some point in their lives what is known as “curettage,” or the scraping of the womb. This procedure involves the introduction of a sharp “curette” that scrapes the inner lining of the uterus. These tissues are then sent for analysis to make sure that nothing is wrong with them—namely, that there isn’t an early cancer growing particularly in the presence of problems with menstruation.

Other times, it may be done after a miscarriage to ensure that no remnants of the deceased baby are left. Although effective, it is nonetheless cringe-worthy and makes us wonder why nothing less invasive has been invented up to this day.

9Drilling A Hole Through A Skull 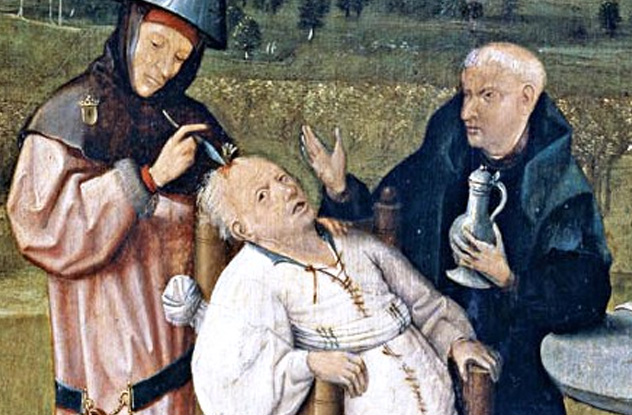 Probably the oldest procedure in medicine that is still practice today—the act of drilling a hole through one’s skull, referred to as “Burr Holing”—can be traced back to the time of Hippocrates and the early Greek civilization. The principle of the procedure remains largely the same, but the purpose and the methods differ.

Generally, while the early Greeks used to do it with the belief that headaches were caused by massive amounts of “water” in their heads that would cause an imbalance of the body’s functions, today’s patients who undergo this ghastly procedure usually have massive amounts of blood pooling beneath portions of their skull, often the result of severe trauma and accidents. There also exist other variations of skull carpentry, some of which involve removing a large portion of the skull and keeping it for use later. However, unlike in the older days of primitive surgery, all of this is done under heavy anesthesia.

Back in medical school, a rotation in the Department of Surgery often meant being exposed to blood, guts, and burning flesh. As barbaric as this sounds, the science of “cauterization” or “cautery” has drastically improved how surgeries are done.

Cautery simply refers to the act of searing a portion of flesh. This is done via a small electrical current that is driven through a handheld electrode that can be controlled with either a foot pedal or a button. Fundamentally, it refers to destroying microscopic layers of protein and ensuring that blood vessels are sealed shut in the process—an invaluable tool in procedures where one cannot risk having the patient lose too much blood. So the next time you see a surgeon, thank him for having the stomach to endure that oh-so-characteristic smell. Perhaps that’s what those masks are really for.

7Sticking A Tube Through Your Brain 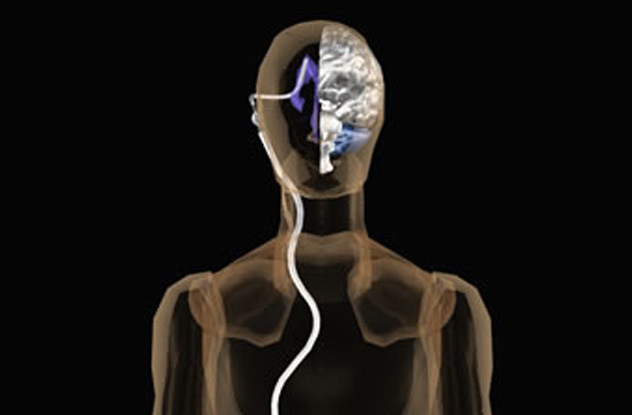 Many of us would like to think of the brain as the single most important untouchable organ in the body. So how would you feel if doctors told you they had to stick a tube into the deeper portions of your brain?

No, nothing sophisticated to it. Just a tube. Passing through your skull, burrowing into the cavities of your brain.

Yes, people still do this, particularly for cases where there is a pressure buildup inside the skull (hydrocephalus). However, as expected, it’s done under utmost controlled conditions. It is lifesaving, but despite that, the thought of having a tube rammed into your head is enough to scare the life out of most people.

6Shoving A Tube Down Your Windpipe

What happens when we don’t breathe? We get a machine to do it for us. However, despite the promise of noninvasive means of facilitating breathing, the most effective method still remains the crudest and the most invasive. This involves placing a special plastic tube (or “endotracheal tube“) down someone’s windpipe.

How do they place it in, doctor? Good question. In a nutshell, they get a metal blade that holds the patient’s mouth open while the doctor forces it down the windpipe. Simple. Effective. Yet utterly frightening.

It is, however, considered to be one of the more “heroic” measures that must be done in the event of cardiac arrest and for critically ill patients. So the next time you watch the next episode of ER or Code Black, look for the tube. Chances are, it’s bound to get shoved down someone’s throat. Fast. 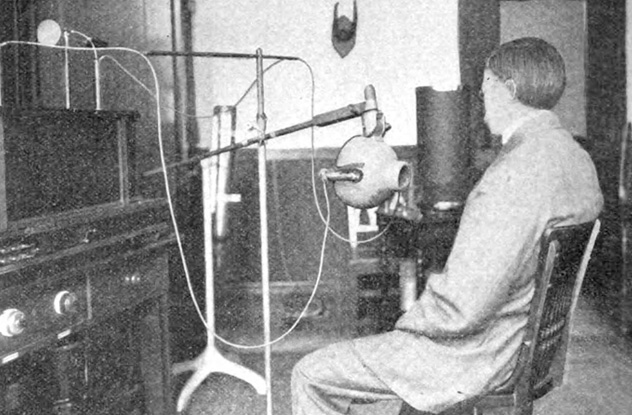 Cancers still remain among the most difficult diseases to treat in today’s medical landscape. Our understanding of cancer remains highly rudimentary, and our current methods of treatment reflect that. Generally, cancers are treated with a course of either chemotherapy (poison injected into your veins), surgery, or radiotherapy, or a combination of the three.

Radiotherapy is deadly radiation that is concentrated into the diseased site. Despite whatever fancy names companies think of, it is a beam that causes the tissues to either self-destruct or rot. It is a death ray, albeit a very precise and concentrated one. It’s not exactly pretty, nor is it without risks—other organs may also be affected should the procedure not be done properly. But don’t be afraid. We’re not going to see any scarred megalomaniacs strapping these onto sharks in his death lair anytime soon. 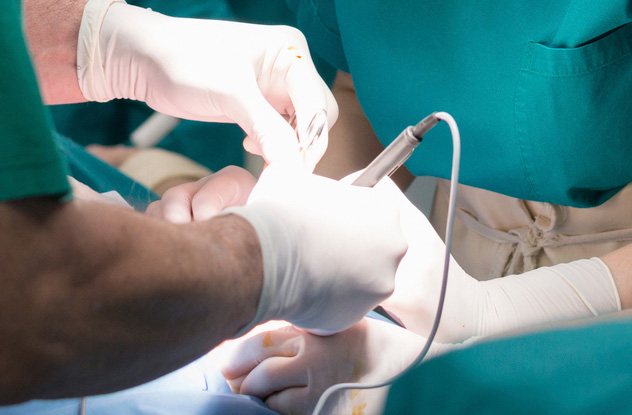 We’ve come a long way in terms of X-rays and other imaging. Today, we have CT scans, MRIs, and a bunch of other noninvasive ways to determine what’s wrong with our bodies. But what happens when nothing shows up on the readouts? And the patient’s still complaining that he’s about to explode? In most cases, most doctors have a good idea of what’s going on. But a confirmatory procedure, such as a getting a tissue sample or directly observing it, may be necessary.

So what happens? You guessed it. There are times when doctors conduct what is known as an exploratory surgery to tell what’s causing symptoms or diseases. They open you up and start probing to see what’s wrong. This may also be attempted in cases of emergencies where both a diagnosis and treatment are necessary, such as gun-shot wounds and other accidents. 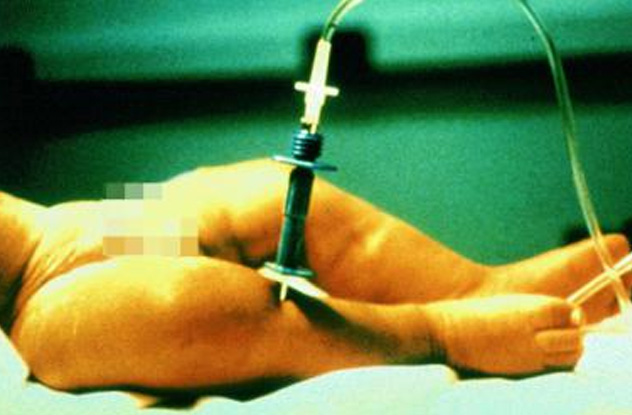 Apart from the famous Skyrim memes, the medical field has a penchant for doing many violent things to one’s knees, the most frightening of which is gouging a huge needle through the knee.

There exist numerous variations of this, the most brutal one of which is called “intraosseous cannulation.” This procedure involves sticking a large bore needle through the knee to deliver medications straight to the blood system, which can be achieved with the needle traversing the rich blood vessel network within the front portion of the knee. However, this is regarded as a drastic measure and used as an alternative to the usual vein lines in giving medications.

2Snapping Joints Back Into Place

On TV, have you ever seen someone fall and snap their leg into an awkward position? And then the character just snaps it back into place? We actually do that in the medical field.

Bones are held together at joints by a complicated system of ligaments (or stretchable tissue) and muscles forming a generally strong support system. However, when accidents happen, some of these joints are forced out of alignment and may fracture. In the absence of a fracture, where the bones are simply not aligned, there really is no other option than to snap it back into place, often immediately before the muscles start to tighten. 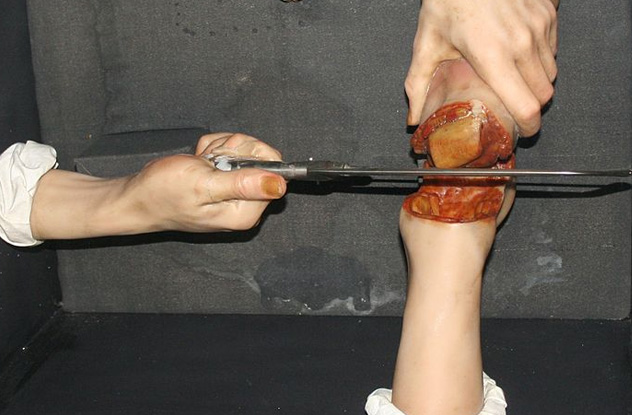 Nothing too drastic has changed in the long history of managing severely infected and destroyed limbs. Apart from trying to salvage one’s toes, fingers, arms, and legs through restoring blood flow, once the limb reaches the end game of having it rot, amputation is still the way to go.

Although we’ve mapped out most of the structures of the arms and legs we’d like to minimize injuring, the act of actually removing a limb to cure someone is still quite astonishing despite advances in science. So everyone—please do take care of those cuts and bruises, and if you’re diabetic, foot care and blood flow screening should be at the top of your to do list today.

Dr. Keith Andrew Chan is an internist and Internet meme extraordinaire. He often refers to himself as “The One” and frequents local milk tea parlors when not working at the hospital. He is a regular contributor to cebumd.com and writes for various national health publications. Follow him on Twitter for more medical humor.