Hundreds of years ago, miniature museums known as cabinets of curiosities were popular collections among royals, nobles, and educated members of the middle class who were wealthy enough to maintain them. Since travel was uncommon and restricted, many plants, animals, and natural objects seemed exotic.

Cabinets of curiosities displayed these natural marvels—with strange specimens and amazing artifacts from distant lands. More than mere amusements for the idle rich, these displays helped people to better know and understand the mysterious world around them. Photo credit: Russia For You

In 1714, Russia’s Tsar Peter the Great (1672–1725) established the Kunshtkameroy (“cabinet of rarities”) in Moscow. It has since been moved to St. Petersburg’s Summer Palace. By Peter’s order, travelers returned home with anything “exceedingly old and unusual” they’d found in their journeys.

Items such as “bones, stones, antique utensils, and weapons” might end up in his personal collection, which also contained “drugs from the collection of the Dutch anatomist Ruysch, various small animals and birds, [an] herbarium, butterflies, shells, and more.”

His cabinet also displayed more bizarre specimens: “heads of children, preserved in alcohol, embalmed body parts,” and human “monsters”—people who had “odd anatomical features.” Like many cabinets of curiosities, Peter’s expanded over the years as he added such artifacts as “ancient pagan items, household utensils and clothes, idols, rare coins and old manuscripts, mineral specimens, and much more.” 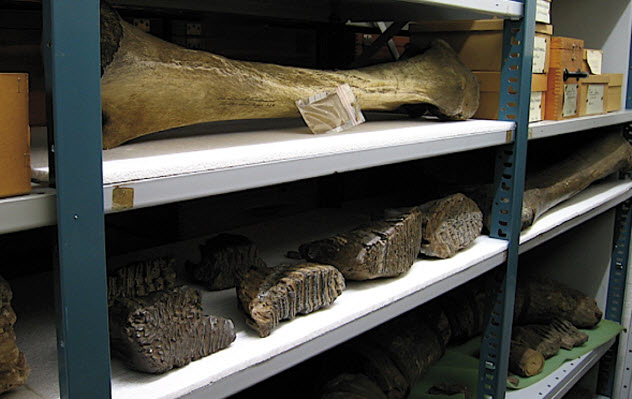 Denmark’s King Frederick III (1609–1670) also maintained a cabinet of curiosities, the Royal Danish Kunstkammer (“wonder room”) at Copenhagen Castle. Also known as the Museum Regium, it was installed in a six-room building erected in 1665 specifically for this purpose.

One of the chambers housed “naturalia,” including a hip bone recovered by Frederick’s physician, Dr. Sperling, near Bruges in Flanders, where an elephant’s skeleton, originally believed to be that of a “giant,” was unearthed. Other elephant bones and two partial sets of teeth were added to the collection.

The teeth were stored among such other bizarre items as horns that had allegedly grown from the ears of Frederick’s horse, a white sparrow, and a “small dragon, skillfully made.” Other specimens included five elephants, various parts of other elephants, and “a stuffed ox and walrus.”

Upon the demise of Ole Worm, another collector, Frederick purchased his cabinet and expanded his own collection of curiosities. 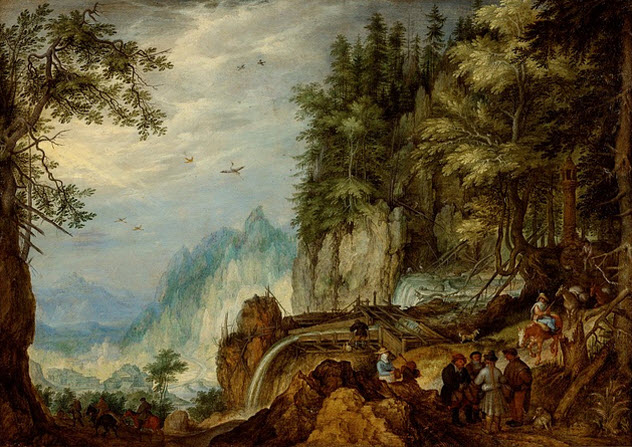 Photo credit: The World of the Habsburgs

Rudolf II (1552–1612), emperor of the Holy Roman Empire, had an extensive collection of artwork, rare antiquities, and exotic marvels known as the Kunstkammer (“art room”) and Wunderkammer (“wonder room”). Although these cabinets of curiosities no longer survive intact, the artifacts stolen from them in 1648 by Swedish forces during the capture of Prague demonstrate the vast size of the original collection, which had filled entire rooms of Rudolf’s castle.

Plundered items included numerous paintings, bronze figures, coins, medals, “vessels of agate and crystal, works of faience, Indian curiosa, works of precious stone, uncut diamonds, mathematical instruments, and many other objects.” Like many other cabinets, Rudolf’s was meant to suggest the wonders of nature reduced to a large but manageable collection that allowed observers to glimpse the beauty, wonder, and mystery of the world.

7 The Studiolo Of Francesco I de’ Medici 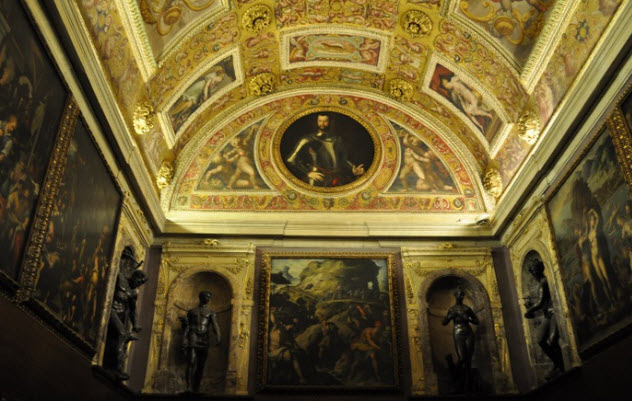 One of the first cabinets of curiosity was that of Francesco I de’ Medici (1541–1587), grand duke of Tuscany, who was passionate about both the arts and the sciences. In the vaulted room of the Palazzo Vecchio in Florence, Italy, which enclosed his cabinet, the grand duke kept “his mirabilia, rare and precious things from all over the world.”

He’d retire to this chamber to study the items, which occupied “20 cabinets distributed along four walls.” Each wall displayed objects related to a common theme suggested by a painting. Upon Francesco’s demise, his studiolo was dismantled. However, the collection has since been restored, although not exactly as it originally stood.

To ensure his privacy within his studiolo, its entrances were hidden behind the cabinet’s doors. Francesco appears in two of his studiolo‘s paintings, perhaps to suggest his role as a collector who appreciated the finer things of art and nature.

6 Chamber Of Art And Curiosities 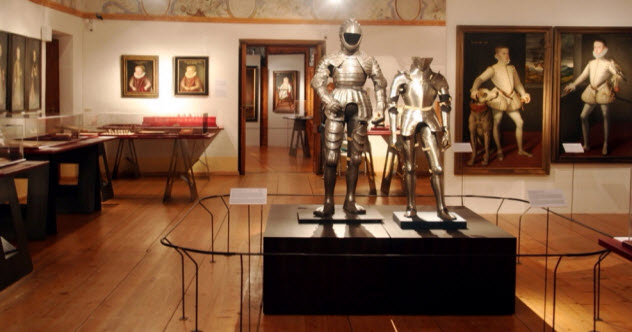 Ferdinand II, archduke of Austria (1529–1595), had the Chamber of Art and Curiosities at Ambras Castle in Innsbruck where it’s still on display today. A gouache painting, sent to the archduke by his ambassador to Spain, was an early direct advertisement of sorts, depicting objects for sale. The archduke purchased them all, thereby adding a rhinoceros horn, tooth, and skin, and “a covered goblet” fashioned from one of the animal’s horns to his “encyclopedic” collection. 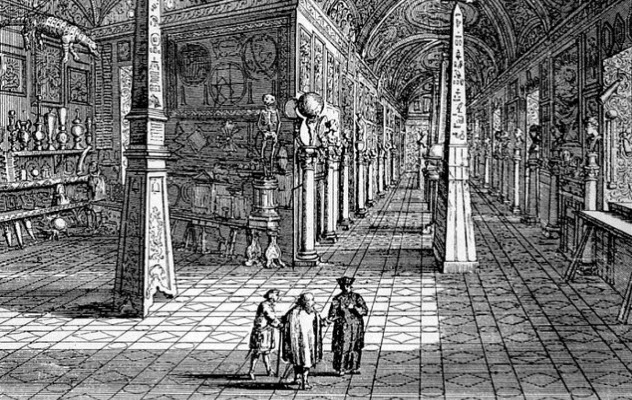 As the chair of mathematics at Collegio Romano, Jesuit priest Athanasius Kircher (1602–1680) indulged his passion for the rare and exotic marvels of nature by founding the Kircherianum, a cabinet of curiosities. When his collection became too large for his quarters, he moved it to more spacious accommodations and boasted that no traveler could claim to have seen Rome who hadn’t visited his cabinet.

The nobles of Europe flocked to his Kircherianum, which was so vast that it took decades to fully catalog. Kircher was a man of many ideas. He believed that some animals might be hybrids. The giraffe seemed to be a “camel-leopard mix,” and the armadillo in his own cabinet was, perhaps, “the progeny of a turtle and a hedgehog or porcupine.” As historian R.J.W. Evans pointed out, there were two types of cabinets of curiosities: “princely” ones that were collected and displayed by kings and nobles and smaller, less ambitious ones that were owned by scholars and others.

Despite financial limitations, Carniolan surgeon Belsazar Hacquet (1739–1815) managed to assemble an impressive array of 4,000 curiosities. They were well chosen, consisting of “specimens of Carniolan and foreign plants, a smaller number of animal specimens, a natural history and medical library, and an anatomical theater.” 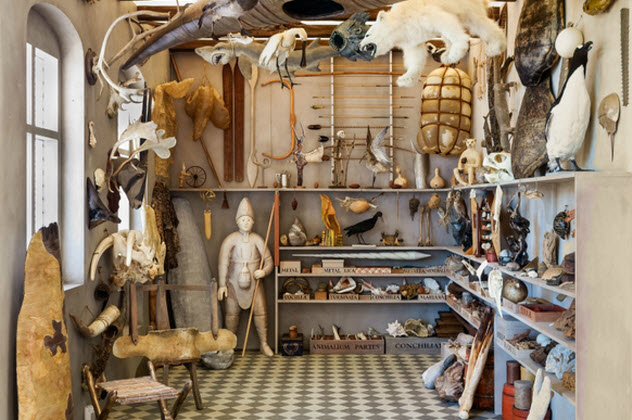 Danish physician Ole Worm (1588–1654) maintained a room-size cabinet of curiosities in his home. A mix of specimens from nature, science, and various cultures, it was intended to amaze, but it was also meant to inspire “study and understanding.”

A 1665 engraving of his Museum Wormianum shows some of the fascinating artifacts he kept on display. Skeletons of fish and birds hang from the ceiling while antlers and horns adorn one wall. Stuffed armadillos, huge turtle shells, crocodiles, and lizards decorate the facing partition. Stuffed birds, an ostrich egg, a human skeleton, skulls, and rocks and minerals occupy shelves.

Worm’s cabinet was also home to his pet auk (a species now extinct), a lemur, and a deer. His recreated cabinet is now a permanent part of the Geological Museum at Denmark’s Natural History Museum.

2 ‘The Ark’ Of John Tradescant The Elder Botanist and gardener John Tradescant the Elder (circa 1570s–1638), an entrepreneur as well as a collector of curiosities, charged the public a fee to see his cabinet. Admittance must have been worth the price because royals and nobles were among its visitors.

With assistance from others, Tradescant was able to gather such a wide variety of strange specimens that his cabinet was nicknamed “The Ark.” Tradescant willed his collection to his son. But upon Tradescant the Younger’s death, the cabinet fell into the hands of neighbor Elias Ashmore after Hester, the Younger’s widow, accused Ashmore of stealing from her and “ended up facedown and dead in a shallow pond on her own property.” 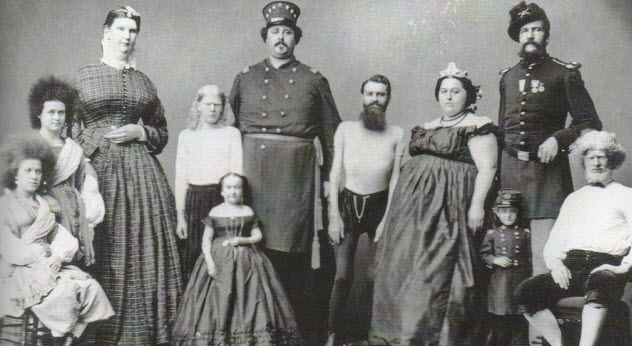 Americans were as fascinated as Europeans by curiosities, and the great showman P.T. Barnum (1810–1891) understood how to capitalize on their appeal. After gathering a host of them, Barnum enlivened his exhibits with “live curiosities,” such as “industrious fleas, a hippo that he told audiences was ‘The Great Behemoth of the Scriptures,’ and assorted bearded ladies.”

The result was half-museum, half-circus, and the public loved it. Many of the artifacts ended up in Barnum’s American Museum in New York City, which drew 15,000 visitors per day according to Barnum.

Gary Pullman lives south of Area 51, which, according to his family and friends, explains “a lot.” His 2016 urban fantasy novel, A Whole World Full of Hurt, will be published by The Wild Rose Press. An instructor at the University of Nevada, Las Vegas, he writes several blogs, one of which is Chillers and Thrillers: A Blog on the Theory and Practice of Writing Horror Fiction at http://writinghorrorfiction.blogspot.com/.