Today, he and his family—the infamous Borgias—are viewed as one of the most evil organizations in all of history. And yet, this family is responsible for some of the greatest contributions to human society. There are people and works of art that changed society so drastically that a world without them is almost impossible to imagine—and we owe every one of them to history’s most evil Pope. 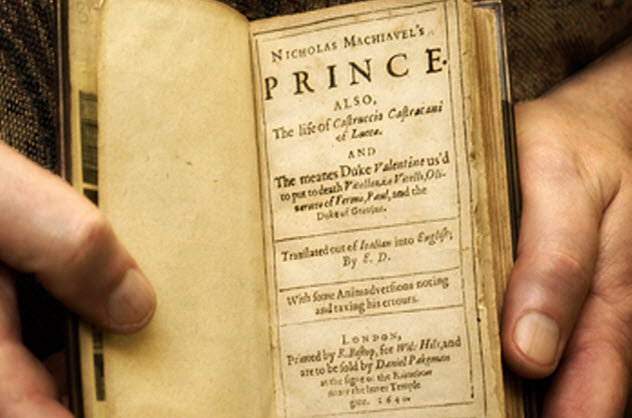 Machiavelli’s The Prince is one of the most famous political treatises ever written. Leaders from Napoleon to Mussolini and even Bill Clinton have all studied Machiavelli’s ideas on how to lead a nation.

Machiavelli, though, was studying Cesare Borgia, Alexander VI’s son, who led a conquering army into northern Italy. In the early 1500s, Machiavelli worked with Cesare and wrote letters of fawning adoration about him.

It was watching Cesare Borgia in action that inspired Machiavelli to write The Prince, which is based on Cesare’s tactics and ideas of politics. Since then, the history of the world has been shaped by men who have read the book. 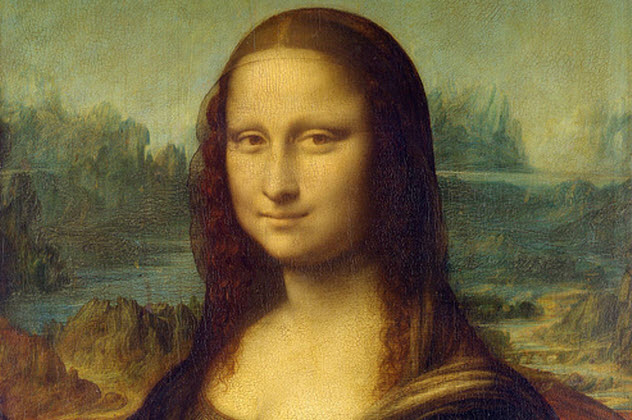 The Mona Lisa is probably the most influential work of art in the world today. It lures crowds of thousands to the Louvre to get a glimpse of it. But it wouldn’t have existed without the Borgias.

During Cesare Borgia’s invasion of Italy, Leonardo da Vinci worked as his chief engineer. Cesare gave da Vinci a passport ordering all who were shown it to obey da Vinci’s demands. Cesare also sent da Vinci through the Apennine Mountains—the area which would become the backdrop of the Mona Lisa.

Da Vinci started the painting in 1503 while still in Cesare’s employ. Although it took the notoriously slow da Vinci years to finish, the Mona Lisa would never have been created without the creative freedoms and inspiration the Borgias gave him. 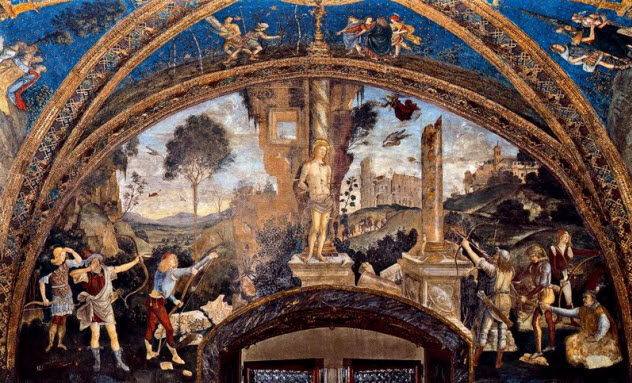 Da Vinci and Machiavelli’s works were saved from Pope Julius II’s purge of everything associated with Alexander VI because they worked slowly. Their artwork wasn’t finished until after Alexander VI’s reign had ended, so they kept their place in the history books.

Others, like the painter Pinturicchio, were not as lucky. Commissioned by Pope Alexander VI to decorate his apartments, Pinturicchio filled them with works that were masterpieces in their day. They were dotted with fake jewels to create a unique, three-dimensional feel and filled with extravagant, religious imagery.

Then they were locked up and covered in black paint for nearly 400 years because they belonged to the Borgias. No one could see the artwork until 1889 when the Vatican finally reopened the apartments.

7 The First Painting Of A Native American 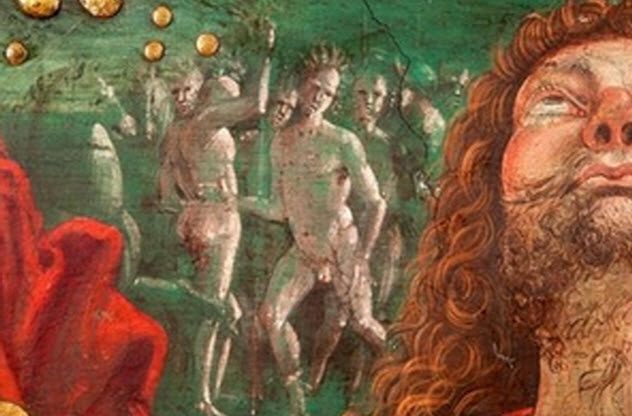 The Resurrection, one of Pinturicchio’s works, was particularly notable because it was the first painting of a Native American. Created in 1494, only two years after Columbus landed in the New World, it was likely the first view many Europeans had of an inhabitant of the New World.

Columbus wrote descriptions of the people in America in his journal, which he tried to keep a closely guarded secret. But that would have made its way into the hands of the Pope. According to modern scholars, Pinturicchio’s artwork shows every sign that he was given access to Columbus’s private journal and did his best to recreate what was written down.

6 The Spanish Conquest Of America 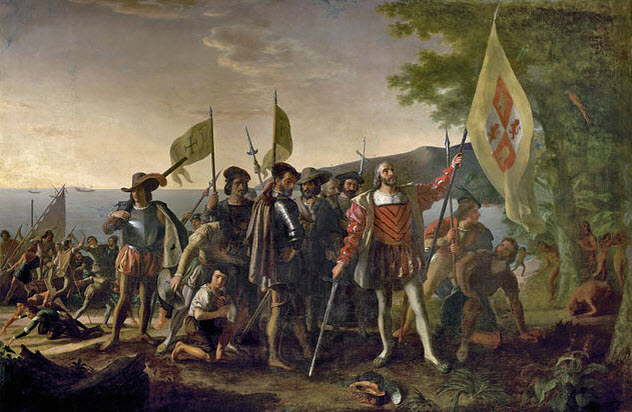 The history of the world would have been incredibly different if Spain had not colonized the Americas. As the conquistadores swept through the newly discovered continent, entire nations were wiped out and replaced by the Spanish Empire. The European colonization of the Americas had begun.

None of this would have happened without Alexander VI. When Columbus returned to Spain in 1493, Pope Alexander VI rejected the claims of other nations and issued a papal bull that gave the New World to Spain.

In return, the Spanish announced that all indigenous people of the Americas had to convert to Christianity or be forced into slavery, a law that led to the extinction of countless people and the extraction of a fortune from the New World.

Even though this might not have been a good thing, Alexander VI’s decision has shaped the geography and balance of power across the world ever since.

5 The University Of Aberdeen 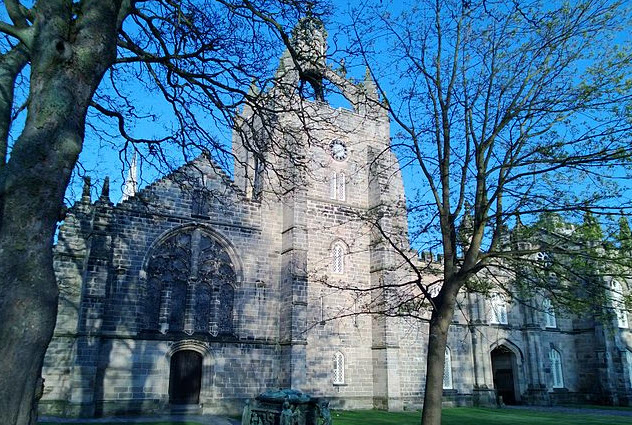 The University of Aberdeen, one of the top universities in the world, has fostered five Nobel Laureates. None of them would have received the educations they did without Alexander VI.

In 1495, King James IV petitioned Alexander VI to issue a papal bull calling for the construction of a school in Scotland. James hoped to improve the educational standing of the country. Alexander VI agreed, and the school opened its doors.

Since then, it has grown so much that the original King’s College is just one old building in the center of a large campus. But the school never would have existed without the influence of the Borgias. 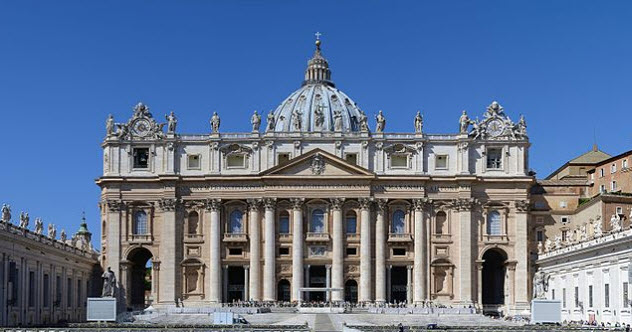 St. Peter’s Basilica is considered one of the holiest Catholic shrines and one of the most beautiful works of architecture on Earth. The building is placed upon what is believed to be St. Peter’s burial grounds. The Roman Emperor Constantine first set a cathedral on the site, but it was through the patronage of Alexander VI that the current one got its home.

Though the Church’s most famous architect is Michelangelo, St. Peter’s Basilica was planned by Donato Bramante, a member of the Borgias’ entourage. Bramante had close ties to Alexander VI, who helped foster his career and had him design cathedrals around the country.

Alexander VI persuaded Bramante and Michelangelo to work together on the new St. Peter’s Basilica, although it wasn’t completed until well after Alexander’s death.

3 The Modern Depiction Of Christ 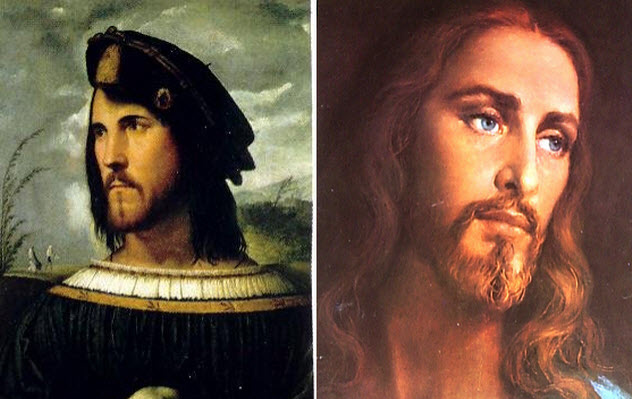 When we picture Jesus Christ today, we usually think of a white man with long, straight, brown hair and a well-kept beard—an image that doesn’t exactly fit a Middle Eastern Jew.

With the Borgias’ close ties to the art world, the possibility of Cesare posing as a model while Michelangelo was painting Christ doesn’t seem that far-fetched. Granted, there isn’t much hard evidence for this, but the similarity between the paintings is so striking that it’s been noticed more than once.

2 Raphael’s Portrait Of A Lady With A Unicorn 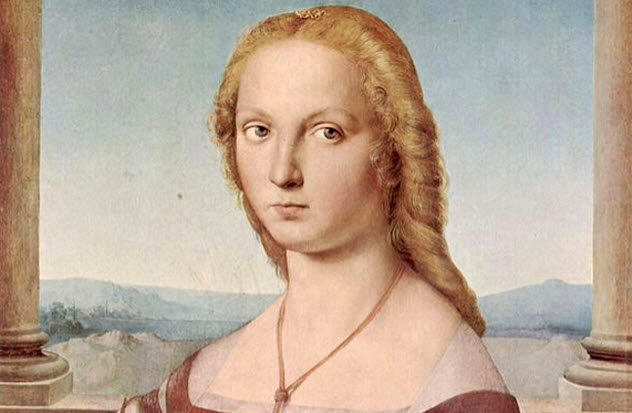 In Raphael’s oeuvre is a mysterious painting of a blonde woman holding a baby unicorn. For a long time, this woman was unidentified. Now the woman is believed to be the daughter of Alexander VI’s mistress and, in all likelihood, his illegitimate child.

It’s a theory that fits nicely. Alexander VI was an avid patron of Raphael’s work, so it’s not too shocking that Alexander may have commissioned a painting of his daughter from Raphael.

However, when Julius II purged all Borgia art from the Vatican, he replaced it with new works of his own—works that he commissioned through Raphael. This led to Raphael creating the Vatican’s “Raphael Rooms,” which are often considered his masterpieces.

Some even think that Julius’s hatred of Alexander fueled Julius’s desire to become a patron of the arts in his own right. This would have had a major cultural impact as Julius II is often considered one of the greatest patrons in history. 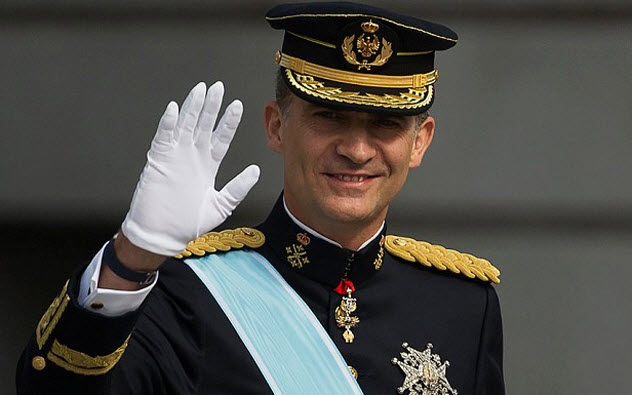 The Borgias aren’t really gone. The family lives on and holds as much power as ever, but we might not realize it. Alexander VI’s daughter, Lucrezia, has been linked as a direct ancestor to an astonishing number of European leaders, including the current kings of Spain (pictured), Bulgaria, Belgium, and Portugal.

Major historical figures are direct descendants of the Borgias. For example, England’s King Henry IV was the great-great-nephew of Cesare Borgia, making the Borgia blood a major part of the English monarchy.

Descendants of the Borgias live in almost every royal family in Europe today—meaning that the Borgia legacy hasn’t ended. Their names have changed, but they are still inside some of the most powerful homes throughout history, influencing decisions that have shaped every part of today’s world.