The word “outlaw” probably calls to mind the Wild West, where desperadoes like Billy the Kid and Jesse James carved out a place in history. But the Australian outback was every bit as wild. The bandits who flourished there were even more ruthless and outlandish than the gunslingers we know and love. 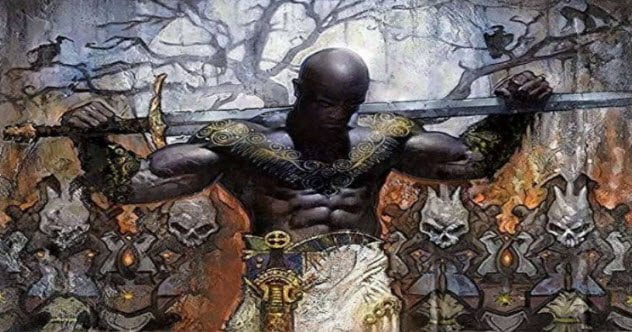 In 1787, John Caesar was part of the “First Fleet” that established the prison colony at Botany Bay. He was of African descent and became known as “Black Caesar” in Australia, where he was renowned for his strength and toughness. When the famous Aboriginal warrior Pemulwuy attacked a work party, Caesar cemented his reputation by personally taking Pemulwuy on and nearly killing him.

In 1789, Caesar escaped into the bush with a stolen musket. But game was scarce. He had to support himself by lurking near the colony and stealing what he could, which soon led to his recapture. He remained defiant and told his jailers that if he was hanged, he intended to “create a laugh before he was turned off, by playing some trick upon the executioner.”

Caesar made another escape months later but returned after being speared by local Aborigines. He escaped a third time in 1795, this time leading a gang of escaped prisoners who raided the Port Jackson area. He was shot by bounty hunters the next year. 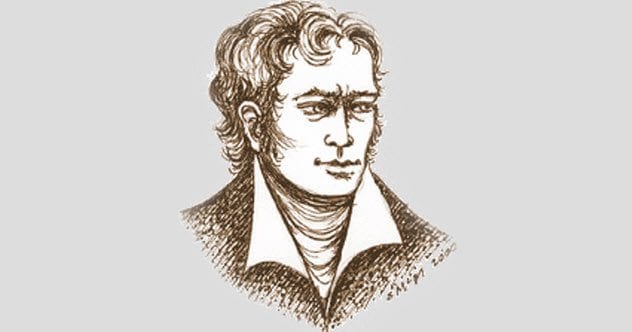 After being transported to Australia, Matthew Brady challenged the brutal colonial regime and was flogged multiple times before he finally escaped in 1824. He became a bandit and soon earned respect for his “gentleman” persona—he was always polite to his victims and let women go unharmed.

Governor George Arthur soon offered a large reward for his capture. Brady daringly responded by posting a counteroffer which read: “It has caused Matthew Brady much concern that such a person as Sir George Arthur is at large. Twenty gallons of rum . . . to any person who can deliver him to me.”

The flamboyant criminal was eventually captured by Batman (settler John Batman, that is). 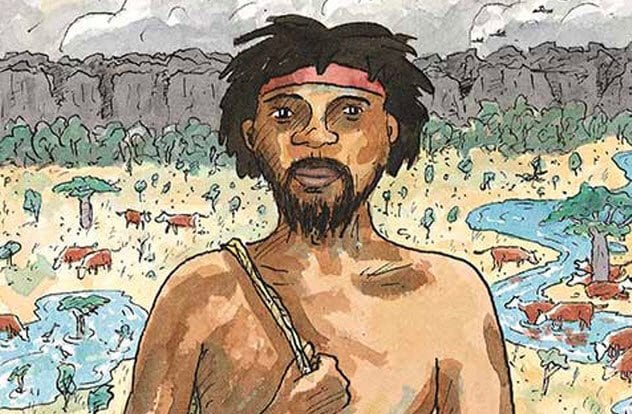 Jandamarra worked as a tracker for the Western Australian police. One day, he and a white officer named Richardson arrested a group of resisters—including Jandamarra’s uncle—from Jandamarra’s Bunuba tribe. While Richardson slept, the Bunuba begged Jandamarra not to betray his people. Overcome by remorse, he shot Richardson and unchained the Bunuba.

Escaping into the Kimberley, Jandamarra became the most famous outlaw in the country, leading a guerrilla war against the settlers. Europeans were amazed by his ability to elude pursuit and go barefoot over terrain that ripped their boots to threads. In one famous incident, the police thought they had Jandamarra cornered in a cave, when he had really slipped out a secret exit and was raiding their police station.

The authorities eventually brought in an aboriginal tracker named Micki from a distant part of the country. In 1897, Micki pursued Jandamarra to his hideout and the two faced off on the edge of a cliff. Jandamarra missed, but Micki’s shot hit Jandamarra in the chest, sending him into the ravine where the police later recovered his body. 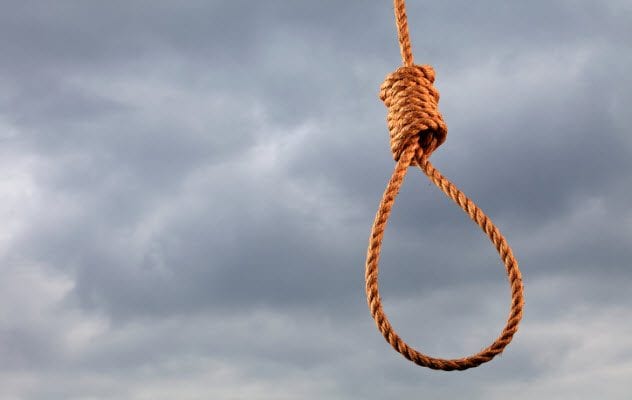 The only known Jewish bushranger was Edward Davis, known at the time as “Teddy the Jewboy.” In 1832, he was transported to Australia for stealing but insisted that he had been wrongly convicted. He simply could not get over this injustice and made numerous escape attempts.

After his fourth escape, he formed a gang of bushrangers who roamed across New South Wales. The band was an unusual sight. They dressed in flashy clothes and tied pink ribbons to their horses. Davis bore “curious tattoos” and enjoyed acting like Robin Hood, stealing from the rich and sharing the loot with their impoverished servants.

Davis hated violence, but one of his gang inevitably killed someone. Although Davis wasn’t present for the murder, he eventually hanged for it. He apparently showed great remorse and went to his death accompanied by the reader of Sydney Synagogue. 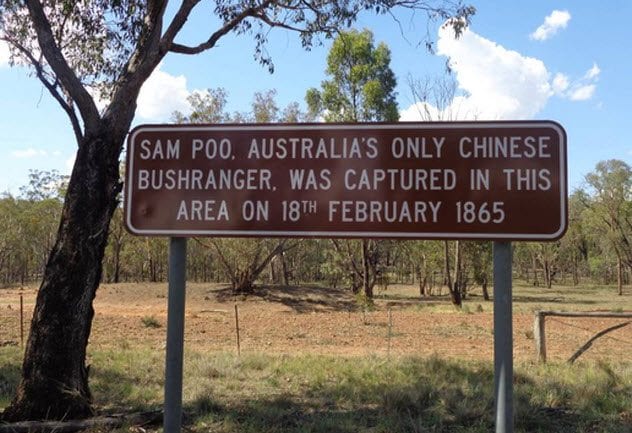 Sam Poo was a Chinese immigrant who came to Australia to work as a miner around 1864. Soon, he found that holding up travelers was more to his liking and became notorious for robberies and rapes along the Mudgee Road.

Disguised as a civilian, a trooper named John Ward was sent to travel the road in the hope that the elusive Poo would take the bait. Sure enough, trooper and outlaw were soon locked in a lengthy running gunfight through an abandoned goldfield dubbed Barney’s Reef.

Ward was eventually shot in the chest. Poo looted Ward’s body and left him to die, but he clung to life until a local rancher found him the next day. Just before Ward died a short time later, he gasped, “Take care of my wife and children.”

An Aboriginal tracker known as Harry Hughes then offered to track down Poo. After another massive gunfight, a trooper shot Poo in the leg and Hughes finished the job with his rifle butt. 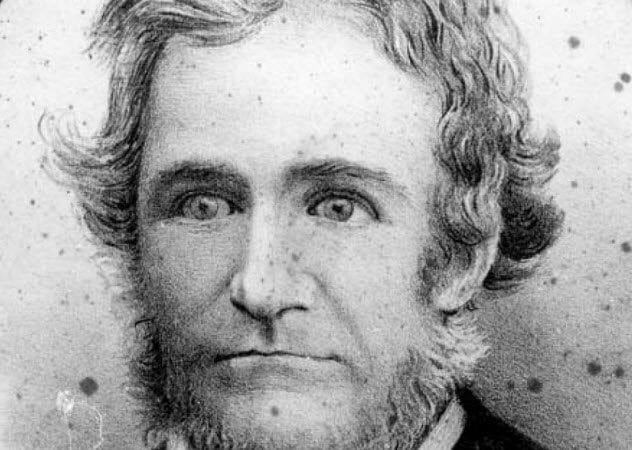 In 1827, Martin Cash was sent to Australia after shooting a romantic rival in the buttocks. He escaped from prison three times over the next few years. His final breakout was from the supposedly escape-proof Port Arthur jail. Despite the prison’s reputation, Cash and two others were able to swim across a shark-infested bay to safety.

When not in prison, Cash was one of Australia’s most notorious bushrangers, attacking travelers and raiding isolated settlements. In 1843, he was finally captured and sentenced to death but received a last-minute reprieve. He later moved to New Zealand, where he became a police officer until he was fired for also running a brothel. 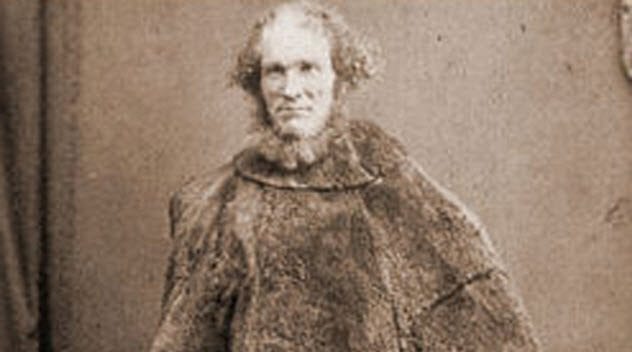 Moondyne Joe’s actual crimes were nothing to write home about—mostly raiding chicken coops and stealing horses. But he wrote himself into Australian history with his multiple daring escapes from prison.

Born Joseph Bolitho Johns circa 1826, “Moondyne” made his first escape from prison after he was arrested for stealing a horse. (As part of the getaway, he stole the same horse again.) Over the next few years, he escaped from prison three more times. Frustrated, the prison built a special escape-proof cell using over 1,000 nails and huge planks of wood.

Joe’s health deteriorated while locked in the tiny cell, and he was eventually allowed to break rocks in the prison yard. Obscuring his blows behind a pile of stones, Joe actually used the pick to break a hole in the wall, making his fifth and final escape in 1867. Known as “Friendly Bushranger,” Daniel Priest terrorized Tasmania in one of the most well-mannered crime sprees in history. He was always polite to his victims and never took more than they could afford. He even conducted one armed robbery in a whisper after hearing that a sick child was sleeping upstairs.

When he was arrested in 1845, Priest congratulated the arresting officer and then cheerfully admitted to everything at his trial, saying that he would “deny nothing that’s true.” He also told the police where to find the rest of his loot.

Priest’s death sentence was reduced to 10 years in prison after many of his victims signed a petition calling for him to be treated mercifully. John Donohoe was transported from Dublin in 1823. He was assigned to work on the estate of a local doctor but escaped and began holding up wealthy travelers in the area. It was said that he always acted with style and once gave a landowner his watch back because he had a good reputation. However, cruel overseers risked being left tied to an anthill.

Donohoe was captured and sentenced to death in 1828, but he escaped and resumed his bushranging career. Before long, he was the most feared outlaw in Australia. A local later recalled meeting Donohoe, who “was the most insignificant looking creature imaginable, and it seemed strange that he was able to keep a country in terror for eight years.”

Donohoe was killed in a shoot-out in 1830 while daring the police to “come on, using the most insulting and indecent epithets.” A veteran of New Zealand’s Maori Wars, Andrew George Scott arrived in Australia in 1867. Two years later, a masked figure held up a local bank, leaving a classy note saying that the teller wasn’t to blame. It was signed “Captain Moonlite.” Ungratefully, the teller in question told the authorities that the robber was clearly Scott.

While serving time for the crime, Scott dug through the walls of his cell and escaped but was quickly recaptured. Combined with the catchy “Captain Moonlite” nickname, the escape made him a celebrity. He was unable to get work when he was released because everyone thought he was a ruthless bushranger. With nowhere else to turn, Scott decided to actually become a ruthless bushranger, holding up an isolated hotel and killing a police officer in a shoot-out.

The police fired back, killing a member of Scott’s gang named James Nesbitt, who was probably his lover. Scott later wrote that Nesbitt “died in my arms. His death has broken my heart.”

Scott went to the gallows wearing a ring of Nesbitt’s hair. In 1995, his body was moved to a grave next to Nesbitt’s in accordance with Scott’s final wishes.

10 Unsolved Crimes That Were Caught On Video