Having to go to the dentist is as appealing as a colonoscopy. More often than not, it triggers anxiety and fear in the patient. The following 10 stories focus on historical, intriguing, and downright bizarre facts pertaining to the respected profession of dentistry. 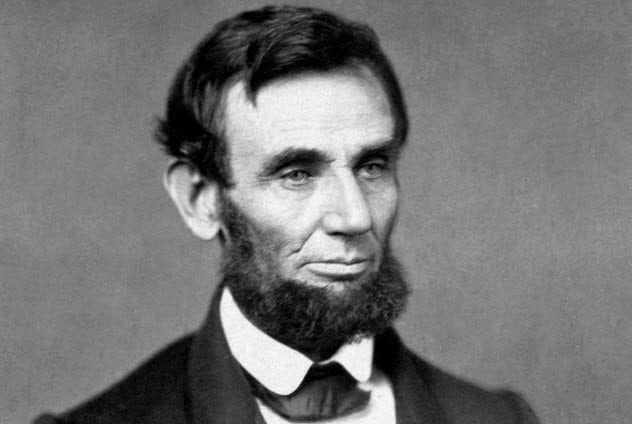 Abraham Lincoln had terrible dental anxiety rooted in a faulty tooth extraction in 1841 that resulted in part of his jawbone breaking off. The 16th US president endured such pain without anesthesia.

Thus, when a severe toothache came calling years later, he wasn’t the slightest bit amused. Reaching into his pocket, Lincoln withdrew a bottle of chloroform, inhaled it, and nodded for the procedure to begin as he gently slipped away into unconsciousness.

The use of chloroform as an anesthetic was not known at the time, leaving many to ponder how Lincoln knew of its properties. These days, the sitting president doesn’t have to travel far to take care of unexpected tooth ailments because Herbert Hoover established a dental office in the subbasement of the White House. 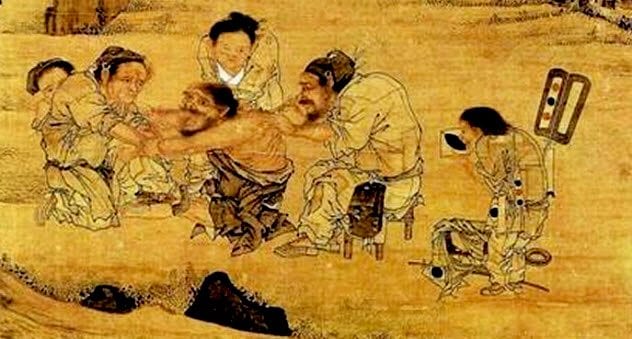 As far back as 2700 BC, the Chinese were using acupuncture to assuage the pain of tooth extractions, decay, gingivitis, stomatitis, and glossitis with 116 points on the surface of the body believed to be directly linked to teeth and other oral structures.

Moxibustion, a technique that involves the burning of the herb mugwort, was often used with acupuncture to facilitate healing. Once the mugwort was aged, the herb was ground up and formed into a stick that was lit on one end and usually burned onto the patient’s skin.

This practice was believed to produce analgesia in addition to strengthening the blood, stimulating life energy, and maintaining one’s overall health. By the second century AD, the Chinese began using arsenic to treat decaying teeth, a practiced believed to kill the tooth’s pulp while simultaneously relieving one’s pain. 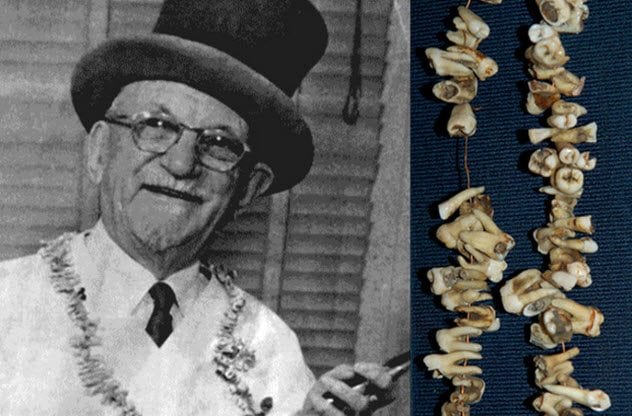 In the early 20th century, Edgar Parker found a way to allay the fears of his patients through unconventional methods of distraction. Following a decline in business, he toured the US in a horse-drawn wagon, bringing with him a flock of showgirls, nurses, and buglers.

In every new town, Parker drew an audience with his colorful theatrics while simultaneously pulling teeth and offering patients whiskey and cocaine-based hydrocaine. In time, he adopted the name “Painless Parker” and wore a necklace of 357 teeth.

He claimed to have pulled them in a single day, much to the disdain of The American Dental Association. They declared that Parker was a “menace to the dignity of the profession.”

To elude lawsuits for false advertisement, Parker legally changed his name from “Edgar” to “Painless.” His theatrics were ultimately a financial success. He retired with $3 million. Alberto Nunez, a 32-year-old Chicago resident, had a thriving dental practice for over two years, averaging around 30 patients a week. Due to the high volume of patients, they often had to wait a week before being seated in his dental chair. His future looked promising.

The only problem: Nunez was not a real dentist, and his office was based out of a home.

Following a tip, the Special Operations Unit opened an investigation into Nunez’s fraudulent practice. Posing as a patient, an undercover officer made an appointment and concluded that Nunez had been performing a variety of dental procedures including root canals, dental surgery, bite impressions, cleanings, and braces.

In 2012, Nunez was charged with a Class 4 felony for practicing without a license and a misdemeanor for unlawful possession of hypodermic syringes. 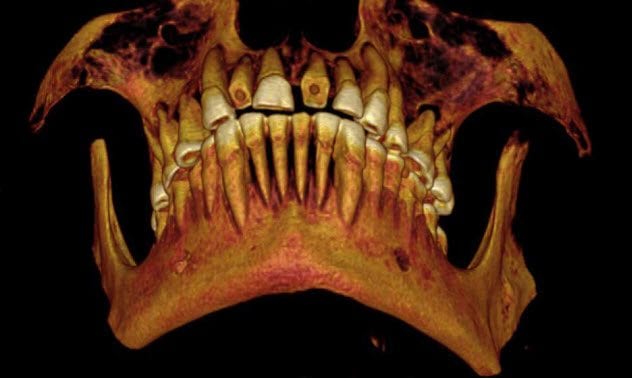 The ingenious reasoning of prehistoric people never ceases to amaze scholars, including evidence of tooth drilling performed more than 7,500 years ago in what is now Pakistan. A jawbone discovered in a cave in present-day Slovenia is the earliest evidence of dental fillings, with a lump of beeswax applied to ease the pain from a crack in the enamel.

This form of treatment was practiced in ancient Egypt 2,100 years ago when a young man succumbed to an excruciating sinus infection brought on by numerous dental abscesses.

According to researcher Andrew Wade from the University of Western Ontario, linen was dipped in medicine to ease the patient’s pain and then packed inside the cavity to act as a barrier to food particles. In fact, dentistry was practiced in ancient Egypt dating back to the construction of the pyramids. 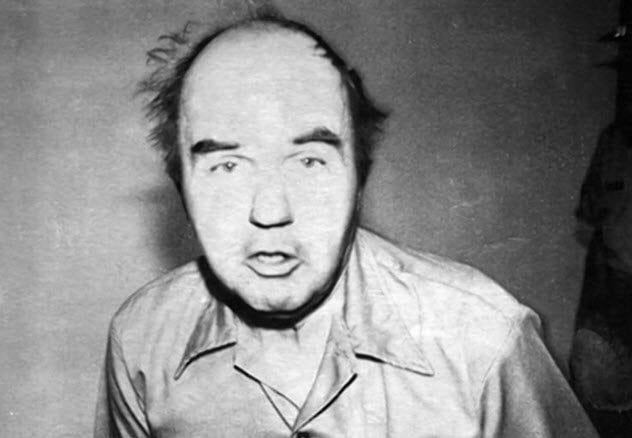 Glennon Engleman was a respected member of his community with a prominent dental practice. Yet behind closed doors stood a dark and sinister man who compares to society’s most notorious killers. His carnage spanned well over two decades, with various methods of murder ranging from shooting, bludgeoning, and car bombs. He even threw a man down a well with sticks of dynamite to ensure his death.

Although police were certain that Engleman was their man, it took his third wife to seal his fate. Following a night of sex, Engleman bragged to her about how he had murdered countless people and hinted that she might be next. After detectives coerced her to wear a wire, Engleman incriminated himself, bringing an end to the madness that had plagued St. Louis.

In September 1980, Engleman was found guilty for blowing up Sophie Marie Barrera and received two life sentences. Suspected in 12 murders, he confessed to only five. He died in prison at age 71 in 1999. 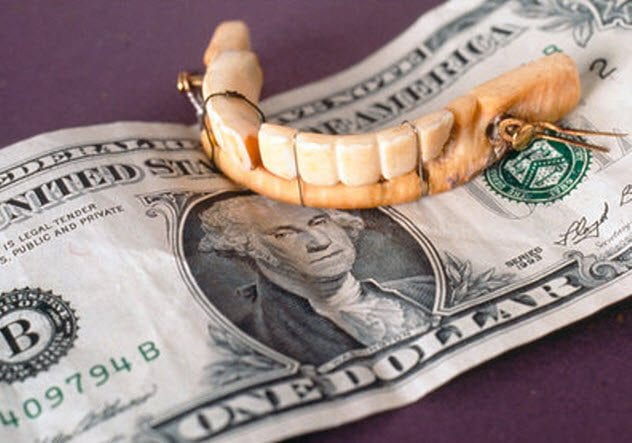 Contrary to popular belief, George Washington’s dentures were not made of wood but of hippopotamus ivory. They are on display at the National Museum of Dentistry in Baltimore. Though it’s not surprising that Washington’s dental hygiene was substandard—he only had one tooth during his inauguration—many point to his lifetime of poor health as the reason why.

If contracting smallpox wasn’t enough, Washington was plagued throughout his life by ailments such as malaria, dengue fever, rheumatic complaints, and bouts of dysentery. His medical treatments, which included mercurous chloride, were quite abrasive and led to the destruction of tooth enamel and unremitting toothaches.

This led to frequent episodes of inflamed gums and abscessed teeth that required extraction on a yearly basis. In fact, historians believe that dental problems were Washington’s reason for forgoing his second inaugural address. Sugar consumption was on the rise in the late 18th and early 19th centuries as was teeth whitening using acidic solutions. As people’s tooth enamel inevitably wore away, the demand for false teeth grew. Consequently, some of the poorest in society took advantage of the booming market.

Given that dentures with human teeth could fetch well over £100, some poor people resorted to pulling out their teeth in an attempt to sell their crowns to wealthy dental patients. As the number of living donors began to decline, people set their sights on the battlefield at Waterloo where thousands of fallen soldiers remained.

In 1815, surviving troops, locals, and even scavengers who had traveled from Britain began pulling the teeth of the dead to sell them to dental technicians. The teeth were then boiled and shaped prior to being placed on ivory dentures. The UK’s Anatomy Act of 1832, which licensed the movement of human corpses, ultimately reduced the use of human teeth in dentures. According to recent studies in dental literature, dentists are more prone to physical and emotional problems such as alcoholism, drug addiction, marital strife, and suicide. In fact, the suicide rate of dentists is three times higher than that of other white-collar workers and more than twice the rate of the general population.

However, the number one killer of dentists is stress-related cardiovascular disease, with 25 percent more high blood pressure and coronary disease than that of the general population. This begs the question as to why the dental field is more prone to stress, mental problems, and social problems.

Studies indicate that isolation from working alone, compounded by intense competition and economic pressures, inevitably leads to burnout. In turn, dentists become emotionally and mentally exhausted, often developing negative attitudes toward their patients, their staff, and themselves. In addition, working with apprehensive patients evokes physiological stress responses in dentists that lead to early cardiovascular complications. On April 30, 1945, Adolf Hitler committed suicide. His body was subsequently burned in a bomb crater in the Reich Chancellery garden, only to be discovered by the Russians three days later. In 1973, his jaw remains were examined by dental experts, bringing an end to much speculation surrounding his demise.

Comparing the remains to dental records provided by Hugo Blaschke, Hitler’s US-trained dentist, was not only informative but pleasurable given the torment that such a vile man had endured.

To say that Hitler had very bad teeth would be an understatement. He was plagued with debilitating gum disease, abscesses, and tooth decay, all resulting from severe periodontal disease that led to painful reconstructions. This was also the cause for Hitler’s “terrible bad breath.”