Silver is a precious metal that has been used for thousands of years in currency, ornaments, utensils, and trade. Alchemists have linked silver to power of the Moon and the mysteries of the sacred feminine.

It has the highest conductivity of any metal and is critical in solar panels, industrial electrical contacts, and medical instruments. “Silver” is a synonym for “money” in Hebrew, Sanskrit, Spanish, and French. 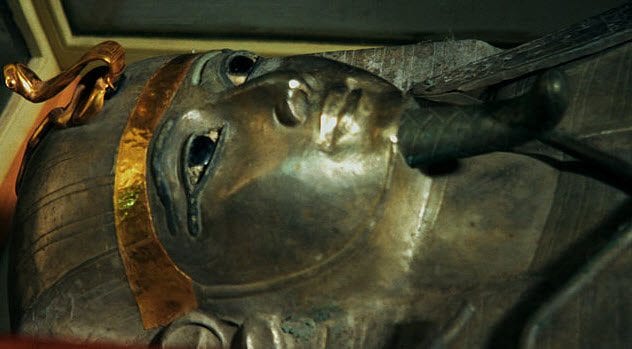 In 1940, French archaeologist Pierre Montet discovered a pharaoh with a coffin made of pure silver. Psusennes has been dubbed “the silver pharaoh.” According to the ancient Egyptians, gold was the flesh of the gods, and silver, their bones.

However, silver needed to be imported from Western Asia, which made it the most precious metal in ancient Egypt. Psusennes’s coffin reflects staggering wealth and casts aside assumptions about the limited power of 21st dynasty pharaohs.

Psusennes’s silver resting place was found within a pink granite sarcophagus, which was housed in a granite coffin. Tanis, where the body was discovered, is humid, swampy land—far from ideal for mummy preservation.

All Montet discovered of the pharaoh were bones, black dust, and his elaborate funerary items. Strangely, Psusennes recycled a sarcophagus that belonged to Merenptah, the 19th dynasty pharaoh who succeeded Ramses II. 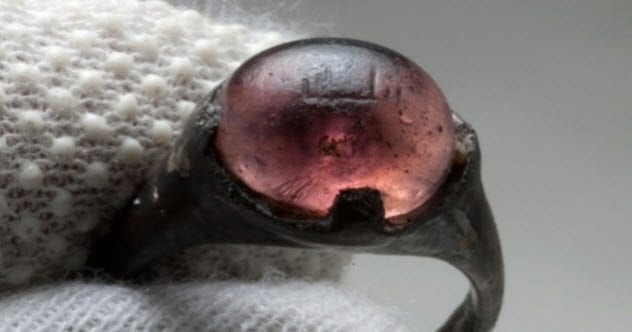 Archaeologists have discovered a mysterious Viking-era ring in Birka, Sweden. The high-grade silver alloy finger ring contains an inscription in Kufic Arabic reading “To Allah” or “For Allah.” The ring was discovered in a ninth-century grave of a woman. The burial contained exotic items from India, the Caucasus, and Yemen.

Experts believe that the ring was a signet to stamp official documents. This enigmatic find suggests direct cultural contact between the ancient Scandinavian and Muslim worlds.

Around 1,000 years ago, Arabic writer Ahmad ibn Fadlin recorded his rare encounter with Vikings around the Caspian Sea. While he noted that “[he had] never seen more perfect physiques than theirs,” he also thought that they were “the filthiest of all of Allah’s creatures.”

The recent discovery of two 3,400-year-old Egyptian glass beads in an ancient Danish grave suggests contact between Scandinavia and the Mediterranean going back millennia. 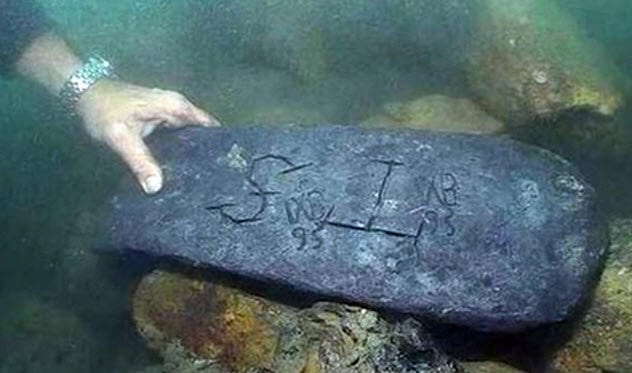 A UK–US archaeological team recently discovered a mysterious 55-kilogram (120 lb) bar of silver in the shallows off Sainte Marie Island in Madagascar. The find might have belonged to the infamous Scottish pirate Captain Kidd.

The team was led by Barry Clifford, who previously discovered remnants of Kidd’s ship, Adventure Galley. In 2000, Clifford found a metal oarlock, Ming porcelain, and 300-year-old bottles of rum. He believes that the silver bar is part of the same wreck.

Enigmatic engravings cloak the silver. The letters “T” and “S” appear prominently along with smaller numerical carvings. Kidd was a privateer in the Caribbean for years before he turned to the more profitable trade of piracy.

When Kidd was captured in Boston in 1699, the jewels in his ship were valued at nearly $10 million in 2015 dollars. Kidd met his fate on the gallows in 1701. The remainder of his treasure was never found. 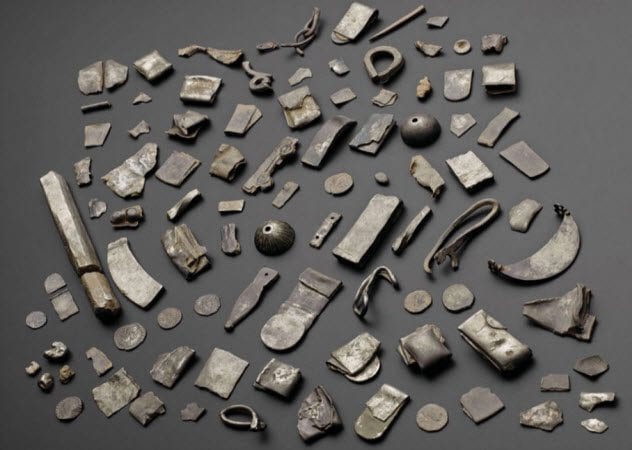 Nearly 200 years ago, Scottish workers discovered three silver objects in a remote field. Instead of exploring further, they followed orders and converted the area to farmland.

In 2013, archaeologists returned and discovered 100 silver objects dating to the fourth or fifth century. The Gaulcross hoard includes Roman-era coins, broaches, and bracelets. Although the research team wanted to reexamine the context of the initial find, they had no idea they would unearth a treasure.

The Gaulcross hoard contains high-status objects that belonged to society’s elites. During the Roman period, silver was not mined in Scotland and had to be imported. Roman silver was often recast.

Experts believe that the ancient Picts came across the hoard through looting, trade, bribes, or military pay. The trove contains silver ingots, which were used as currency at the time. The Gaulcross hoard reflects a melting pot of cultural influences that swirled in late and post-Roman Britain. 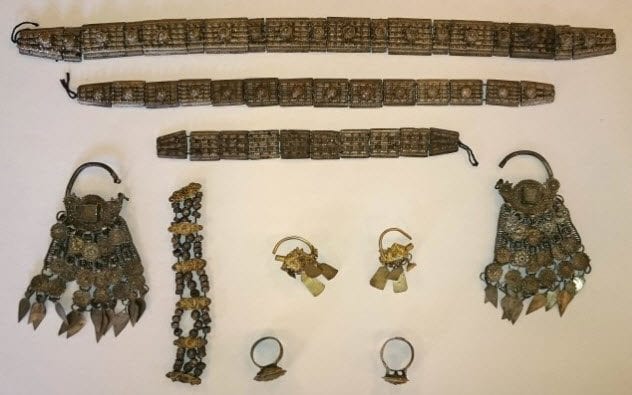 In the Bulgarian city of Montana, archaeologists recently discovered a mysterious silver hoard. They believe that the 12 items were secreted away by Catholics during the bloody 17th-century Chiprovtsi Uprising against the Ottomans.

The trove contained a tiara, two forehead ornaments, two finger rings, and a connecting piece. All the items are made of silver. Some experts believe that this was a family fortune. The hoard was initially buried in a leather pouch, most of which deteriorated over the centuries.

The 17th-century Bulgarian Catholic uprising broke out during the Great Turkish War. The struggle ended in 1688 when Ottoman forces from Sofia crushed the rebels. The final battle happened in Montana, where the hoard was discovered.

The conquerors slaughtered most of the population and enslaved the rest. Many Roman Catholics and Orthodox Bulgarians fled across the Danube and found refuge in Wallachia. 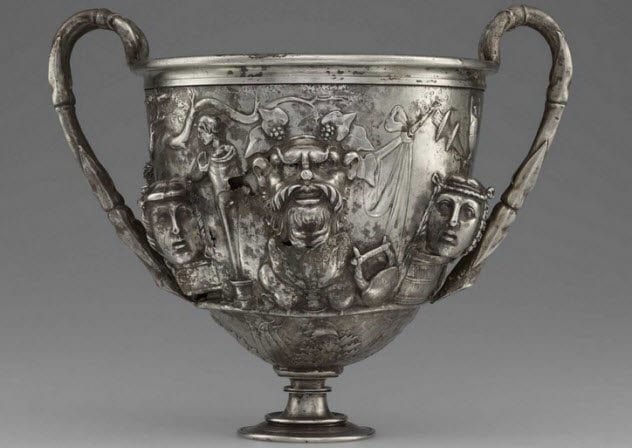 In 1830, a mysterious hoard was discovered in Berthouville. It contains some of the finest Roman silver work of the first and second centuries AD. Many of the 93 items are practical, like bowls, jugs, and cups.

However, some are more impressive, like a phiale—an ornate drinking vessel from which ritual offerings were made. The hoard also contains two statues. One is a bust of the goddess Maia. The other is a complete statuette of Mercury.

Julius Caesar identified Mercury as the principal deity of Gaul. Inscriptions on centaur-emblazoned silver cups and a pair of silver wine jugs reveal that they were owned by Quintus Domitius Tutus.

Hidden along the side of an old road, a Polish forest ranger discovered two clay pots containing over 6,000 silver coins. Dated to the 16th and 17th centuries, the currency was in relatively good condition.

Most showed tarnishing, and some were stuck together. The newest coin in the hoard came from 1612; the oldest, 1516. Who the coins belonged to and why they were buried remains a mystery.

This was not Poland’s largest silver hoard. In 1987, the 12th-century Glogow hoard was discovered during construction. This staggering collection contains over 20,000 silver coins, silver discs, seven bars of silver, and one silver nugget.

Several previously unknown coins have been found in the collection. Experts believe that “a few thousand” coins were stolen before archaeologists arrived. The stolen coins were auctioned in Cologne, Munich, Warsaw, and Gdansk. 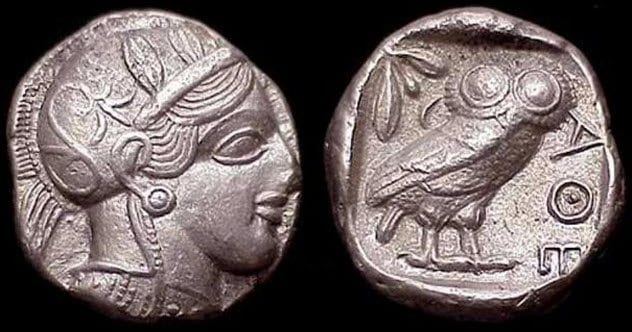 According to ancient scribes, Athenians stored vast wealth atop the Acropolis, but they never revealed the exact location. A Canadian research team led by Spencer Pope thinks that the Parthenon was the most likely a vault.

This ancient temple to Athena was secured by Hellenistic spirituality. Theft would have been considered a crime against the goddess herself, and Athena was infamous for her wrath against transgressors.

Athens mined silver locally and stored most of its currency in this precious metal. They also attained vast stores of silver from city-states that paid naval tribute. Pope theorizes that one million silver coins were once housed in the Parthenon’s attic. 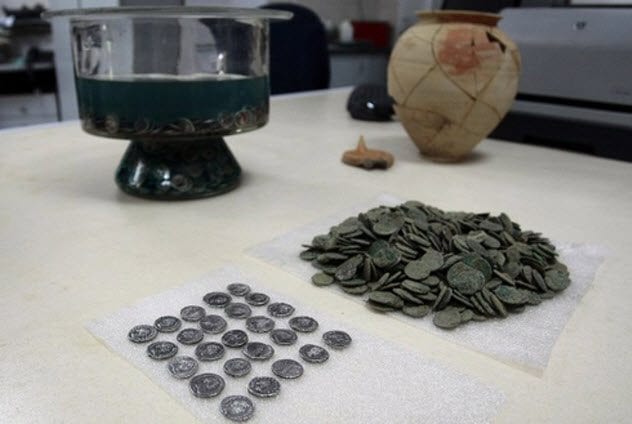 Archaeologists discovered an ancient clay lamp containing a hoard of 2,976 Roman silver coins in Bulgaria. The coins spanned a period of 100 years and depicted royal family members from the reign of Vespasian (69–79 AD) to Emperor Commodus (177–192 AD).

The trove was discovered in a layer dating between the third and fifth centuries. The lamp that held the treasure bore an inscription of its owner’s name: Selvius Calistus, a Roman citizen with a Greek surname.

The coins were discovered during excavations of Serdica, the precursor to modern Sofia. Traces of habitation in the area date back 5,000 years. The name “Serdica” derives from a tribe of Thracians known as the “serdi” who moved in during the Bronze Age.

The territory fell to Philip II of Macedonia in the fourth century BC. The Romans took it in 29 BC. Huns leveled the city in 447 AD. 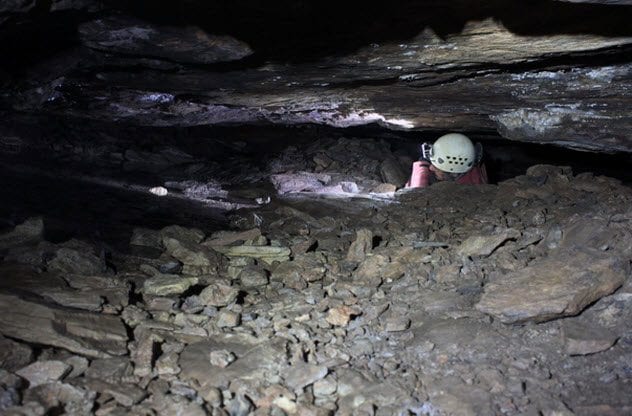 The ancient Greek town of Thorikos was home to a vast labyrinth of silver mines. Evidence of pottery and stone hammers trace mining at the site to 3200 BC.

Located at the foot of the Thorikos Acropolis, the mine’s chambers, shafts, and galleries stretch 5 kilometers (3 mi). Many of the passages are no taller than 30 centimeters (12 in). Experts believe that slaves did the brutal work of extracting the precious silver ore from hard bedrock in the smothering heat.

After the Peloponnesian War (431–404 BC), historians believe that the region was depopulated. Inhabitants turned to silver mining around 300 BC. At the time, Athens dominated the trade. The powerful city-state held 294 mining leases in the region.

The mines became exhausted, and Roman general Sulla leveled Thorikos in 86 BC. During the Roman era, it was slowly repopulated before it was taken by the Slavs in the sixth century and abandoned for good.