In Nazi Germany, Hollywood movies were banned and over 1,200 new films were created. The majority of these films were used as tools of propaganda. While many of them are over-the-top and easy to dismiss in modern times, a handful of movies were so well-made that they are still considered dangerous to the public.

Even today, 40 of these films are banned from being shown on TV or released on DVD by the German government. Unfortunately, a handful had significant influence over the citizens of the Third Reich.

10 Triumph Of The Will

This documentary film recorded the events and speeches of the Nazi Congress of Nuremberg in 1934. As with his book, Mein Kampf, Adolf Hitler used this film to spread his ideas to the public.

The movie shows giant crowds of cheering people, parades, firework displays, and signs of power and abundance. Throughout the film, there are messages of hope for the future that Germany’s failed economy will recover under Hitler’s reign.

In Hitler’s speeches, he promises that there will no longer be a class system and that all obedient, brave Germans will be taken care of. They are told that they can create their own “perfect” German society as long as they stand together.

While many people take the footage as historic fact, scholars have argued that many of the scenes could have been fictitious. Much like reality TV shows, many scenes in the movie were rehearsed and reshot rather than recorded as events happened organically.

This film was loosely based on a true story from the 1700s. As a new duke, Karl Alexander of Wurttemberg appoints a Jewish banker, Joseph Oppenheimer, to advise him on financial affairs. When Oppenheimer raises taxes for German citizens, both men get rich. The duke rewards Oppenheimer by allowing Jews into the town, so they migrate in large numbers.

As Oppenheimer conspires with a rabbi, the two of them repeatedly say that they are trying to take over Germany in the name of Israel. A young married couple falls victim to Oppenheimer. The husband is tortured, the wife is raped, and her husband eventually fishes her dead body out of the river. The Jewish people in the town are forced to leave, and Oppenheimer is executed.

In reality, the records of Joseph Oppenheimer’s death recorded his “abusing good fortune” and giving “bad counsel.” In modern terms, we call it fraud and embezzlement.

This movie took the story of one greedy individual and inflated his evil to the level of a terrorist and rapist, using him to represent Jewish people as a whole. The last line of the film gives a chilling warning to the audience: Never trust the Jews, or this will happen to your town. 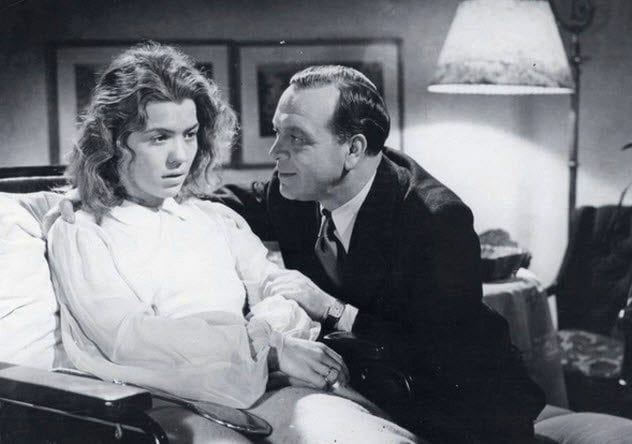 In 1941, Ich Klage An, or I Accuse, succeeded in convincing thousands of Germans to agree with the Nazi’s T4 program, which mandated the mass execution of people with terminal illnesses and disabilities.

The story centers around a beautiful young woman who is married to a doctor who is finally moving up in his career. She is sweet, cheerful, and the perfect example of a German housewife. Tragedy strikes the couple when she is diagnosed with multiple sclerosis.

After suffering bouts of unbearable pain, she begs her husband to give her a lethal injection so that she can end her suffering and die before she becomes a burden on his life. He agrees to kill her, and the rest of the movie debates whether assisted suicide should be legal.

The Nazis used this debate to divert attention from the fact that they were killing people with mental and physical disabilities without the patients’ consent. The Nazis did not want the public to believe that disabilities could be overcome and that people could live happy, productive lives despite their handicaps.

In 1939, Hitler publicly announced the invasion of Poland to rescue the “abused German people.” This film was created to show the German people his fictional story that justified his actions.

In the film, German immigrants in Poland are depicted as an abused minority. Their homes and schools are taken over by the Polish police, they are highly taxed and refused care at hospitals, and many characters are beaten and stoned to death.

Later on, German people are rounded up, crammed into cages, and forced into inhumane conditions. The captured Germans cry and sing, wishing they could be back in their homeland. Eventually, German soldiers invade and save the prisoners so they can return home.

The events in this movie are complete works of fiction, and yet they are presented as historic fact. Homecoming is still banned from German TV because a young person may watch the movie and develop a negative view of Polish people or falsely believe that the invasion of Poland was justified.

In this movie, a sweet boy named Heini, nicknamed “Quex” or “Quicksilver,” is being beaten by his Communist father and struggles to survive. Heini meets Nazi boys his own age. They are kind to him, and he finally feels as though he belongs to a sort of family.

Heini overhears his parents’ Communist friends planning to blow up a Nazi building with dynamite, and he calls ahead to save the Nazis’ lives. Completely crushed by her son’s betrayal, Heini’s mother waits until he falls asleep and tries to kill them both by filling the house with gas.

Although his mother dies, Heini survives, only to be chased down later and stabbed to death by a mob of Communists. His Hitler Youth friends are too late to save him, but they hear his last words—the lyrics to a Nazi song.

The message of the film was that Nazism was the new order and the answer to Communist Germany’s problems.

Made in 1942, The Great Love was the story of a German army lieutenant named Paul who falls in love with a famous singer named Hanna. When Paul has to return to war, Hanna sings a soul-crushing love ballad, “Ich Weiss es Wird Einmal ein Wunder Geschehen,” a song of being separated from the love of your life. It quickly became an internationally famous song.

While it may seem like a love story, The Great Love was considered Nazi propaganda because its goal was to show German women that sacrifices must be made for the good of the Third Reich.

The Great Love was the highest-grossing film in the history of Nazi Germany. It was eventually removed from the banned movie list as part of an effort to denazify films. It became available for public release in 1963 after editing out the Nazi symbols.

Made in 1940, this movie tells the story of how the Rothschild family made their fortune in the 1800s. They steal money and then lie to manipulate the stock market to make even more. At one point in the movie, one of the Rothschilds says, “We can make a lot of money but only if there is a lot of blood.”

They eventually become millionaires by benefiting from the misfortune of others. This movie is very loosely “based on a true story,” only it paints the family in the most negative light possible.

The movie ends with the Rothschilds sending members of their family to various major cities in Europe, with the Star of David representing the points on a map. A common theme in anti-Jewish Nazi films was the fearmongering that Jews were using their financial success as a way to take over all of Europe.

This movie takes place in South Africa in the Orange Free State where the Boers (people of German and Dutch descent) lived. England starts a war with the Boers. While the men are at war, the women are gathered into concentration camps. England also enlists native African people to fight with them against the Boers.

As shown in the video clip above, a German woman tries to speak out and she is shot by English soldiers. Then the soldiers turn on the crowd of civilians, chasing and shooting women at random. A second woman carrying a baby falls to the ground, with no one left to help her children.

Although England did colonize many parts of Africa and took on slaves, this film takes British cruelty and ruthless tactics to gain power to a whole new level. The events of this movie were complete works of fiction but portrayed as historic fact.

The film was shown to German audiences to prepare them for the upcoming war with England. This was the first Nazi propaganda film to receive the “Film of the Nation” award.

This film is one of the most direct, over-the-top, anti-Semitic documentaries ever made. Even Joseph Goebbels, the Minister of Propaganda for the Nazis, called the original cut of the movie “too pushy” and knew that audiences would not believe all the negative things said about the Jewish people.

In this documentary, Jews are compared to swarms of rats that are going to take over cities if left unchecked. They are described as the “demon behind the corruption of mankind.”

Footage was taken in Polish ghettos where Jews were forced to live in unsanitary conditions. Yet the movie claims that the Jews hoarded their money and lived that way by choice. The aim of the movie was to paint Jewish people as dirty, uncivilized, lazy, untrustworthy, overzealous, and plotting to take over the world.

Although many Nazi propaganda films can’t be found with English subtitles, this movie actually comes with an English voice-over on YouTube because it is still circulated as neo-Nazi propaganda to this very day.

The main character is a soldier who has become “shell-shocked”—in modern terms, has post-traumatic stress disorder—from his experiences in the war. He goes back to Germany, watches an opera, and gets over his woes once he remembers his deep love for his country.

At the end of the movie, the soldier actually laughs about how much “fun” it was to bomb the enemy and seems to be happy to return to war. In the final scene, the German pilots are flying off to bomb England and they are all singing together.

The film’s purpose was to convince the public that an individual’s emotions are not as important as the entire country and sacrificing one’s self to the Nazi Party. The public was encouraged to be blindly obedient to the orders they were given, even to the point of being convinced to somehow enjoy what they were doing.