Secret documents, CIA weapons, Enigma machines, treasure, and a vast fortune in art are only some of the secret caches investigators and explorers have uncovered in the United States, Spain, Libya, and Germany. Other such caches, of survival supplies, explosives, tools, correspondence, and even missiles, have been found in Australia, Syria, and elsewhere. These 10 recently discovered secret caches remind us of the marvelous, mysterious, and dangerous world in which we make our home. 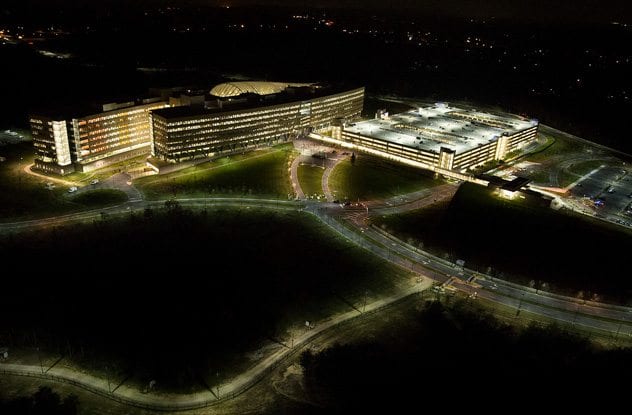 An investigation by the FBI of 67-year-old Robert Harwin, an analyst with the National Geospatial-Intelligence Agency (NGA), “which creates maps and interprets images from satellites and drones,” led to agents’ discovery of a cache of classified and secret documents and computer discs.

Harwin, who had top-secret clearance, lives in Maryland. One of Harwin’s colleagues informed the FBI that Harwin had carried “a heavy plastic bag out of NGA facilities” in Springfield, Virginia, on several occasions. According to Harwin, he’d taken the materials home “accidentally,” returning them “the next day.”

FBI surveillance showed Harwin transferring a bag from his house to his Toyota’s rear seat. Obtaining a search warrant, FBI agents “raided Harwin’s home and removed a wide array of secret and top-secret documents and other classified material” from his house and NGA documents from his pickup truck. Harwin explained the cache by saying he’s a “hoarder.” 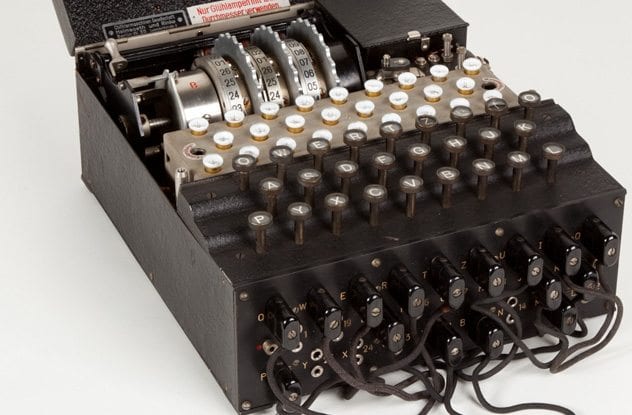 In October 2008, El Pais, a Spanish newspaper, located 26 Enigma cipher machines in a cache kept in a “‘gloomy office’ in the army’s main headquarters in Madrid.” During the Spanish civil war, Francisco Franco regarded the German-manufactured and supplied Enigma machine as his “secret weapon” in his Nationalist troops’ battle against Republican forces.

Adolf Hitler had agreed to support Franco, supplying the Spanish dictator with Franco’s first 10 Enigma machines. However, the machines were “commercial ‘D’ models,” which were inferior to the machines used by Germany itself. It seems Hitler and his high command feared the better-quality Enigma machines might be captured by Franco’s enemies, had they been supplied to him.

When the Enigma machines’ codes proved unbreakable, Franco acquired more of them. The Nationalist Army’s Commander Antonio Sarmiento said “to give some idea of the level of security these machines offer . . . The number of possible combinations is an astounding 1,252,962,387,456.” It’s estimated Franco may have acquired as many as 50 of the machines. 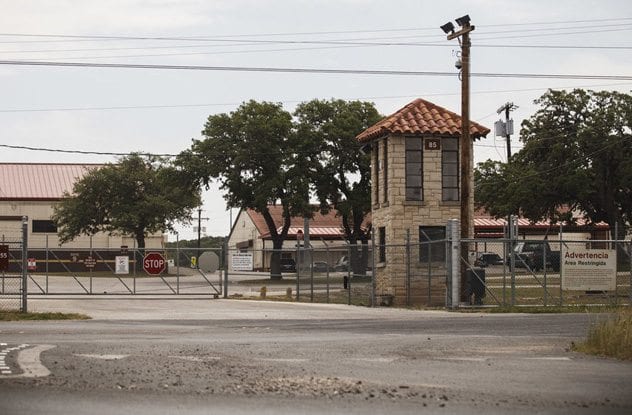 The CIA stockpiles weapons in a secret cache north of San Antonio, Texas. Its stash of weapons was used in 1961’s Bay of Pigs invasion. The CIA also distributes weapons from the cache to arm insurgents “around the world.” Although the cache has long been called the “Midwest Depot,” documents and research by former CIA analyst Allen Thomson reveal that the code phrase never referred to the cache’s “precise location” and that the “covert facility,” as Thomson calls it, has long been used for “clandestine operations.” Weapons from the secret cache were distributed to Iran during the Iran-Contra affair, to “rebel fighters in Angola and Nicaragua during the 1970s and 1980s” and to “Afghan resistance fighters battling the Soviet Union.”

The existence of the CIA’s secret weapons cache came to light in a lawsuit in which Kevin Shipp, a former CIA employee, claimed toxins stored at the secret site had made his family ill. The CIA blocked both the lawsuit and the publication of a memoir Shipp had written about the toxins and their effect on his family. 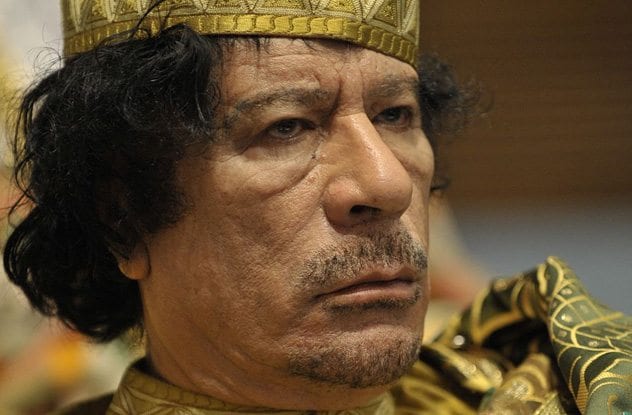 In a garden outside Sirte, Libyan soldiers found more than flowers. The garden, located in Muammar Gaddafi’s “stronghold Zanaki Kamish,” concealed a secret cache of buried treasure: gold, dollars, and euros. A local television report referred to the cache as “Gadhafi’s mafia money” because it was obtained through the killing of “thousands of Libyans.” 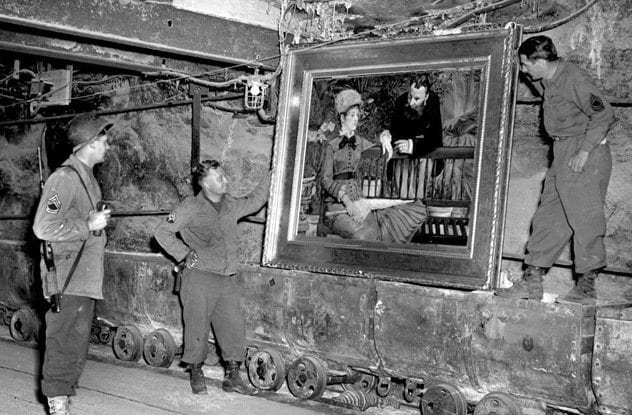 In a “routine check,” customs officials found an envelope containing £7,600 ($9,260) in cash on Gurlitt’s son Cornelius’s person, but there was no evidence of his having a source of income. Officials discovered he was selling off the “lost” collection, piece by piece, to “support his lifestyle,” and a “raid” on his son Cornelius’s Munich apartment revealed the concealed cache of art. Officials banned the press from reporting the discovery until an effort could be undertaken to locate the works’ rightful heirs. 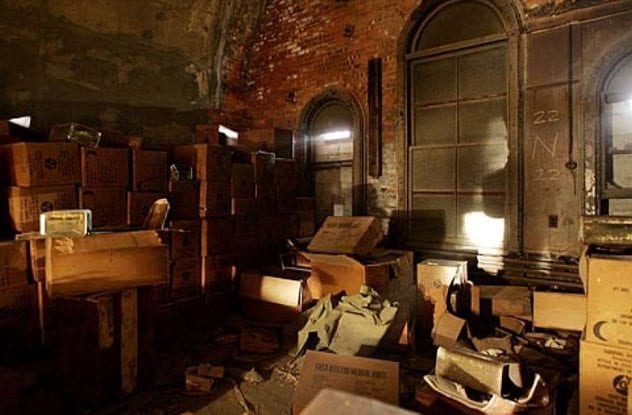 Historians were intrigued by the dates stamped on the cardboard boxes: 1957 was the year that Russia launched the Sputnik satellite, and 1962 was the year of the Cuban missile crisis. Some of the containers bear Office of Civil Defense labels. Although the site would likely not have protected people from the effects of a nuclear strike, its existence might have been psychologically “comforting,” former Assistant Secretary of Defense Graham Allison said. 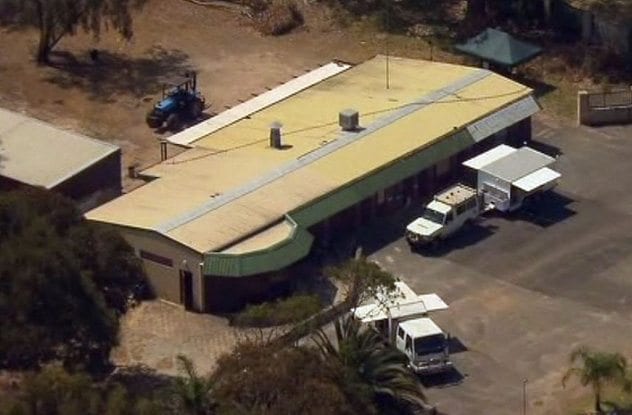 In October 2013, a secret cache of triacetone triperoxide (TATP), a high explosive favored by terrorists, was discovered in southwestern Western Australia. A citizen reported finding a bag of the white crystalline powder in the Leschenault Estuary, near Australind, 156 kilometers (97 mi) south of Perth. A joint task force of counterterrorism officers, crime squad representatives, and state security personnel investigated the discovery and searched the estuary for additional TATP.

The packages were detonated by the bomb squad, but another search turned up a third package of the explosive in a “disused caravan park,” causing the evacuation of the area while bomb technicians investigated. Police stormed a house in Bunbury, arresting a man in connection with the investigation. 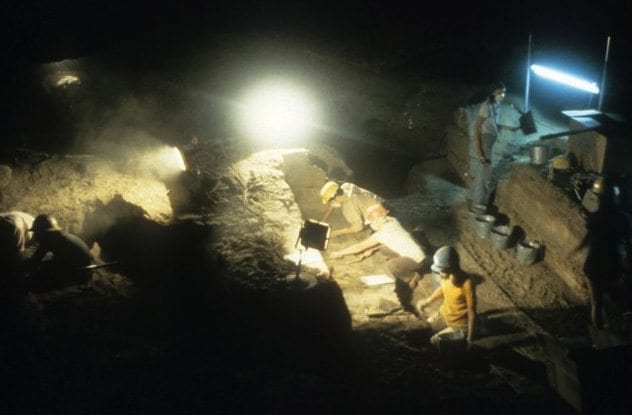 The waves of Pleistocene Lake Lahontan hollowed out Nevada’s Hidden Cave 21,000 years ago. During one of the dry periods that alternated with flooding of the cave, Native Americans explored the cave, “leaving behind a well-stratified, well-preserved record of their presence.” Their cultural artifacts and “natural deposits” accumulated within the cave until its entrance was all but “sealed off by a debris cone.” It wasn’t until the 1920s that the cave was rediscovered and “teams of archaeologists excavated” it during the 1940s, 1950s, and 1970s.

One of the explorations, during 1978 and 1979, headed by David Hurst Thomas, led to the discovery of a cache of tools used to perform a variety of tasks. “Flat, abrasive grinding stones” processed pinyon pine nuts and other “hulled crops.” Stone projectile points, found intact and functional, tipped darts and arrows. The cache ensured a surplus of tools, stored below ground, in Hidden Cave, would be available when needed. 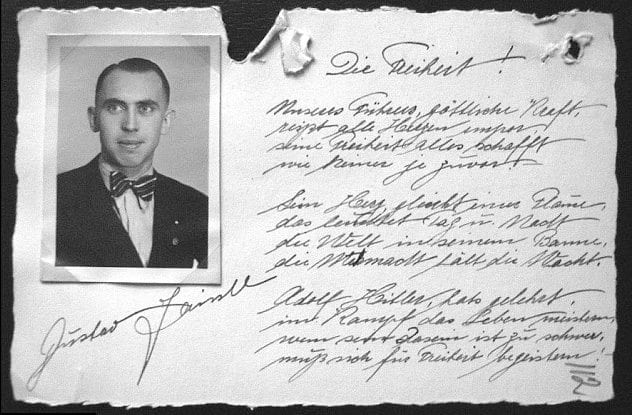 A recently discovered cache of letters written by “ordinary Germans” to Adolf Hitler, between 1925 and 1945, shows that, despite “a few dissenters,” many citizens appear to have loved their fuhrer. The Soviet Secret Police removed Hitler’s correspondence to Moscow in 1945, and the letters “were lost for decades.” However, “a large cache” of them turned up in the KGB’s Special Archive. Edited by University of Halle lecturer Henrik Eberle, Letters to Hitler “is the first volume to be published in English.”

The collection provides insights into how the German people regarded Hitler during the two decades prior to the end of World War II. In an 80-page 1930 Christmas letter, 32-year-old Elsa Walter of Karlsruhe, Germany, refers to Hitler as the “leader of the German freedom movement” and offers her services to the cause. Later, she became a “high-ranking Nazi Party official” working in Poland. Many children adored Hitler. Lotti H., a Berlin girl, referred to him as her “dear leader” and, in a poem, advised him to “rest” occasionally from his “work” and “trouble.” Susie and Daisy J., of Sudetenland, told Hitler they appreciated his freeing them and thanked him for bringing them “into your beautiful Reich.” A Ukrainian archbishop, a German Evangelical Church clergyman, and other religious leaders sent telegrams supporting his crusade against “godless” Bolshevism. 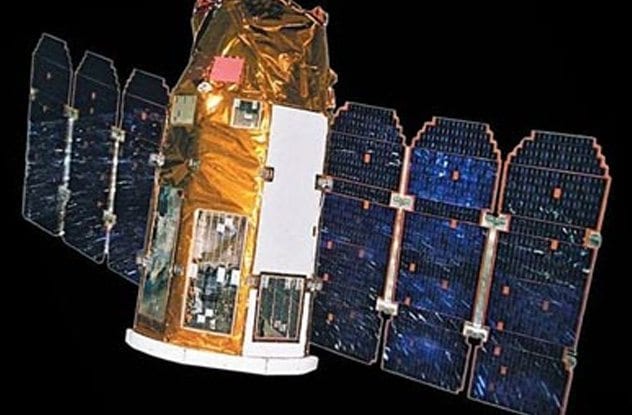 An Israeli spy satellite confirmed Western intelligence analysts’ belief that Russia has been supplying Syria with missiles. The weapons are “stockpiled” in secret caches in Syria. Israel’s Eros-B satellite photographed clear images of the missiles on trucks inside a Latakian army base. Before the satellite photographed them, evidence of the missiles’ presence had been scant, because the weapons were concealed in secret caches. The “highly accurate” mobile short-range ballistic missiles’ range is 500 kilometers, and they can carry nuclear warheads. The weapons have aided Russia in its support of Syrian President Bashar Assad against insurgents dedicated to his overthrow.

Gary Pullman lives south of Area 51, which, according to his family and friends, explains “a lot.” His 2016 urban fantasy novel, A Whole World Full of Hurt, was published by The Wild Rose Press. An instructor at the University of Nevada, Las Vegas, he writes several blogs, including “Chillers and Thrillers: A Blog on the Theory and Practice of Writing Horror Fiction” and Nightmare Novels and Other tales of Terror.