The word “sarcophagus” derives from the Greek word for “flesh-eater.” These stone burial boxes were employed for millennia in ancient Egypt, the Hellenistic world, and the Roman Empire. Their use even continued into the Christian era, when they became a medium for religious iconography. These upper-class coffins are typically ornately adorned—not only with depictions of the deceased but images of their hopes, dreams, and fears. These images often reflect societal and spiritual ideals, along with cross-cultural stylistic influences. 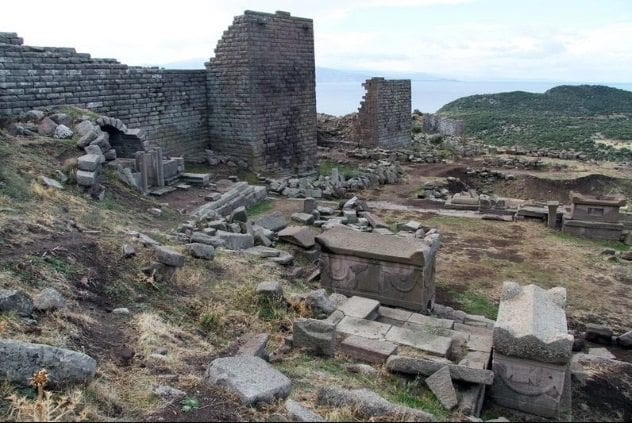 The ancient Turkish city of Assos is famed for its mysterious, flesh-eating sarcophagi. It typically takes between 50 and 200 years for a body to decompose, but the Assos sarcophagi can completely disintegrate a corpse within 40 days. These man-eating coffins are composed of andesite stone. Researchers are uncertain whether the stone itself is responsible for the rapid decomposition. Others suggest the presence of aluminum may be the cause.

The flesh-eating coffins of Assos were originally called sarko fagos, which translates to “flesh-eater” in Greek and is the basis of the modern word “sarcophagus.” The Assos necropolis dates to the seventh century BC, with the first sarcophagus appearing two centuries later. The early burials were unadorned, with flat covers and cubic stone blocks bearing the deceased’s name. Roman-era sarcophagi became more elaborate, with elegant carvings and inscriptions to indicate who was contained within. 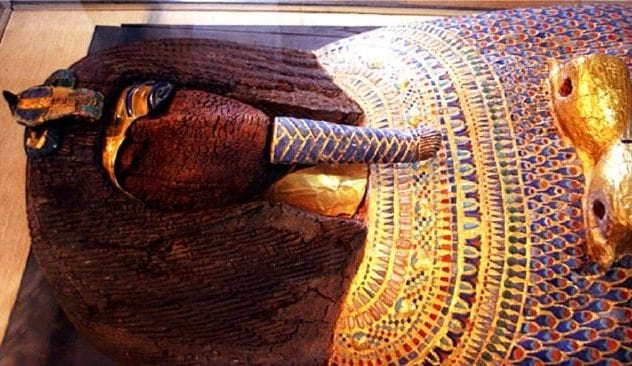 In 1907, archaeologists discovered a mysterious sarcophagus in Tomb KV55 in Egypt’s Valley of the Kings. To this day, the identity of its inhabitant remains a mystery. Within the tomb, researchers found four canopic jars, a gilded shrine, furniture, and a single sarcophagus. The coffin had been desecrated. Someone ripped off the decorative face mask and chiseled away its owner’s name.

Some believe the sarcophagus belonged to Queen Tiye. Others insist it is King Smenkhkare. The prevailing theory is that it is the final resting place of Akhenaten. Researchers recently stumbled upon a long-forgotten box from the Egyptian Museum in Cairo. It contains 500 golden sheets, skull fragments, and a note in French, indicating that the gold was discovered in a sarcophagus within KV55. Most believe that sarcophagus is the mystery one. The four alabaster canopic jars are empty but contain effigies of women believed to have been Akhenaten’s daughters. 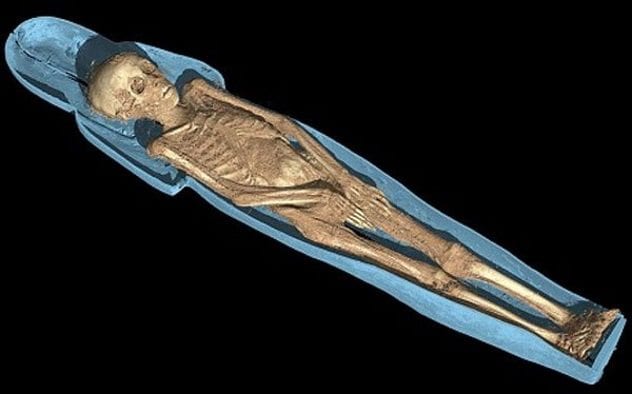 Photo credit: Trustees of the British Museum via The Daily Telegraph

In 1888, the British Museum purchased a sarcophagus containing the remains of an ancient child star. Seven-year-old Tjayasetimu was a member of the royal choir of ancient Egypt. Standing just 122 centimeters (4’0″), she was wrapped in painted bandages, and her face was covered with a veil and golden mask before burial. Researchers have employed computerized tomography to investigate what lies under the bandages.

Researchers were able to see her adult teeth pushing behind her baby teeth as well as shoulder-length hair. Experts believe the singer likely died of a rapid illness, like cholera. Tjayasetimu was too small for her sarcophagus, which might indicate a hasty burial. Hieroglyphics and paintings on the coffin reveal that Tjayasetimu was a “singer of the interior,” suggesting that she had an elite role in the choir of the Temple of Amun. The young musician was important enough to merit a burial befitting royalty and ancient Egypt’s wealthiest families. 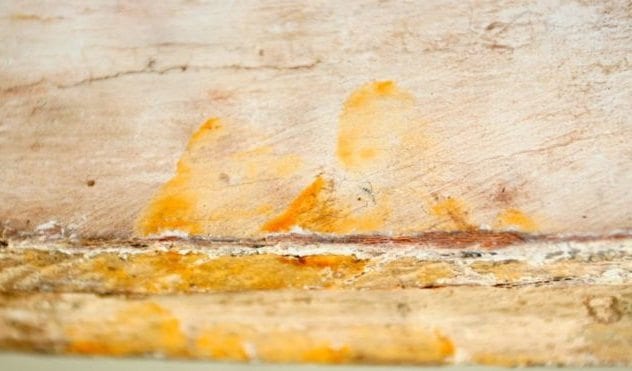 In 2005, researchers at the Fitzwilliam Museum in Cambridge discovered ancient fingerprints on a 3,000-year-old sarcophagus lid. Experts believe these prints belong to the coffin’s craftsman, who would have handled the lid before the varnish dried. Dated to around 923 BC, the sarcophagus belonged to an ancient Egyptian priest named Nespawershefyt. Although the fingerprints were discovered in 2005, they were only announced in 2016 in preparation for Death on the Nile, an exhibit chronicling 4,000 years of Egyptian coffin design.

The oldest Egyptian fingerprints found so far date to 1300 BC and were discovered in a preserved loaf of bread from a tomb in Thebes. The oldest human fingerprints known belong to child who handled a ceramic statuette in what is now the Czech Republic around 26,000 years ago. However, prehuman fingerprints go back much further. Archaeologists discovered an 80,000-year-old Neanderthal print on a weapon-making tool in Neu Konigsaue, Germany. 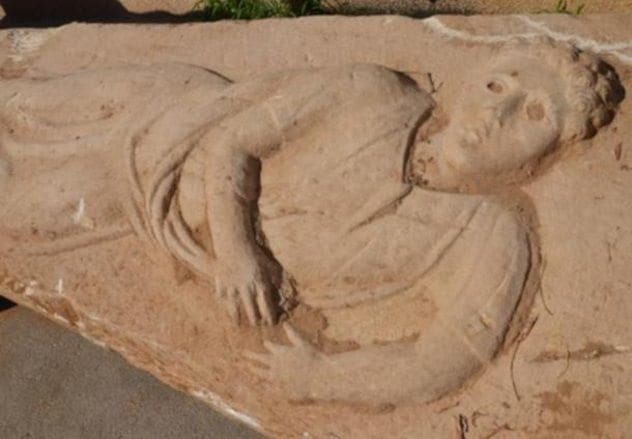 In 2015, the Israeli Antiquities Authority reported that they had acquired an 1,800-year-old sarcophagus after construction workers hid it. The 2.4-meter (8 ft), 2-ton limestone coffin suffered damage from the builders’ manhandling. The sarcophagus design contains a gorgon head, cupids, bulls’ heads, floral arrangements, and an image of young man. Experts believe the man depicted is the deceased. He is depicted with a short-sleeve, embroidered shirt and curly hair, in typical Roman fashion.

Dated to around the third century AD, the sarcophagus was found at Ashkelon. The ancient city’s population was a gumbo of Jews, Samaritans, and pagan Romans, all of whom influenced the sarcophagus’s design. Experts believe the sarcophagus was hidden to prevent delays in the building schedule. Representatives of the Antiquities Authority have referred to the coffin as “one of the rarest sarcophagi ever discovered in Israel.” 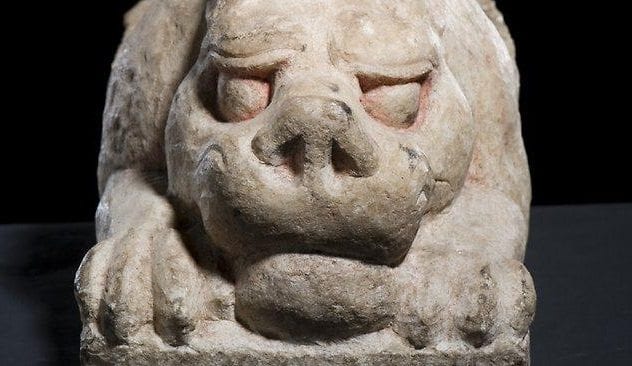 Photo via The Australian

In 1999, archaeologists discovered a white, marble sarcophagus reflecting the extent of cross-cultural interaction along the ancient Silk Road. Located in China’s Shanxi province, the coffin belonged to Yu Hong and his wife, who were interred between AD 592 and 598. The sarcophagus resembles a Chinese-roofed house. Its panels weigh 4,200 kilograms (9,259 lb) and rest on lions. Hybrid bird-men flank a fire altar in Zoroastrianism-inspired panels right next to Buddhist imagery of lotus blossoms and cross-legged meditating figures.

Yu Hong was a sixth-century Central Asian diplomat. DNA tests revealed he was Caucasian, leading some speculate that he was Sogdian, a Central Asian culture of merchants, musicians, and entertainers. Based on the presence of Tang-era coins, archaeologists believe the tomb was robbed sometime between 618 and 906. Some claim the thieves were “careless.” However, it’s possible they left the coins as part of a grave robber superstition. 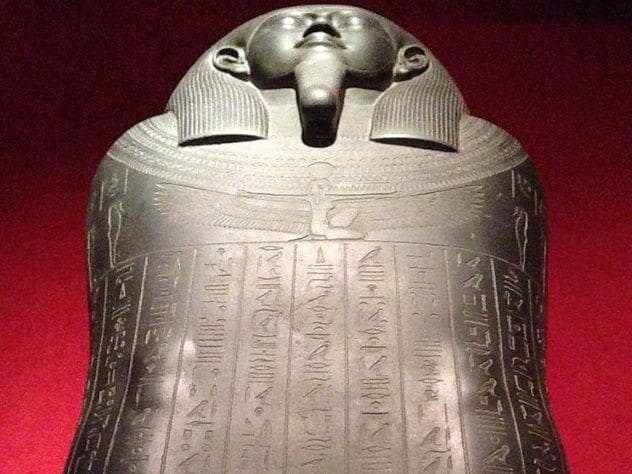 In 1887, a minister from the US discovered a sarcophagus that is considered to be one of the most fascinating artifacts of the enigmatic Phoenician culture. Dated to the fifth century BC, the sarcophagus held Tabnit, a priest of Astarte and ruler of Sidon. The coffin contained an oily, brown liquid, which preserved Tabnit’s remains. Only his extremities, like his lips, nose, and throat, had decayed. An autopsy revealed that Tabnit died around age 50 from smallpox.

A mysterious blend of hieroglyphics and Phoenician script cloak the Tabnit sarcophagus. This short-lived hybrid script developed around the fifth century BC and attests to the connection between Egypt and their northern neighbors. When Tabnit was initially displayed, his remains were exposed to sunlight, which caused rapid decomposition. Today, only his bones remain. The discovery of the sarcophagus and its removal to the British Museum caused an international scandal and a radical reaction from the Ottomans. 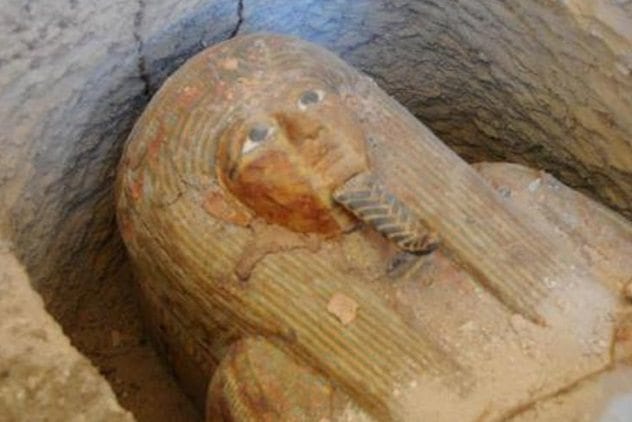 In 2015, archaeologists discovered the sarcophagus of a high priest of Amun Ra covered in mysterious, holy hieroglyphics. Unearthed on the west bank of Luxor, the coffin dates to the 22nd Dynasty (943–716 BC). The plaster-covered wooden sarcophagus was found in the tomb of Amenhotep-Huy, vizier of Nubia during the reign of Pharaoh Amenhotep III (1391–1353 BC). The deceased’s name was Ankh-f-n-khonsu. On the front of the sarcophagus, he is portrayed wearing a crown of flowers and ribbons, a necklace, and a wig with a ceremonial beard.

Being from the 22nd Dynasty, the sarcophagus is younger than the 14th-century-BC tomb that contained it. The burial chamber also contained Ankh-f-n-khonsu’s Steele of Revealing, a funerary tablet that depicts the deceased making ritual offerings dressed in the traditional leopard-skin garb of a high priest of Amun Ra. The tomb’s walls contain images of figures in Nubian attire, reflecting Amenhotep-Huy’s sphere of influence. 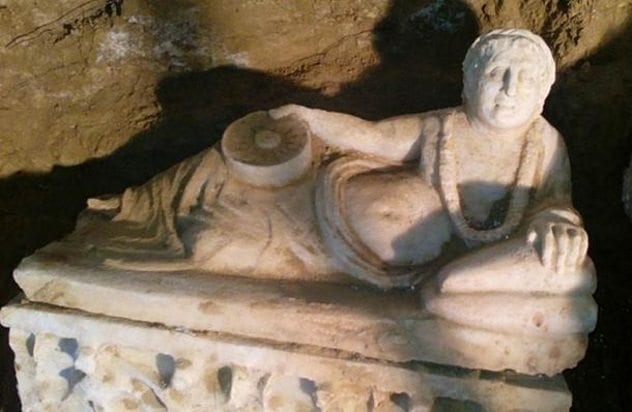 In 2015, Italian archaeologists excavating an untouched tomb discovered two sarcophagi, which shed light on the enigmatic Etruscan civilization. A farmer accidentally unearthed the 2,400-year-old tomb while plowing his field near Perugia. One sarcophagus is made of alabaster and marble and contains a male skeleton. It also bears a lengthy inscription and the name “Lars,” hinting at the deceased’s identity. The second sarcophagus is made of painted plaster. However, this fragile final resting place was shattered at some point in the past, and its secrets remain scattered among thousands of fragments.

The Etruscans flourished in Western Italy around Tuscany between 900 and 500 BC. While they introduced writing, winemaking, and roadbuilding to much of Europe, precious little is known of them. The sarcophagi are significant, since Etruscan artifacts are so rare. Researchers believe these ancient burials will provide insight into Etruscan sociopolitical organization, customs, and religious beliefs—particularly about the afterlife.

1 Mystery Of The Bearded Man 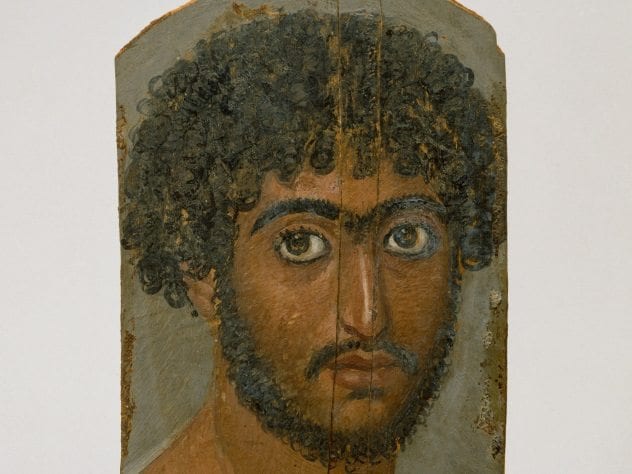 A mummy portrait attached to a Roman-Egyptian sarcophagus has tantalized archaeologists since its discovery. Dated between AD 170 and 180, this depiction of the deceased became detached from its sarcophagus and mummy long ago. The identity of the Bearded Man remains a mystery. Many have noted that he appears Byzantine. For years, his slight pout has mystified and fascinated researchers. They hope analysis of the pigment might bring them closer to the mystery man’s identity.

Roughly 900 mummy portraits have been found to date. They made their appearance beginning with the Roman occupation of Egypt in the first century AD and remained popular for about 200 years. These likenesses were painted on wooden boards and affixed to sarcophagi where the head would have been. The portraits are so naturalistic that researchers have used them to identify family members by comparing similarities. Most mummy portraits have been discovered at the acropolis of Faiyum.

Dubbed the “Indiana Jones of folk music,” Geordie McElroy has hunted spell songs, incantations, and arcane melodies for the Smithsonian, Sony Music Group, and private collectors. A leading authority in occult music, he is also singer of the LA-based band Blackwater Jukebox.