The golden age of flying is now—if you have $30,000 you can have your own personal suite for eight hours of slumber as you waft peacefully above the clouds, interrupted only by gourmet meals crafted by Michelin-starred chefs. But let’s be real, the actual golden age of flying was the early jet age when flying was a thrill, when the jet set were people to be looked up to, and when an airline ticket clutched tightly in your hand meant you were glamorous. But, was it really all it was cut out to be? Read on dear readers . . .

The only smoke-free-zone was the front rows of first class. Second class had non-smoking zones at the front, but they got second hand smoke from the smokers in first class. If you look at an aircraft, it has a port at the back where the air from inside the cabin, which is 75% port air and 25% fresh air gets recycled back to the interior. This plane’s rear end used to be brown with nicotine, because everyone smoked, and, as a consequence, the air was thick with the stuff.

Aircraft take an air bleed from one of the engines, which is air-conditioned and fed into the front of the plane. So the front part of first class (a separate cabin in those days) was clean air. Behind that was the smoking section of first class, so everyone behind got second hand smoke. Behind that was non-smoking second class, and then smoking second class. By the time you got to to the back of the fuselage, the air was so thick you couldn’t see through it.[1]

9 It Was Really Noisy

High bypass jet engines, which are a lot quieter, are a relatively recent invention. The jets that powered the VC-10, the Comet 4B, and the Boeing 707 (video above) were really noisy. A Rolls Royce engineer described the engine that powered the Comet 4B as being a device that turned expensive jet fuel into noise. Much of this was transmitted into the passenger cabin. The VC10, a very over-powered airliner, designed for short runs from hot and high runways, used to take off like a rocket, and was correspondingly noisy at the back, where all four jets were.

Modern jets are high-bypass, which means the core gas at hypersonic speeds is surrounded by a sheath of cooler, slower air, reducing the noise enormously. Hush kits reduce the noise further. The noise from one 707 take-off is equivalent in terms of noise impact to ten take-offs of a modern jet.

What didn’t help is that aircraft had to fly from relatively short runways, designed for propeller aircraft, and therefore needed enormous amounts of thrust. The 747 meant that runways got lengthened, reducing the need for overpowered (and thus noisy) planes. Planes are also tailored now towards the routes they will fly, so hot and high airports as found in much of Africa and South America, fly different aircraft. In the early days, every aircraft was expected to fly from a short, hot and high airport.

They’re called ‘hot and high’ because the air is thinner at higher altitudes, and it’s thinner still when the air is hot. So a plane taking off from Lusaka, Zambia needs nearly twice as much power as one at sea-level in temperate latitudes, like London Heathrow. Planes were designed for every condition.[2]

What It Was Like During The Golden Age Of Flying

A first class cabin on an Emirates A380 will set you back about 30,000 USD, but flying wasn’t much cheaper in the golden age. A second class seat from Paris to London would set you back £50 when an annual wage was around £2,000. No wonder flying was for the rich and glamorous. To be a member of the Jet Set meant that you had made your place in the world. Mass tourism only really came in with the Jumbo Jet, the 747, which democratized flying.

As you boarded the plane, a photographer would offer you the opportunity of having your photo taken against a background of the tail of the aircraft, displaying the company’s logo, to show that you were really a jet-setter.[3] 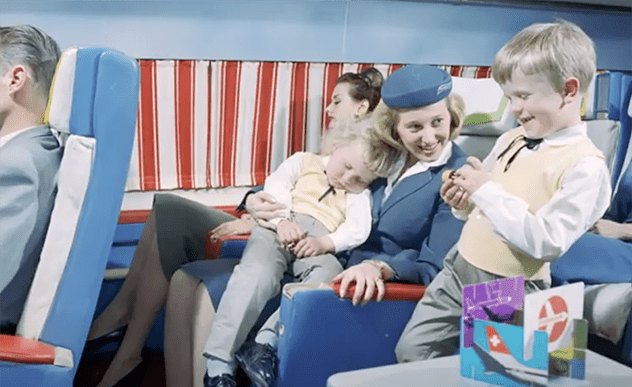 All airlines used to fly kiddies to and from their parents and boarding schools, they were called unaccompanied minors. They had special badges, and a hostess would see them through transit from one plane to another. Few airlines now offer this service, meaning that kids effectively have to be always accompanied by an adult.

Kids usually got a trip to the cockpit, free gifts like badges and decks of cards (with, of course, the airline logo on the back), and had their Junior Jet Club albums signed by the pilot. Airlines knew that their young customers helped breed brand loyalty. This category of passenger is barely tolerated these days, as they occupy a seat but pay a lower price, and as flying is commoditized they aren’t a market target any more.[4]

6 It Wasn’t That Safe

The classic aircraft of the early jet era was the Boeing 707, which outsold most other comparable jetliners combined. It has an inbuilt tendency to ‘Dutch roll’, basically wagging its tail in the air, which could develop into a dangerous instability if uncorrected. Consequently it was challenging to fly.

The first jet airliner, the Comet, suffered metal fatigue issues leading to fatal crashes. Early jet engines weren’t that reliable, either, which is why most planes had four, so the flight could still go on if a couple of them failed.

Without sophisticated avionics, such as weather radar, flights weren’t able to predict accurately what they’d be flying through. Rudimentary radar on the ground meant that mid-air collisions happened (they’re virtually unheard of now) several times.

Then there was always the risk of getting hijacked. With the cockpit always open so kids could come and have their view of it, and privileged adult passengers too, anyone could walk into the cabin and demand to be taken to Cuba.[5]

Movies? In-seat entertainment? No. The technology wasn’t up to it. Your entertainment was conversation with your fellow jet-setters, flirting with the hostesses (as flight attendants were called in those days) smoking, drinking and eating. And playing patience with a set of mini-sized BOAC playing cards, designed to fit onto the fold-down tray.

Hostesses were the in-flight entertainment. Most passengers were male, in a male-dominated era. They were not primarily considered, as they are now, as safety specialists concerned about getting people off the aircraft quickly in the event of an accident. They were expected to be female, under 32, unmarried, and sexy. Singapore Airlines still projects this image of the ‘Singapore Girl’ as being a suitable subject of lust.[6]

4 No Special Treatment In Customs

There were no air bridges in those days. After being cosseted in jet-set luxury, you’d need an umbrella at Heathrow or a fur coat at Sheremetievo because you walked out onto the tarmac and walked, sometimes a considerable distance, to the air terminal. When you got there, there was no air-conditioning or at best rudimentary heating while you went through customs and immigration. Without a Schengen Zone (passport-free European states), there was no relief from the indignities of having your baggage opened and searched, filling in immigration forms, and showing your passport. Not to mention the restrictions on the amount of money you could take abroad, and currency restrictions on how much of it you could change into foreign currency. But there were compensations.[7]

The wide aisle of the 707 meant that first-class passengers enjoyed seat-side service from the rotisserie. Pan Am early realized that they couldn’t compete with the chic airlines like Air France, so they teamed up with Maxims’s of Paris to handle their transatlantic catering. By modern standards, the food wasn’t that exotic (Tournedos Rossini turns up a lot) but the wine list is to die for. No-one seemed too concerned about people getting off the aircraft sozzled, because a typical menu for a transatlantic flight was an aperitif, two wines, and a scotch or brandy after. As many top ups as you’d care for. Of course, jet-setters wouldn’t have to worry about drinking and driving after a flight. They’d have a chauffeur for that.[8]

The ‘golden age’ of airline travel

747s and A380s have in-flight bars, for over 300 passengers, and usually restricted to first class ones. Super Constellations (one of the first luxury transatlantic airliners, though they weren’t jets) had an in-flight bar for about 48 passengers. Some 707s had in-flight bars too. So you could stay sozzled from when the ‘fasten seat belts, no smoking’ signs were turned off until they were turned back on for landing. You could even enjoy a fine cigar: the restriction of ‘cigarettes only, no pipes or cigars’ only came in when the air got too thick.[9]

This is something 2020 airlines have finally caught up with – making people feel special. From 2001 flying became a chore, to be endured as a hassled way of getting to your destination. In the golden age of flying, it was an experience – something to boast about, and show souvenirs of.

First class flying these days means that everything you might want or need is catered for from before you check in until your chauffeured limo takes you to your hotel. But how can that compare with rubbing shoulders (literally) with Marilyn Monroe or Frank Sinatra?[10]