Dogs are humanity’s best friends. From the first moment humans tempted wolves into being friendly with some scraps of food human and dog evolution has gone hand in hand. Today we have bred our best friends into an amazing range of breeds to suit any jobs that we want done for us. From sheepdogs to lapdogs there is a dog for every job – and some of those jobs are stranger than you might think.

Here are ten jobs you never knew a dog could do. 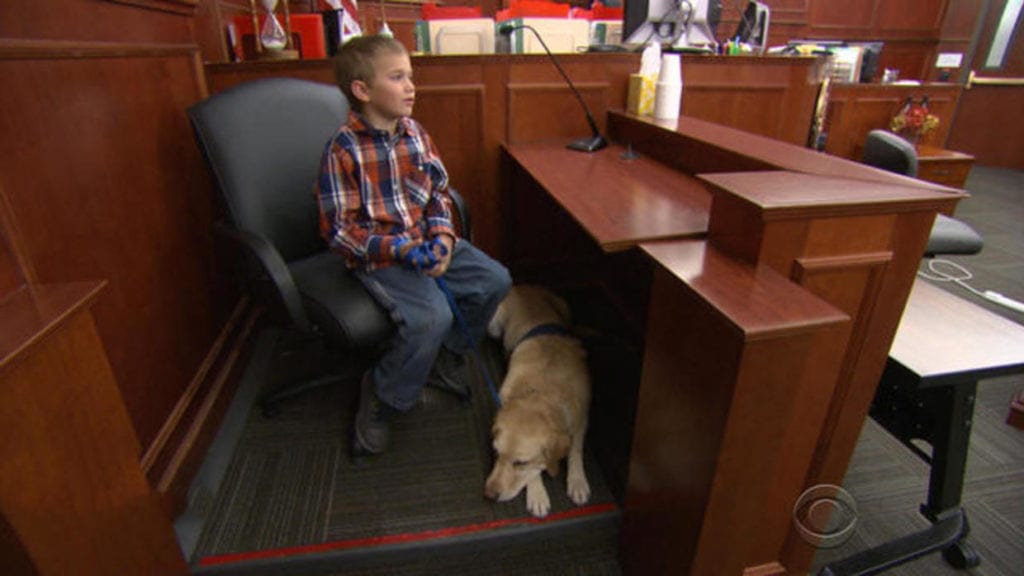 Is there anything more comforting than a dog trusting you enough to let you pet them? When they rest their head on your knee you know you have made a new friend. It’s not just a warm feeling they can provide – dogs have been employed to help the legal system function with their comforting presence.

Children who have to testify in court can find it trial due to the pressure put on them by the situation. With a judge, lawyers, and a jury all staring at them a young child can be terribly intimidated. That’s where a canine companion can come in handy. Dogs are being used to help children testify.

A trained dog can help a child right from the moment they report a crime to police until they speak in court. When in court the dog is usually concealed with the witness behind the stand. This lets them comfort the child without distracting the jury as humans will often pay more attention to a dog than the person with them.[1]

Dogs and religion are a divine combination. From St Roche, a saint who was comforted by his dog, to St Christopher, who was often depicted with a dog’s head, to St Guinefort, a dog who was made a saint, humanity’s love for dogs has often come close to worship. On a more mundane level monks and churches would often keep dogs to guard their gates. One monastery in Bolivia has decided that one dog is such a good boy that he deserves his own uniform.

Friar Carmelo is a schnauzer. Carmelo was photographed dressed in a miniature version of the monks’ own habit taken from a puppet used to amuse children. Since then the canine friar has become a social media darling. His internet fans have dubbed him Friar Moustache for his distinctive facial hair.

While the official belief of Catholics is that animals cannot get into heaven because they lack eternal souls (their souls die with their bodies) some popes have left the Pearly Gates a little ajar for our animal friends. Pope Paul VI told one boy whose dog had died that “One day, we will see our animals again in the eternity of Christ. Paradise is open to all of God’s creatures.”[2]

Truffles are one of the most valuable foodstuffs on the planet. Because of their symbiotic relationship with trees and their complex life cycle it is not possible for us to farm truffles. If we want their rich flavour in our food we have to go out hunting for them – but not with our own limited noses.

Some animals have much more sensitive senses of smell than we do. Pigs are well known for their ability to snuffle out truffles under the ground, but they also have a tendency to eat the truffles they locate. Dogs are much less likely to wolf down the precious fungi. Some dogs are trained to associate the distinctive smell of truffles with pleasure mere days after their birth.

In Italy the Lagotto Romagnolo breed of dog is now associated mainly with truffle hunting. It used to be a hunting dog, and it still is – just not hunting for animals.[3]

Catching and retrieving balls is one of the most popular pastimes for our canine buddies. So why do we use boys and girls for this task during tennis matches? That was a question one Brazilian tennis tournament decided to answer. Several dogs who were taken from the streets of Sao Paulo and dressed up as ball boys and girls and let loose on the court.

The aim of the game was not to replace their human colleagues however. Because the dogs were strays it was hoped that spectators who saw the dogs would want to adopt them. In the first year all four ball dogs were adopted. Soon more strays were brought in.

The strays were not always the most obedient of court assistants. They quickly mastered getting the balls but sometimes proved unwilling to return them to players. And they were only used during warm ups – who could concentrate on a tennis match when there are dogs to look at?[4]

When we think of dogs as protectors of valuable items we tend to think of snarling guard dogs straining against their chains to ward off robbers. Riley however protects fine art from more subtle dangers. Riley the Museum Dog works at the Museum of Fine Art in Boston to detect the many pests that can threaten the conservation of artworks.

Pests as diverse as moths and rats can all destroy art in even the best run museum. Riley uses his nose to sniff them out before they can create havoc. Riley was introduced to the museum at a young age to get used to his surroundings and to train him not to damage the artworks himself.

Riley has since become a mascot for the museum and even features in his own book – The Adventures of Riley, the Museum Dog.[5]

A dog’s nose is incredibly sensitive. While humans have around 6 million receptors for smell dogs can have up to 300 million. Dogs also give over a much larger proportion of their brain to interpreting the smells they detect. It is not surprising then that dogs can sniff out things that might seem impossible for us to imagine.

Some dogs are so sensitive to changes in smell that they can tell when their owners get sick just from their odour. Other dogs can be trained to detect certain diseases in people they have never met. Daisy the dog has been trained to tell who has cancer. Having checked over 6,000 samples she has correctly identified 550 people with cancer – including her owner.

“Daisy kept nuzzling and pawing at my chest one day, which really alarmed me,” her owner said. “I got it checked out and was told I had early stage breast cancer. Fortunately I was able to have it removed but if it wasn’t for Daisy it would have gone undetected for much longer and could have been more serious.”

For her work in healthcare Daisy was awarded a Blue Cross Medal in 2014.[6]

Why are there Labrador retrievers in this zoo’s cheetah exhibit?

The health benefits of owning a dog are well known. As well as the exercise we get from playing with dogs there are dramatic mental health benefits. Loneliness and depression can both be reduced by the comforting company of a dog – and not just in humans.

Cheetahs are built for speed and sprinting on the wide plains of Africa. A small enclosure in a zoo can leave them anxious and depressed. Constantly on the lookout for larger predators they can feel threatened by the hordes of humans staring at them. A dog can make the perfect companion to calm the cheetah down.

Despite the mythical antagonism that is said to exist between cats and dogs both animals seem to enjoy being in each other’s company. The dogs offer a soothing presence and sense of companionship while the cheetahs give the dogs a playmate.[7]

Not all the jobs given to dogs are ones that are go down well on social media. In times of war humans often recruit their animals as allies. These animals can be put to work as beasts of burden, guards, or even weapons. The Anti-Tank dogs of the Soviets were designed as weapons – and single use ones at that.

The plan was to use the dogs as a way of delivering bombs to the vulnerable underside of enemy tanks. At first the dogs were trained to release their bombs when they arrived but in the chaos of battle this proved to be too much for the dogs. They often returned to their handlers with a live and dangerous bob still strapped to their back. Next the dogs were fitted with bombs that detonated as soon as they brushed against the tank.

Unfortunately the Russians used their own tanks to train the dogs. The dogs thought they would find a treat under a tank and so sought out the ones they were most familiar with.

When anti-tank dogs were deployed in actual combat most were killed before they reached any tanks. Some turned back towards their trainers and had to be shot by their own side. Fortunately this is a doggy job that no good boys have to train for any more.[8]

Invasive species can completely wipe out a species and human attempts to halt the spread of such species can often backfire tragically. In one case however the results have been cute. Middle Island off the south coast of Australia is home to a colony of the world’s smallest species of penguins, but they have come under threat from foxes.

The Fairy Penguins are as petite and darling as they sound but have no natural defence against foxes. Natural changes to the coast had allowed foxes to access the island when the tide was low. When researchers checked the population of penguins on the island after foxes had got to there they found that hundreds of penguins had been killed. In two nights foxes had slaughtered 360 of the miniature birds.

It was a local chicken farmer called Swampy Marsh who came up with a solution. Used to protecting birds from murder-happy foxes he suggested using dogs to guard the penguins. In the ten years that dogs have been protecting the fairy penguins there has not been a single death from foxes.[9]

MAX, THE MAYOR OF IDYLLWILD

Even the most beloved of politicians will have their detractors. You would be hard pushed however to find anyone who hates the Mayor of Idyllwild, California – he’s a dog. Born Maximus Mighty-Dog Mueller II he has been mayor since he was just 11 weeks old.

Mayor Max is not the first dog to be named mayor of Idyllwild. His predecessor Max I died while in office and the current mayor was found after a hasty search for a replacement. The first Mayor Max won his position in a charity event against a range of other pets. Since Idyllwild is an unincorporated town it has no government of its own and Max’s position is mostly honorary.

Max II now spends his time spreading happiness to his constituents. Wearing a tie he can often be seen on weekends touring the town in the back of a pickup truck and barking to his fans. Despite an “assassination attempt” when another dog went for Max’s neck it seems his lifetime appointment will last for some time yet.[10]