Throughout history, bears have played many roles to mankind. They’ve been ruthless killers to be feared and fought. At other times, we’ve worshiped them. And sometimes we’ve just thought they were cuddly, captured them, and forced them to do tricks.

But what do we really know about them, beyond the fact that they’re furry, strong, and enjoy sleeping through the winter? Well…

9They Can Use Tools 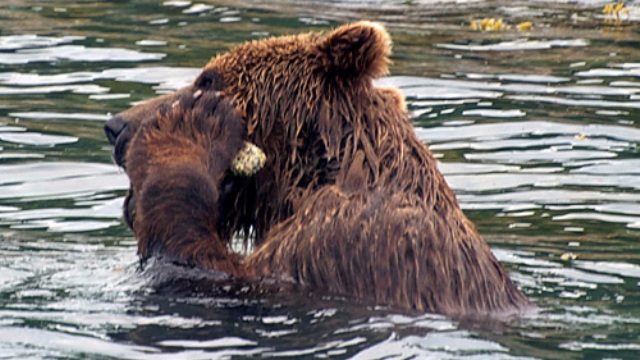 The sheer size of many bears can make them seem like lumbering brutes, but they are actually quite smart. Experts put their intelligence on par with most great apes, and some even say bears are as intelligent as three-year-old humans.

There is certainly some evidence to support the fact that bears are pretty bright and may actually be even cleverer than we previously thought. In 2012, an Alaskan brown bear was spotted using tools. The bear was holding a rock in its paw, using it to groom and scratch itself. This find puts bears in an elite group of non-primate animals capable of using tools. Other members of that group include elephants, dolphins, ravens, and whales—all famously intelligent animals. 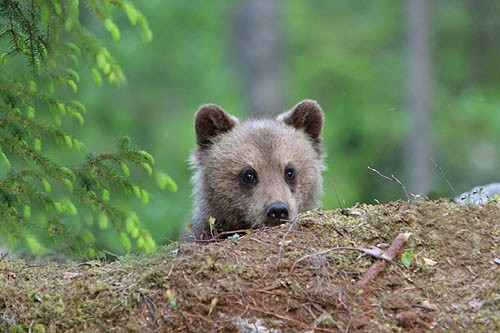 Bears are valuable in certain East Asian countries, where it is believed that the bile produced by their gallbladders has medicinal properties. The bile is believed to relieve internal heat, but it can also supposedly cure most ailments from hangover to cancer. As such, it is commonly found in all sorts of products, from food to shower gels.

This has led to the strange, cruel practice of bear farming. In these farms, scores of black bears are kept in painfully small cages, where the bile from their gallbladders is regularly harvested.

Lately, there has been some pressure by the officials to end bear farming. Still, as the bile has been used in Asian traditional medicine for millennia, the horrifying practice is unlikely to end in a hurry. 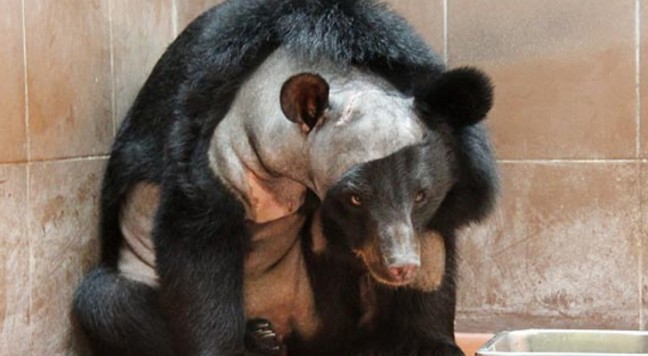 Bears can sometimes develop very similar medical problems to humans. One of these ailments is hydrocephalus, a nasty condition where liquid concentrates in the head, putting pressure on the brain. If left untreated, hydrocephalus is a one-way ticket to slow, agonizing death: It’s like a constant, piercing migraine that gets worse and worse until it kills you.

But modern technology has provided means to fix this terrifying condition, for both bears and humans. The first brain surgery on a bear was recently performedin Laos. The patient was a hydrocephalitic Asiatic black bear named Champa. The bear survived the operation with relatively little harm, save for some brain damage caused by the liquid’s pressure. After recovering from the surgery (and the humiliation caused by the partial shaving of her fur), Champa has become much more active and her relief is easily noticeable. 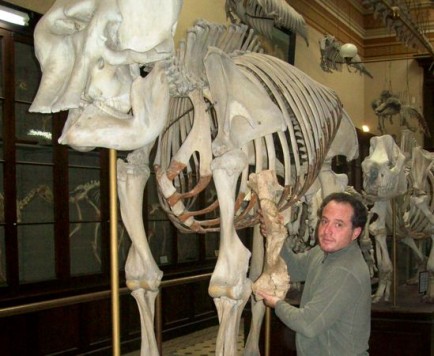 There is some debate about the largest bear in the world. Most experts say that the honor goes to the polar bear, which can weigh over 1,000 kilograms and stand up to 2.44 meters (eight feet) tall. However, some Kodiak bears (a subspecies of brown bear) can be significantly stockier than their arctic cousins: Certain specimens have been over three meters (10 ft) tall and weighed well over 1,134 kilograms. On average, though, the polar bears are larger.

Still, one bear used to be even bigger. The South American giant short-faced bear lived during the Pleistocene era. It stood 3.35 meters (11 feet) tall and weighed in at a massive 1,588 kilograms. 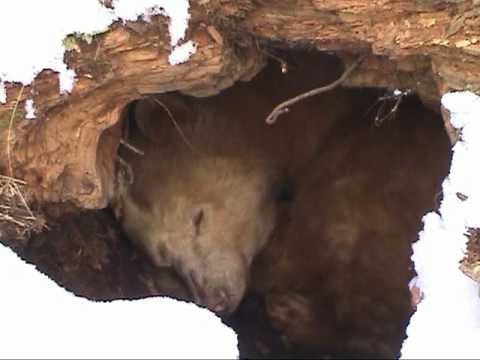 The biggest bear-related mystery has always been their ability to hibernate. For a long time, all we knew about the process was . . . well, that it happened. Scientists could not really explain how a massive animal could stuff itself with food, then suspend its own life functions for up to five months. Many small mammals (such as marmots and bats) have the ability, but a bear just seems too large to pull it off.

In 2011, science finally started cracking the case by observing five bears hibernating in a controlled environment. Up to that point, it was thought that bears conserved energy mainly by dropping their body temperature. This was found to be untrue, as it only dropped by about 6 °C. Instead, the bear’s body employs all sorts of tricks: Its breathing slows down to one or two breaths per minute, and its heart follows every breath with a quick burst of activity, at a total rate of four beats per minute. A bear’s body also kicks into a transition period a few weeks before and after the hibernation, enabling it to act normally, but with a lowered metabolism rate. During hibernation, its metabolism is only 25 percent of normal.

All of this new knowledge could someday lead to technology allowing humans to hibernate as well. That’s still a distant goal though—we still don’t know how their brain can function with so little oxygen, or how they manage to preserve their bone and muscle mass despite not moving in months.

Most bears generally live up to 30 years in captivity, and somewhat less in the wild. However, individual bears have been known to live quite a bit longer. The oldest known wild bear (a female black bear in Minnesota) lived until 36, while the oldest recorded bear is a legendary Greek bear called Andreas, who was 50 years old when he died in the Nymfaio wildlife sanctuary.

A bear’s age can be determined relatively easily, because their tooth roots form annual rings in the same way as trees. When a bear dies, a microscope analysis of its canine tooth can provide a very accurate age.

Bears have been around throughout human history, and their size, strength, and ability to walk on two feet like humans have led to healthy respect. In many cultures, this respect turned into outright worship. The practice of bear worship, also known as arctolatry, has been around since the Paleolithic age. It was most common in areas with large bear populations, such as North America, Europe, and parts of Asia.

The Sami people of Siberia both hunted bears and held them sacred. To appease the animal’s spirit, they had a special post-hunt feast ceremony to keep the bear’s angry spirit from attacking them. Many other cultures around the world had their own versions of honoring the great animal, often with a similar combination of hunting its flesh, yet respecting its spirit.

This longtime reverence for bears has left lasting marks to our culture. When you really think about it, bears are everywhere. They are a common sight in heraldry, star systems have been named in their honor, books and poems have been written about them and cities (such as Berlin and Bern, capitals of Germany and Switzerland) have them in their names and symbols. 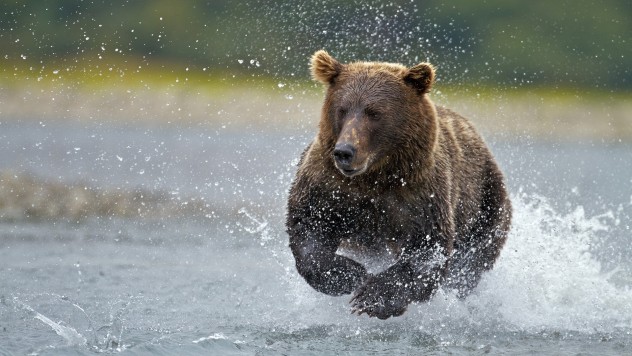 Bears may seem large and clumsy, but they are actually shockingly fast. Brown bears and grizzly bears can run at speeds approaching 48.3 kph (30 mph), and they can keep going for 400 meters (1,300 ft). If they keep a slightly more leisurely pace called “rolling lope” (that can still outdistance a horse in the wild), they can easily keep going for 3.2 kilometers (two miles). 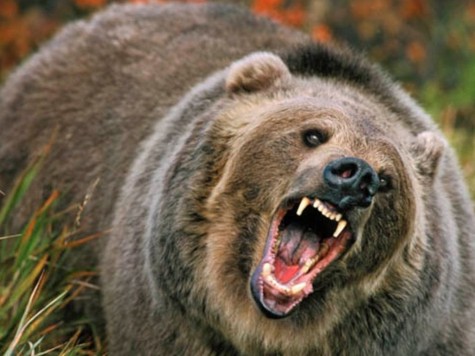 Generally speaking, bears are not keen on attacking people. To them, we’re just noisy beasts that smell weird and have strange body language. In most bear encounters, the bear is at least as creeped out as the human and is just trying to get rid of us. It’s important to understand whether the encountered bear is trying to say, “Go away, man, this is my neighborhood,” or “I have not eaten in two weeks and you look delicious.” Bears have a large personal space, and they use several “conversational” tactics to politely ask the human intruder to leave it, from a slow, curious approach to sudden, frightening feint attacks that are pulled back at the last minute. There are many online manuals that show the correct reactions to these attempts to communicate.

When a bear actually does want to fight, the situation is much worse. It usually means that the bear is frightened or provoked, or perhaps just so undernourished that even humans start to look appetizing. Attacks that end in fatalities are few and far between, but they do happen occasionally. During the last 100 years, American black bears have killed at least 63 people. Still, even hungry bears tend to dislike humans and can occasionally be deterred. In one case, a small woman chased a hungry polar bear away from her porch by smacking it with a broom. The bear ran away and never dared come back.