Times are difficult as the world bands together to fight the coronavirus pandemic, but did you know there were several near pandemics in the recent past? In fact, some of the diseases in these close calls were far deadlier than Covid-19. Had some of these diseases slipped through the grasp of healthcare workers, the results could have been far more catastrophic than Covid. Here are 10 recent near pandemics deadlier than the coronavirus.

The Ebola Virus Explained — How Your Body Fights For Survival

Ebola is an extremely deadly disease originating in western Africa in 1976. The most probable theory of the disease’s origin is blood contact by humans with a primate carrying the virus. The initial symptoms seem mild, including fever, headache, muscle pain, and chills. Later on though, symptoms become deadly and unbearable, with a victim experiencing internal bleeding resulting in vomiting or coughing blood. Ebola is primarily spread through contact with bodily fluids of an infected person, or a person who has recently died from the virus. One strain of the Ebola virus has a nearly 3/4 mortality rate when contracted by humans.

The most deadly recent outbreak of ebola took place from 2013 to early 2016, with 28,646 cases and a shocking 11,323 deaths. The epidemic devastated multiple west African nations, with up to 59% of those hospitalized dying. Some other nations outside Africa experienced limited outbreaks of the virus, including four patients in the United States who were quickly isolated. A huge part of ending the pandemic was rigorous methods of contact tracing, and quarantining. Vaccines were used in a limited role to end the epidemic due to a lack of clinical testing at the time, but have since been used to stop several smaller outbreaks.

Today, much more is known about HIV/AIDS and its transmission, but in the early days of the epidemic in the 1980s, there was little knowledge on the disease. The disease was first identified in Los Angeles, San Francisco, and New York in 1981, but some experts believe that HIV could have been present in humans as early as the 1960s. Scientists have traced early transmission of the virus to non-human primates. Several misnomers exist regarding HIV/AIDS, including the now debunked patient zero theorem involving Canadian flight attendant Gaëtan Dugas.

More than 700,000 people have died of HIV/AIDS in the U.S. since the beginning of the crisis in 1981. The virus disproportionally affected gay and bisexual men, and was known by the moniker “gay cancer”. The virus only spreads through sexual intercourse or blood contact with an infected person. Today, treatment of HIV/AIDS is greatly improved, with doctors using methods to prevent HIV from progressing to AIDS in many cases. Patients may be prescribed a drug cocktail of antiviral drugs to fight the virus.

LESSONS WE SHOULD HAVE LEARNT FROM SARS 2003

The SARS, or severe acute respiratory syndrome, epidemic occurred globally in the early 2000s. The first outbreak of the virus was identified in China, and would spread throughout east Asian and as far as the United States. Approximately 8,000 people were infected with SARS during the Epidemic, with almost 1,000 deaths. Patients with SARS may experience fevers, aches, diarrhoea, and pneumonia. The virus is spread through bodily droplets, when an infected person coughs or sneezes, the suspended liquid may be inhaled and infect another. SARS was ominously labeled the first pandemic of the 21st century by the media. In comparison to covid-19, SARS had a far higher mortality rate, with 10% of those infected not surviving their illness. The World Health Organization and CDC worked tirelessly during the pandemic to restrict travel and contain the virus as much as possible. Ultimately, the United States would see only eight cases, and measures were effective in preventing a massive outbreak in North America.

The 2009 H1N1 virus, also known as swine flu, is a strain of influenza which caused an 11 month world-wide pandemic. This influenza virus strain is also responsible for the Spanish Flu and Russian Flu pandemics. The disease’s namesake comes from the virus arising from a mixture of genetic material from various bird, swine, and human flu viruses. This new virus combines its genetic material with the Eurasian pig flu virus, resulting in its name. Its symptoms are similar to the flu, and experts from the World Health Organization suspect that it is no deadlier.

Due to the unknown number of asymptomatic cases, it is difficult to pinpoint the exact number of cases during the pandemic, but experts estimate that it could be as high as 700 million to 1.4 billion. The number of estimated deaths range from 150,000 to 575,000 people, for comparison, 250,000 to 500,000 people die from the flu each year.

The Story of Cholera

Many people are unaware that there is currently a Cholera pandemic which has been ongoing since 1961 in many underdeveloped nations. Cholera primarily spreads when individuals consume water which is contaminated with fecal matter. For this reason, people in third world nations face an increased risk, and developed nations have seen a sharp decline in cases over the years as sanitation has improved to an all time high. If cholera is untreated, an infected person can die within hours. Common symptoms include diarrhoea, vomiting, thirst, and dehydration, and begin somewhere between 2 hours and 5 days after exposure.

The most recent outbreak of Cholera in the United States ended in 1866, with up to 1/10 people living in large cities dying from the disease. The primary way to fight cholera is to provide at risk regions with adequate sanitation services and clean drinking water, along with using cholera vaccines selectively when appropriate.

What Exactly Is Typhoid Fever?

Typhoid is a bacterial disease, and can be carried and spread without symptoms. The most common symptoms of the disease are a high fever, and sometimes abdominal pain, headaches, and constipation. The disease is known for some patients developing skin rashes characterized by rose colored spots. These symptoms are caused by the bacterium’s growth in the victim’s blood and intestines.

The most famous outbreak of typhoid in the United States occurred in 1906, involving the infamous Mary Mallon, better known as “Typhoid Mary”. Mary is thought to have brought Typhoid to the United States as the first asymptomatic carrier. The Irish immigrant infected an estimated 53 people in her work as a cook. She was quarantined by authorities but would return to her work as a cook, eventually being put into forced isolation for the final 30 years of her life. The epidemic’s ending was in large part due to the widespread usage of the vaccine, which is between 40 and 90 percent effective in preventing transmission of the bacterium, and can last up to 7 years.

Whooping cough is also called the “100 day cough”, coming from the disease’s symptoms sometimes persisting for up to 10 weeks. Whooping cough is an extremely contagious bacterial disease spread through suspended water droplets projected through an infected person’s sneezing or cough. The first symptoms of the disease resemble the common cold, but are soon followed by violent coughing fits lasting weeks. After a fit of coughing, a high-pitched whoop sound may be heard as the person breathes in, hence the name. Some individuals who suffer from whooping cough may cough so violently that they vomit or break ribs. Symptoms normally begin 7-10 days after infection; infections may occur in those vaccinated, but with more mild symptoms.

Whooping cough affects 16 million people each year, primarily in developing nations, with approximately 61,000 deaths. Most cases today occur in developing nations due to the lack of adequate health treatments. Outbreaks have been significantly diminished in the United States since the widespread implementation of vaccines, but some outbreaks have occurred in the early 2010’s. One such outbreak in California saw almost 10,000 cases and 10 infant deaths after misdiagnosis by doctors. Experts have concluded that this outbreak and others are in large part due to members of the public refusing the vaccine for non-medical reasons. 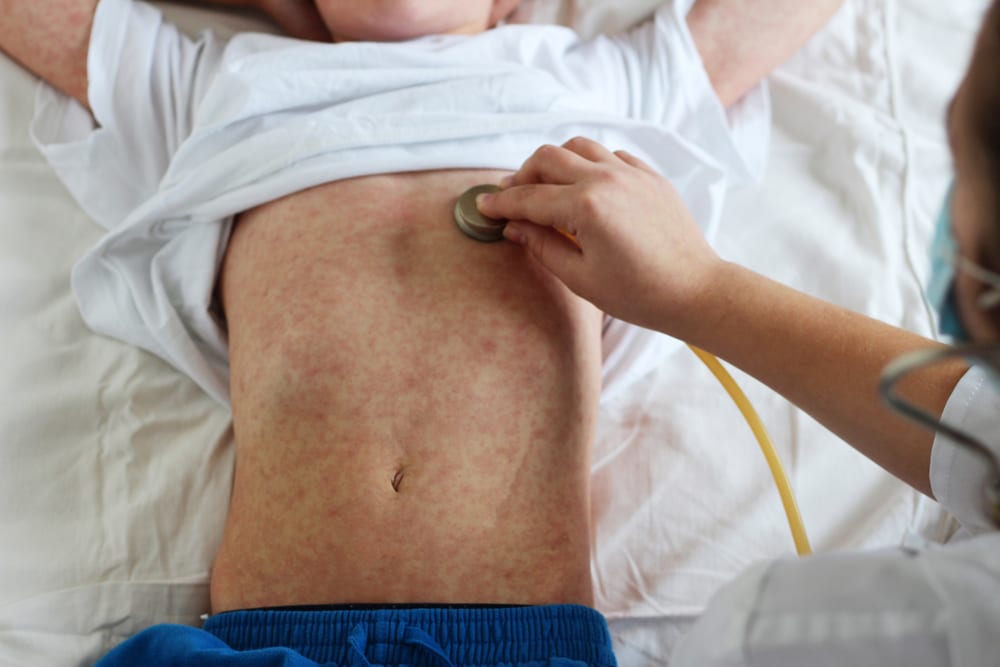 The Measles virus is a highly contagious airborne disease spreading through coughs, sneezes, and contact with nasal secretions. Symptoms normally reveal themselves 10-12 days after exposure, and can last 7-10 days. Initial symptoms include a high fever, cough, runny nose, and inflamed eyes. Two to three days after the start of these symptoms, Koplik’s spots may develop. These are small white spots which form inside the mouth, appearing like grains of salt near the molars. After the development of Koplik’s spots, the measles rash develops in the face and spreads to the rest of the body. Some other complications may also arise from the virus including pneumonia from measles induced immunosuppression.

Measles was considered eradicated from the Americas in 2016, but cases have continued to be identified since. One outbreak in 1991 took place in Philadelphia, in which 1400 people were infected with measles and nine children died. This spike began at the Faith Tabernacle Congregation faith healing church, who discouraged members to get vaccinated.

History of Polio – Part I: Suffering the disease

Poliomyelitis is an infectious disease caused by the poliovirus. Polio is spread by a person ingesting infected feces, and in rare cases through infected saliva. The vast majority of those infected with polio have no symptoms, and about a quarter experience mild flu-like symptoms. In 1/200 cases, the virus moves from the gut to invade the central nervous system. This causes the individual to experience muscle weakness, most commonly in the legs. The muscle weakness may also less commonly involve the muscles of the head, neck and diaphragm, and in rare cases require the assistance of an iron lung to maintain normal breathing. In victims where some level of muscle weakness occurs, 2 to 5 percent of children and 15 to 30 percent of adults die.

The first polio epidemic in the United States began in 1894, and large outbreaks would continue to pop up throughout the first half of the 20th century. Polio had a massive impact on America and public health, with the most famous case being president Franklin Delano Roosevelt. The peak period of polio in the US occurred between 1916 and 1955 with the approval of the Salk vaccine. In 1952, there were 57,628 reported cases and 3,145 deaths. Polio was eliminated in the Americas in 1994, and current vaccination efforts have helped to eradicate it from many third world countries as well.

Many consider smallpox to be a disease associated with the age of exploration, and the mid-17th century, but smallpox was not fully eradicated until 1978. The disease’s origin is unknown, but evidence from Egyptian mummies indicate it existed at least before the third century BCE. Small outbreaks occurred until its eradication, but the last major outbreak in the United States happened in 1902. The first symptoms of smallpox include fever and vomiting, with the eventual development of ulcers and distinct blisters. These blisters are characterized by a dent in the middle, and are filled with fluid. These blisters eventually scab and fall off leaving scars. Some of these scabs have survived in “time capsules”, such as a scab found in a Civil War era book in the late 20th century.

The last smallpox outbreak began in 1901 and lasted three years, with 1596 cases and almost 300 people dying. The epidemic had a 17% fatality rate, far less than previous outbreaks in less developed nations and without proper control measures. The smallpox vaccine is the primary reason for the disease’s eradication.

10 Myths About Exercising That Will Make You Mad