Preparation for the inevitable or purposefully planning for something? That’s the question that’s been birthed in the minds of millions throughout the world who have learned of the following. While simulations can most certainly be a fantastic means of learning appropriate ways of responding to a threat, some kinds of training are just a tad eerier than others.

It’s one thing to figure out how you’re going to respond to a potential financial crisis. But when you start talking about a bioterrorist attack, cyber pandemic, or plane hijacking, I don’t think anybody would argue there’s something inherently creepy here.

But perhaps that’s part of the appeal, right?

Either way, here are some of the eeriest government simulations which have ever been performed.

Related: 10 Reasons Why A Nuclear War Could Be Good For Everyone

Performed in late 2019 by the Pentagon and modeled by the Princeton Science and Global Security Project Team, Plan A simulated how a full-blown nuclear war with Russia could play out in our modern-day world.

It all starts with a U.S./NATO conglomerate moving too close to Russia for The Bear’s comfort. As a warning shot, Russia fires a nuke into NATO territory. This, in turn, causes a retaliatory nuclear strike, with things only escalating from there.

Within a matter of hours, virtually all of Europe is incinerated by nuclear bombs, with it being doubtful many would be able to survive the ensuing fallout and radiation. Once Europe is destroyed, America’s mainland launches a large-scale nuclear attack. A Russian counterattack ensues on American soil, and within the first few hours of the war, 90 million are dead on a global scale.

This is a conservative estimate, however, as the simulation doesn’t account for long-term injuries (e.g., cancer) or deaths due to fallout as well. According to this simulation, if you had hopes for a Red Dawn situation, you’ll be lucky to survive through the first day of a Russia-U.S. war.[1]

Back in 2018, 10 various professionals in their respective fields participated in a daylong, more serious version of Dungeons and Dragons: a bioterrorist attack.

After an agent is released in both Venezuela and Germany, the bioweapon spreads throughout the rest of the world. Players within the simulation had to figure out as much as they could about this brand-new pathogen (affectionately termed Clade X) before determining the best means of keeping the infection in check, keeping infrastructure intact, and keeping healthy people from dying was.[2]

On June 22-23, 2001, yet another bioweapons attack against the U.S. was war-gamed. This time against a novel smallpox attack. The simulation spanned a period of 13 days, with Day One involving a single case of smallpox popping up in Oklahoma City.

From there, the pox spread to 25 other states within the U.S. and 15 foreign countries. A number of governmental agencies were involved in the simulation, with the end results being the discovery that such an attack would result in mass casualties, a breakdown in “essential institutions,” violation of human rights, and the healthcare system coming close to collapse.[3]

Many have expressed concern about the use of the term “dark winter” being repeatedly applied to the winter of 2021-2022.

If you’d like to play through Dark Winter on your own to see how you would fare, you can find the script for the game online.

On the morning of September 11, 2001, NORAD was operating Exercise Vigilant Guardian 01—a simulation to see how American leaders would respond in the event of a passenger plane being hijacked and flown into a building.

Unfortunately, in the midst of the simulation, the World Trade Center and Pentagon attacks took place. Those involved in the simulation initially showed confusion as to whether the real-world attacks were simply a part of their simulated training or not, eventually realizing the truth.[4]

Created by the Rockefeller Foundation and the Global Business Network, Lock Step was one of four simulations published in 2010 under the title of “Scenarios for the Future of Technology and International Development,” which you can read online.

This simulation imagined influenza rocking the globe. The source? Geese, natural reservoirs of influenza. Within just seven months of Patient Zero, 20% of the world’s population has been infected, with 8,000,000 deaths—most being healthy, young adults.

Poorer nations suffer worse fates than the rest of the world due to an “absence of official containment protocols,” and China seems to be the global winner throughout the simulation. As is written, “A few countries did fare better—China, in particular. The Chinese government’s quick imposition and enforcement of mandatory quarantine for all citizens, as well as its instant and near-hermetic sealing-off of all borders, saved millions of lives, stopping the spread of the virus far earlier than in other countries and enabling a swifter post-pandemic recovery.”[5]

As of this writing, the name of this simulation hasn’t been released to the public. What we do know, though, is that it was performed in the fall of 2020.

This simulation begins with a biowarfare attack by China against U.S. Navy vessels. Then, as the Navy is reeling under the infection and trying to figure out just what is going on, China publicly states they’re engaging in a massive war game, positioning their assets for such. Of course, this is a cover, and an invasion of Taiwan quickly follows—unhampered by the debilitated U.S. Navy.

The end result was yet another wargame showcasing a U.S. defeat at Chinese hands.[6] 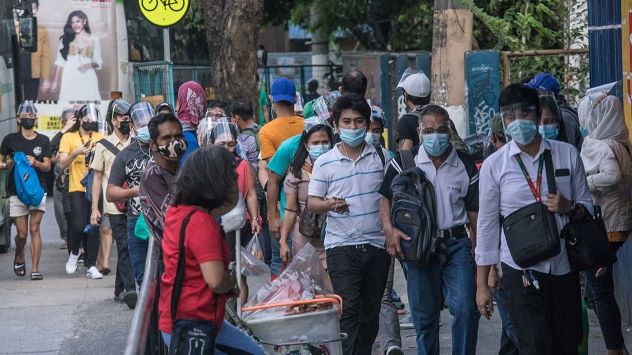 In this case, it was the discovery of a new respiratory virus—SPARS—brought to the United States after a small Baptist church returned from doing missionary/humanitarian aid work in the Philippines after a flood.

The exercise strove to enhance interagency message consistency and media relations but also had a special emphasis on determining the best way of dispelling the spread of rumors over social media. You can read through the entire exercise book online.[7]

Is U.S. Strategic Command preparing for a zombie invasion? Sounds a bit far-fetched, right? Actually, no. This whole situation was actually war-gamed extensively back in 2011, reportedly as a means of training students at the Joint Combined Warfighting School without offending or alarming foreign nations should it be found a plan for fighting against a Chinese invasion was currently in the works.

Various types of zombies possible, best weapons and tactics for destroying zombies, and locations within the U.S. that are bound to survive a zombie apocalypse can all be found in this report.[8]

Performed in October 2019 by the Bill and Melinda Gates Foundation, World Economic Forum, and others, Event 201 examined the global response to a novel strain of the coronavirus raging across the planet.

The scenario has the novel coronavirus pass from bats to pigs and, eventually, to humans at a wet market before making its first appearance in South America. From there, it rapidly spreads throughout the rest of the world, promptly killing 65 million people worldwide.

Concluding remarks of the tabletop exercise found that there needs to be stronger “public/private relationships.” Just three months later, the word coronavirus would become a part of the daily lexicon of people worldwide.[9]

A cyber-attack with COVID-like characteristics?

Hosted by the World Economic Forum in early 2021, Cyber Polygon was a massive simulation involving game players from throughout the world. In this exercise, a “cyber pandemic” was ravaging the globe, leaving much of the internet infected and cyber structure unusable.

Billions of dollars in damage have taken place, and game players had to determine the best means of not only stopping the virus from progressing but also from keeping such an event from taking place in the future.

One of the main methods used to fight the cyber pandemic was the disconnecting of all devices from the internet (perhaps with an internet kill switch?).[10]