Hyperrealistic cakes started hitting the meme scene a handful of years ago, ultimately culminating in a TikTok challenge to guess if it’s cake or real. And while we “oh and ah” at these cake achievements, sometimes, when you see that cross-section, you don’t really want to eat it. Not to mention that most of these cakes are loaded up with fondant, which isn’t that tasty. That said, let’s start the list. Here are ten realistic cakes that you don’t want to eat.

Related: Top 10 Bizarre Cakes You Won’t See On The Great British Bake Off

The war on tobacco, or rather cigarettes, is certainly no deterrent to conjuring up cool by using the image of the cigarette. But it really only works when a good-looking celebrity is the one smoking—and when you don’t see any of the carnage associated with it. Truly, one of the nastiest things out there is an ashtray with smushed-up butts, left out for days, wafting its stale smoke-laden scent into the room. So, why would you want to order or eat a cake with a fondant ashtray, complete with cigarette butts on top?

YouTuber Seller FactG had a reason, and I guess it was to show us all how to make it. Yes, they did a great job, and yes, this cake maker is talented. But no amount of talent would make me want to eat a cake with cigarettes and an ashtray on it. Someone else can fill that niche and their pie (cake) hole.

Not going to lie. This next cake is really impressive, way more than the cigarette cake. Cakes StepbyStep shows us how to make a colorful sneaker cake, although I’m not sure how an amateur baker would be able to pull this off, even with the tutorial. More like step-by-step, you suck at making cakes, let me show you how it’s done, okay?

The cake maker manages to make a beautifully formed shoe mold out of a blue cake and adds shoe texture (because that exists) to the fondant. I barely even know how to tie my shoes.

Fondant hatred aside, this cake may be obvious as to why you wouldn’t want to eat it. It is one of the most horrific, gruesome things I’ve ever seen in the baking world. Epic Confections designed this cake to be a Halloween centerpiece, and boy, did they hit the mark!

There is skin sewn together, bones, guts, a slimy, bloody glaze. It reminds me of dissection in Anatomy & Physiology in high school. The baker really did what they set out to do because I’m not touching this cake with a 10-foot pole, let alone eating it.

I do need to talk about fondant, though, because the intestines are made of it. Fondant is this marshmallowy, sugary icing that you can mold and dye to your liking. But it just tastes like this strange, soft, sugar comforter. It really is like eating a cake blanket. Now imagine a tube of that, in the shape of intestines. So if you are going to eat this cake, peel of the intestines first.

People Get Surprised With Cockroach Cake

Cockroaches are a living nightmare and an unfortunate fact for urban apartment dwellers. And you know that where there’s one, there’s hundreds of them lurking in the darkest corners of your house and crawling up your drains. However, with shows like Fear Factor, cockroaches have become less of a threat and more of a challenge. How long can you hold one? Can you put one in your mouth? Can you make a hyperrealistic cake of a cockroach?

Yes, to that last one. The answer is yes.

Cake maker Katherine Dey is an expert at hyperrealistic cakes, often crafting unusual picks. Scrolling through her Instagram, you’ll see a snail, larva, a liver, skulls, bats, and a human brain with the spinal cord attached to it. So, of course, she just had to make a cockroach cake.

Presented to a group of Buzzfeeders with terrible cockroach backstories, it is understandable that they freaked out when they first saw it. The detail is so incredible that it actually looks like the cake cockroach is alive. They eventually ate the cake but watching them slice it, you expect bug guts to come gushing out. Blah.

When I was an innocent fourth-grade student, our class had a Halloween party. Every student had to bring in something to eat, which, in itself, is a potluck disaster. But this one kid brought in a dessert called kitty litter, complete with Tootsie Roll cat poop and all. It looked like kitty litter, all right.

Now, I thought that would be the first and last time I’d have to look at a kitty litter confection, but oh, I was wrong. I present to you the kitty litter cake. Going by a Try Guys “Without a Recipe” rubric, it is definitely a cake. But the cake is in a bin. And crushed butter cookies make the litter. And the poop even has those wrinkles in them. I’m not sure if the end product is supposed to be a cake or an actual litter box.

I don’t even know if we’re supposed to eat this cake or gawk at it and try to scoop out the cat poops. 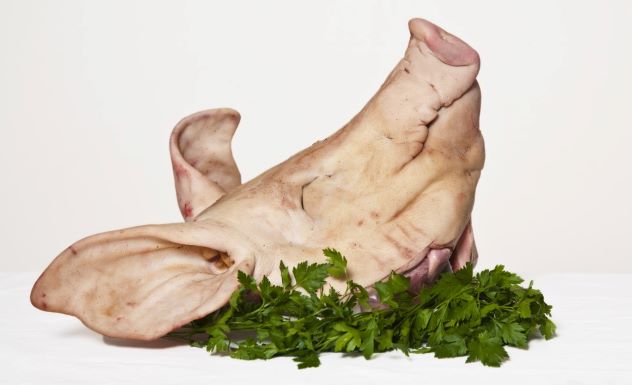 Nobody harmed any pigs while making this cake.

Going back to Katherine Dey, because there’s just so many good ones to choose from, we have the pig head cake, presented with a garnish on a silver platter. Though head cheese, as it’s officially called, is well-loved by some, when you’re literally given the full, unprocessed pig head on a platter, actually eating pig head becomes way less desirable.

It could be a good, somewhat cruel joke, though. As Dey captioned the official photograph of it, “Made a birthday cake for a vegan.”

There are just some cakes you don’t want to eat because you actually don’t know it’s a cake and why would you eat that anyway? One example can only be introduced by a Vine of social media past: “What are those?!” “Those are my crocs!”

This cake looks so real that you’d probably assume your foot goes in it, not that you put the shoe in your mouth. If you skip to 0:26 in the video, you’ll see the full detail the baker, Tuba Geckil, added to the shoe. The croc holes are perfectly round; the texture of the croc sole is perfectly bumpy. So why would you ever want a croc in your mouth that doesn’t belong there in the first place?

Most of the reason you don’t want to eat these cakes is psychological. It’s the thought of eating something that isn’t cake that psychs you out. And this cake falls into this category.

Technically a cupcake but still a cake. These pimple cupcakes are so obscene that no popaholic would be able to comfortably stomach the sight and eating process of them. They probably taste amazing, but I won’t be finding out anytime soon. I mean, the head of the zit is even red and inflamed, with some sort of substance oozing out of it. Oh yeah, the baker’s went in hard with this one. You can even squeeze the top, and pus, the frosting, will come out of the zit. And then you’re supposed to eat the frosting. It is accurate, clever, and inedible just by sight.

But tell me how it tastes because, again, it probably tastes really good.

If your initial thought is that a Dead Head cake is a Grateful Dead, LSD-laced cake, you’re wrong. Sounds fun, but no. This is a cake literally made to look like someone’s severed, bloody head, eyes rolled back and all. So even though this cake has a buttercream frosting and red velvet cake base, I just can’t get over the idea of eating someone’s head, gushing with fake blood.

This one takes the cake. Though it may not be the most hyperrealistic, it’s pretty messed up, and one can only imagine the type of cannibalistic fantasies the bakers are trying to fulfill with this one.

A Chinese street food vendor made a cake shaped like a human torso, complete with arms. Then, someone with face paint sits underneath the cake and pretends to writhe as if their body is being eaten alive. It’s savage, mayhem, and someone else’s taste.

Hungry customers ask for pieces of the cake, and vendors dig right on in. You don’t know what it means when everyone wants a piece of you until someone turns you into a cake.