The latest Batman movie is a dark and serious noir detective film where Batman must stop the Riddler, who is a crazed serial killer in this iteration. Now, as cool as that sounds (and is!), it can be hard to remember that comics, especially Batman comics, used to, and sometimes still are, incredibly silly and stupid.

So, I feel as though it is my duty to talk about the weirdest and dumbest things Batman has done or has used in comics!

Many Batman fans (and even just movie fans) know about the infamous scene from the 1966 Batman movie starring Adam West as the Caped Crusader and Burt Ward as the Boy Wonder. In it, Robin gives Batman shark repellent to fight off a robotic shark sent by the Penguin. Shark repellent has also been shown in 2017’s The Lego Batman Movie, where Robin (played by Micheal Cera) is obsessed with the shark repellent.

A common misconception about this particular object is that Batman carries it in his utility belt. If you actually watch both of these movies, you’ll see that in the 1966 version, the shark repellent is, in fact, located in the Bat Helicopter and not his utility belt. A similar thing appears in The Lego Batman Movie, where it’s on display in the Batcave. Many comic fans like to point out that misconception when it’s brought up, but that misconception is actually a misconception itself! The first time shark repellent was ever used by Batman in any media was in 1958 in Batman #117, where Batman and Robin travel to an alien world and get attacked by “shark-like” creatures. Batman quickly brings out his Shark Repellent Bat Spray and repels the alien monsters away.[1]

9 Lifting a 700-Pound Gorilla and a Bomb 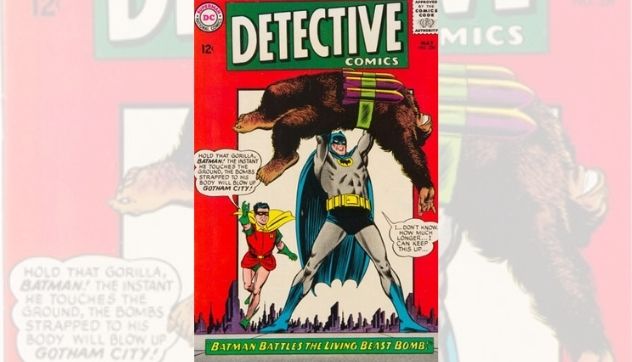 Batman is one of the only superheroes not to have powers. In order to compensate, he is the 2nd smartest man on the planet and has his body in peak physical condition. Although it seems the only way you can obtain this is through One Punch Man levels of training, Batman had a simpler solution to test his strength and conditioning—lifting up a gorilla with a bomb strapped to the animal’s chest.

Some may argue that this practice is “inhumane” and “dangerous,” and in all honesty, it is. Detective Comics #337, published in 1965, features Batman having to stop a super-intelligent 700-pound gorilla from bombing part of Gotham City by lifting him up and waiting for the bomb to go off. Why, you might ask? Because they figured out the bomb wouldn’t blow up if the gorilla wasn’t on the ground.[2]

8 Being the First Robin 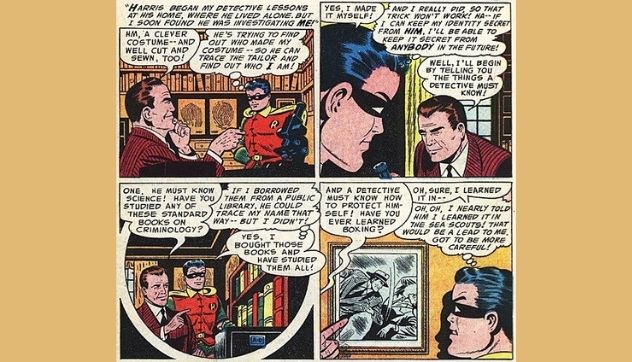 Batman’s faithful sidekick is the Boy Wonder, Robin! Without him, Batman wouldn’t be the same character we know today. Plus, the Dynamic Uno doesn’t sound as cool. Many of you may know that the first Robin was Richard John (Dick) Grayson, and he served as Batman’s partner for many years. But, according to Detective Comics #226, published in 1955, Bruce Wayne was the first Robin.

In the comic, we learn about how the World’s Greatest Detective became a detective by learning from a man named Harvey Harris. Harvey gave a young Bruce a Robin-like suit and trained him in the ways of deduction. Also, for a bonus fact, according to that issue, the name “Robin” came from the quote Harvey told Bruce. He said that Bruce was “as brilliant as a robin redbreast,” which must be some ’50s speak ’cause I certainly don’t understand what that means.[3]

Many people are fans of Batman; he’s often debated to be the most popular superhero. A lot of fans of other characters might argue who the number-one fan of that character is, but true Batman fans know that there is only one correct answer. That answer is the fifth-dimensional imp who first appeared in Bat-mite! Bat-mite is a tricky character to talk about because what he actually is, is complicated, like all things comics.

In many stories, he could be considered just a figment of Batman’s imagination, or he is truly real; who knows!. Bat-mite is the self-proclaimed #1 fan of Batman and has reality-warping powers that he often uses to make Batman’s adventures “more interesting.” Weirdly enough, the most recent appearance of Bat-mite (as of writing this) was in a Scooby-doo and Batman team-up comic. As funny as it would be for that to be the only appearance of the character in the last ten years, I find it funnier that Bat-mite consistently appears in the Scooby-Doo and Batman team-up comics.[4]

6 Being in the Top 10 of Gun Marksmanship

No guns. That’s been Batman’s rule since Batman #15, published in 1943. Ironically the cover features him using a trench gun that’s very clearly loaded with lethal bullets. However, I’m not going to argue with Batman, especially if he has a trench gun. Ever since that issue, he claims that guns are for the weak and cowardly.

Kind of awkward since his former partner and adopted son, Jason Todd, uses them—but I won’t judge that much. After all, he apparently uses it enough to break the top 10 world list. According to The Batman Who Laughs #3, published in 2019, Batman is one of the top 10 marksmen in the world.[5]

This one is a bit of a cheat since it doesn’t actually happen inside the comics, but I found it too funny to pass up the chance to talk about it. In 1972, the cartoon The New Scooby-Doo Mysteries premiered, with the second episode being a team-up with Batman and Robin. In the episode titled “The Dynamic Scooby Affair,” Batman is about to bring the gang to the Batcave but must blindfold them, so they don’t know where the cave is located.

During this process, Shaggy asks Batman if he can have a snack when they get to the Batcave. Batman says not to worry because he’ll have “Bat-milk and cookies” for everyone. Now it’s unclear whether this was a classic case of Batman putting “Bat” in front of every single noun (and sometimes verb) or if this was actual milk from bats. I think it’s best we leave the answer as unknown for now.[6]

Internet Forums are notorious for conspiracy theories. It could be as tame as “Quarters are actually worth 24 cents, not 25” to “Aliens Are in Control of the Processed Cheese Factories!” Either way, it’s still a conspiracy, no matter how crazy and how little evidence there is to back it up.

With the comics always adapting to the modern age, they would eventually have to address the internet and its conspiracies. So Batman did just that in Batman Incorporated #6, published in 2011. In this issue, Batman is manipulating internet forums saying that Batman is Bruce Wayne and leaving many misleading theories. One of them is that Batman is multiple people, and another one involves Batman replacing Bruce Wayne with a body double. As crazy as Bruce sounds here, he’s probably incredibly smart by putting so much misinformation about himself. So if his identity was revealed, the truth would be lost amid all the fake theories and crazy conspiracies.[7] 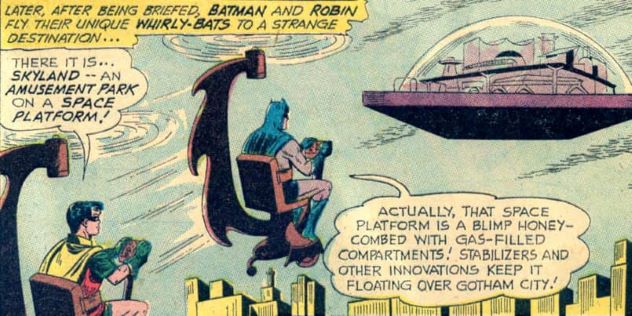 Batman needs to stop crime as fast as he can, and that means needing a fast vehicle to get him from one side of Gotham to the other. He could use one of his many Batmobiles or Bat-planes, or Bat-Helicopters, or Bat-cycles, or Bat-literally any vehicle. The man has them all, apparently. He has so many options to choose from that it’s honestly just ridiculous with some of them.

One of those ridiculous options is the Whirly-Bat! The Whirly-Bat first appeared in Detective Comics #257, published in 1958. The Whirly-Bat is a small one-man helicopter used for aerial surveillance and combat. These things were not that effective, though, as they were destroyed during their very first mission. Batman would later reconstruct them, but I think the fact they were destroyed on their very first use is proof enough of how inefficient they were.[8]

As previously mentioned, Batman’s body is in peak condition. This is something he must maintain at all times. That means plenty of exercise and a healthy diet—aka no fast food, junk food, processed sugar, diet sodas, and especially no alcohol for himself.

Despite this, Batman has actually been shown drinking actual alcohol every now and then, but that’s mostly during one of his low points. Normally Batman pretends to drink alcohol by drinking ginger ale. This is demonstrated in Batman: Tenses #1, published in 2013, where he orders a gin and tonic and then dumps it outside. Also, in Batman #36, published in 2017, Superman passively asks, “Do you ever get tired of ginger ale?” To which Batman boldly states, “every damn day.”[9]

We Made Every Batarang Ever?!

As iconic as many items of Batman’s arsenal are, none can compare to the batarang. Batarangs are incredibly versatile and have been helping Batman ever since 1939 in Detective Comics #31. Batman even uses the batarang as a grappling hook by attaching a rope to it in some cases. Batman has many iterations of the batarang, including magnetic batarangs, explosive batarangs, remote-controlled batarangs, and electrified batarangs.

Some of those sound pretty dangerous, but none of them can compare to the most dangerous batarang of them all. It’s so dangerous that it’s kept under a tarp underneath the Batcave. This batarang is Batarang X. Batarang X is a giant red batarang that can be launched off the Batmobile and used as transportation for Batman. Batarang X first appeared in Detective Comics #244, published in 1957.[10]