We only have one planet (for now), and until we find a way to inhabit another, we have to make do with what we have and protect it as much as we can. But what if our only habitat and some of those sharing it with us are actively conspiring against the majority of us in ways that can only be properly depicted in B-horror movies? What if the people we thought we knew (or knew about) turned out to be alien reptiles or robots? What if we all chose the wrong path, and now we’re on a collision course with our past or the devil… or something much worse?

What if we don’t even really exist?

Don’t panic! You’re fine, but some people don’t think so. So here are ten conspiracy theories about the world we live in.

Related: 10 Reminders Of The Realities Of Mind Control

10 The End of the World as We Know It

If you’re still waiting for the infamous doomsday(s), give it up. Apparently, the world has already ended, and we all just missed it. Yup, the ancient Mayan prophecy is said to have been fulfilled in 2012. And this theory was given an extra boost by a Twitter user named Nick Hinton, who believes that “nothing has felt right since 2012.”

Also, it was the year that CERN found the Higgs Boson particle, predicted by Stephen Hawking to have the power to destroy the universe. Seems that CERN blew up the universe, and now we’re living in a series of simulations because our collective consciousness was moved into a parallel universe.

Oh, and remember the ol’ Mandela Effect? That is supposedly remnants of memories from our old life on the real Earth.[1]

9 The horror of the Denver Airport

Airports are fairly boring places. It’s just a pause between different destinations, and most people hate being stuck there longer than absolutely necessary.

However, if you happen to find yourself at Denver International Airport, you might just discover more than enough to keep you occupied until your flight number is called. Rumor has it that this huge airport is the headquarters of the Illuminati and that it doubles as a ready-to-use concentration camp for Americans that they’ll be forced to live in once the New World Order takes over.

As you’re heading to the boarding line to get the hell away from this airport, don’t forget to keep an eye out for the “proof” that this place is being used for evil purposes. This includes a huge Masonic slab sporting the words “New World Airport Commission” and eerie murals featuring soldiers wearing gas masks.

As your plane finally sets off for any place but there, you might just see the red eyes of Blucifer blinking ominously at you from his spot outside the building.[2]

Princess Diana Had A SECRET DAUGHTER

By now, it’s clear that the British monarchy is made up of Illuminati members, reptilians, vampires, secret agents, and descendants of Jack the Ripper. After all, it must be the Queen’s reptilian blood that has kept her up and at it for so many years, right?

One of the most famous royal family members, who also has a host of conspiracy theories surrounding her life and death, is Diana Frances Spencer, affectionately known as “the People’s Princess,” or the Princess of Wales.

One of the more persistent rumors is that Prince Charles and Diana secretly had a daughter named Sarah. Apparently, the Queen demanded that Diana undergo medical tests to confirm that she could bear children before the announcement of Diana and Charles’s engagement would go ahead.

Diana’s eggs were then harvested and fertilized with Charles’s sperm. After the tests came back positive, the embryos were to be destroyed. Except the doctor didn’t get the memo. Instead, he implanted them into his wife, making her an inadvertent surrogate for the royal couple.

There have been further claims that the baby was born eight months before Prince William and would be second-in-line to the throne after Prince Charles. The conspiracy even says that the Duchess of Cambridge, Kate Middleton, has met with Sarah Spencer and that the woman is a dead-ringer for the late Princess Diana.[3]

Most people believe that Earth has either been around for billions of years or that it was created a mere 6,000 years ago—depending on your beliefs. However, did you know that there are those who believe that the world was created last Thursday?

But what if you remember things that happened before last Thursday? Well, it doesn’t matter because Last Thursdayism can explain anything, as it is an unfalsifiable hypothesis. So anything you say against it can be disproven simply by insisting that the creation of the Earth happened Last Thursday.
Is your brain broken yet?[4]

6 No Such Thing as a Roman Empire

The Roman Empire started out as a small town on the Tiber River in Italy and grew into an empire that left an indelible impression on Earth as we know it today.

However, if a TikTok conspiracy theory is to be believed, the Roman Empire never existed. So… @momllennial has decided that there is no proof that Hadrian’s Wall is of Roman construction, that Roman archaeological sites are simply misinterpreted, and that the entire idea of the Roman Empire was a hoax perpetuated by the Spanish Inquisition. Furthermore, she also claims that there is not one true Roman document in existence. One claim in particular really got under the skin of academics and historians—namely, the one where @momllennial casually compared what she calls the “so-called” Roman Empire to the Disney empire.

After heavy backlash, she backtracked slightly, stating that her claims were just metaphors but still argued that massive gaps exist in the archaeological records regarding Ancient Rome. Strangely enough, her bio states that she possesses a bachelor’s degree in anthropology and history.[5]

We all know that Finland doesn’t really exist, but did you know that Australia is also just a figment of our collective imagination?

Of course, this is very believable. After all, what even is a kangaroo? And what kind of place has an Outback where people just disappear forever?

Therefore, it should be common knowledge at this point that Australia is basically a huge coverup by the British government, who murdered all the prisoners it supposedly sent to the non-existent island. And don’t be fooled; everyone is in on it, including pilots, tour guides, and the actors who live on decoy islands and pretend it’s a place called Australia.

You live in Australia, you say? No, in fact, you might be living in South America or one of the islands nearby.[6]

4 The Darkness Behind the 2004 Tsunami

Tsunamis are terrifying events that no one but those who lived through one can truly fathom. The 2004 Indian Ocean tsunami was one of the biggest and deadliest in history and is still spoken of in hushed tones in the affected countries.

However, as with all tragic events of this scale, the conspiracy theories are not far behind. One of these theories claims that India was testing nuclear bombs, and this caused the earthquake that led to the tsunami.

Then there is the theory that Jemaah Islamiyah, a Southeast Asian branch of Al-Qaeda, was to blame for the tsunami. They supposedly launched a terror attack in the form of an earthquake and tsunami so they could get their hands on some of the $3 billion in aid relief that poured in after the disaster.

Oh, and also, there are those who firmly believe that aliens did it. You know, so they could correct Earth’s “wobbly” rotation.[7]

3 There Are No Real Trees

The Strange Theory That Mountains Are Trees | Unveiled

The Earth is flat, and there are no longer any real trees.

This is according to the Flat-Earther movement, which says that the ancient trees of the world, which apparently extended 40 miles (64 kilometers) into the sky and had trunks two miles (3.2 kilometers) wide, no longer exist. And the “trees” we see every day are simply saplings of these ancient trees.

This theory was spread after a video appeared on YouTube in which a Crimean man claims that a cataclysmic event thousands of years ago destroyed 99% of Earth’s biosphere and all the trees in the world. The man goes on to say that mountains, mesas, and buttes are the remains of the ancient trees that have been destroyed.

Also, the rock found on Earth is not actual rock but the widespread rubble of these ancient trees.

2 What’s Up with Ronald Reagan’s Name? 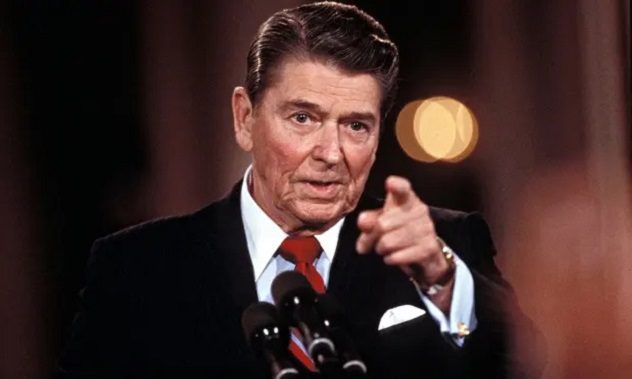 Did you know that the winning number in the Maryland lottery on November 4, 1980, was 666? That date also happened to be the day of the 49th quadrennial presidential election in which Ronald Reagan won in a landslide victory.

This obviously means that Ronald Reagan was the devil. Not only because of the ominous lottery number but also because Reagan’s full name spelled out 666 as well. You know, because each of his names has six letters: Ronald Wilson Reagan. More proof of devil shenanigans.

Also, at the time of the election, the planet Uranus made for an unusual configuration in the night sky, one that only comes around every twenty years.

Surely no other proof is needed to know that something demonic was happening and that Reagan was part of it all.[9]

Are You In A Simulation?

When the first Matrix movie was released, it messed with people’s heads. Are we living in a simulation? Is anything real? Then we moved on, as we always do. But for some, the doubt stuck and was transformed into a full-fledged conspiracy theory.

So, are we just nutrients for soulless machines? Taking the red pill means diving headfirst into a rabbit hole that says an advanced civilization will live long enough to create various simulated worlds with one base reality. This means we will all likely be (or might already be, depending on who you ask) in one of the simulated worlds and not the base reality.

While this theory obviously hasn’t been proven, it also hasn’t been disproven, which has led many to believe that those pulling the strings are aliens and that they are conducting simulation experiments on us. Why, you may ask? Well, seemingly, it’s to investigate the different possible outcomes of various simulations. Which scenario would lead to greater destruction and so on and so forth?
Still interested in the red pill?[10]