When most people think of serial killers, they often imagine someone who stabs their victims or shoots them. However, there is another method that some of the worst serial killers have used to kill their victims—strangulation. Strangulation is the act of choking someone to death by compressing their windpipe or specific blood vessels.

Strangulation can be an agonizing and brutal way to murder someone. It often leaves behind little evidence if the criminal is carefully discreet. Some survivors have died from fatal internal injuries. Strangling or choking victims is the highlight of many domestic abuse cases, but even serial killers utilize this twisted manner of killing.

Choking someone is considered a form of power or control over the victims. When strangled, victims can lose consciousness in seconds, and death is possible within minutes. This happens due to the blocking of the neck’s carotid arteries, which cuts off the oxygen supply to the brain. Other ways victims pass out from strangulation include blocking jugular veins and cutting off the victim’s airway.

This list covers these acts of strangulation, specifically those related to serial killers. Some of these assassins are well-known, while others are basically nameless. What do they all have in common? They all strangled their victims.

Eddie Joseph Leonski was born on December 12, 1917. His parents were Russian/Jewish immigrants, and he grew up in an abusive household where alcoholism was rampant. He was often bullied in school because of his overprotective and controlling mother. Eddie served in the United States Army as a soldier, touring Australia in 1942 and serving the following year in WWII. While on tour in Melbourne, Australia, the 24-year-old private murdered three women by strangling them.

His first victim was a 40-year-old woman named Ivy Violet McLeod. She was found dead—battered and strangled in the inner suburbs of Albert Park. The following week, Leonski struck again, strangling 31-year-old Pauline Thompson to death. The next week, Leonski strangled and murdered Gladys Hosking, another 40-year-old woman attending the University of Melbourne. He planned on killing more women, but some escaped his attacks and were later used as witnesses to convict him of his crimes. Leonski attained the name “The Brownout Strangler” because he murdered victims in low lighting.

When asked why he committed the crimes, the young man said he was intrigued by female voices. In an effort to “get the voices” of women, he strangled them to death. During his trial, it was thought that Eddie had an alter-ego who committed the crimes. Eddie was sentenced to execution by hanging on November 9, 1942.[1]

Arnold Karl Sodeman was born on December 12, 1899. He grew up in Victoria, Australia, and had an unstable upbringing. His father and grandfather died in mental institutions, and his mother suffered from episodes of amnesia. Arnold briefly ran away from home at the age of thirteen. He also served time in prison for multiple crimes, including larceny, armed robbery, and attacking a station master. Sodeman later settled down, taking a wife and conceiving a daughter. Nobody suspected what came next.

After the body of Ethel was recovered, a co-worker of Arnold claimed to have seen him near the crime scene. The co-worker joked with Arnold, who became angry, claiming he was never there. His co-workers tipped off the police, and Arnold later confessed, providing graphic details. Arnold’s signature way of discarding victims was leaving them gagged, bound, and strangled. He was executed by hanging on June 1, 1936.[2]

Charles Kwabena Ebo Quansah lived in Accra, Ghana, and worked as a mechanic. Born in 1964, Quansah is believed to have killed over 34 women during his life. He was initially arrested in 2000 for murdering his girlfriend, Joyce Boateng. During this time, law enforcement connected Quansah with another crime committed in 1996, where a woman named Akua Serwaa was found strangled to death near a local stadium.

Authorities had surveilled the mechanic as a possible suspect in these crimes. While serving time, he also confessed to strangling eight women in Accra, the capital city of Ghana. Before moving to Accra, Quansah was in and out of prison for various crimes like robbery and assaulting two women. His trial for the string of killings commenced on July 11, 2002, in Accra. Quansah was officially charged with strangling nine women to death and was later sentenced to death by hanging.[3]

7 The Strangler of Tacuba

The Strange and Disturbing Case of Gregorio Cárdenas Hernández

Gregorio Cárdenas Hernández is one of the most infamous murderers in Mexican history. Born in 1915, he grew up in Mexico City, and his parents were originally from Veracruz. Gregorio seemed to have a bright future ahead of him. He was awarded a scholarship to study chemistry at the National Autonomous University of Mexico. Also, Hernández suffered from an infection known as encephalitis, which causes brain inflammation. He suffered nerve damage from the disease.

In 1942, over a matter of weeks, Hernández murdered three young prostitutes and a fellow chemistry student named Graciela Arias Ávalos. It is believed that he buried the bodies in his garden. Soon after, he checked himself into a psychiatric hospital. After suspicious neighbors called the police on him, authorities found the bodies and arrested Hernández. During his life sentence, he escaped prison but was later caught. In 1947, Hernández received a pardon from Luis Echeverría, the president of Mexico. He later finished law school and spent the rest of his days working as a lawyer.[4]

The Disturbing Case Of The Panama Strangler | Silvano Ward Brown

Silvano Ward Brown is Panama’s first-ever serial killer. He was born on September 19, 1941, in Puerto Armuelles. He had a normal upbringing through childhood, but his father left when he was nine. After losing his father’s influence in his life, Brown started getting into trouble and even went to juvenile prison for two years. When he was only 18, he committed his first murder. He stabbed an 18-year-old girl named Paula Caballero while breaking into her house.

Silvano spent the next 12 years in prison on Coiba Island. After being released in 1969, he later strangled two prostitutes within a week. After authorities connected Brown to the two stranglings, he confessed to all three of his crimes. During a psychiatric examination, it was determined that Brown was an amoral psychopath. Doctors concluded that his condition led to his violent, murderous outbursts. After serving a 20-year prison sentence, he was released and now works as a security guard in Panama.[5]

Kenneth Erskine was born in Hammersmith, England, in 1963. As a young boy, he was abandoned by both of his parents, likely due to his special needs. As a result, he was violent as a boy, attended many special schools, and tried to drown classmates during field trips. For a while, Erskine committed various robberies and thefts to get by. But in 1987, he took his crimes to the next level. Erskine began committing a series of strangulations on elderly men and women. Each of his victims was killed in an identical fashion—strangled and left in their beds with the sheets pulled to their chins.

Kenneth was arrested on July 28 for trying to conceal one of his many bank accounts. Authorities then matched his prints to seven murders. One of his surviving victims, Frederick Prentice, also identified Erskine from a lineup. During his trial, Erskine claimed he suffered from amnesia, declaring, “I don’t remember killing anyone.” Nevertheless, he was sentenced to seven lifetimes in prison and required to serve 40 years before receiving a chance for parole.[6]

Steven John Grieveson was born in 1970 in Sunderland, England. His nickname was given to him because of his series of ligature strangulations on four children. He was convicted of murdering four teenage boys between 1990 and 1994. Starting in 1990, he murdered a 14-year-old boy named Simon Martin. Then, when Steven was 23, he murdered 18-year-old Thomas Kelly in a shed. Three months later, he murdered two more young boys—David Hanson and David Grieff, who were both 15 years old.

On Marth 11, 1993, after he was arrested for burglary, Grieveson was charged with the murders of three boys in 1995. After a six-week trial, he received three life sentences with no chance of parole until he served 35 years. Grieveson was not charged with the murder of Simon Martin until 2014. He later stated that he murdered three of the boys to conceal his homosexuality.[7]

Steven Wright grew up in the Norfolk village of Erpingham with his family. He was born on April 24, 1958. He had one brother and two sisters—all living with their father after their parents’ divorce. Wright dropped out of school at 16 and joined the Merchant Navy, where he became a chef. He later met a woman named Pamela Wright (who was not related), and they moved in together. Steven lived a double life, often gambling, drinking, and visiting secret brothels. In 2006, he murdered five prostitutes in Ipswich.

Steven was found guilty of the crimes in 2008 and sentenced to life imprisonment. He is also a suspect in at least five other murder cases—some of which still have ongoing investigations. A neighbor of Wright described him as “a real Jekyll and Hyde character.”[8]

The Wednesday strangler is the most mysterious character on our list. He is an unidentified serial killer thought to be from Japan. The nickname for the ghost killer was given after six out of seven of his suspected victims vanished on a Wednesday evening. The span of the Wednesday Strangler’s crimes is believed to be from 1975 to 1989. The killer is thought to be responsible for the murders of seven women in Saga Prefecture.

This series of crimes is also referred to as the Saga Women Murders. Five of the women were found strangled to death. Only the skeletons of the other two were retrieved, so how they died is unknown. In 1989, a man was arrested for an unrelated crime. He confessed to some of the murders but was later acquitted. The case is unsolved to this day. It is unknown whether there was more than one killer.[9] 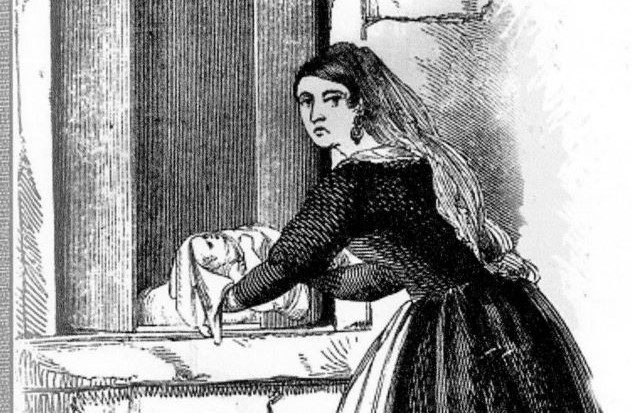 The tale of Luísa de Jesus reads more like a horror film script than an actual historical event. She was born on December 10, 1748, in Portugal. Due to financial trouble, she came up with an absolutely gruesome, coldhearted plan to make some extra income.

Foundling wheels were used in the 17th century to protect babies from abandonment. The device allowed mothers who could not (or did not want to) keep their babies to pass them on to someone else. They would place the child in the wheel and ring the church bell, which would notify priests and nuns. The government offered a cash reward to parents who decided to adopt a child. Luísa decided she would abuse this system. She adopted over 30 children using her real name and other aliases. Then she would strangle or smother the children and bury them in shallow graves. What could possibly go wrong?

It wasn’t until 1772, after a woman discovered one of the graves, that Lusia would be caught. Authorities traced the deceased child back to Luísa, and she immediately confessed to the killing. After searching her home and property, they found the bodies of 33 young babies. She had adopted a total of 34 children but refused to say where the last child was located. Luísa was charged with 33 counts of murder and sentenced to be garotted. She is the last woman to be executed in Portugal’s history.[10]