Among the many reasons people have for selecting a particular gift, throughout history, symbolism has often played a big part in gifts exchanged by high-profile individuals, especially leaders of nations and various celebrities. Sometimes the meaning behind these baubles is so subtle or personal that outsiders would never guess the real message. Whether the purpose of the gift is to seduce, mock, threaten, express admiration, etc., the message can take some very unexpected forms.

The Dogs of Cold War

Who would think of using a cute little dog to gloat over a victory? Apparently, one Russian leader during the Cold War did in 1961. Soviet Premier Nikita Khrushchev had a relatively cordial relationship with President John F. Kennedy, despite the fundamental differences between their two nations. However, a gift Khrushchev sent to Kennedy hints that he was not a gracious winner when the Soviets edged ahead of the U.S. in the space race by succeeding at sending a pair of female dogs, Strelka and Belka, into space and returning the animals to Earth alive.

He sent the offspring of Strelka, a puppy named Pushinka, to President Kennedy to seemingly, rub in the USSR’s triumph. According to a Reader’s Digest article, Kennedy responded by pledging to put a man on the moon by the end of the 1960s. This goal was, of course, reached in 1969 with the famous landing of U.S. astronauts on the moon.[1]

The Untold Truth Of Tippi Hedren

Alfred Hitchcock, the master of suspense, was known as a director who was exceptionally talented at making frightening movies, but there were times when the reserved British director’s own behavior could be very disturbing to those around him. The claims that actress Tippi Hedren made about the physical and mental trauma she endured on the set of The Birds, as well as aggressive sexual harassment while filming Marnie, were depicted in the 2012 film The Girl.

It was during this turbulent time that Hitchcock gave a tiny replica of Tippi Hedren, inside a miniature coffin, to her six-year-old daughter, future actress Melanie Griffith, as a present. It was a bizarre gift, to say the least, and it is likely that the macabre doll was an expression of the bitterness he felt toward Hedren for rejecting his advances. According to Hedren, he would later take revenge by trying to ruin her career.

Griffith’s daughter, actress Dakota Johnson, commented on the incident during an interview with Vanity Fair. “It’s alarming and dark and really, really sad for that little girl,” Johnson said of her mother. “Really scary.”[2]

One particularly meaningful gift presented to an American president from a British monarch is the Resolute Desk, an elaborate desk with intricate designs given to President Rutherford B. Hayes by Queen Victoria in 1880.

One reason this now famous piece of furniture, prominently featuring a detailed eagle on the front, is so special is because the oak timber it was carved out of was actually salvaged from the British ship, the HMS Resolute. This is the ship the United States had helped search for and rescue from the Arctic Ocean in 1855.[3]

Boston Athenaeum: Welcome to the oldest library in the USA with a book binded in human flesh.

One of the creepiest symbolic gifts of all time was from infamous highwayman James Allen. After being condemned to death in 1837, Allen, who was illiterate, dictated his crime-riddled memoirs to the prison warden with instructions to give a copy to John Fenno Jr., whose accusation of attempted murder had resulted in the highwayman being sentenced to death. The most shocking part is that James Allen actually asked to have his memoirs bound in his own skin. The autobiographical book, bound in the skin from Allen’s hide, was intended to be a sign of his respect for Fenno.

Oddly, it wasn’t that unusual at the time to bind books in human skin, a practice known as anthropodermic bibliopegy. In addition to this volume, which can be found at the Boston Athenaeum library, a number of other human skin-bound books are still in existence, primarily housed at prominent universities like Harvard.[4]

The Godfather – “Luca Brasi sleeps with the fishes.”

The symbolism of some gifts is more obvious than others. The Mafia has a long history of using dead fish to convey the message that a person will “sleep with the fishes” if they ignore a particular warning. This method of communicating threats has often been reflected in pop culture, depicted in movies and TV shows.

One real-life example that received a lot of attention in the media was a 2003 incident when a man was charged with threatening a female reporter. She was working on a story of an alleged mafia link to the actor Steven Seagal, and the man left a dead fish with a rose in its mouth and a one-word note, “Stop,” in her car.[5] 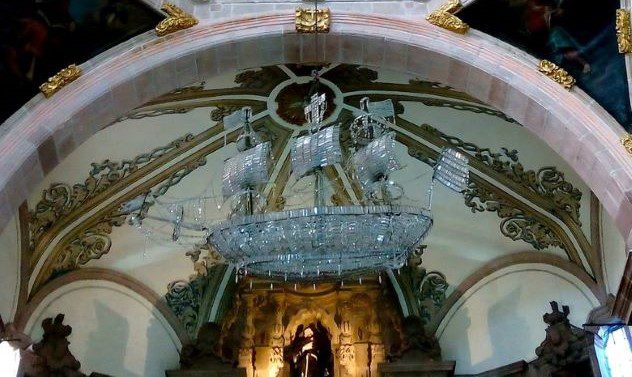 Gifts aren’t always given specifically to a certain individual. Sometimes they are presented to a nation, town, or venue. The Basilica of Guadalupe and Church of San Francisco in San Luis Potosí, Mexico, features a famous pair of ex-votos—a type of tribute in the Roman Catholic Church made in various forms.

These ex-votos take the shape of the caravel, a boat used in Portuguese and Spanish colonial expeditions. Crafted in 1788, probably by Joseph Antonio Otaegui, the legend surrounding these striking works of art is that they were commissioned by sailors who wanted to pay tribute to Saint Francis of Assisi because they believed he had saved them from a shipwreck. After originally being donated to Saint Francis’s church, the caravel chandeliers were eventually moved to their current home, which was considered to be a more appropriate location since it is in the state capital.[6]

The Sword of Stalingrad

One highly symbolic gift was a two-handled longsword with an 18-carat gold hand grip and a hand-forged blade, commissioned by British monarch George VI for Russian leader Joseph Stalin. Presented by Winston Churchill, the elaborate weapon was given to Britain’s WWII ally, the Soviet Union. It was given as a gesture of gratitude for their pivotal 1943 victory in the 5-month-long Battle of Stalingrad, which turned out to be a devastating defeat for the Axis powers that arguably changed the course of the war.

Ironically, the Soviet Union soon became an enemy of the UK and other freedom-loving countries, including the USA, with the onset of the Cold War less than two years after the end of World War II.[7]

3 Replica of the Great Seal of the United States

How Did A Russian Spy Tech Trump The U.S.?

Some gifts are not quite what they seem, especially when it comes from a political adversary, memorably demonstrated with the legendary Trojan horse that concealed a small army. A more recent example is a hand-carved wooden replica of the Great Seal of the United States that was gifted to U.S. Ambassador Averell Harriman by the Vladimir Lenin All-Union Pioneer Organization in 1945.

However, concealed within this symbolic gesture of friendship was an advanced piece of technology for the time—a very thin listening device or “bug.” The listening device did not give off any signal and contained no power supply. It was created by the well-known Russian inventor Leon Theremin. Shockingly, this seal hung in the ambassador’s office for seven years before the device was finally discovered in 1952.[8]

In addition to their beauty, cherry blossoms are also known for their profound symbolism, representing rebirth and the fleeting nature of life. This made the two Japanese weeping cherry trees donated to Union Memorial Hospital in Baltimore by a grateful former patient such an appropriate gift. The really surprising part is that the patient was notorious crime boss Al Capone, once considered Public Enemy No. 1.

When Capone, who had been serving a sentence for tax evasion at Alcatraz, was released early from prison in 1939 due to worsening health, Johns Hopkins University Hospital denied the iconic gangster treatment because they were worried about bad publicity. However, Union Memorial Hospital did agree to treat the syphilitic Capone and was very accommodating during his six-week stay. Not only did the hospital give Capone a two-room suite, but they allowed the presence of his entourage, which included family members, bodyguards, food tasters, and his barber.

Capone was under the care of prominent syphilologist Dr. Joseph E. Moore and, after leaving the hospital, received several weeks of outpatient treatment before returning to his home in Miami the following year.

The trees were a gift “to thank Union Memorial for the compassionate care and medical attention he received.” Although one of the trees was removed in 1950 when a new wing was added, the other tree remains on the campus, and more have been planted from its cuttings. The tree has actually made money for the hospital in recent years. When a 10-foot branch broke off after a heavy snowfall, the wood was carved into decorative crafts used for fundraising.[9]

It’s true that British monarch Henry VIII eventually had his second wife, Anne Boleyn, beheaded, but the two had a lengthy and very romantic courtship while Henry was still married to his first wife, Catherine of Aragon. During the good times, Henry and Anne lavished many extravagant and often intriguing gifts on one another. At Christmas of 1527, Anne gave Henry a miniature gold ship, but the scene inside the ship where a solitary damsel is tossed about makes an interesting point. The reason this trinket was so meaningful is because of what was happening at the time.

Henry was trying to have his marriage to Catherine annulled with plans to marry Anne. Henry’s controversial actions, which eventually led to the English Reformation, put Anne in a difficult and vulnerable position. Ships often represented protection. This gift is a symbol of Anne’s humble submission to Henry’s will, which he refers to in a letter thanking her for the miniature and the diamond attached. In the opinion of historian Dr. David Starkey, this gift would have been a symbol of Anne’s resolution to marry Henry.[10]