Roads seem simple enough. But ancient pathways are anything but. Not only do some of them still exist thousands of years later, but they also lead to fascinating mysteries, stories, and unexpected truths.

From a highway of tombs that kept the living alive to a famous route in the history books that never existed to a mysterious thing Roman roads still do today, here are 10 facts that will make you look twice at the next highway you see! 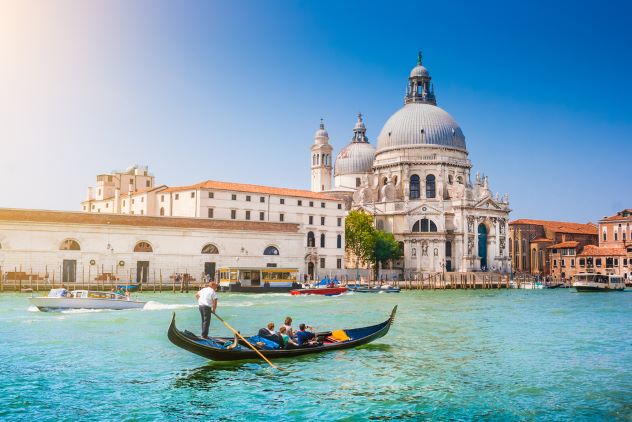 In 2021, archaeologists found an old Roman road at the bottom of the Venetian Lagoon. Sure, these old roads are not always a surprise, given how prolific Roman builders once were. But this pathway helped to confirm a suspicion that went back to the 1980s.

Spanning 3,937 feet (1,200 meters), it predated the founding of Venice and aligned with other Roman structures, including defensive towers, private living quarters, levees-walkways, and a port. This cluster, and the road in particular, confirmed that there had once been a large permanent settlement in the area.

Besides giving strong evidence in that regard, the road also proved that Roman architects didn’t shy away from difficult terrain. Scans determined that the road was constructed on a beach, something that would’ve required a good dose of skill.[1]

9 A Road Built by Pontius Pilate

Recently, archaeologists were excavating an ancient street in Jerusalem when they found several coins underneath the road. Dropped by the original builders, the minting dates showed that the 722-foot (220-meter) tract was constructed when Pontius Pilate was the Roman governor of Judea. As the ruler of the region, the road was almost certainly done on his orders.

The road was likely used by pilgrims traveling to worship at the Temple Mount. How so? Well, the road wasn’t ordinary. It was magnificent. The 2,000-year-old walkway was 26 feet (8 meters) wide and skillfully paved with 11,023 tons (10,000 tonnes) of limestone. The opulent road also linked two of the most sacred sites in Jerusalem—Temple Mount and the Siloam Pool.

It’s not clear why a Roman governor invested so many resources in a lavish road for locals. But considering that the Romans took Jerusalem by force, the sacred road might’ve been a gesture to appease the city’s Jewish residents. Besides improving public relations, the project would’ve nourished Pontius Pilate’s vanity as well. Building a grandiose road was a good way to showcase his wealth and influence.[2]

Easter Island is famous for mysterious statues called “Moai.” But the island has another enigmatic feature—a network of 800-year-old roads. At first, nobody knew what they were for. In 1914, an archaeologist called Katherine Routledge suggested that they were ceremonial. Because Routledge wasn’t well-known, her theory was largely ignored.

In 1958, Norwegian adventurer Thor Heyerdahl published his theory that the roads were solely created to move the Moai statues from the quarry (where they were carved) to their final resting place. As proof, Heyerdahl pointed to statues lying on their backs next to these roads, apparently having been abandoned during transport. Some experts agreed, and as a result, the idea gained popular traction.

But in 2010, archaeologists discovered that all these statues had toppled off a hidden platform. This gave the misleading appearance of abandonment when, in truth, they were at their final destination—just a little worse for wear.

Katherine Routledge was likely right after all. The roads were concave, a feature that would’ve made moving the massive statues along them quite difficult. The paths also lead to a sacred volcano, adding to their spiritual significance.[3]

7 A Road Leads to Stonehenge

So many people have visited Stonehenge, they must’ve beaten a path straight to the monument by now! But the road in question isn’t a modern feature. It was made by the creators of Stonehenge. Since the pathway is now below the grass line, it has remained largely unknown to the public. Archaeologists, however, have known about the road for some time and refer to it as the “avenue.”

But there was a problem. Nobody could say for sure where the road went. Did the builders merely pave a path that led past the monument, leading somewhere else, or did it lead to Stonehenge? It was hard to tell because a modern road was constructed across the delicate older pathway, partially destroying it in the process.

In 2021, researchers dismantled the new road and discovered new features that revealed more about the ancient earthwork. The avenue was about 98 feet (30 meters) wide and did indeed lead to Stonehenge—this part ran straight for approximately 0.3 miles (0.5 kilometers). From there on, the winding road ran 1.5 miles (2.4 kilometers) to the Avon River near the village of Amesbury.[4]

6 Roman Roads Do Something Strange

Ancient Rome’s Road System: The Rise and Fall of Rome

Around 2,000 years ago, when the Romans built their now-famous roads, the purpose of these networks was to help their troops move swifter from one place to another. Eventually, many of these roads started to cluster around prosperous towns and cities. This wasn’t unusual. The more affluent a settlement became, the more people visited, and additional roads would’ve handled the increase in traffic.

Then the Roman Empire disappeared, along with many of its roads. Considering that centuries passed and the landscape changed dramatically, experts thought it was a safe assumption that Roman highways and modern financial hubs had no connection. But these roads do something mysterious today. They continue to cluster around comparatively wealthy areas, even the pathways that are long gone.

In 2022, a new study showed that the ancient roads appeared so consistently around modern financial centers that only one thing could explain it. There was a connection. Most likely, the profits that had arrived via these pathways influenced later settlements, towns, and cities to stay in the area.[5]

5 A Road Used to Conquer a City

In Mexico’s Yucatán Peninsula, a road stretches for 62 miles (99.7 kilometers). At the time of its construction (AD 700), it was the longest road in the region. It was recently discovered and dubbed the “white road,” thanks to the reflective limestone paving that would’ve made the pathway visible to warriors even at night. Speaking of soldiers, researchers believe that the road was probably built by a warrior queen called Lady K’awiil Ajaw, who ruled the Maya city of Cobá.

She was known to go on expeditions to conquer more land, and the road appeared to have been built to seize a distant city called Yaxuná. Indeed, the white road begins at Cobá and leads straight to Yaxuná. By seizing control of the city, the queen would’ve cemented her ownership of the peninsula. The road wasn’t a rushed, slapdash affair, either. Archaeologists hail the level of engineering as a marvel on par with the Mayan pyramids.[6]

About 1,400 years ago, a Maya village called Ceren was celebrating. The people were preparing the main temple for a ritual when a nearby volcano erupted and covered Ceren so completely with ash that it turned into a frozen time capsule. When it was discovered in 2011 in modern-day El Salvador, researchers found half-eaten food and all the villagers’ belongings. But there were no bodies.

The settlement had a type of raised road called a sacbe. Since it ran past the temple and headed out of the village, it gave the 200-plus population of Ceren the opportunity to quickly evacuate toward the south, away from the plumes of volcanic ash that came from the north and ultimately billowed throughout the village.

Apart from possibly saving all the people, the road was also unique. All sacbe roads discovered thus far have an outer layer of stones. But in an ironic twist, the Ceren road was made of ash. This proved, for the first time, that the Maya didn’t exclusively rely on stone casings to build these roads.[7]

3 A Highway of Graves

Who Are The Bedouin Nomads Of The Middle East?

These days, when you have to travel long-distance by car, highways are the best way to do it. Such routes are flanked by small towns, gas stations, and rest stops. Rarely will you spot a graveyard next to a highway. But thousands of years ago, in ancient Arabia, when the Bedouin people had to move from one oasis to another, surviving the journey through the arid landscape often meant following their dead.

In 2022, archaeologists revealed the discovery of an unusual network of highways. About 4,500 years ago, the Bedouins traveled along roads that were lined with burial chambers. Carved from stone, the tombs helped people to either find the highways (in such cases, the pendant-like structures pointed toward the nearest road), while other graves stood like road signs along the path, clearly showing the way to the next water source.

Interestingly, the tombs also told travelers how far the next oasis was. The closer a road was to water, the more concentrated the graves became. These funerary highways were so successful that people could traverse about 330 miles (530 kilometers) without dying of thirst.[8]

In Jordan, a long road snakes through mountains and valleys. Called the King’s Highway, it’s famously mentioned in the Bible when Moses requested permission from the King of Edom to use the road to travel through his land. The highway has also been in continuous use since the eighth century BC.

The road has a modern-looking tarmac and accommodates vehicles, bicycles, and pedestrians. But back in the day, it served as a crucial link that connected several kingdoms, including Ancient Egypt, Arabia, the Red Sea, and the Fertile Crescent. For thousands of years, pilgrims, merchant caravans, soldiers, and kings used the road to travel north to south through Jordan’s highlands.

Today, tourists can travel the 154-mile (250-kilometer) highway and enjoy an array of important historical sites that are linked by this remarkable road. Just some of them include Roman ruins, Crusader castles, the ancient city of Petra, Byzantine churches, an Umayyad palace, ancient towns, and the UNESCO World Heritage Site of Umm ar-Rasas.[9]

How did The Silk Road Actually Work?

History books are packed with factual information about the Silk Road, so how can China’s most famous trade route be a myth? To be fair, people probably did trade along this road, and yes, that comes across as contradictory. Perhaps, instead of claiming that the Silk Road was a figment of somebody’s imagination, it might be more accurate to say that it was very different from what most people believe.

According to historians, this road connected China to the world. Almost vein-like, the 4,000-mile (6,437-kilometer) network spread far and wide, allowing the Chinese to part with their finest silk and other valuables. The truth is that China didn’t export silk during this time, nor did they engage in foreign trade. They didn’t even call it the Silk Road. Additionally, far from being an easy way to travel, the road was badly maintained, impassable, and remained largely unused.[10]