It is another movie list, but this is one with a difference. In this list I have selected various aspects of film making and chosen the best of the best. For example, the best actor in history, the best actress in history. I am sure that there will be some disagreement with my choices, but you are welcome to comment and tell me what you think. 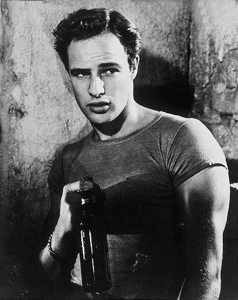 Marlon Brando is widely considered the greatest movie actor of all time, rivaled only by the more theatrically oriented Laurence Olivier in terms of esteem. No actor ever exerted such a profound influence on succeeding generations of actors as did Brando. More than 50 years after he first scorched the screen as Stanley Kowalski in the movie version of Tennessee Williams’ A Streetcar Named Desire (1951) and a quarter-century after his last great performance as Col. Kurtz in Francis Ford Coppola’s Apocalypse Now (1979), all American actors are still being measured by the yardstick that was Brando. Brando eclipsed the reputation of other great actors circa 1950, such as Paul Muni and Fredric March. Only the luster of Spencer Tracy’s reputation hasn’t dimmed when seen in the starlight thrown off by Brando. However, neither Tracy nor Olivier created an entire school of acting just by the force of his personality. Brando did.

Get the best of Marlon Brando, including A Streetcar Named Desire, when you buy TCM Greatest Classic Legends Film Collection: Marlon Brando at Amazon.com! 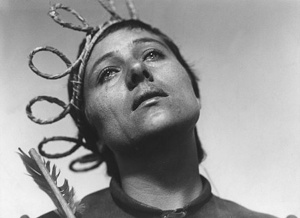 A noted stage actress for many years, Falconetti is best known for The Passion of Joan of Arc (1928). It is considered by some historians to have been the single greatest performance ever put on film. Born in Sermano, Corsica, Falconetti became a stage actress in Paris in 1918. By the time that director Carl Dreyer saw her act in amateur theater and selected her as his leading lady in his up-and-coming production La Passion de Jeanne d’Arc, she was already a celebrated stage artiste, and had appeared in one film, La Comtesse de Somerive (1917), directed by Georges Denola and Jean Kemm. Her portrayal of Joan of Arc in La Passion is widely considered one of the most astonishing performances ever committed to film, and it would remain her final cinematic role. You can watch this complete film on the Top 10 Brilliant Complete Movies Online. 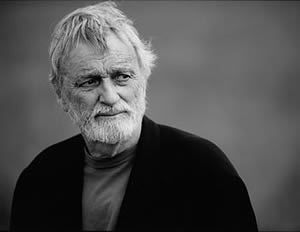 Born in Tahiti, the son of writer James Norman Hall, author of “Mutiny on the Bounty,” Conrad Hall studied filmmaking at USC. He and two classmates formed a production company and sold a project to a local television station. Hall’s company branched out into making industrial films and TV commercials. They were hired to shoot location footage for several feature films, including’s Disney’s The Living Desert (1953). In the early 1960s, Hall was hired as a camera assistant on several features and worked his way up to camera operator. He received his first cinematographer credit in 1965. Hall won acclaim for his rich and complex compositions, especially for In Cold Blood (1967) and won an Academy Award for Butch Cassidy and the Sundance Kid (1969). He won two more Oscars, for American Beauty (1999), in 2000, and Road to Perdition (2002). 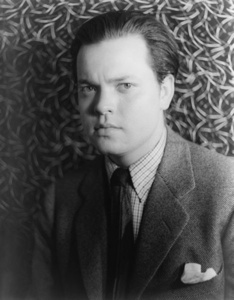 Orson Welles was gifted in many arts (magic, piano, painting) as a child. When his mother died (he was nine) he traveled the world with his father. When his father died (he was fifteen) he became the ward of Chicago’s Dr. Maurice Bernstein. Recommendations by Thornton Wilder and Alexander Woollcott got him into Katherine Cornell’s road company, with which he made his New York debut as Tybalt in 1934. The same year he married, directed his first short, and appeared on radio for the first time. His first film to be seen by the public was Citizen Kane (1941), a commercial failure losing RKO $150,000, but regarded by many as the best film ever made. Many of his next films were commercial failures and he exiled himself to Europe in 1948. In 1956 he directed Touch of Evil (1958); it failed in the U.S. but won a prize at the 1958 Brussels World’s Fair. In 1975, in spite of all his box-office failures, he received the American Film Institute’s Lifetime Achievement Award, and in 1984 the Directors Guild of America awarded him its highest honor, the D.W. Griffith Award. His reputation as a film maker has climbed steadily ever since. 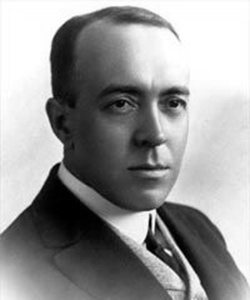 Winner: Cedric Gibbons
Notable Movies: The Wizard of Oz, Pride and Prejudice, An American in Paris

After graduating from New York’s Art Students League he worked for his architect father, then started film work at Edison Studios in 1915 assisting Hugo Ballin. In 1918 he moved to Goldwyn as art director and, in 1924, began his 32 year stint as supervising art director for some 1500 MGM films, with direct responsibility in well over 150 of those. He designed the Oscar itself, winning it 11 of the 37 times he was nominated for it. Some of his designs influenced American interiors, and it has been argued that he was the most important art director in the history of American cinema.

Read all about the most magnificent people in movie making with 85 Years of the Oscar: The Official History of the Academy Awards at Amazon.com! 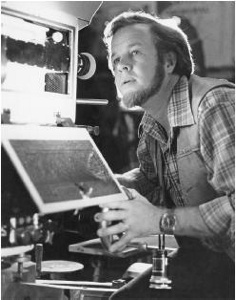 Legendary filmmaker and visual effects pioneer, Douglas Trumbull, was one of the Special Photographic Effects Supervisors for 2001: A Space Odyssey (1968). He went on to become the Visual Effects Supervisor for such classics as Close Encounters of the Third Kind (1977), Star Trek: The Motion Picture (1979), and Blade Runner (1982), each of which earned him an Academy Award nomination for Best Visual Effects. He is the recipient of an Academy Award in the area of Scientific and Technical Achievement, as well as the International Monitor Award and American Society of Cinematographers’ Lifetime Achievement Award for his outstanding contributions in the field of filmmaking. The majority of the completed cinema projects that Trumbull has been associated with have come to be recognised as classics, gaining audiences over time. Brainstorm predicted the fascination of virtual reality while Silent Running reflected the emerging ecology movement of the early 1970s, and is today regarded as a science fiction classic. 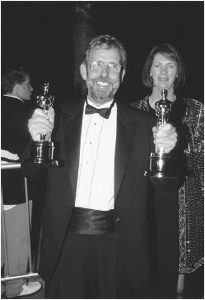 Walter Murch has been editing sound in Hollywood since starting on Francis Ford Coppola’s film “The Rain People” (1969). He edited sound on “American Graffiti” (1973) and “The Godfather Part II” (1974), won his first Academy Award nomination for “The Conversation” (1974), won his first Oscar for “Apocalypse Now” (1979), and won an unprecedented double Oscars for sound and film editing for his work on “The English Patient” (1996). Most recently he helped reconstruct “Touch of Evil” to Orson Welles original notes, and edited The Talented Mr. Ripley. Mr. Murch has directed — Return to Oz (1985) — and longs to do so again, but as an editor and sound man he is one of the few universally acknowledged masters in his field. For his work on the film “Apocolypse Now”, Walter coined the term “Sound Designer”, and along with colleagues such as Ben Burtt, helped to elevate the art and impact of film sound to a new level. 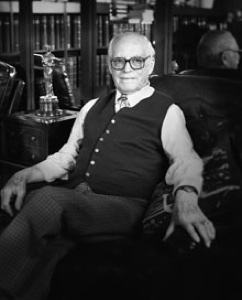 Frank Capra called William Hornbeck “the greatest film editor in the history of motion pictures,” and in a 1977 poll 100 of his peers named Hornbeck the best editor in the film industry, two great compliments for a man relatively unknown to most filmgoers. In a tribute to Hornbeck after his death, the Academy of Motion Picture Arts and Sciences distributed a program note that said, “If William Hornbeck had been anything other than a film editor, he would have been proclaimed by the world at large to be what his associates always knew him to be—a true Hollywood legend.” Although the general public is not familiar with his name and few film books refer to him, he was unquestionably one of the true pioneers of his chosen field of film editing. Hornbeck’s career is remarkable for its influence and longevity. The Hornbeck style was eclectic and flexible. (“If you had rules for editing,” he said, “you could put it in a book and anyone could become an editor.”) His editing technique is simple: it serves its story, and the intent of the director, according to what is most appropriate; it is superbly crafted; it is humanistic in tone. Two films Hornbeck cut for George Stevens, Shane and A Place in the Sun, illustrate these tendencies. 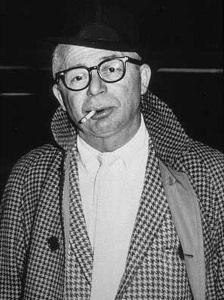 Billy Wilder broke into films as a screenwriter in 1929, and wrote scripts for many German films until Adolf Hitler came to power in 1933. Wilder immediately realized his Jewish ancestry would cause problems, so he emigrated to Paris, then the US. Although he spoke no English when he arrived in Hollywood, Wilder was a fast learner, and thanks to contacts such as Peter Lorre (with whom he shared an apartment), he was able to break into American films. His partnership with Charles Brackett started in 1938 and the team was responsible for writing some of Hollywood’s classic comedies, including Ninotchka (1939) and Ball of Fire (1941). He is regarded as one of the most brilliant and versatile filmmakers of Hollywood’s golden age. Many of Wilder’s films achieved both critical and public acclaim. He won 7 academy awards and was nominated 15 times. 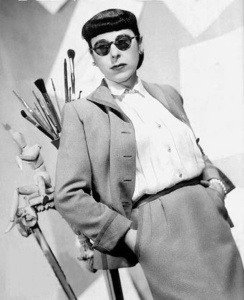 Edith Head’s 35 Oscar nominations and 8 awards make her both the most honored costume designer and woman in Academy Award history to date. A photograph of Miss Head working on a dress design appears on one stamp of a sheet of 10 USA 37¢ commemorative postage stamps, issued 25 February 2003, celebrating American Filmmaking: Behind the Scenes. The stamp honors costume design. She was responsible for some of the best-known Hollywood fashion images of her day, with her costumes being worn by the most glamorous and famous actresses in films seen by millions. Head’s influence on world fashion was far reaching, especially in the 1950s when she began appearing on Art Linkletter’s television program and writing books on fashion. Despite her own accomplishments, she also had a reputation for taking credit for others’ work — but in the studio days a department head not uncommonly claimed credit for everything in her department.