Alfred Hitchcock was an iconic and highly influential British-born film director and producer who pioneered many techniques in the suspense and thriller genres. Hitchcock was among the most consistently successful and publicly recognizable world directors during his lifetime, and remains one of the best known and most popular of all time. This is a list of his ten greatest films. From good to great: 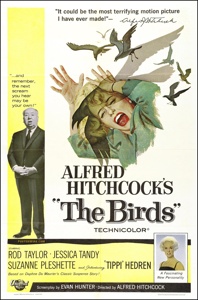 Spoilt socialite and notorious practical joker Melanie Daniels is shopping in a San Francisco pet store when she meets Mitch Brenner. Mitch is looking to buy a pair of love birds for his young sister’s birthday; he recognises Melanie but pretends to mistake her for an assistant. She decides to get her own back by buying the birds and driving up to the quiet coastal town of Bodega Bay, where Mitch spends his weekends with his sister and mother. Shortly after she arrives, Melanie is attacked by a gull, but this is just the start of a series of attacks by an increasing number of birds.

Admire the man behind the camera with this awesome Alfred Hitchcock The Birds Classic Poster at Amazon.com! 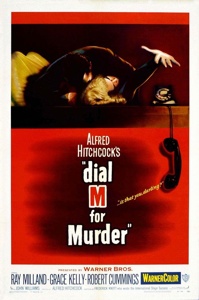 Ex-tennis pro Tony Wendice decides to murder his wife for her money and because she had an affair the year before. He blackmails an old college associate to strangle her, but when things go wrong he sees a way to turn events to his advantage. 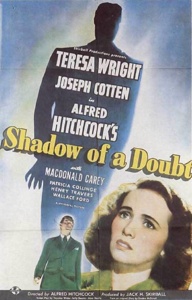 Charlie Oackley is the “Merry Widow Murderer”, an evil strangler who seduces and kills rich widows. In order to be safe from the police he is going to his sister Emma who lives with her husband, Joseph Newton and her daughter Charlie. A detective is on the killer’s track and arrives at the Newton’s too, but before he can discover the truth, one of the suspected murderers dies in an accident and the police considers the case solved. Charles seems to be safe, but Charlie suspects him. 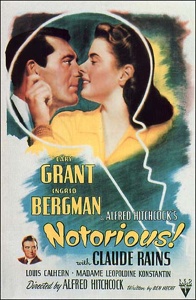 Alicia Huberman is a frivolous girl who loves drinks and men; her father was a German spy in USA and he has committed suicide in prison. Government agent Devlin asks the girl to spy on a group of her father’s Nazi friends in Rio de Janeiro; this could be her chance to clean her guilty name. The girl falls in love with the agent, but he seems not to be attracted by the life she is living. Alicia accepts the duty and she goes to Brazil with Devlin. The agent suggests Alicia should marry the spy and gain free access into his house, so she does. During a party, Alicia and Devlin find some uranium dust hidden in Sebastian’s canteen, but now he has discovered Alicia is a spy and he starts poisoning her day after day. 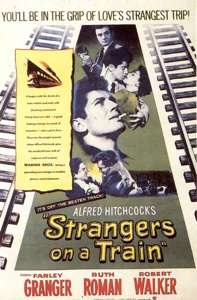 Tennis star Guy Haines meets a stranger on the Washington-to-New York train who offers to exchange murders. The stranger, Bruno Anthony, will kill Guy’s estranged wife if Guy will kill Bruno’s hated father. Guy doesn’t take Bruno seriously until his wife, Miriam, is found murdered in an amusement park. Guy becomes the chief suspect, which threatens his tennis career, his romantic involvement with a U.S. senator’s daughter, Anne Morton, his hopes for a political career, and even his life. When it becomes evident to Bruno that Guy isn’t going to kill his father, he tells Guy he intends to establish Guy’s guilt conclusively by planting his monogrammed cigarette lighter on the island where Miriam was murdered. With Anne’s help, Guy attempts to stop Bruno after rushing through an important tennis match and racing to the amusement park.

The man is a legend. You can show it proudly by getting a Hitchcock “THING” Black T-Shirt at Amazon.com! 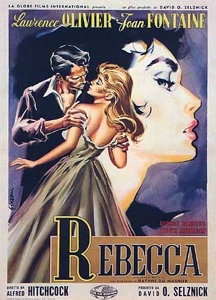 A shy ladies’ companion, staying in Monte Carlo with her stuffy employer, meets the wealthy Maxim de Winter. She and Max fall in love, marry and return to Manderlay, his large country estate in Cornwall. Max is still troubled by the death of his first wife, Rebecca, in a boating accident the year before. The second Mrs. de Winter clashes with the housekeeper, Mrs. Danvers, and discovers that Rebecca still has a strange hold on everyone at Manderlay. 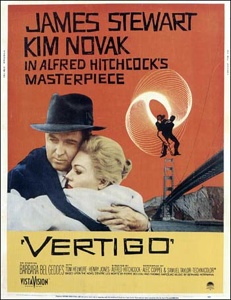 John “Scottie” Ferguson is a retired San Francisco police detective who suffers from acrophobia and Madeleine is the lady who leads him to high places. A wealthy shipbuilder who is an acquaintance from college days approaches Scottie and asks him to follow his beautiful wife, Madeleine. He fears she is going insane, maybe even contemplating suicide, because she believes she is possessed by a dead ancestor. Scottie is skeptical, but agrees after he sees the beautiful Madeleine. 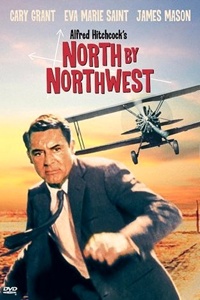 Middle-aged Madison Avenue advertising executive Roger O. Thornhill is mistaken for a government agent by a gang of spies. He gets involved in a series of misadventures and is pursued across the States by both the spies and the government whilst being helped by a beautiful blonde. 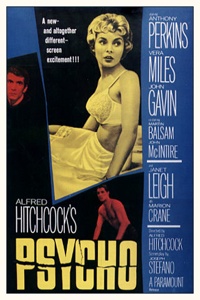 Marion Crane is a Phoenix, Arizona working girl fed up with having to sneak away during lunch breaks to meet her lover, Sam Loomis, who cannot get married because most of his money goes towards alimony. One Friday, Marion’s employer asks her to take $40,000 in cash to a local bank for deposit. Desperate to make a change in her life, she impulsively leaves town with the money, determined to start a new life with Sam in California. As night falls and a torrential rain obscures the road ahead of her, Marion turns off the main highway. Exhausted from the long drive and the stress of her criminal act, she decides to spend the night at the desolate Bates Motel. The motel is run by Norman Bates, a peculiar young man dominated by his invalid mother. After Norman fixes her a light dinner, Marion goes back to her room for a shower…. 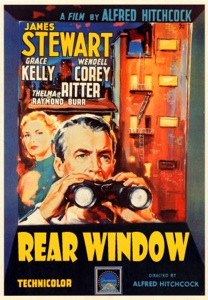 Professional photographer L.B. “Jeff” Jeffries breaks his leg while getting an action shot at an auto race. Confined to his New York apartment, he spends his time looking out of the rear window observing the neighbours. He begins to suspect that the man opposite may have murdered his wife. Jeff enlists the help of his society model girlfriend Lisa Freemont and his nurse Stella to investigate.

If you are interested in all of these films, you can purchase the complete Alfred Hitchock Signature Collection.