For the sake of your reading pleasure I have tried to balance the scary (jump-worthy even) with the eerie (sinister and uncomfortable). A list like this can’t be ranked so you get it in the order of my preference. Use the comments at the bottom of the list to add your own favorite moments; who knows, maybe it will end up on a sequel list!

Imagine the screen directions: “smile”. So innocuous. So simple. And yet . . . in an early scene of Mulholland Drive, David Lynch shows us that two boomers smiling can be one of the most unsettling things you’ll see all day—at least until they re-appear later in the film in an equally weird (but more disturbing) scene! I never really did understand the point of this scene (can someone let me in on the secret in the comments maybe?). Anyway—David Lynch is awesome and this is a must-see movie.

The Sixth Sense was a great film with some amazing acting from Toni Collette. Two years later he followed it with Signs staring the indomitable Mel Gibson and the brilliant Joaquin Phoenix. The scene here is one of the most paused in movie history: and not for no good reason. Joaquin’s reaction? Yup: that’s pretty much how the entire planet reacted upon seeing this scene. On Youtube with a pause button it loses some of its creepiness, but M. Night Shyamalan did a brilliant job of placing it where he did in the movie and the effect upon first seeing it definitely ranks it as a top 10 creepy moment. 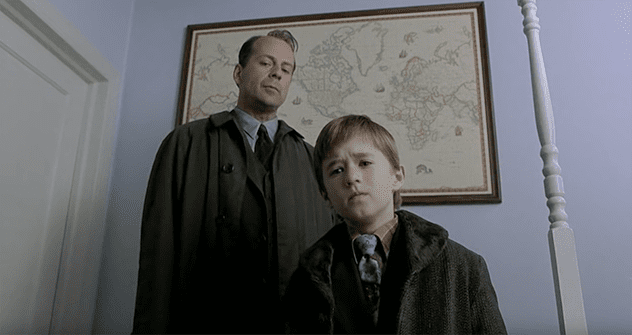 Speaking of M. Night Shyamalan, did you soil yourself when you first saw this scene from the Sixth Sense? I sure as hell did. This film really is special: it takes a real-life horror concept (münchausen-by-proxy) and puts it into a classic ghost story with a heck of a twist. The director is great but he has never quite managed to attain the same level of awesome as he did with this movie. Embedding of clips from this movie seem to be disabled universally, so if you want to check out this jump scene, here you go.

Zodiac is a brilliant movie that anyone who loves serial killer lore needs to see. If you haven’t already, watch it today (and skip the clip above until you have). In the creepy scene, the character played by Jake Gyllenhaal thinks he is onto a lead and has a movie poster that he thinks reveals the killer’s identity. He visits a man he thinks can help him find the man who drew the poster because the writing appears to be a match for the killer. Now watch the clip: you won’t be disappointed. This scene, and the few moments thereafter in the basement are some of the most intensely uncomfortable I have experienced watching a film. In my eyes, the director (David Fincher) can do no wrong.

6 The Blair Witch Project—Guy In Corner

It turns out the people behind Blair Witch only needed a handheld camera and a hell of a good propaganda campaign in which audiences were led to believe that the film was based on real footage to get one of the scariest movies ever: involving no horror movie trickery such as bursts of sound to scare you. The final climax of the film is simply the scene above. If you haven’t seen the movie in its entirety you may not appreciate this scene, as it really needs the full length of slowly building tension to truly creep you out.

5 Silence Of The Lambs—Night Vision

If you thought the few minutes in the basement in Zodiac were awesomely creepy: you’ll love this scene! Here we see FBI agent Starling at the home of the man we know to be the killer. He lives in a veritable horror museum and clearly doesn’t bother with the services of a cleaner. The house is a mess, it is dark, and Starling is way out of her league. And then begins a game of cat and mouse in the dark and only the killer can see. . . Look out for that hand! Silence Of The Lambs it a horror movie everyone has to see.

I suspect this is the one that almost everyone reading will have seen. This scene of the alien bursting forth from a human chest horrified audiences when it was first released. It was totally new and unexpected. I recently re-watched the entire series of movies and even after all these years I had to watch this part with my eyes closed.

OMFG—it doesn’t matter how many times I watch this movie, that last scene still gets me. Carrie is one of the truly great horror movies—and while it has a special place in my heart because it is the first horror I ever saw, it is genuinely well made and well acted. This scene I have chosen is really the one that most stylistically reflects the type of horrors we see today. Whilst most of Carrie was about her preternatural powers, this scene gives us a dose of the supernatural. Please don’t watch the new Carrie film from a few years ago: this oldie is the one to see.

If you’ve been reading all the comments on the lists recently you will have probably seen me mention this scene. I rarely see horror movies at the cinema but on this occasion I did. I was sitting in the crowded theater which, despite being full was sitting in total silence. The film got to the clip shown above. At just the moment you would expect, the loudest and highest pitched scream issued forth from deep within me and I physically lifted from my seat. I didn’t just scare the entire place: I scared myself. Thankfully screaming like a teenaged girl in a movie is not something I do frequently—particularly given that I am over six foot tall and have a fairly deep voice! Watch the scene . . . try not to scream!

SPOILER ALERT: this scene above has spoilers for a particular scene in the film. If you haven’t seen the movie, the clip will spoil a big part of it. And whether or not you have seen it, it will spoil your life. This is only included on a list of oddly creepy scenes because it is entirely unique in the history of horror movies. But it is not just unnerving—it is outright horrifying, brutal, gruesome, violent, and disturbing. Do not watch this video. You’ll regret it. The guy driving has since stated that taking part in this film has given him post traumatic stress disorder.

For more movie lists like this, check out 10 Crazy Theories About Popular Horror Movies, and 10 Historic Events That Are Creepier Than A Horror Movie