I think you would be hard pressed to find anyone alive in Western society that has not seen a James Bond film. In fact, most people seem to have an opinion on who the best Bond was, and which was the best Bond film. So, here is our take on the top 10 James Bond movies of all time. 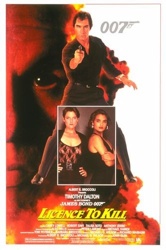 After Bond’s American friends are attacked by Franz Sanchez (Robert Davi), a drug lord seeking revenge for a drug bust, Bond (Timothy Dalton) wants payback and quits MI6. Bond becomes a rogue agent and, with the assistance of Pam Bouvier (Carey Lowell), tracks down Sanchez to South America to assassinate him.

This movie has unjustly received bad criticism. This film is dark and humorless, unlike other Bond films, but Timothy Dalton managed to perfectly convey what Ian Fleming originally intended to do with the character: portray a cold-blooded professional killer. 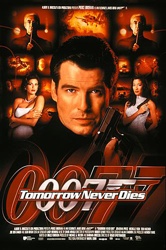 When a British warship is mysteriously destroyed in Chinese waters, the world is on the brink of World War III, until 007 (Pierce Brosnan) zeros in on the true criminal mastermind of the attack. Bond’s do-or-die mission takes him to Elliot Carver (Jonathan Pryce), a dominant industrialist who easily manipulates world events. After soliciting help from Carver’s sexy wife, Paris (Teri Hatcher), Bond joins forces with a stunning yet lethal Chinese agent, Wai Lin (Michelle Yeoh), in a series of chases, vicious confrontations and magnificent escapes as they race to stop Carver’s plan of global pandemonium. 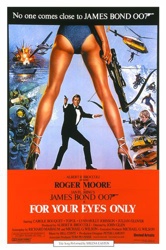 A British spy ship accidentally sinks with a secret weapons system on board. James Bond (Roger Moore) and the Russians are both out to salvage the device in the depths of the Atlantic Ocean. To assist Bond in his quest, which takes him to locales like Italy and Greece, Bond teams up with Melina Havelock (Carole Bouquet), whose parents were assassinated by a spy working for the Soviets.
After the silliness of Moonraker (1979), it’s nice to see Roger Moore being serious for once. He makes this film one of the most realistic films in the series. The gadgets are all believable and the action sequences are somewhat sane. 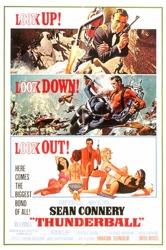 In a bold scheme, an evil organization called SPECTRE hijacks a NATO plane and seizes two atomic warheads, each capable of killing millions of people. As the world is held hostage by the threat of a total apocalypse, James Bond (Sean Connery) jumps into action, racing against the clock as the evidence leads him to tropical nation of Nassau. There he meets Emilio Largo (Adolfo Celi), a distinguished agent of SPECTRE, and the beautiful Domino (Claudine Auger), whom Bond is immediately attracted to. The confrontation builds to an epic battle on the ocean floor, as Bond and his allies fight to avert the catastrophe. His mission leads him from a perilous jet-pack flight to a terrifying clash with Largo’s killer sharks. Interestingly, this film is not without controversy amongst Bond aficionados as to whether or not Bond maneuvers Fiona Volpe into the path of a SPECTRE gunman’s bullet. This film was remade in 1983 as an unofficial Bond film; the remake also featured Sean Connery as Bond. A NATO and a Soviet submarine vanish in the middle of the ocean and a crazed megalomaniac living under the sea has the technology to track the two submerged vessels. After some initial squabbling, Bond (Roger Moore) must join forces with KGB agent Anya Amasova (Barbara Bach). Traveling from Egypt to the Alps, they will have to face the frightening Jaws (Richard Kiel).

You can really feel Roger Moore coming into his own in his third Bond outing. There’s just the right balance of political conflicts and over-the-top action to make this a truly great 007 film. James Bond (Pierce Brosnan) is out to stop a criminal organization from stealing codes to a Russian electromagnetic known as “Goldeneye”. With the help of computer programmer Natalya Siminova (Izabella Scorupco), he must stop assassin Xenia Onatopp (Famke Janssen) and her boss, who is Bond’s former colleague.

In this film, Brosnan proves he has the necessary charisma to be an exceptional 007. The movie includes some good acting with some amazing action scenes 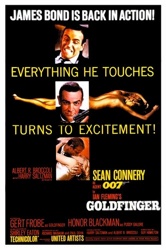 The Bank of England has discovered that someone is stockpiling enormous amounts of gold, and James Bond (Sean Connery) is sent to investigate. Gold dealer Auric Goldfinger (Gert Frobe) becomes the prime suspect. With the help of Oddjob (Harold Sakata) and Pussy Galore (Honor Blackman), Goldfinger plans on raiding Fort Knox.

Many consider this to be one of the best Bond movies, and it’s a classic in its own right. Although it contains one of the greatest villains in movie history, the plot is very unbelievable and the film seems lacking at parts. James Bond’s first “007” mission leads him to Le Chiffre (Mads Mikkelsen), banker to most of the world’s terrorists. In order to stop him, and bring down the terrorist network, Bond must beat Le Chiffre in a high-stakes poker game at Casino Royale. Bond is primarily irritated when a beautiful British Treasury official, Vesper Lynd (Eva Green), is assigned to watch over the government’s money during the game. But, as Bond and Vesper survive a series of lethal attacks by Le Chiffre and his henchmen, an attraction develops between them that might later endanger the mission.

This Bond, like the one in the novels, gets angry, makes mistakes, is tough, loves women, is gifted at killing and yet doesn’t like it.  The producers got it right when they brought Bond back without the gadgets, and the infallibility of Brosnan. 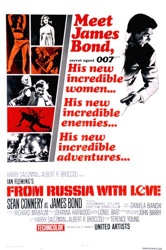 The leader of SPECTRE wants revenge against James Bond (Sean Connery) for killing Dr. No. Bond is lured to Istanbul, where he thinks a Russian operative has a cipher machine for him. Along with Tatiana Romanov (Daniela Bianchi), 007 has to avoid the assassins while trying to steal the cipher machine.

This second movie in the series is slow-paced but very realistic. This film marks the first appearance of Q and his famed gadgets, which will be prominent in the series. The plot is easy to follow and always fun to watch. Bond (Sean Connery) is sent to Jamaica to find out the mystery behind a fellow secret agent’s murder. He discovers that the death is linked to an energy wave that is able to interfere with U.S. missile launches. With the gorgeous Honey Ryder (Ursula Andress), he soon discovers that a madman known as Dr. No has plans for world domination.

Sean Connery’s portrayal of the role launched his career into stardom. He’s very callous and tough in the film, but never without humor. This film was extremely successful, and even though the title sequence and gadgets hadn’t made an appearance yet, it should still be recognized as the movie that started it all.

10 Sci-Fi Short Films That Will Give You The Creeps