Woody Allen is one of the most respected and prolific filmmaker in modern times. Allen draws heavily on literature, philosophy, psychology, Judaism, European cinema and New York City, where he was born and has lived his entire life. Some might consider his films an acquired taste, but no one can deny that he is brilliantly witty. Here is a list of 25 of his finest quotes (taken from his own life or screenwriting). 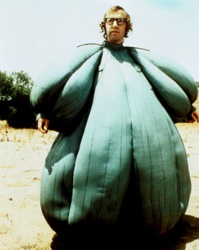 1. Harvard makes mistakes too, you know. Kissinger taught there.

2. He was so depressed, he tried to commit suicide by inhaling next to an Armenian.

3. As the poet said, ‘Only God can make a tree,’ probably because it’s so hard to figure out how to get the bark on.

4. I am thankful for laughter, except when milk comes out of my nose.

5. I am not afraid of death, I just don’t want to be there when it happens. 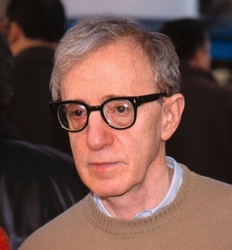 6. I believe there is something out there watching us. Unfortunately, it’s the government.

7. I don’t have to ‘freedom-kiss’ my wife when what I really want to do is French-kiss her.

9. I have bad reflexes. I was once run over by a car being pushed by two guys.

10. I took a speed-reading course and read War and Peace in twenty minutes. It involves Russia 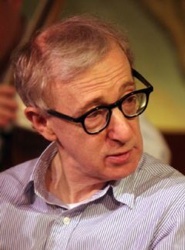 11. I was nauseous and tingly all over. I was either in love or I had smallpox.

12. I’d call him a sadistic, hippophilic necrophile, but that would be beating a dead horse.

13. I’m astounded by people who want to ‘know’ the universe when it’s hard enough to find your way around Chinatown.

14. I’m such a good lover because I practice a lot on my own.

15. I’m very proud of my gold pocket watch. My grandfather, on his deathbed, sold me this watch. 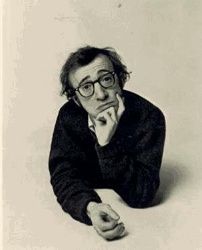 16. If my films make one more person miserable, I’ll feel I have done my job.

17. In Beverly Hills… they don’t throw their garbage away. They make it into television shows.

18. Life is full of misery, loneliness, and suffering – and it’s all over much too soon.

20. My one regret in life is that I am not someone else. 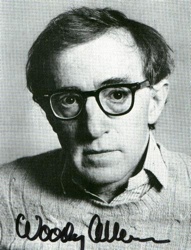 21. Some guy hit my fender, and I told him, ‘Be fruitful and multiply,’ but not in those words.

22. There are worse things in life than death. Have you ever spent an evening with an insurance salesman?

23. What if everything is an illusion and nothing exists? In that case, I definitely overpaid for my carpet.

24. When I was kidnapped, my parents snapped into action. They rented out my room.