At one time people would have laughed if you had told them comic books were legitimate literature. Thankfully this narrow minded view has not only changed but reversed with modern day historians, many of whom have not only recognized comics and graphic novels as legitimate art forms, but have applauded many works as great examples of literature in general. This new recognition has spurred a boom in the mainstream acceptance of comics and graphic novels in Hollywood and in classrooms, libraries, and book stores nation wide.

In truth, there are more examples of good, solid, legitimate literature than we can hope to cover here, but for enquiring minds, or perhaps those new to the medium here is a top ten list (in no particular order) of just a few works that any fan of good writing, no matter the format, can appreciate. 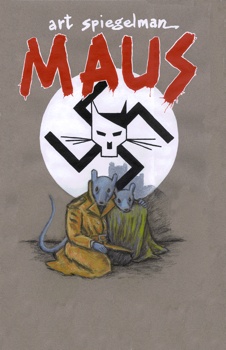 The Premise – a moving biographical tale about the stories of Spiegelman’s father Vladek. The story follows the life of Vladek Spiegelman as a Jew in 1930’s Europe, ultimately being captured by the Nazi’s in World War Two and living in a Nazi concentration camp during the Holocaust. Gripping and moving the story shows many dark sides to humanity. Spiegelman shows a stroke of genius by using cartoon animals as the characters instead of human beings. Each ethnic race is portrayed as a different animal. Jews are portrayed as mice, German’s as cats, Americans as dogs, and more. Pay close attention because there is a lot of hidden meaning behind these characterizations. I thoroughly enjoyed the honesty of the story and the realistic characterization on the part of Mr. Speigelman, especially in the portrayal of his father, who although is the protagonist is shown to be real person who is flawed just like everyone else.

9. The Spirit Will Eisner 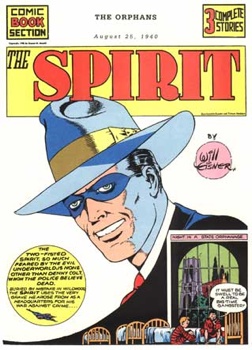 The Premise – A dark and daring detective created by Will Eisner in 1940. Originally begun as a newspaper strip The Spirit quickly caught on and remains popular today, in most cases in reprints of Eisner’s original work from the 40’s – 60’s. There are several collected Spirit trades now available on the market, such as “The Spirit Archives” which now consists of over 20 volumes. What really makes this stand out is that The Spirit is considered to be the classic inspiration of many comic books today and one of the most significant comic books to date, in large part this is not because of the character, but the storytelling and creativity of creator Will Eisner. Eisner created and pioneered many of the standards of story telling in comics used today. Personally for me it’s Eisner’s ability to convey a story without needing to read the words that draws me into this book. Eisner was a master at telling graphic stories and his work on The Spirit is a prime example of that. Not only does his art speak, but in many cases it is graphically breathtaking. 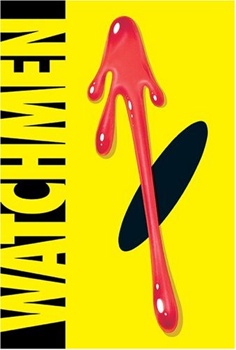 The Premise – The world is in lockdown. Many old heroes are dead or retired. Those who dare to be seen in costume are hunted down. Now the Earth’s greatest living heroes are starting to come out from the shadows and return, but someone is killing them off. This story is significant because it takes the very basis of the idea of moral judgment, right and wrong, and turns it on its ear. The question is, is a hero someone who stops something from happening just because it is wrong, or is a hero the person who let’s something bad happen to an individual in order to protect the rest of the world. The cast of characters in this story makes this book for me. Each one is unique, colorful, and in some way utterly flawed. Despite their shortcomings you find yourself cheering for these rebellious heroes, out to stop a killer and overthrow the status quo. When the truth comes to light however this story has the remarkable ability to make the reader question not only which side is right, but rethink the readers own beliefs and sense or morality. 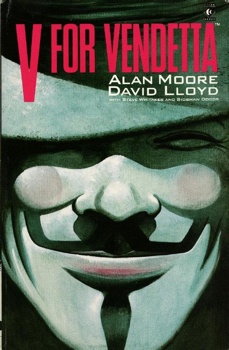 The Premise – This may be obvious to those who have seen the movie, but in the 1980’s Moore became known for his portrayal of a bleak future ruled by martial law, whose only hope comes from the individuals who choose to stand and fight for the good of the people. This book is no exception. In this story we find the mysterious V plunging the commonwealth of Britain into anarchy in order to encourage the citizens to stand-up and rebel against an oppressive government. Similar to the Watchmen this book became dear to me because of Moore’s ability to make the reader question their own beliefs in the process of being engrossed in the story. The story may take place in the future, but has many similarities to the world we live in today. The story has stayed consistently relevant for over 20 years, which cannot be said by a lot of comics. This book will definitely make you question “How far is too far to go in the name of freedom?” 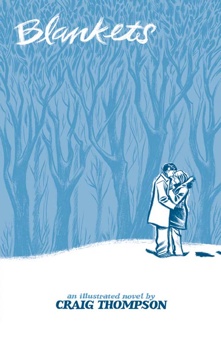 The Premise – An autobiographical story of the author’s young life and interactions with love. A deep and heart wrenching story of what it is like to sleep beside someone for the first time. The author also delves into the oppressive relationship with his parents and the need to be free to make his own decisions in life. Anyone who’s been through teenaged angst, puberty, and first love can relate to this story. I not only find myself emotionally involved every time I read this book, but also able to relate to Craig’s relationship with his parents, brother, and girlfriend Raina. 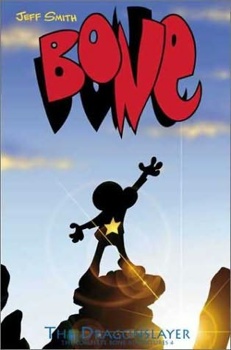 The Premise – The Bone family has been run out of their home town and ends up lost in a mysterious valley full of talking animals, former princesses, dragons, giant rat creatures, and evil cloaked men. A story that keeps you hooked throughout the entire massive edition. Recognized by educators worldwide and applauded for its kid friendly content. Now used in many school systems as a teaching aid to promote literacy. Jeff Smith has created a cast of characters that readers can easily care about, and are concerned not only about the larger story, but the small details of their daily lives and antics. The characters are lovable, including enemies such as the rat creatures, whose characters one can easily sympathize with. My highlight regarding this book is that it is a comic that parents can read with their kids and both mutually enjoy, which cannot be said for many other books on this list that have a PG-13 or R rating. 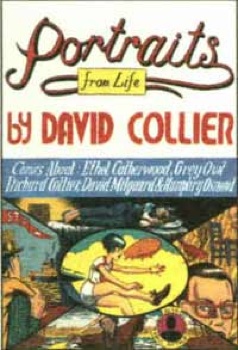 The Premise – David Collier’s works explore some of the most interesting and varied subjects in comics. Rarely does Collier produce anything fictional. Instead he gravitates towards autobiographical stories about interesting chapters in his life, as well as biographical stories about interesting and famous people in history. In one story Collier expertly blends the story of Grey Owl, a famous Native American impersonator, with his own story about his journey to find the cabin Grey Owl once lived in decades after the man’s death. I chose this book because I find Colliers ability to make you interested in topics you never thought you’d be interested in a key element to his work. Prior to reading this book I never thought I’d be interested in the life of a retired female Olympian from the 1930’s, or the life of a man who lived in the bush and pretended to be Native American, but Collier’s ability to tell an engaging story can quickly draw a reader in and help them experience things they would not have otherwise. 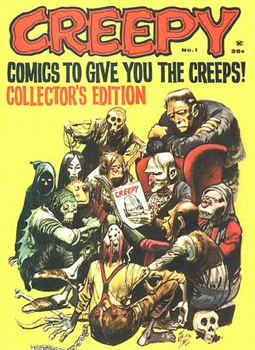 The Premise – The comics that Dr. Fredric Wertham helped ban in the 1950’s and nearly led Warren Publishing to close its doors. Today these works are considered to be some of the best of their time. Originally considered too gory for the public, they are now recognized as some of the greatest comic book literature and have inspired generations of creators since. I love these books because they used to scare the crap out of me. I had a stack of them when I was young, and used to trade them with older comic collectors for tamer fare. I wish I could go back in time. Anyway, these books are not only scary, but as an adult I am able to look back on them and see that they were also some great examples of well written fiction and proof that stories can be frightening and not always because of the gore contained in them. 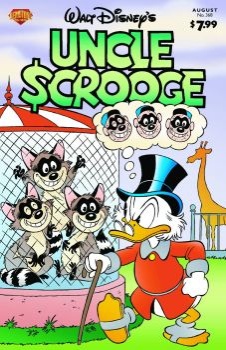 The Premise – Another comic well revered by professionals in the comic book industry. Originally created in 1953 for Disney comics. Truly ahead of his time Barks blends the ability to tell a good entertaining all ages story with the cute animated animal art usually associated with Disney. Fans will want to seek out the new series of Carl Barks Greatest DuckTales Stories currently being published by Gemstone Publishing. It is Bark’s characterization of Scrooge McDuck that has endeared the character and creator to so many fans. Readers will find the character to be a surly old curmudgeon, but ultimately a lovable one. This book could very much appeal to those who are a fan of TV shows such as House, as the characters have a number of startling similarities.
Buy this book at Amazon 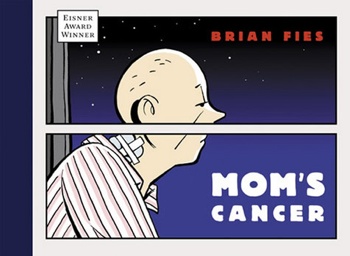 The Premise – The tear soaked biographical tale of Fies own mother and her diagnosis with terminal cancer. Through Fies own perspective he tells the story of his mother’s struggle with the terrible disease. Moving and touching this book will not only change the way you see comics, but it may also inspire you to pass it along to someone in your family who smokes. This book made me cry. No question and no shame in admitting it. There are many people around you in your life who may do things that will end up harming them, but you allow them to make their own decisions. Mom’s Cancer will make you want to plead with them desperately to stop. My own mother is a long time smoker and after reading this book I passed it along to her and told her to read it. Since then we have discussed strategies to help her quit smoking.

There are many great works that did not make this list out of a lack of space and time, but I would encourage anyone who questions the validity of comics as literature, or a comics fan who hasn’t seen them, to read just a few of these books and see if they don’t have the ability to alter you perceptions and opinions.