The Devil has been playing with our minds for centuries. No matter what you call him, The Prince of Darkness, Lucifer, Old Scratch, Beelzebub, Mephistopheles…The Devil has been deeply rooted in our psyches since childhood. Modern conceptions of the Devil include the concept that it symbolizes humans’ own lower nature or sinfulness. From Dante’s Inferno to Goethe’s Faust, the Devil is a firm character in the literature, religion and culture in almost every society on Earth.

He spans every genre, comedy, satire, and drama and is a great foil for any hero or anti hero. Now in the age of visual media, the Devil still hasn’t lost his charm. Here is a list of the Top 10 depictions of the Devil in Television and the Movies. 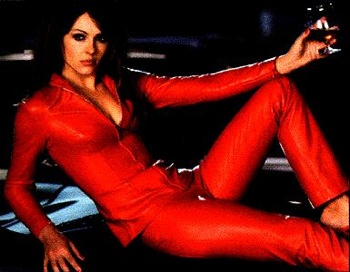 Silly movie, WONDERFUL devil! You’ve got to love female Satans. She offers Brendan Fraser’s character wishes so that he can land the girl of his dreams. But this is Satan we’re dealing with, she traps and tricks him as we would expect nothing less from the Prince, or Princess of lies. 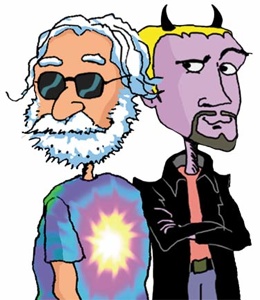 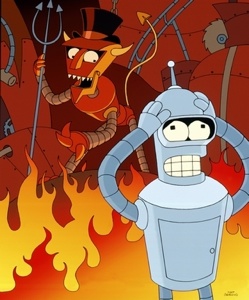 Dan Castellaneta voiced the horrifying Robot Devil in Futurama. The Robot Devil lives in Robot Hell, which is hidden beneath the “Inferno” ride at the amusement park “Reckless Ted’s Funland” in New Jersey. His function is to torment robots who have committed various sins, though it seems that this right only applies to those who practice Robotology. 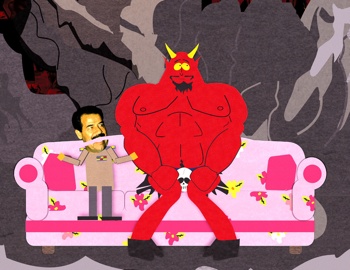 Trey Parker voices one of the most misunderstood Satans in popular culture. He presides over Hell and is constantly at war with God, but far from being merciless and innately evil as Satan is often portrayed in other media, he is depicted in South Park as a soft-hearted, misunderstood anti-hero capable of compassion and genuine emotional attachment. 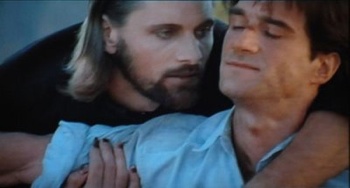 CREEPY! Before he was snogging Liv Tyler in Lord of the Rings, Viggo played a very awesome Lucifer in The Prophecy. Mortensen’s Satan is savage, and just plain vicious. Take this quote “Humans… and how I love you talking monkeys for this… know more about war and treachery of the spirit than any angel.” Well worth the rental. 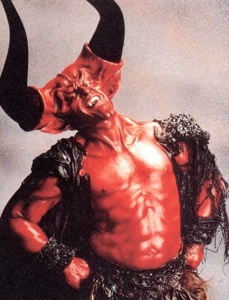 Every 80’s child remembers being freaked and enchanted by Tim’s awesome Devil. Visually stunning and far before it’s time, The Lord of Darkness stole every scene he was in. Tim’s presence and voice make for an unforgettable devil that all Gen X and Yers will remember well into their old age. 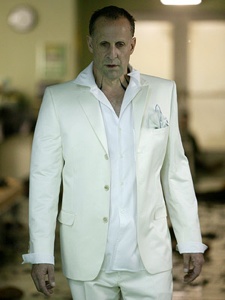 Swedish actor Peter Stormare’s Devil is perfect, dressed in white and virtually dripping with evil. So angered that Constantine is about to slip through his fingers, he pulls Constantine’s cancer from his lungs, forcing him to live his lonely life rather than be taken into heaven. Truly a Satan for the ages. 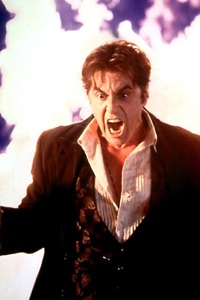 This Satan was not your usual scaly demon. He was rich, calm, suave and greedy with a lusty charm that Satan always brings to movies. Kevin Lomax, played by a more wooden than usual Keanu Reeves, takes a job at a powerful law firm where his boss, John Milton (get it?) is really the devil. Pacino was the perfect choice for playing this character. 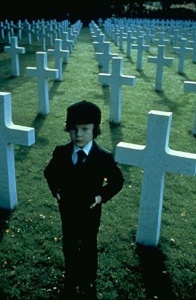 There can be no doubt that young Harvey Stephen’s portrayal of Satan as a child is one of the most chilling around. He doesn’t have to do much – just look on as things go to “hell” around him. The most disturbing scene in this movie is when the Nurse jumps hangs herself declaring “this is all for you Damien!” The follow up movie was also quite good but lacked some of the chilling atmosphere of this original.

1
Rosalinda Celentano
The Passion of the Christ 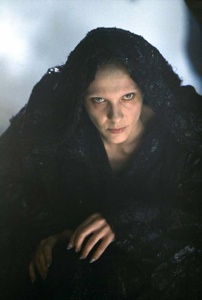 Love or hate this movie, you’ve got to admit that Rosalinda’s androgynous Satan was among the creepiest. She taunts and follows Jesus like a snake. I loved her depiction because it is unlike any other I had ever seen. Instead of being an anti-Christ, the devil is depicted here as a perversion of the Holy Family – with Satan mimicking Mary and carrying a foul child in mockery of the baby Jesus. Extremely scary stuff.