The Simpsons has become a world phenomenon, with merchandise, television shows (19 seasons), and a movie. The characters are loved by young and old and many turns of phrase coined by the show have entered common use in English – for example: Doh!

Rather than presenting a list of the main characters, this is the supporting characters – the “people” that provide the backdrop for the hilarious antics of the Simpson family. 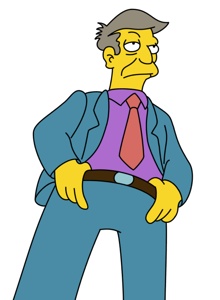 Principal Skinner who’s real name is Armen Tanzarian is the man in charge at Springfield Elementary. He tries very hard to keep control of the school while kissing superintendent Chalmer’s butt. However one mysterious student named El Barto will not let Skinner’s job be so easy. If that were not hard enough he has to deal with his overbearing mother every night and if he makes her mad he won’t be allowed to go antiquing with her. 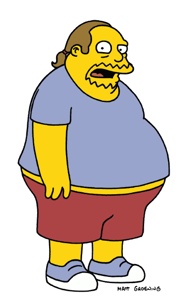 Comic book guy is the overweight proprietor of the local comic book store, The Android’s Dungeon. He enjoys marshmallow peeps and watching Sci Fi marathons and then broadcasting negative opinions via the internet. 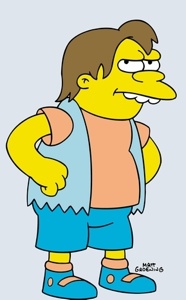 Nelson is the school bully at springfield Elementary. His favorite things to do are to pick on nerds and say “ha ha” when something bad happens to someone else. Once in a while Nelson will be friendly to the local nerds but that is only to lure them into a false sense of security.

notable episode: Sleeping with the Enemy 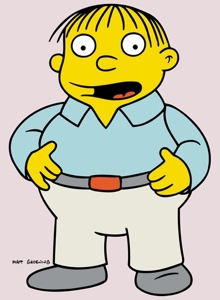 Ralph is a lovable dumb kid who happens to be the son of the chief of police. Some of Ralph’s career high lights are playing George Washington in a school play, being mistaken as a pumpkin during the hurricane and winning the school panorama contest with his unopened Star Wars action figures and then promptly breaking his wookie. 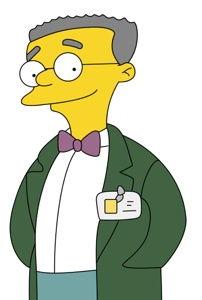 Smithers is the male apprentice to Mr. Burns, and he loves his job very much. Although Smithers is morally opposed to the many evil things his boss does, he loves him too much to let him know. Smithers is also an avid collector of Malibu Stacy dolls. 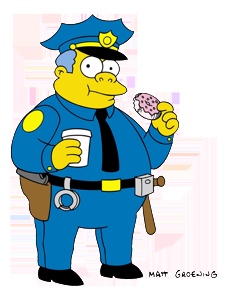 Chief Wiggum is the local police chief and he takes his job very seriously… just kidding! Wiggum is a portly, pig snouted cop who believes the law is powerless to help people but not to arrest them. 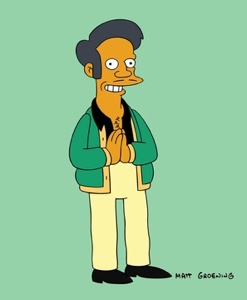 Apu is the owner and operator of the Kwik E Mart. He is of Indian descent. His hobbies are working and selling overpriced goods. Apu and his wife have eight children. His favorite saying is “Thank you come again”. 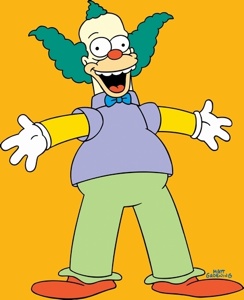 Krusty is the sleaziest, most foul mouthed clown on T.V. and he happens to be the idol of Bart Simpson. Krusty is a jewish clown who always loved to make people laugh unfortunately his Rabbi father disapproved and disowned him for his career, but thanks to Bart and Lisa they were able to come to terms. Krusty is famous for his signature greeting “hey hey”. 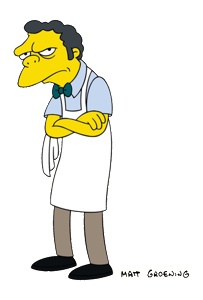 Moe is the local booze jockey of his own bar, Moe’s. Moe is a very ugly guy who can never seem to find the right woman. This could be because he is rude, crude and most of all really ugly. 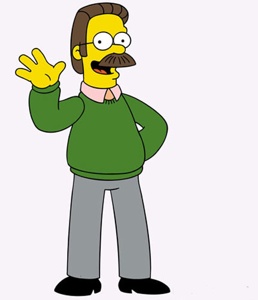