The most famous road in America is full of offbeat attractions, weird photo opportunities, and cheesy tourist traps. Here’s another 10 places to “get your kicks on Route 66”. In no particular order: 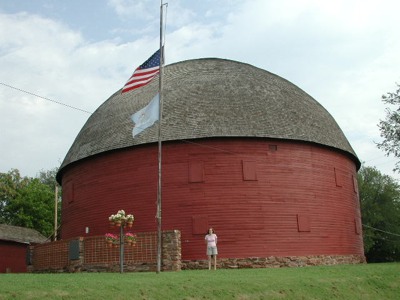 In 1898, William Odor and his family built an architectural wonder. To achieve the barn’s unique round shape, green lumber was soaked in water and molded to fit the exact curve of the roof. The lower level was used for animals, and the loft was host to dances and social events. In 1988, the barn was donated to the local historical society, who restored it. Today it is a visitor’s center. 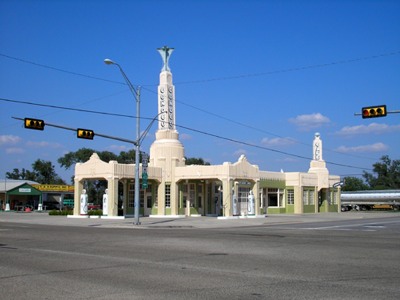 By far, one of the most recognizable structures on the route. In the 1930’s, the owners of the lot were approached by some investors and offered a custom designed building in order to cash in on the coming flood of travelers. The owner of the land grabbed a stick and drew in the dirt his idea for the building, and the U-Drop Inn was born! The U-Drop Inn functioned as a gas station and cafe and is currently being restored. 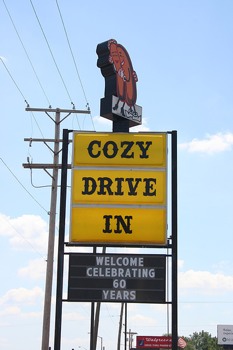 The birthplace of the corndog- the original hot dog on a stick. The Cozy Dog Drive In was founded by Ed Wildmire, father of eccentric artist Bob Wildmire, who is best known for his map murals depicting Route 66. According to their website, if you can’t make it to the Cozy Dog, for $20 they will ship you 5 pounds of Cozy Dog flour, instructions, and sticks to make delicious Cozy Dogs at home! 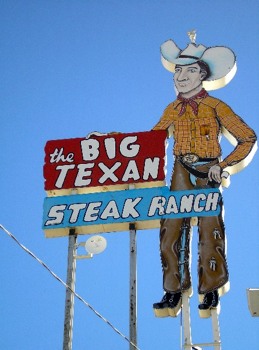 The long-legged cowboy has beckoned travelers off Route 66 since 1960. If you can eat all 72 ounces of a top-sirloin steak, as well as a baked potato, salad, roll, and shrimp cocktail in one hour- it’s free! According to the Big Texan’s website, 60,000 people have attempted the feat and about 8,500 have succeeded. The youngest to do it was an 11 year old boy, and the oldest was a 69 year old grandmother! 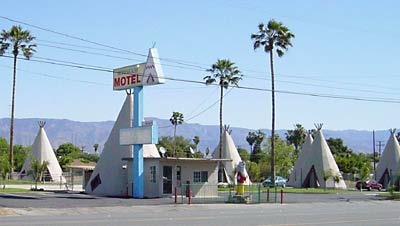 At one time, there were seven Wigwam Villages, but only three survive. For a while, the one in Rialto, San Bernardino was very run down and rented by the hour. They even had a sign that read “Do it in a Tepee”. After an extensive restoration, it is family-friendly once again. The other Wigwam Village is in Cave City, Kentucky. I have stayed there, and it was a blast from the past! 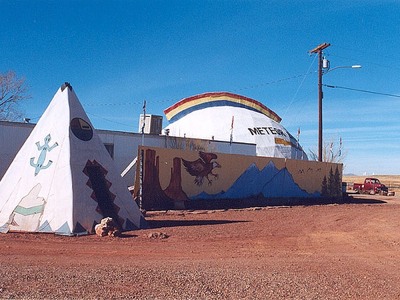 Just past Winslow, Arizona, you’ll find Meteor City- population: 2! It’s not really a city, its a souvenir stop next to a big meteor crater. The crater was formed approximately 50,000 years ago, resulting in the formation which is about 4,000 feet wide and 570 feet deep. The tourist stand is home to the world’s largest dream catcher, as well as the largest map of Route 66, drawn by the aforementioned Bob Wildmire. 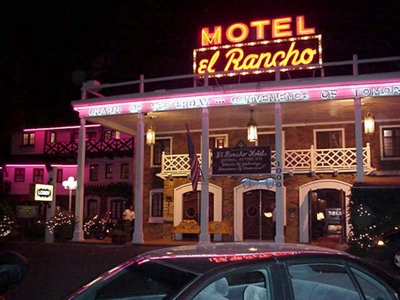 In 1937, The El Rancho Hotel was built by the brother of movie executive, D.W. Griffith. Many movies were filmed in the area, and the El Rancho was a home away from home during shooting for stars including Marilyn Monroe, Ronald Reagan, Errol Flynn, and Kirk Douglas. 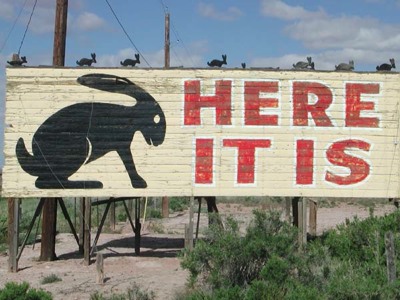 The most famous Stop-n-Go convenience store in the world! For many miles before you get close to Joseph City, the highway is dotted by iconic billboards with nothing more than the silhouette of a jackrabbit. In front of the store was another billboard with “HERE IT IS” written on it as well as a large fiberglass jackrabbit. 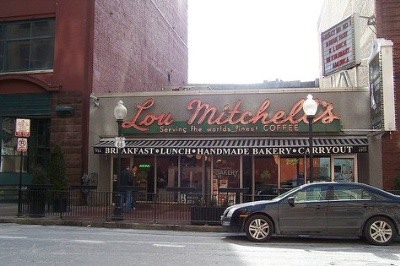 When I visited Chicago a few years ago, it was February and freezing cold. The line to get in to Lou’s stretched down the block. To make the wait bearable, the staff passed out donut holes and coffee to the customers. It was SO worth it! The omelets were huge and delicious, the service was friendly and at the end of the meal, the ladies get a box of Milk Duds. Sweet!

1
The Leaning Tower of Groom
Texas 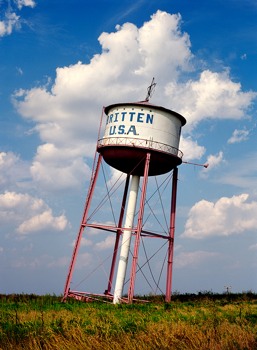 Ralph Britten constructed this water tower to lean in order to catch the eyes of the tourists who would stop and ask questions. While they were there, they’d spend money at the truck stop and restaurant nearby. Unfortunately, the restaurant burned a few years ago, but the tower remains as a great photo opportunity. As for why the tower says “Britten” instead of “Groom”, the Brittens are a large family that has lived in the area for a long time.