As you probably all know, I am a huge fan of fine dining and cooking. This list looks at ten restaurants that are less fine than they are bizarre. So next time you are looking for an unusual evening out, be sure to check out one of these restaurants. If you have any experience of any of them, be sure to let us know. 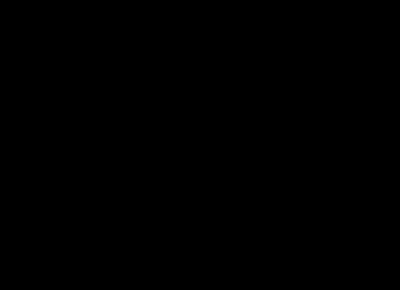 Dans le Noir means “in the dark” in French, and that is exactly how you eat at this restaurant which can be found in Moscow, Paris, and London. According to one review: Nothing can prepare you for the uniqueness of Dans Le Noir? It works like this; you meet in the tall-ceilinged entrance bar, put your phones and anything else that might emit light in a locker, then order from the ‘surprise’ menu where you don’t know what you’ll get. Then you’re led through three sets of black drapes and to your table. You can’t see a thing. Nothing. Leaving you to rely wholly on the remaining four senses, and the blind waiter or waitress assigned to you. You’ve never tasted food like this before, that’s for sure. And because you can’t see who’s next to you, everyday judgments and fears are removed and chatting to your neighbors becomes irresistible. 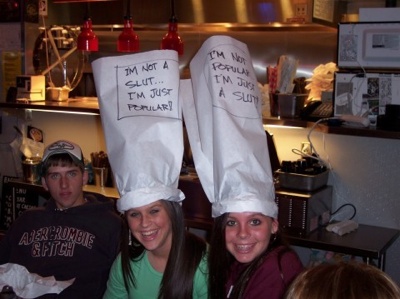 Dick’s Last Resort is a small bar and restaurant chain in the United States, known for its intentional employment of an obnoxious staff and the use of vulgar decor. The chain consists of seven restaurants, including one near Petco Park, California and another inside the Excalibur Hotel and Casino, Las Vegas, which is affectionately referred to as “The Shame O’ The Strip”. The restaurant, which uses picnic-style tables and no tablecloths, has its origins in the owners’ original opening of a “fine-dining” establishment. The establishment was a failure, which resulted in bankruptcy. Rather than continue with the upscale restaurant motif, the owners retooled their efforts and decided to “go sloppy”. Patrons of Dick’s are expected to be insulted, or placed in uncomfortable situations. Adult bibs and larger paper hats, representing condoms in their shape, are given to diners to wear during their stay. While there are no napkins on the tables, they are generally thrown directly at the customers by the serving staff. [Image Source] 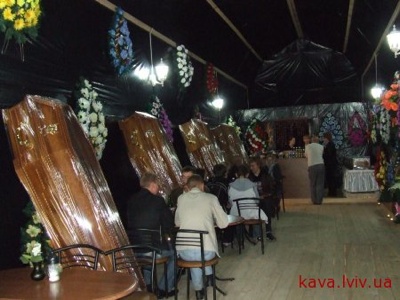 The coffin restaurant, called Eternity, is the work of a funeral parlour in the town of Truskavets, in the west of the country near the Polish border. The undertakers hope that their restaurant will be confirmed as the world’s biggest coffin, attracting tourists to a region best known for its mineral-rich bathing waters. Morbid diners can browse the funeral paraphernalia before ordering from a menu that includes “Nine Day” and “Forty Day” salads – named after local mourning rituals – and an ominous-sounding dish called “Let’s meet in paradise”. Single candles on the tables contribute to the funereal mood.

7
Dinner In The Sky 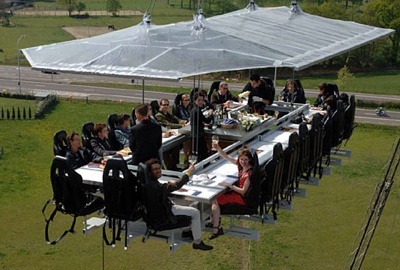 Dinner In The Sky is for people who expect more from their restaurants than four concrete walls and a solid floor. Instead, diners perch around a massive table, which is suspended from a crane high up in the air. It sounds completely insane, but as the most unusual – and entirely legal – way of getting high over dinner, it is the new must-do experience for the super-rich and adventure-hungry who yearn for something a little more extreme at mealtimes. Although based in Belgium, the “restaurant” can be driven to any destination in the world. There have already been dining events in Paris and Brussels, while New York and Niagara Falls are on the agenda. 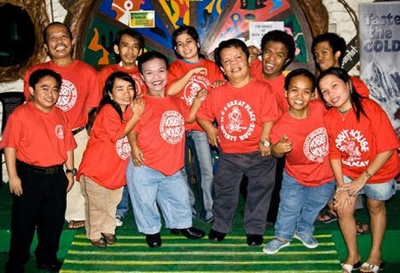 Located in Manila’s one?time red light district Malate, the Hobbit House, found at 1801 Mabini Street, at the corner of Remedios Street, is staffed entirely by midgets. Billing itself as The only restaurant in the world owned, managed and staffed entirely by Hobbits, the Hobbit House has managed to survive in an ultra?competitive area with its unique offer of fine dining, diverse offerings of live music and, of course, its unforgettable staff of Hobbits. 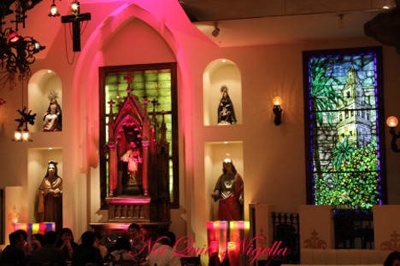 In Japan, Christianity is still a novelty, so they’ve turned it into a theme-restaurant in Shinjuku. This place looks like a church and is full of religious imagery and statues, which makes it an unorthodox venue for knocking back cocktails. Worth a visit, (but you might feel compelled to behave yourself.) Christian Cafe is decorated with statues of saints, the Virgin Mary and thing mostly commonly found in Catholic churches. 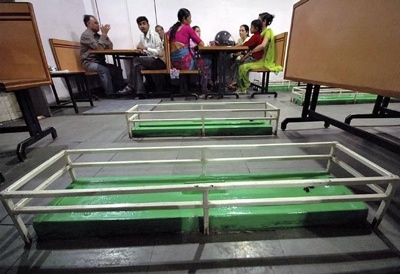 The bustling New Lucky Restaurant in Ahmadabad is famous for its milky tea, its buttery rolls and the graves between the tables. Krishan Kutti Nair has helped run the restaurant built over a centuries-old Muslim cemetery for close to four decades, but he doesn’t know who is buried in the cafe floor. Customers seem to like the graves, which resemble small cement coffins. The graves are painted green, stand about shin-high, and every day the manager decorates each of them with a single dried flower. They’re scattered randomly across the restaurant. The waiters know the floor plan like a bus driver knows his route, and they’ve mastered the delicate dance of shimmying between graves with a tray of hot tea in each hand. 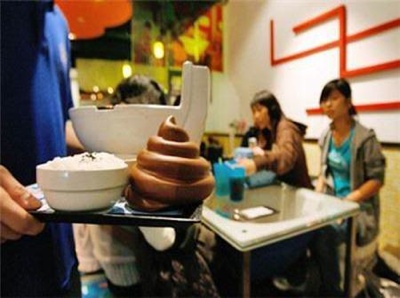 At Modern Toilet, a restaurant in Taiwan, every customer sits on a stylish acrylic toilet (lid down) designed with images of roses, seashells or Renaissance paintings. Everyone dines at a glass table with a sink underneath. The servers bring your meal atop a mini toilet bowl (quite convenient, as it brings the food closer to your mouth), you sip drinks from your own plastic urinal (a souvenir), and soft-swirl ice cream arrives for dessert atop a dish shaped like a squat toilet. According to the manager, “it’s supposed to shock and confuse the senses”. 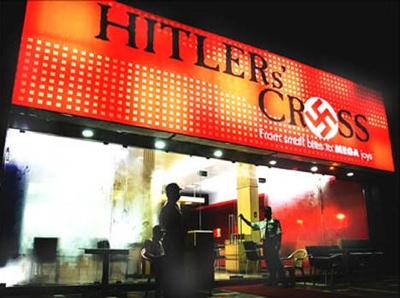 Hitler’s cross a cafe in Mumbai, India, complete with swastika logo was the brainchild of Puneet Sabhlok, a novice restaurateur, who said he wanted a catchy café name to sell his $3 to $4 plates of crostini tonno, pear & ricotta salad and pannacotta. So he went with Hitler’s Cross. “Hitler is a catchy name. Everyone knows Hitler,” he explained in an interview. After intense pressure from the ADL, German & Israeli diplomats, and India’s Jewish community, the cafe’s name was changed to “The Cross”. 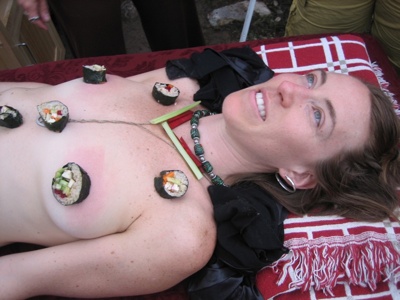 In Japan there are many restaurants that follow the Nyotaimori practice of serving food on human bodies – usually naked. Before becoming a living sushi platter, the person is trained to lie down for hours without moving. She or he must also be able to withstand the prolonged exposure to the cold food. Body hair, including pubic hair, would also be shaved, as a display of pubic hair may be seen as a sexual act. Before service, the individual would take a bath using a special fragrance-free soap and then finish off with a splash of cold water to cool the body down somewhat for the sushi.