Nothing in space beats the strangeness of a black hole. The most educated scholars struggle to explain why normal physics fails around them or what happens inside these all-consuming monsters.

Every year, the enigmatic phenomenon reveals weird and frightening clues about its true nature. Time reversal, black holes from a dead universe, and the first glimpse of forces stronger than them are just a few of the latest discoveries. 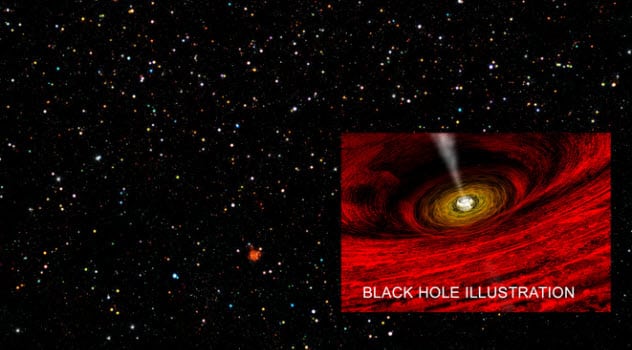 Midsize black holes are the mysterious middle child of the family. They are neither as small as the abundant stellar-mass black holes nor as big as the supermassive ones. Called IMBHs (intermediate-mass black holes), they are so scarce that some scientists consider them to be missing.

In 2018, their hiding place was revealed. For unknown reasons, IMBHs lurk at the center of small galaxies. Once scientists knew where to look, the rare black holes turned up in swarms.

Usually, a supermassive black hole resides in the middle of a star cluster. The rule weakened as more dwarf galaxies were found swirling around IMBHs. However, with their numbers on the increase, so is the possibility of solving a related mystery.

Scientists still cannot explain how certain supermassive black holes bloomed so shortly after the big bang. Thus far, the information gleaned from IMBHs supports the existing theories about supermassive births—they grow from IMBHs or when giant gas clouds collapse. Although this does not solve the riddle, it counts as confirmation that scientists are heading in the right direction.[1]

9 Mystery Objects Near Sagittarius A* 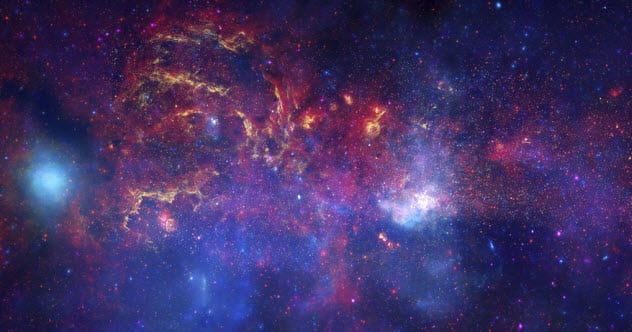 Sagittarius A* is the supermassive black hole at the center of our galaxy. In the early 2000s, two mysterious objects were discovered orbiting around it. Called G-class objects, they behaved like gas clouds and were expected to die as they were approaching their closest point to Sagittarius A*. When they endured, the real riddle began.

Gas clouds could not survive a turn so close to a supermassive black hole. In 2018, researchers found three more in close orbit around Sagittarius A*. Picking apart data from the past 12 years could not conclusively identify them as G-class objects, but this is likely the case. They appear puffy like gas but behave like stars with tremendous mass.

This was exactly what scientists thought the first two probably were after they did not die—stars. Stars in orbit may sound strange, but it gets more unusual.

Once, they were binary (two stars that circled each other). However, the gravity of Sagittarius A* caused them to merge violently and take on a swollen appearance, which fooled scientists into “seeing” gas clouds. Nothing is settled, though. Not all the objects have the same orbit, and this suggests different creation stories.[2] 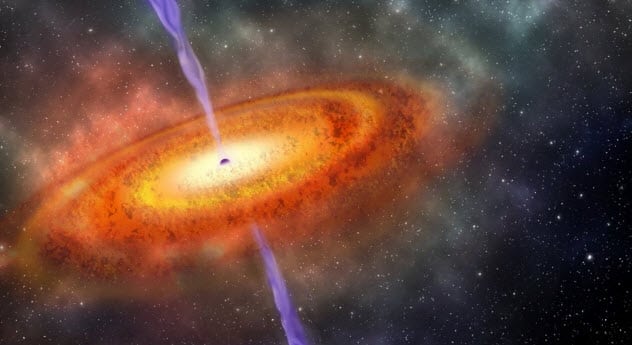 The discovery of the most ancient black hole in the universe is not just about age. This granddad could solve long-standing mysteries about the epoch when stars switched on for the first time.

Found in 2017, the supermassive entity formed 690 million years after the big bang. When the cosmos was a mere 5 percent of its present age, the black hole was already 800 million times the mass of the Sun.

ULAS J1342+0928 is about 13.1 billion light-years from Earth and was formed during the early years of the cosmos. Called “the epoch of reionization,” this specific period occurred when the first stars evolved from ions and gravity. The true cause behind the reionization remains unsolved, though black holes remain suspect.[3]

In addition, nobody can explain how they could become so massive in the early universe. ULAS J1342+0928 might throw light on these issues, but more black holes from this epoch are needed to get real answers. Unfortunately, black holes from that time are exceedingly rare. 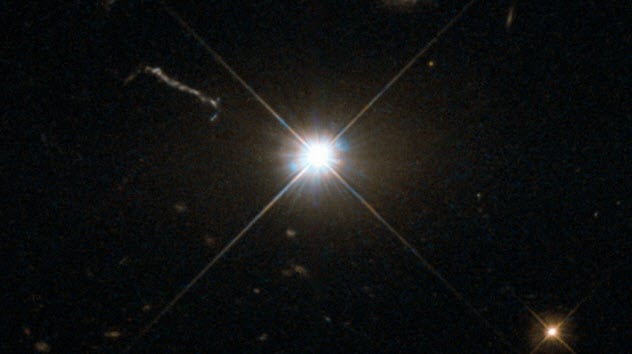 In 2018, the hungriest black hole entered the record books. Due to its appetite of slurping the equivalent of Earth’s Sun every second day, it is also the fastest growing. Luckily, it is very far away. If this monster was at the center of the Milky Way, its X-rays would sterilize Earth of all life.

When scientists discovered the first twinkle, they were seeing light released 12 billion years ago. Once the source was confirmed as a black hole, its stunning mass soon became apparent—about 20 billion suns’ worth. Researchers simply do not know why this particular black hole is expanding so rapidly.[4]

The only known fact about its growth makes this hole anything but black. Due to the huge volumes of incoming gas, the friction and heat could easily outshine an entire galaxy. In fact, thousands of times more. Again, if this space freak resided in the middle of the Milky Way, the glare would cause humans to see nothing but a few stars. 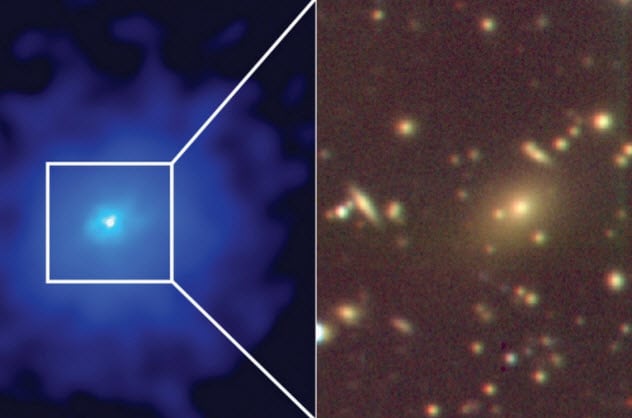 A single galaxy cluster can hold hundreds or even thousands of galaxies. These clusters are considered to be the biggest pieces in the universe. One might think it impossible for a cluster to be hidden by a single space object. However, that is exactly what one quasar did.

This supermassive black hole was tagged as PKS1353-341 and filed away as a lone entity in its region. In 2018, MIT scientists released a photo that showed the truth. The quasar sat at the center of a galaxy cluster. The black hole was exceptionally bright, and the radiance blotted out the light of millions of stars. No other galaxy has been hidden in this way.[5]

Located about 2.4 billion light-years from Earth, the quasar’s glare likely comes from a feeding frenzy. It is believed that PKS1353-341 consumes matter at an exponential rate, releasing enough energy to burn 46 billion times brighter than Earth’s Sun. Astronomers expect it to settle down in a million years or so. 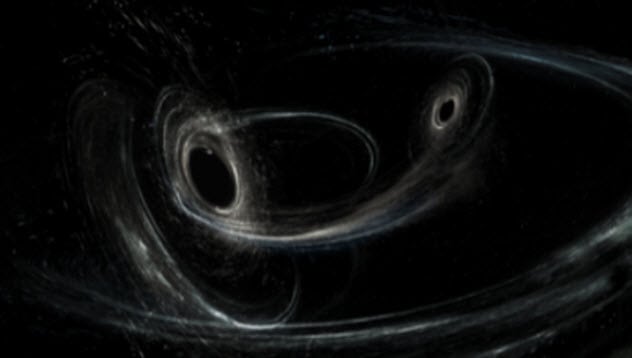 Another unsolved aspect of black holes is that some appear as binary, or a pair in orbit around each other. This is dangerous living. So far, three cases of black holes colliding have been documented. Two were detected in 2015 and another in 2017.

Amazingly, the latter’s signal consisted of gravitational ripples from a split-second smash three billion light-years away. Neither was destroyed but instead blended into a single black hole bigger than both of its two parents.

This third merger was an important one for researchers. It provided another case of a rarely seen event and also helped to solidify a new observational science regarding gravitational waves.[6]

As to how binary black holes form, researchers consider two likely scenarios. Binary stars might die and leave behind the black holes. Alternatively, they formed separately and only later drifted closer to each other and became gravitationally bound. 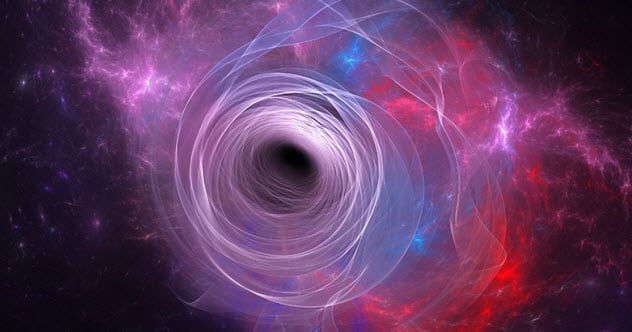 In 2018, physicists added another way that black holes could theoretically obliterate Earth. Recently, the scientific world celebrated the discovery of gravitational waves—a phenomenon that stretches and compresses the fabric of reality. It sounds crazy enough, but the fact is that this is also a deadly force.

The new theory looked at gravitational waves moving away from a high-energy collision event as a bubble. Spreading at the speed of light, it grows larger until some points resemble flat surfaces. If two bubbles collide at a flat-surface point, the worst-case scenario suggests that space-time would likely concentrate into a black hole.

If this happened near Earth, it would be catastrophic. On the plus side, if it could be called that, nobody would die a strange death down the new black hole. The gravitational waves behind its formation would fatally stretch the planet to shreds first.[7] 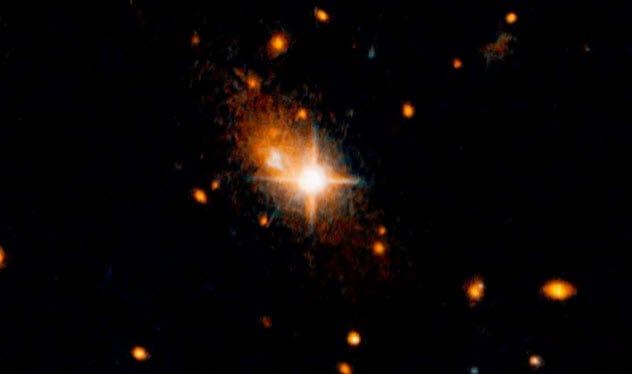 Scientists have always entertained the possibility that galaxies can eject their central black holes. However, no proof of this was ever found. Then, in 2017, a galaxy called 3C186 delivered a surprise.

The result of two galaxies that merged at some point in the past, 3C186 should have appeared a little messy. Instead, it was well-defined and settled. The real surprise came when researchers searched the center for the usual supermassive black hole. Nothing was there.

When they found it, the black hole was over 35,000 light-years from the center. As the two star clusters collided, so did their supermassive centers. This created a monster-sized black hole. The merger likely released gravitational waves powerful enough to eject the new hole.

This was no small feat. To swat the black hole aside, an energy burst equal to 100 million supernovas was needed. Whatever happened, it provided the first glimpse at forces stronger than the dominance that black holes famously display over their territories.

The unique behemoth continues to reel at breakneck speed. At its current pace, the black hole can leave the galaxy for open space in about 20 million years.[8] 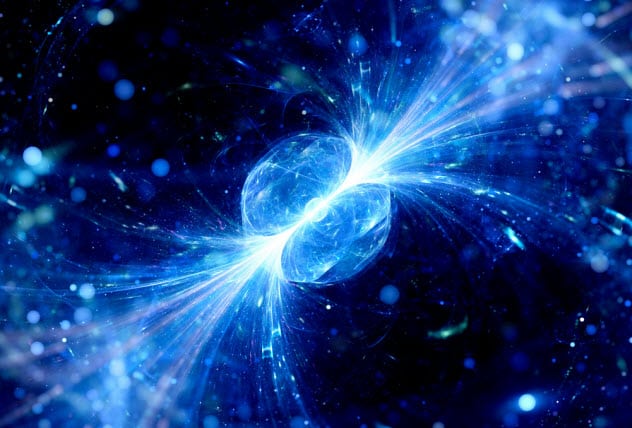 A black hole is created when a huge star dies and collapses in on itself. At that moment, the event shoots out streams of gamma rays. The latter is the brightest force known in nature and is still not fully understood.

In 2018, the mysterious signals revealed another strange skill—they appear to reverse time. Scientists discovered this when they studied the six strongest gamma-ray bursts recorded by NASA. Each event shot out a light wave with a signature pulse sequence. Oddly, the gamma ray was then repeated with its pulse sequence reversed.

This may not sound weird, but nothing is normal around a black hole. For some physicists, the backward signal is a sign of time reversal. The cause is a complete mystery.[9]

Alternative suggestions look at the more material level of matter. The gamma ray could be moving through clumps of matter, which creates the signature. To reverse it, the beam could be hitting an unknown mirrorlike surface somewhere or behaving according to an undiscovered physics law. 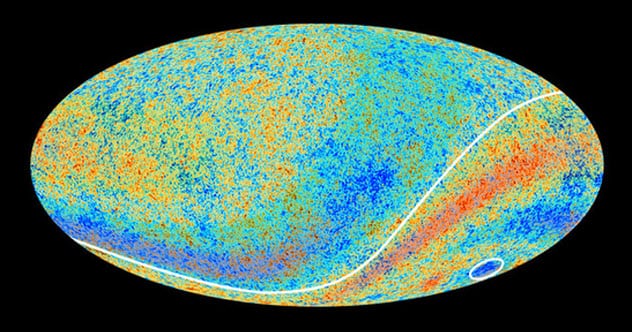 In 2018, a controversial physicist claimed something spectacular. Roger Penrose had already raised the wrong eyebrow among neuroscientists when he claimed that human consciousness was the result of quantum computing. Now, Penrose believes that ours is the latest of a series of universes. More to the point—that black holes from dead universes can be detected in the one that exists today.

This theory hinges on something called Hawking radiation. Stephen Hawking famously suggested that black holes eventually disintegrate after losing enough particles. Called gravitons and photons, they are massless and do not experience conventional speed and time

As a result, when a universe dies and a new one forms, like-minded scientists argue that these particles survive. The part detected is Hawking radiation, or the energy that black holes spent dissolving themselves in the long-gone cosmos.

Experiments returned positive results, which strengthened Penrose and his supporters’ call to modify the big bang theory. If they are correct, instead of a bang that formed only the one cosmos, universes follow on each other like rising bubbles.[10]

Read more fascinating theories about black holes on 10 Eerie Theories On What Happens Inside A Black Hole and 10 Ways Black Holes Continue To Surprise Us.