Recreational drug use is incredibly common around the world and it very often leads to disaster and crime. To resolve this, some people advocate a liberal approach to legalization, while others support a strong government police drive “war” on the sale and use of drugs. This list looks at ten of the most popular recreational drugs in use today. 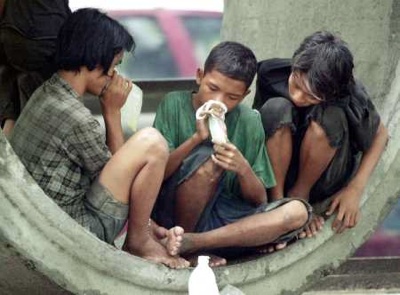 Solvents are an extremely distasteful class of abusive substances. Readily available from hardware stores, solvent abuse was popularized in the late seventies as the drug of choice of the Punk Rock scene. The industrio-chemical nature of solvents, especially solvent glue, was a strong representation of the Punk vision. Other solvent inhalants include aerosols, nail varnish, gas lighter fuel and petrol.

The general availability of these products makes them popular among poor or destitute children around the world. For the equivalent of 10 cents, a street kid in Casablanca, Morocco, can buy a small tube of bicycle inner tube repair glue, enough to take him out of the world that he inhabits and into a feeling of contentment and warmth. This is a familiar story all over the world and is indicative of the depravity that generally associates itself with solvent abusers. Often the glue is inhaled from a plastic bag, sometimes over the head, it is not difficult to imagine how often an unconscious user has died of suffocation in this process. 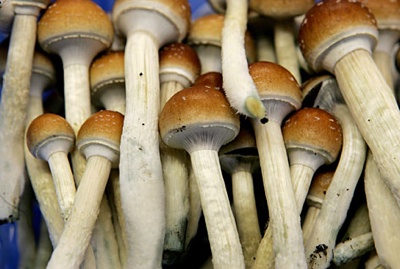 For millennia, Psychedelic or hallucinogenic mushrooms have figured in society, culture and religion. There are more than 180 species of mushrooms which contain the psychedelics Psilocybin or Psilocin. They have a long history of use in Mexico and tribal societies and are currently one of the most popular and commonly available natural psychedelics. Psilocybin and Psilocin are the psychoactive ingredients responsible for the hallucinatory state or “trip” the user experiences some twenty minutes after consuming the mushrooms. The effect of which is similar to that of LSD but shorter lived and will be outlined in the LSD section.

Some of these “Magic Mushrooms”, are actually more poisonous than they are hallucinogenic, great care must be taken to pick the correct types. In fact it is a rule of thumb with users that you should never pick them without being accompanied by someone who has picked them before. In the United Kingdom, taking or possessing ‘shrooms, is legal, but preparing them including drying them or selling them is an offense under the misuse of drugs act. The Netherlands, in recent years, has made the possession of Magic Mushrooms totally illegal, which may surprise people who are aware of its relaxed laws on Cannabis. Magic Mushrooms can be dried, eaten fresh, cooked or boiled into a “tea”. 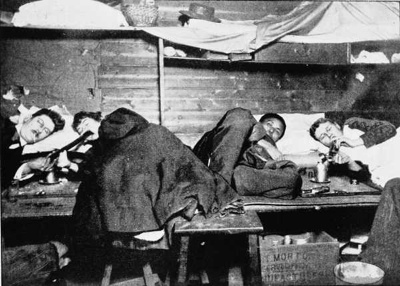 An age old drug, Opium has influenced the economy of nations, caused wars, inspired poets and brought the ruin of many. Derived from the collected sap of the Opium Poppy (Papaver Somniferum), it has been cultivated since Neolithic times. Used as a food source, the seeds have no narcotic effect but are used as spice, they have a mild nutty flavor. In contrast, the sap, collected from immature seed pods, has extremely powerful narcotic qualities. The plants are native to Greece and China, and were grown in Egyptian, Roman and Minoan civilizations. The sap is a highly addictive painkiller which can be smoked or eaten, and when dissolved in alcohol (commonly known as laudanum) it can be drunk.

Laudanum’s biggest clam to fame was its use by the romantic poets. Many of the Pre-Raphaelites (Among them Lord Byron, Shelly and others) were know to indulge. The image of the romantic poet, pale, morose, drunk on absinthe and laudanum is a common one. It was, in the Victorian era, freely available and somewhat cheaper than gin and became a working class tipple. It was liberally prescribed to children that were teething. Opium dens were popular in most 19th century cities. Patrons would lie on their side with long wooden pipes, the bowl upturned over a smoking ball of opium. 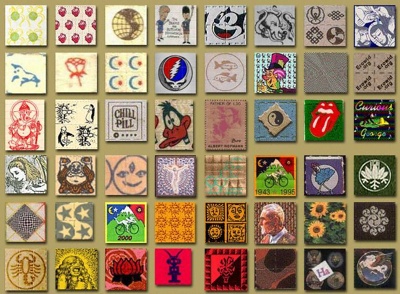 LSD (Lysergic Acid Diethylamide) is possibly the most powerful hallucinogenic drug known. It was discovered in 1938 by Albert Hoffman a Swiss chemist, whose actual purpose was to find a cure for the common cold. It has had a checkered history to say the least. Iconic public figures have, in the past, advocated its use: Hunter S Thompson, The Beatles, and Timothy Leary being notable advocates.

After 1-2 hours of ingesting the drug, visual awareness is heightened, sounds become enhanced, emotions and physical sensations are altered. The user’s sense of self and its interaction with people or objects, their concept of reality is generally brought to question. Strange visual stimuli, that may or may not be comforting or frightening overwhelm the user, there is a real risk of irrational fear taking over, paranoia, confusion or panic. Equally, some people have apparently wonderful experiences with none of these symptoms. 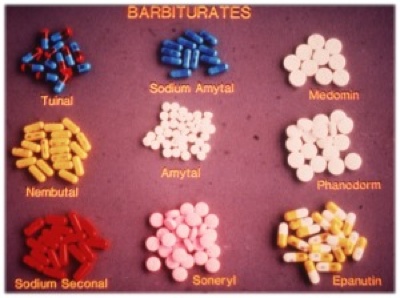 This is the first item on our list that is a prescription medicine. There is a vast range of medicines that fall in to the category of “downers” This being the street name which has passed into general usage. Barbiturates have been around since the 19th century, derived from Barbituric acid, there have been hundreds of derivatives over the years. In psychiatry and psychiatric hospitals it was frequently used to sedate violent or disturbed patients. They are a Hypnotic, and Anxiolytic, which is often used to make a patient unconscious before the true anesthesia is administered. They engender, in the abuser, feelings of calm and relaxation, physically and mentally, which creates a high level of dependency.

Barbiturates have largely been replaced by Benzodiazepines. A newer range of sedatives that was first introduced in the 1950’s as Librium. Valium soon followed with Mogadon Ativan, Frisium, and Temazepam. Safer than Barbiturates, Benzo’s soon gained popularity and the sedative culture as it was known was born. The withdrawal from Benzo dependency is extremely disturbing for the patient and recognizably bad for the doctor to witness. It has been said that it is worse than withdrawal from Opiates. Amphetamines are a group of stimulant drugs that work by affecting the amount of dopamine and serotonin in the brain. They generally create a feeling of euphoria, mental focus and resilience against physical fatigue. They have been used medically as an appetite suppressant, to treat ADHD in adults and children, and by the military in the Second World War. The most common street name for Amphetamines is “speed” because of the increased energy that users display. This made it extremely popular amongst young people in the 1970s at discos and then again in the 90s in the subsequent rave music culture.

It was originally widely available in America as Benzedrine, an inhalant medicine available without prescription, until its use was controlled by the FDA in 1965. Previous to this, the German military during WW2 used it recreationally and strategically, Adolph Hitler was daily injected with a compound of Amphetamines and vitamins. 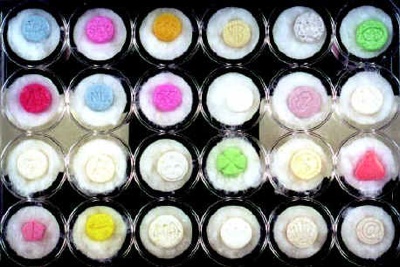 Closely linked to the use of Amphetamines (from which it is derived), Ecstasy, or MDMA, was originally used as a Psycho therapeutic drug. It is a Psychedelic drug that produces euphoria and a feeling of well being, decreased levels of fear and anxiety and a physical stimulant and sensational effect in users. It is illegal in most countries and is one of the most widely used illicit drugs in the world.

It is taken orally or sniffed as a powder. Users can have bad reactions to the drug and in the early years of its use as a recreational drug there were many instances of first time users dying without having administered an overdose. When users are exerting themselves heavily, there is a real risk of dehydration and death or illness resulting from it. Many of the “back street” MDMA factories use unclean processes and poor pharmacological techniques, and are a great danger to the people that make the drug as well as to the users. 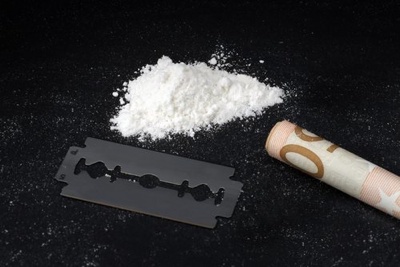 Cocaine, derived from the Coca plant, has been used in one form or another for over a thousand years. Originating from South America, it has been chewed as a leaf by the Peruvian Indians for centuries. It is a powerful stimulant, appetite suppressant and anesthetic. In the Victorian era, many freely available medicines contained Cocaine for use with babies and children particularly when they were teething.

For the first twenty years of its production Coca Cola contained Cocaine but the laws controlling it in the early 1900’s prohibited its inclusion. It has generally through its social usage been a rich mans drug, although the use of Crack Cocaine, a modified version of the original powdered form is prepared as a “Rock” or “Stone” and smoked in pipes, has brought its usage down to street level. 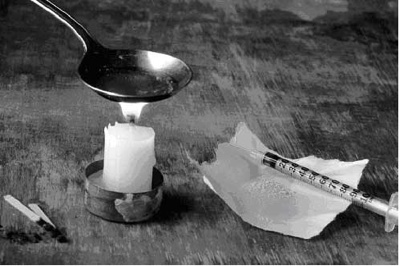 Perhaps the most insidious of all drugs, Heroin, or Diamorphine is a derivative of Morphine, an opiate, first used as an alternative to Morphine as it was thought to be less addictive. The name Heroin, is a Trade name for Diamorphine and was used by the Bayer pharmaceutical company in the mid 1800’s. It is an extremely powerful painkiller and users experience exhilaration, euphoria and a sense of well being. It can be smoked, sniffed or injected.

The withdrawal effects of Heroin are pretty dreadful, and it is virtually impossible to impart to a non-user how bad it really is. The symptoms of withdrawal are physical pain, nausea, stomach cramps and diarrhea, shaking twitching and a very strong craving for the soothing effects of the drug. Very few people can cope with withdrawal and this drives people to commit crimes to fund their next drug purchase. 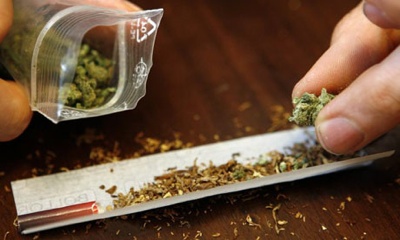 The most popular of all recreational drugs, Cannabis, or Marijuana, Grass, Hemp, Weed, Pot, Hash, Dope or a variety of regional names has been cultivated for thousands of years. Derived in various forms from the Cannabis plants Cannabis Indica or Cannabis Sativa, it is native to central Asia but its cultivation and use is global. It is a Psychoactive and a Psychedelic. It can be smoked as leaves or flower buds, it can be ground down to isolate the crystallized sap and then pressed into a solid, or the resin extracted by collection via contact with the sticky plant parts.

The effects are fairly immediate, a slightly drunken but euphoric sensation, it can be mild or strong according to the method of delivery and the strength and quantity of the dose. It is not generally debilitating unless as with anything else it is taken to excess, and it can cause some mental confusion that is mostly temporary.